What Good are EOPs that Don't Deliver? 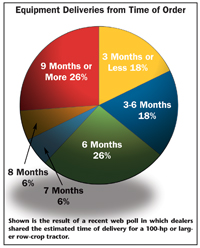 Few dealers will argue with the value of effective "asset management" by way of less inventory, more turns and more early orders. But what has them most concerned about manufacturers pressing them to pre-sell is when suppliers renege on promised delivery dates or push deliveries out to what customers consider unreasonable.

This, they say, undermines the ability of the retailer to sell the early-order concept and is chipping away at the credibility of the manufacturers.

In the longer term, some dealers believe the equipment shortages of 2008, along with failing to deliver "as promised," is eroding the "brand loyalty" and goodwill that has taken manufacturers and their retailers decades to establish.

They've begun asking, "What good are EOPs if suppliers aren't delivering as promised on pre-sells anyway?"

"We can't get most products that we need," says James Sommer, Service Motor Co., Dale, Wis. "Even tractors that were ordered last December won't be delivered until fall instead of spring. This will be a problem this year and next year."

In a recent web poll conducted by Farm Equipment, more than 60% of dealers say it's taking 6 months or longer to receive delivery of a standard row-crop tractor (100 hp or larger) these days. Nearly 38% report that it's taking 7 to 9 months to get delivery following placement of an order.

"The majority of our equipment must be ordered 6 months ahead of time," says Ian Bunbury, Avenue Machinery Corp., Abbotsford, British Columbia. "Most manufacturers and distributors have little or no inventory waiting. It's been this way for a little more than a year and there's little doubt that this is the trend of the future."

Many, if not most, of the dealers who responded to Farm Equipment's survey on equipment availability say long delivery schedules might be acceptable if they could count on delivery dates that were at or anywhere near those promised. They're reporting that shipments even on pre-sells may take a year or more, despite shipping dates that were originally scheduled for 90 days or less.

"We've had many units that have been on order since last fall and aren't projected for delivery until next fall or winter. At the time of order, the projections were 90 days," says Kari Mitchell of Mobile Ag & Industrial Supply, Bakersfield, Calif.

"Every month the projections are pushed further and further out. In recent years, many times units were actually available on the ground in the U.S. and pre-ordering wasn't necessary. You could count on them being delivered very near the original projected date. This past 6-9 months has been very frustrating. We're being promised that production will catch up by year's end. Hopefully, we will be back to business as usual."

Simon of Maize Corp. is seeing the same trend when it comes to equipment deliveries for hay tools. "We placed an early order for a baler with a deposit on September 22 and won't get it until July 10," he says.

"It wouldn't have made any difference if we had it ordered on an early order program or not. The big money talks and it's coming from outside the U.S. We wouldn't be this bad off if it weren't for the weak dollar," he says.

"We definitely could have sold more spring tillage tools if they would have been available," says Jon Tjosvold, vice president of Tjosvold Equipment, Granite Falls, Minn.

"Unfortunately, some of the tools I did order that were supposed to be delivered by now have not arrived and production is still being pushed back."

His experience has been pretty much the same with tractors and he expects harvesting equipment will also be difficult to find for retail before long.

"Our customers are forced to use their old equipment until the new is here," Tjosvold says. "In many cases, this is not acceptable. Unfortunately, there are no alternatives. I've heard of deals falling through due to these circumstances, but knock on wood, we've gotten by so far."

Bobby Carey, a salesman for Producers Tractor in Marvell, Ark., says he believes customers would order earlier if they had assurance on when they'd get it. "But because we can't give them a fixed date when their new equipment will be delivered, they are reluctant to place the order."

Even those who successfully pre-sold and were able to meet customer requirements for new equipment during this year have little confidence in being able to repeat in 2009.

"Things were fine if customers pre-ordered early," explains Theresa Nykolaishen of Nykolaishen Farm Equip Ltd, Kamsack, Saskatchewan. "The problem is next year. What will happen then? Manufacturers don't seem to have a grasp of the problem."

Suchomski says he can understand why customers are questioning the value of getting their equipment orders in early. "This year, I wrote more early bird orders than ever before — an even dozen. To date, I am still waiting for five of the pieces that were all ordered last August. Hay time is getting too close for comfort."

As a result, Suchomski says he's turned to shortline suppliers to fill in the equipment gaps with some success.

"Even though the majors are trying to trim inventory to the bones, many of the smaller companies are still very accommodating. We're doing more and more business with Woods and H&S Manufacturing. I guess you sell what you can get," he says.

Mitchell of Mobile Ag & Industrial Supply says the equipment shortage has given the dealership, a shortline retailer, an advantage vs. competing dealers that supply machinery only from the majors.

"We picked up the Deutz-Fahr line and brought in five new tractors in the past 2 months. They currently seem to have plenty of stock and have been very eager to work with us. The shortage also helped us sell a McCormick unit we had on hand to a customer who couldn't get a John Deere for 6-plus months."

"We pushed pre-sells and traveled to find equipment for customers. We traded a lot with other dealers. We also sold some shortline equipment when our major was sold out."

Greer of D&D Seeds & Farm Equipment Sales is taking a hard-line approach to suppliers that can't or won't go the extra yard to meet his customer's needs.

"Switch to a manufacturer that has the consumer's welfare in mind. If you can't demo it, don't buy it!" he says.

Are Manufacturer Alliances Good for the Ag Equipment Industry?

Other Factors That Will Impact 2014 Ag Equipment Sales

In this week's episode we take a first look at the UAW strike at 14 of Deere's U.S. facilities. In the Technology Corner, Michaela Paukner examines Kubota's planned acquisition of AgJunction for $72.8 million. Also in this episode, California Gov. Gavin Newsom has signed a bill that will ban gas-powered small-off road engines. Ben Thorpe reports on dealers early orders heading into 2022, based on the results of Ag Equipment Intelligence's Dealer Business Outlook & Trends report. Art's Way reported its second straight profitable quarter, and saw Agriculture Products segment sales for the third quarter improve by 27% vs. last year.
View More