Great Plains Manufacturing used both storytelling and props to get its message across to more than 200 equipment dealers attending the company’s recent 2010 National Dealer Meeting. 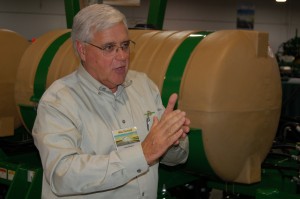 Tom Evans, the company’s vice president of sales and marketing, told a popular story to encourage some introspection from dealers at the bi-annual meeting, held July 12-15 in Kansas City.

The story’s premise is that a frog placed in boiling water will jump out immediately to avoid injury, but a frog placed in cold water that is heated very slowly will not sense the gradual change in temperature and boil to death.

“It’s easy to be slow-cooked by the competition if you don’t drive the momentum. The competition definitely knows we’re there,” Evans told the dealers. “But there’s no one in this industry that can be you in the dirt.”

The company also left small whisk brooms on dealers’ chairs before they entered the main floor for a luncheon.

“Keep them on your desk,” Evans said. “And when a customer asks what they’re for, it’s to remind you that our vertical tillage tool creates a seedbed customers will love, because the others can’t do it.”

Per the agreement, dealers agree to stock a certain level of equipment and send a salesman and service person to approved training, and in return dealers get certain ordering incentives.

The program, started in 2000, currently has 384 active dealers, and more than 1,000 salespeople and 700 service technicians have been trained.

“We wouldn’t be anywhere without our dealer network,” said Jayme Baker, advertising manager for Great Plains. Nobody would by a $150,000 planter without being able to see it first.”

Great Plains also discussed its new “Quote Pro” computer program that allows dealers and customers to price out machinery and features for equipment and produce a professional looking quote.

New Tools to Sell. Great Plains had more than two-dozen machines on the floor at the exposition center, including several being shown to dealers and the trade press for the first time. 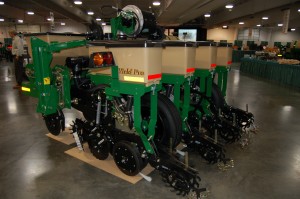 The company believes the fertilizer tool, to be offered in 30- and 40-foot widths, will help farmers precisely apply anhydrous and liquid nitrogen fertilizer in the spring, before planting, to maximize its effectiveness. The tool can also be used for side-dressing a crop after emergence.

Evans said customers can run 8-9 mph with the 3-coulter system on theNutri-Pro, which should be available to dealers in the fall. “We had a customer who covered 2,900 acres of corn with the 40-foot bar in 15 days, and 4 of those were rainout days. Then they followed it with a twin-row planter.”

Dealers were also interested in new 4-, 6- and 8-row Yield-Pro planters on the floor that can be set up in traditional or twin-row configurations.

The planters could play a role in spreading the use of twin-row corn on smaller farms, and some dealers could even rent the machines if they choose. “To serve customers with small farms who are interested in twin row, those dealers need a machine that is easy to hook up and move around,” says Mike Cleveland, national sales manager for Great Plains.

Simba Products Peak Curiosity. Great Plains dealers also got their first look at tillage tools made by Simba International, an equipment manufacturer based in Lincolnshire, England, that was purchased by Great Plains last April.

Great Plains owner Roy Applequist said the Simba purchase made sense because Simba’s products are highly respected and utilized in western Europe, while Great Plains’ technology is more suited for the eastern European and Russian markets. 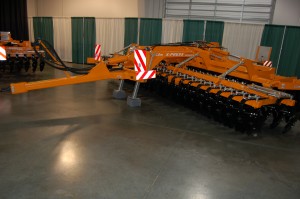 Simba also had technology in wheat and canola planting that was attractive to Great Plains. “Now we can strengthen ourselves quite a bit and have more products on the ground in Europe,” Applequist told media representatives at the meeting.

“Our goal is to find solutions that work in each dealer’s region,” added Daniel Rauchholz, Great Plains’ president of international sales.

Simba was formed in 1976 — the same year as Great Plains — and its initial niche was providing tillage equipment for high-horsepower tractors being introduced in Europe. Simba’s exports began with Saudi Arabia in 1982 and it was the second manufacturer in Europe to introduce a cultivator-planter. 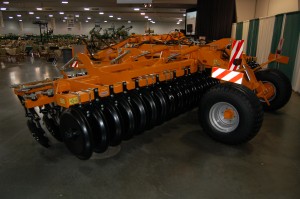 Simba's X-Press has patented double-disc press rings to smash dirt clods and firm up the soil.

Three disc cultivators made by Simba were shown in Kansas City: The X-Press, a pull-type cultivator seeing significant sales in Europe; the SL 500, unveiled in 2007 at Agritechnica; and the DTX-300.

The X-Press is billed as a “high-speed, one-pass” cultivator made to run in the heavier soils of Europe and has patented, weatherproof double-disc press rings designed to smash down dirt clods and firm up the soil. The press-ring design is of great interest to Great Plains.

The X-Press also has a turnbuckle on the frame that adjusts the aggressiveness of the disc blade angle from 10-25 degrees to offer quick adjustments based on soil conditions. 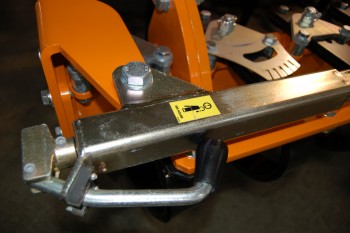 Simba's SL 500 has a turnbuckle that can be used to change the aggressiveness of the disc blade angle from 10-25 degrees.

Great Plains officials said they’re keeping the Simba brand for now —although a new corporate logo has been introduced that incorporates both companies — and a team is managing Simba separately in Europe.

Applequist said Simba’s technology — and even some of its finished products —could be brought back to the U.S. “We’re establishing with the dealers exactly what technology can be adapted here. And there’s a good chance it will create some jobs in Kansas.”

Great Plains Mfg.-Simba Int’l Venture Off to a Fast Start