Record rainfall across Canada’s Prairie Provinces during 2010 turned cropland into a sticky quagmire that swallowed equipment. When spectacular photos began circulating online that depicted four-wheel-drive tractors equipped with triples and high-clearance sprayers stuck in mud beyond the hub, a farm equipment dealer in Saskatchewan found a way to recognize the challenging year and have fun at the same time. 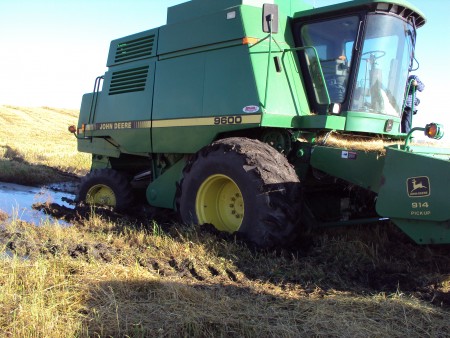 Carla Debnam’s family and community rallied behind her submission to Flaman’s “Great Saskatchewan Stuck in the Muck Contest," voting her photo of a John Deere 9600 combine into first place.

Nearly every farm customer who Jody “Joe” Kemp, a salesman for Flaman Sales in Southey, Saskatchewan, talked with had gotten stuck at some point. Kemp thought it would be interesting to have a place where farmers could share their experiences. A few weeks later, Flaman’s marketing department launched the “Great Saskatchewan Stuck in the Muck Contest,” complete with a dedicated website and promotion through Flaman Group's page on Facebook. Farmers entered the contest by uploading their stuck photos, which were hosted on the site.

Flaman is a retailer of farm equipment, trailers and other products, but because the region it serves is typically bone-dry, it doesn’t sell track conversion kits or tracked equipment. Flaman did have a waiting list for towropes, however.

Though the intent wasn’t to increase floor traffic at the dealership, the contest went viral, says Steve Whittington, a member of the executive team for Flaman. During the month-long contest, there were more than 60,000 visits to the Stuck in the Muck website (twice the traffic Flaman’s regular websites get) from across the globe. In addition, 2,300 “liked” the Stuck in the Muck website through Facebook. More than 300 people submitted 365 photos.

Promoted in the local media and picked up throughout Canada and the U.S., the contest existed entirely online. “It was a fun event that we did as a service to our customers,” says Whittington, “but we didn’t use it to drive sales at Flaman.”

The Stuck in the Muck website was clean and devoid of advertising for the dealership. Links did take interested parties back to corporate site, however, which Whittington believes increased the visibility of the Flaman group. More than 50% of the participants were already Flaman customers.

“This contest exceeded our expectations,” Kemp says, having received a lot of positive feedback from customers. “I think it became so popular because everyone was in the same predicament this year. Farmers could sympathize with each other. While getting stuck was depressing at the time, people are looking at all the photos and they’re laughing about it now.”

Flaman recently announced that the contest would return "bigger and better" for 2011, launching on March 1. This year it will be open to people in Saskatchewan, Alberta and Manitoba. With the expanded coverage comes a new name, the Great Stuck in the Muck Photo Contest.

Flaman Group plans to create a calendar with the winning photos and sell them to raise money for charity. Categories for 2011 will include Best Overall Stuck, Best Truck Stuck, or Best Tractor Stuck. Photos will be open for public votes, and winners will get tow ropes.

The fields in Western Canada were so water-logged last year that all types of machines were getting stuck, including this Case IH 9380 4-wheel drive tractor, equipped with duals. Lori Wuchner’s photo placed fifth in the online contest.

Reasons the Ag Economy is Stuck in ‘Neutral’

Reflections on the U.S. 2018 Midterm Elections & Potential Impact on Ag