Combine harvesters make a substantial contribution to worldwide food production — virtually no other invention has had the kind of impact on world production that this workhorse has. The combine harvester performs an operational process which has historically demanded an enormous physical output in the field and on the farm: the combine travels across the field cutting the crop, threshing out the valuable grain with minmum losses, and finally collects the harvested grain in a large grain tank. It does this very quickly, and on a huge scale.

This year, CLAAS marks a special anniversary of the combine, its 75th year in operation.

The CLAAS combine harvester came onto the agricultural scene in Europe in the summer of 1936. In that same year, at the Zschernitz Manor near Halle in the German federal state of Saxony-Anhalt, August Claas unveiled a tractor-trailed machine which he had developed at his plant in Harsewinkel in Westphalia. From day one, this “reaper-binder” delivered a perfect flow of grain as it traversed the field, with the material transported away in sacks — a revolution in agriculture was born.

A number of American combine harvesters, also tractor-trailed, had been used in Europe as early as the 1920s, but these machines proved to be unsuitable for the compact, often damp or flat-lying European crops. A widespread opinion soon developed among hands-on farmers and agricultural scientists in Europe that a combine harvester approach as pioneered in the United States would not be suitable for European cereals harvesting, with its long straw, and often weed-infested characteristics.

Up until that point, cereals in Germany had been chopped manually by scythe and were dried in sheaves, or placed or stored in loft environments to dry. Stationary threshing machines later came into use, which right up until the very darkest days of winter were used to separate the grain from the stalks and heads.

August Claas, who in 1913 founded an agricultural machinery company together with his brothers Theo and Franz, was resolute in his belief that European cereals, too, could be suitable for combine harvesting. His son Helmut Claas, who would later go on to lead the agricultural machinery company to world recognition, recalls: “My father, together with Walter Brenner, an assistant of Professor Vormfelde at the University of Bonn, had developed a prototype as early as the beginning of the 1930s. It was a machine built around the Lanz Bulldog, making for a highly modern combine harvester with a cutterbar at the front. Up to that point in time, there had never been anything like it anywhere in the world.”

The concept itself was ingenious, although the idea came many years too early. Many of the necessary technologies such as high-performance tractors, hydraulics, electrics, etc. had yet to be developed for tractor-hitched combine harvesters. The prototype was officially showcased to the German agricultural machinery industry with the hope of winning the industry over to the combine harvester concept. However, nobody showed any interest. “In that case, we’ll go it alone”, said August Claas, vowing to continue the design.

The breakthrough came in 1936 as a trailed combine harvester with side-mounted cutterbar. Claas unveiled his model at the Zschernitz Manor before a large number of experienced and highly skeptical farmers from the central German regions; the first fully functional reaper-binder to be manufactured in Europe. Provided all went to plan, the machine facilitated a daily harvesting output of 1,100 bushels (30 tonnes) of wheat. In the following six years, 1,450 prototypes of the successful machine were manufactured. 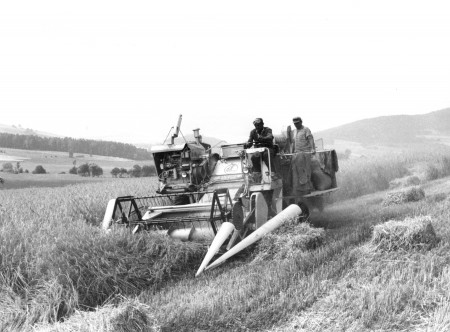 The first self-propelled combine harvester, i.e. with integrated engine, was launched on the market by CLAAS in 1953. This self-propelled harvesting system went on to prove itself time and again. In the following decades, CLAAS developed ever more efficient combine harvesters for all types of crops, climates and fields around the globe.

The latest combine harvester from CLAAS, the award-winning LEXION 700 Series was introduced in August 2010. As part of a 10 Hour Challenge, the second largest machine in the new range, the LEXION 670 TT harvested over 51,000 bushels of corn over a ten hour period outside of Yorkville, Illinois.

Today, 75 years on from the first CLAAS combine harvester, CLAAS continues to push the limits of the capacity and performance of the modern day combine. To learn more about the history of CLAAS combines and watch videos of machines in action, visit mycombine.claas.com

What memorable experiences have you had with your CLAAS combine?

CLAAS would like to hear stories and experiences and to see pictures and films documenting the 75-year-long partnership between CLAAS combines and those who use them. CLAAS plans to create a book containing the greatest CLAAS combine stories from all over the world.