To say that Larry Roeder and his wife Susan Sommers were thinking outside of the box when they designed and built the new Hiawatha Implement store in Hiawatha, Kan., would be an understatement. The new John Deere dealership combines decorative elements unlike any typically found in an equipment dealership with the utility of a high functioning facility aimed at improving the overall efficiency of the business.

“We had wanted to build a new dealership in Hiawatha for about 15 years,” says Larry Roeder, about the dealership he’s owned for nearly 31 years. He also has a Deere store in Mound City, Mo. The new Hiawatha location was opened in August 2011 to coincide with the company’s 30-year anniversary and replaces a non-descript building that had seen it’s better days a few decades ago.

And, it just so happens Susan has been in the home building and interior design business with her brother for a number of years.

From a distance, the exterior of the building features a tower entrance that reflects the design of many new commercial retail developments, except it has a large John Deere logo that is lit in the evening and draws the attention of passersby, day and night.

Entering the store, the first thing that greets visitors is a custom-made John Deere logo made of black and green granite and yellow onyx that’s inlaid into the slate-top floor used throughout the entire showroom. Susan had the granite Deere logo made in Florida, and she found the discontinued slate flooring tiles in California.

The next thing you’ll see entering the front door is several wooden display units that came from any number of places. The ones holding the T-shirts came from a Harley-Davidson dealership in California. There’s also a Habersham room divider typically found in an upscale luxury home. “It’s supposed to divide the room and you can hang pictures on it,” says Susan. “This one sat in a furniture store in Raleigh, N.C., for 20 months and they finally they dumped it on eBay. I was the lucky bidder.”

Throughout the showroom, offices and even the employee work and rest areas, you’ll see furniture and fixtures Larry and Susan found in places like Habitat for Humanity, abandoned theaters and bankrupt hotels around the U.S.

The new, much larger service area features all of the efficiencies of the newest, most modern farm equipment dealership shops. Larry estimates his service area is at least 15% more efficient than the service shop in the old facility.

In their planning, rather than visit other farm equipment dealerships, Larry and Susan studied Harley-Davidson dealerships and Cabela’s outdoor gear stores. “No one knows more about merchandising than Harley-Davidson,” says Larry.

The two of them did all the landscaping and most of the dirt work around the new building. During construction, Susan could be found installing the slate roof. “She didn’t want anybody else to put it together,” says Larry. “She wanted to make sure the slate tile combinations were correct.”

The rest of the story about how Hiawatha Implement built both “form and function” into its unique, new dealership is told in the photographs on the next several pages of this report. 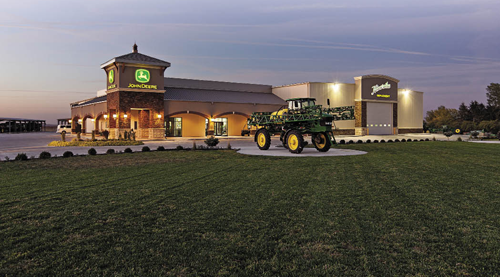 Contrasted against the Kansas night sky, the new Hiawatha Implement store would stand out regardless of its setting. In terms of dealership design, it will most likely set the bar for the look and feel of dealerships to come. 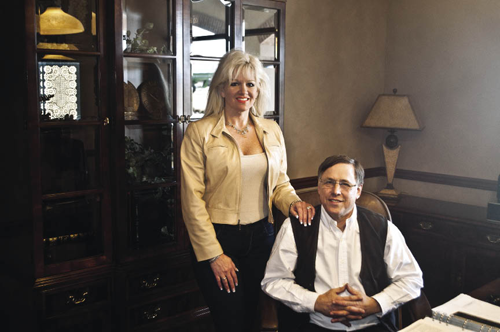 Every detail of Hiawatha Implement reflects owner Larry Roeder and his wife Susan Sommers’ commitment to their employees and their customers. It’s their way of saying, “You are important, and you deserve it.” 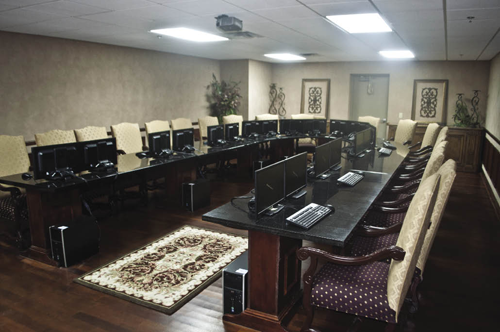 The top-shelf meeting and training center at Hiawatha Implement is fully equipped with 10 computers, 20 screens, granite desktops and comfortable high-back chairs. Educating customers is one of the most important aspects of the dealerships according to Larry Roeder. “Educated customers do a better job of operating.”

The exterior doors of Hiawatha Implement are positioned north to south to take advantage of the north-south breeze. The 24 x 18 foot service doors reflect Larry Roeder’s core philosophy: “My theory is machinery is either in transport position or it’s in field position. By the time it gets to the dealership, it’s in transport position and we don’t need huge doors to get it in and out.” 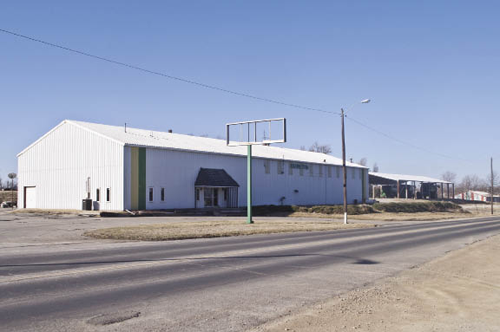 Hiawatha Implement sits at the entrance to town on the site of an old motel. Fifteen years in the making, owners Larry Roeder and Susan Sommers took inspiration from store models such as Cabela’s and Harley-Davidson where the store becomes more than a retail center, but an attraction for visitors and customers. The photo at top left is that of the old dealership that was replaced. 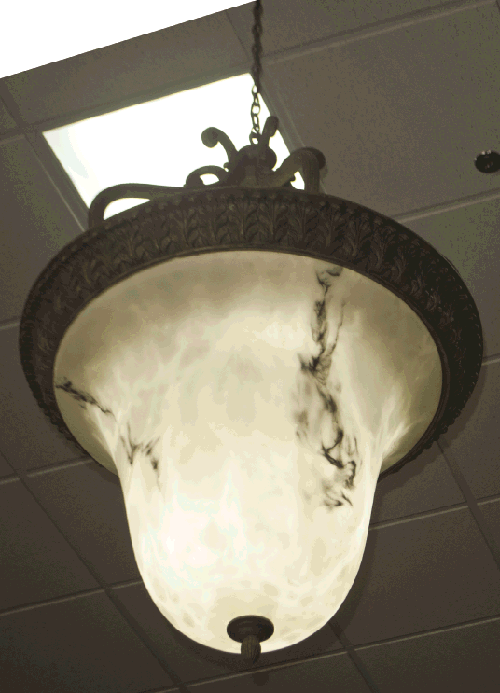 The antique chandeliers that light the new showroom were purchased three years before the Roeders began building the new store. “We found them at a lighting store that went out of business without knowing how we would use them,” says Susan. 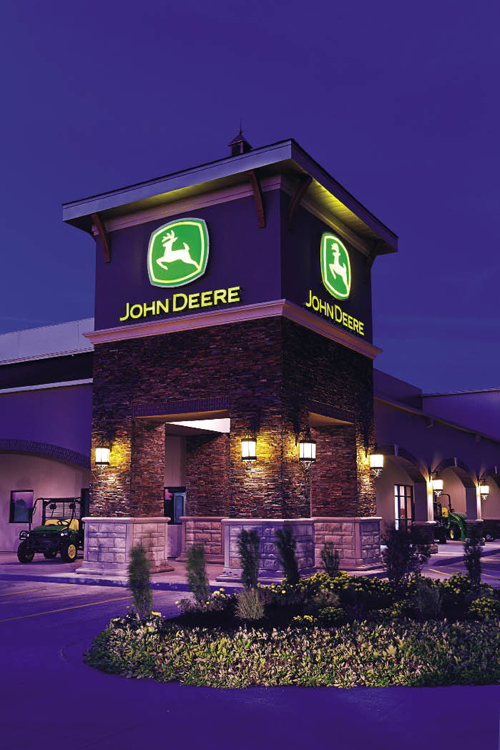 Wanting a traditional look inspired by European architecture that has lasted for centuries, Larry and Susan built the tower pictured here, equipped with slate roof and copper cupola as the focal point of the Hiawatha Implement exterior and facade. 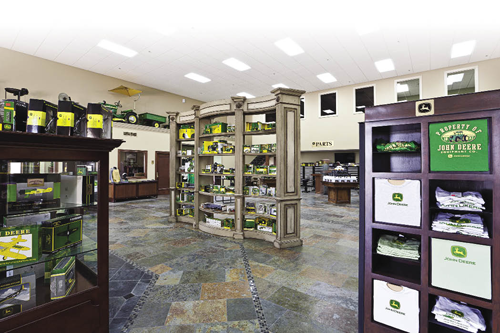 The Habersham room divider seen here is typically seen in upscale luxury homes. But the plantation look seemed perfectly suited for a farm equipment store. Bought for pennies on the dollar from a Raleigh, N.C., furniture store, the room divider works to divide the consumer merchandise such as toys and clothing from the parts, sales and service centers. 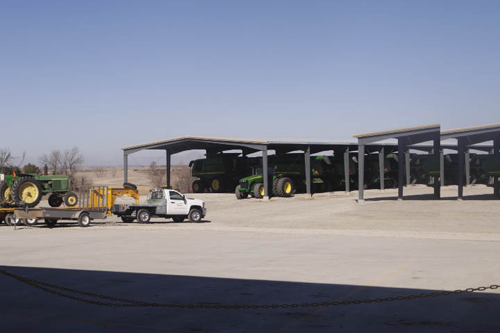 In the back lot of Hiawatha Implement’s new store sits two 70 x 160 foot covered stalls for storing used equipment and equipment waiting for service. Larry Roeder explains, “We wanted to cover this equipment so it’s not snow covered or all wet when we want to show it to a customer or when we bring it into the shop. It’s difficult to look a customer in the eye and say, ‘Would you bring your combine out of your shed and pull it on our lot and let it sit out in the weather while we’re waiting to get to work on it.”

A custom-made John Deere logo made of black and green granite and yellow onyx is inlaid into the slate-top floor that’s used throughout the showroom. The granite Deere logo was made in Florida and Susan found the discontinued slate flooring tiles in California. 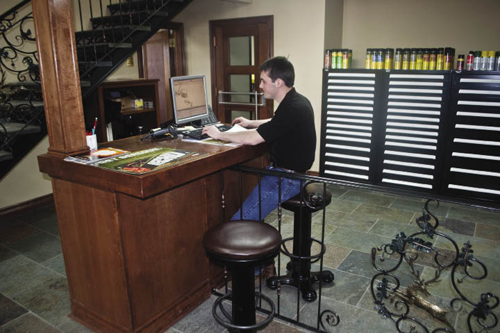 While the front of Hiawatha Implement presents customers with value-adds, technologies and consumer goods the back of the store is by contrast focused on parts and service. Besides the front entrance, customers can also enter the dealership from the side of the building to go directly to the service department. While a wrought iron fence prevents them from entering the parts area, they can sit next to parts staff to review orders or discuss other needs.

From the service desks through parts storage, every square inch of Hiawatha Implement was intelligently designed with workflow efficiency in mind. This includes a mezzanine storage level to maximize space from floor to ceiling. 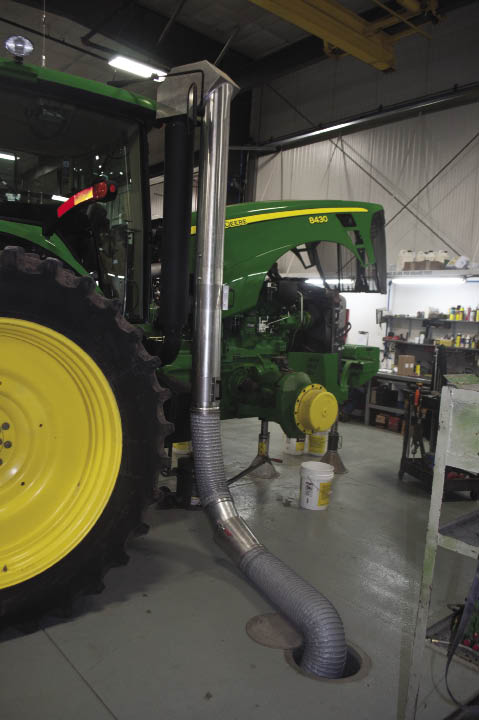 Hiawatha Implement devised an exhaust system for the service department that runs through the floor as opposed to being hung from the ceiling. The exhaust equipment, supplied by Car-Mon Products of Elgin, Ill., This allows for the movement of the overhead cranes throughout the shop. Buried in the concrete, it’s about one-fourth the cost of other exhaust systems typically used in repair shops. 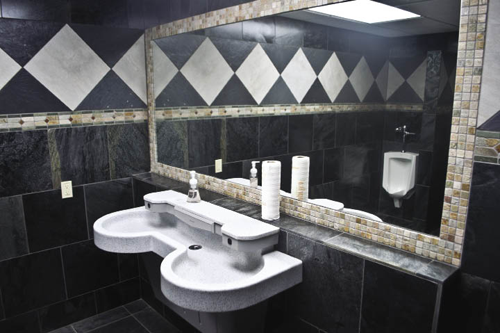 Employee and customer washrooms throughout the dealership are more than a “step up” from the restroooms found in most commercial or retail facilities. 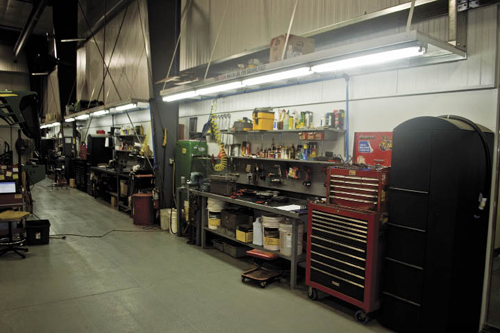 Each technician’s work station is equipped with air hoses and electric that retracts to keep it out of the way when not in use. In addition, the area above the lighting is used for storing seldom used tools and parts. The idea is to give enough room and accessibility to provide each technician the room to operate without moving things around. The new new communications system also stresses efficiency as it transfers calls directly to a technician’s cell even when he’s working on top of a combine or sprayer. 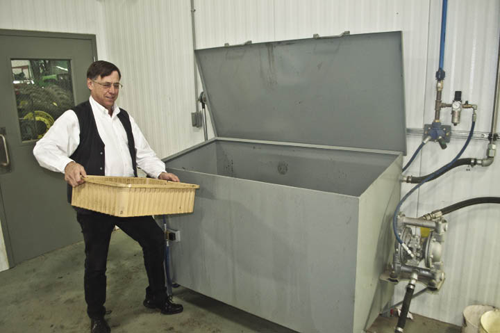 Hiawatha Implement has an intricate system of oil and hydraulic fluid delivery to technicians available anywhere in the service department. In addition, a waste oil containment system capable of storing up to 1,000 gallons of waste oil underground as opposed to big tanks taking usable space. As shown here, Larry Roeder opens the waste oil cabinet by hitting a switch with his knee rather than having to put it down to open the lid. 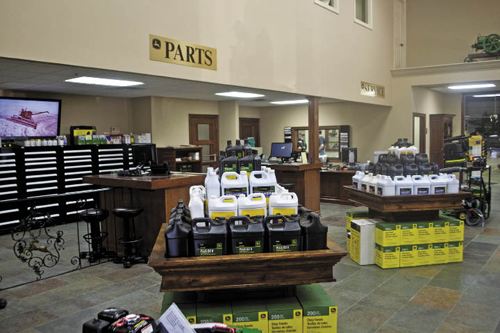 With all of its decorative features, the showroom remains practical and is aimed at making it easy for customers to find what they’re looking for and check out in the dealership’s parts department. 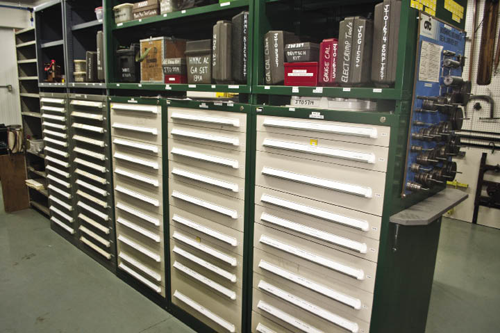 One facet of the parts and service area that immediately stands out are the rows and rows of top-of-the-line Stanley Vidmar storage cabinets. 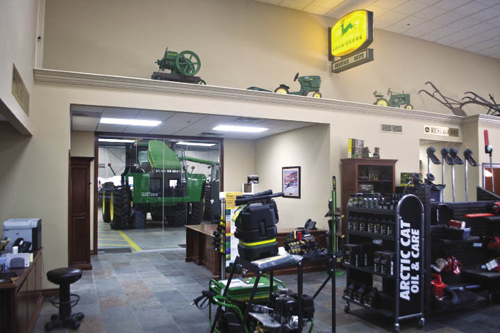 Borrowing from successful showroom concepts used in stores like Cabela’s, antique product displays contrast the old with the new. An upper landing on the perimeter of the Hiawatha Implement showroom displays antique farm implements as well as the old John Deere sign seen here. 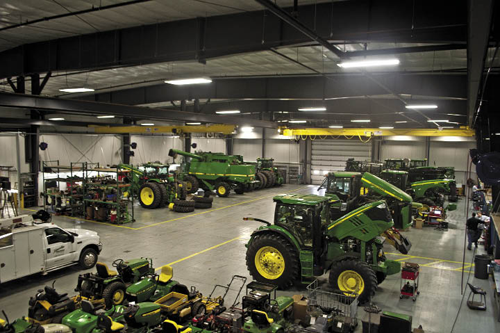 From the three-ton overhead USECO cranes spanning both sides of the shop to the 20-foot aisle running through the middle of 13 work bays, the service area at Hiawatha Implement is a testament to smart planning and providing solutions to work more efficiently. Larry Roeder estimates his new shop is at least 15% more efficient than that of the old facility it replaced.