What Farmers Want From You: Deriving Value from a Mixture of Old Data and New Data

Cameron Mills has been collecting yield data with his John Deere combine for years and has now put that data to work saving him money.

About 7 years of yield map data is layered with soil type maps, soil sampling results and application history to create prescription maps for custom variable-rate applications of potash, DAP and lime. Zones are constantly reassessed and adjusted with new data. If he identifies a low-yielding spot that doesn’t seem to respond to fertilizer, he creates a new zone and a new management plan.

More recently, Mills added a John Deere 2600 Greenstar monitor using an SF2 receiver for auto-steer. He’s had auto-steer on his combine for 3 years and added it to his Case IH tractors that pull John Deere planters in 2010.

“Over the course of a few thousand acres, auto-steer maximizes time and fuel use when you’re taking a full 35-foot swath instead of only a 30-foot swath,” Mills says. “It reduces driver fatigue and allows me to pay attention to more details, such as watching the cutter bar. It also makes it easier for the grain cart driver, especially when we’re cutting soybeans and I don’t have a straight row to follow.” 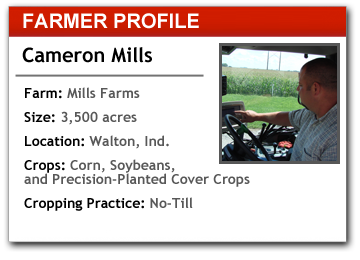 Some of the same benefits transfer to planting, but a real perk is being able to precision plant cover crops. Mills has adapted a 1790 John Deere bean planter to plant a variety of cover crops. One strategy is to precision plant radishes in 30-inch rows and then return to split the middles with 30-inch planted Austrian winter peas. In the spring, Mills precision plants his corn directly over the radish rows that have loosened the soil and between pea rows that spent the fall producing nitrogen.

Having collected data for many years now, Mills finds himself struggling to get new data and old data into forms that work together.

“I had data from 2002 to 2006 that was on the computer but I couldn’t export it to the data card to get to my fertilizer guy,” Mills says. “We were able to get the new data right away, but with the software it took us a long time for updates and tech support to get the old data out, too.”

And all of his data still isn’t in a usable form.

“It’s frustrating that I can’t use and manipulate all of the data that I have. Maybe even newer software makes it easier, but I haven’t got it figured out yet,” he says. “Data management and manipulation is an area where tech support falls short.”

Mills also has struggled a bit with making his Case IH tractors work with the John Deere auto-steer.

“They’re getting a little more compatible with ISOBUS, but there are still struggles and they could make it a lot easier on us,” he says.

A final complaint Mills files is the continuously increasing expense of precision technology.

“You buy a $250,000 tractor, then you have to pay to add the precision aspects, pay for subscriptions and then pay again for the dealer to come out and install updates and do service,” he says. “I understand it’s a business, but if I spend that kind of money on a tractor you would think a few perks would come along with it.”

On the positive side, Mills reports he’s headed to a John Deere AMS training course his dealer is providing. He says it will serve as a great refresher before he climbs in the combine this fall.

Wider World of Business - Are You a Pro-Active Retailer?