Throughout the country, farmland values progressed at an average of 3.7% in the first half of 2020. This increase is in line with the last 5 years’ increases, which should lead to a single-digit increase for the full calendar year. The most significant increases observed during the first half of 2020 are in New Brunswick (+6.5%), Alberta (+4.9%) and Saskatchewan (+4.2%). Other provinces recorded an increase below the national average of 3.7%. 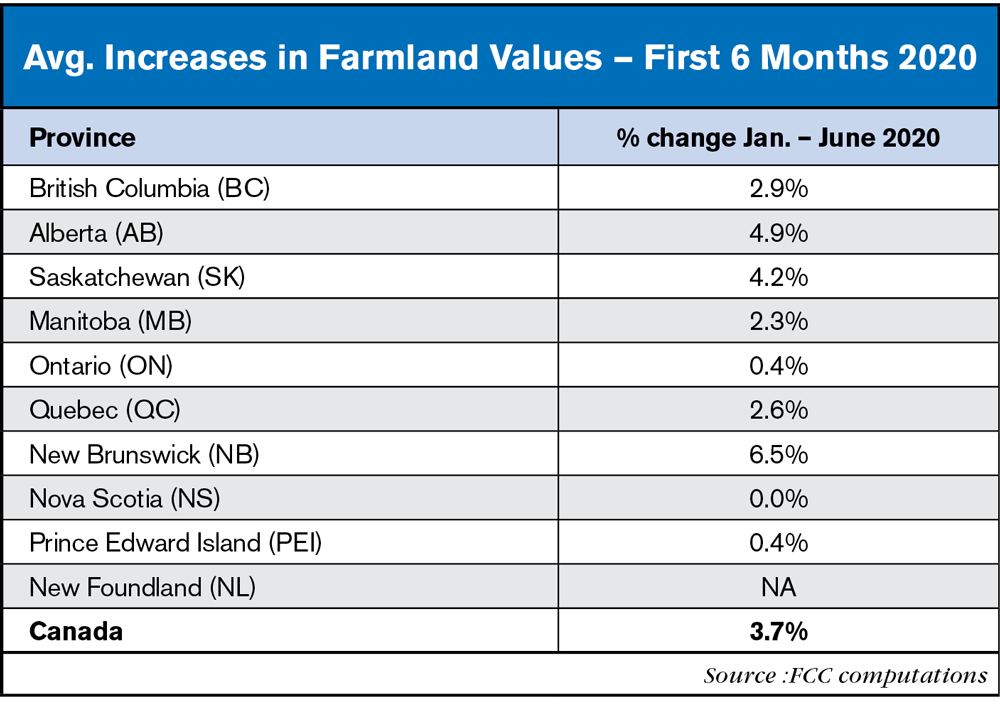 Three observations stand out from the analysis:

The 12 month average increase between July 2019 and June 2020 is 7.1% throughout Canada. This is slightly higher than the previous 12 month period (January 2019 to December 2019). Yet the national average is heavily influenced by results in Alberta (8.5%) and Saskatchewan (7.9%), two provinces that account for 72% of farmland. Most provinces recorded a slower pace of increase in the last 12 months than the most recent comparable period. 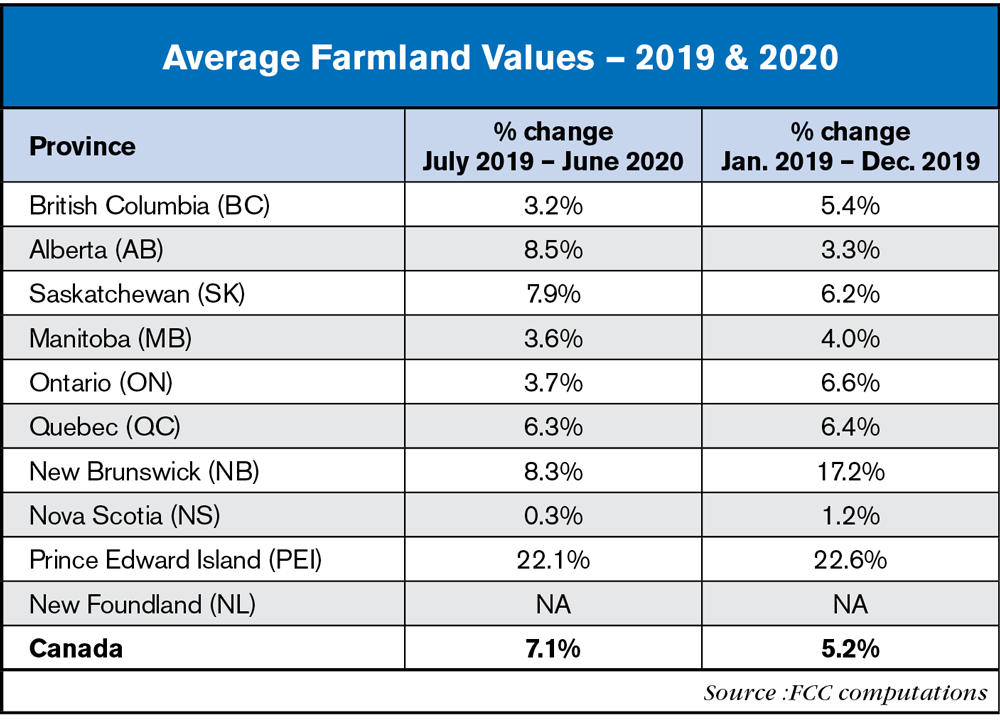 The global pandemic has had a major influence on the economy. Interest rates started falling as the Bank of Canada injected liquidity in the economy. As a result, average borrowing costs have been trending downward beginning in April, reaching an all-time low recently.

Commodity prices were undoubtedly affected by the pandemic and supply chain disruptions. Yet, crop receipts (excluding cannabis) climbed 1.6% in the first 6 months of 2020 relative to the same period in 2019.

The limited supply of farmland available in the market and producers’ confidence in the sector’s long term outlook are also key drivers of land prices.

In Saskatchewan, the strongest regional increase was observed in the eastern part of the province. The July 2019 to June 2020 increase is more significant at 7.9% overall. Farmland values moved up 2.3% in the first half of 2020 in Manitoba vs. 3.6% for the most recent 12 month period. Average increases in farmland values were similar across most regions, yet land prices appear more variable than in the past.

In Ontario, we see that farmland values stabilize in most areas with an increase of only 0.4% in the first 6 months of 2020. The South Central and North Western regions are notable exceptions with more significant increases.

In Quebec, values are also stabilizing, albeit with some regional exceptions (for example, in Estrie), which see high demand and limited inventory. Quebec recorded an average increase of 2.6% from January 2020 to June 2020 vs. a 6.3% change from July 2019 to July 2020.

The full extent of the Covid-19 influence on farmland values is yet to be known. It could take a year or more before being able to assess its influence on economic variables that drive the farmland market. The size of the 2020 crop, foreign demand for Canadian ag commodities, interest rates and the value of the Canadian dollar are the economic variables to monitor. The economic uncertainty calls for a careful review of investment plans to identify risks and opportunities in the farmland market.