It is estimated that 25% of U.S. soybean oil is used for biodiesel and bioheat applications. As such, it is an important component of the soybean market. U.S. biofuel production has grown from about one-half million gallons in 2010 to 1.73 billion gallons in 2019, according to the U.S. Energy Information Administration (EIA).

The drop off in fuel use during the height of the COVID-19 outbreak earlier this year hit ethanol production — which utilizes one-third or more of all U.S. produced corn — much harder than that of biodiesel.

In other word, biodiesel is the second-most consumed biofuel in the U.S. behind ethanol. The lack of significant blending restraints and the presence of incentives for producing and blending biodiesel have helped support biodiesel demand so far in 2020. Biodiesel consumption meets the Renewable Fuel Standard and also receives a relatively favorable Carbon Intensity score within the Low-Carbon Fuel Standard (LCFS) in California.

U.S. biodiesel production saw smaller reductions in recent months compared with other transportation fuels, according to EIA’s Petroleum Supply Monthly. As a result of mitigation efforts for the 2019 novel coronavirus disease (COVID-19), motor gasoline demand has declined significantly since March 2020. The decline in demand also reduced ethanol demand. Biodiesel production through May 2020, on the other hand, is largely unchanged from year-ago levels because biodiesel is not constrained by the same blending limits as ethanol.

From March to May, when COVID-19 mitigation efforts were at their peak, biodiesel production averaged 114,000 barrels per day (b/d), compared with 116,000 b/d during the same period in 2019. Biodiesel inventories were down 9.6% year-over-year in May and were almost equal to the recent 5 year average. 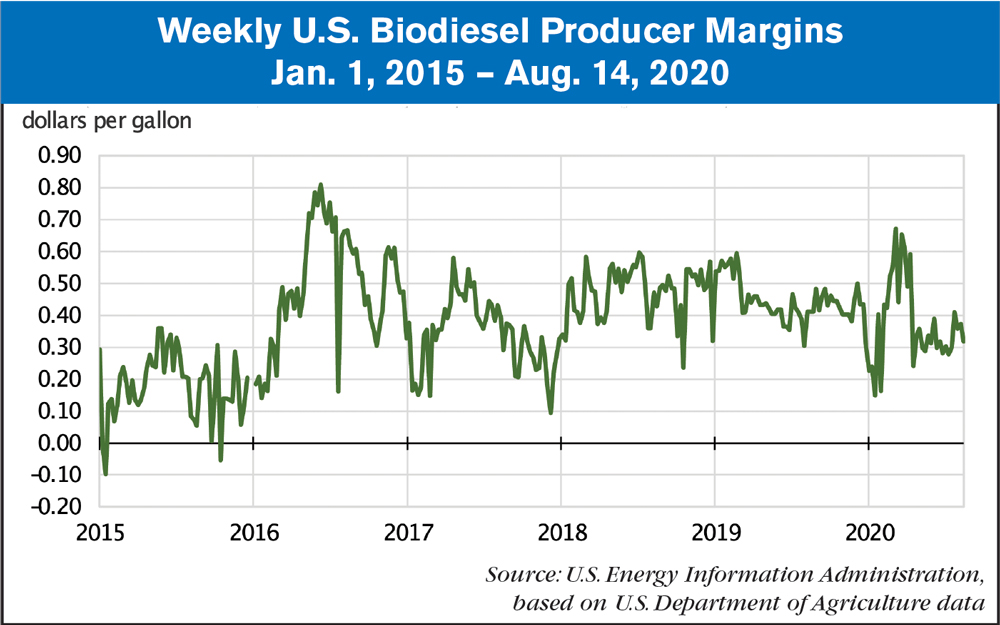 Temporary reductions in demand amid the general economic downturn drove biodiesel margins down in mid-April. They have since recovered to generally normal levels. From March to May, biodiesel producer margins averaged $0.43 cents per gallon (gal), barely lower than the year-ago average of $0.44/gal in the same period and a little higher than the recent 5 year average of $0.42/gal.

In its latest Short-Term Energy Outlook published on Aug. 11, EIA forecasts that U.S. biodiesel production will average 110,000 b/d in 2020, about 2% less than the 2019 average. EIA expects biodiesel margins to remain largely stable.