The latest episode of On the Record is now available! Both dealer and grower sentiment has improved after declining in wake of the COVID-19 pandemic. In the Technology Corner, Jack Zemlicka looks at the possibility of leasing equipment growing in popularity. Also in this episode: what changes in the ethanol industry could mean for the farm equipment business and an update on USDA's work to improve rural broadband access.

Dealers More Positive in May

According to the latest Dealer Sentiments & Business Conditions update, our Dealer Optimism Index, which measures sentiment among dealers compared to the prior month, turned positive after a double digit drops in March and April. 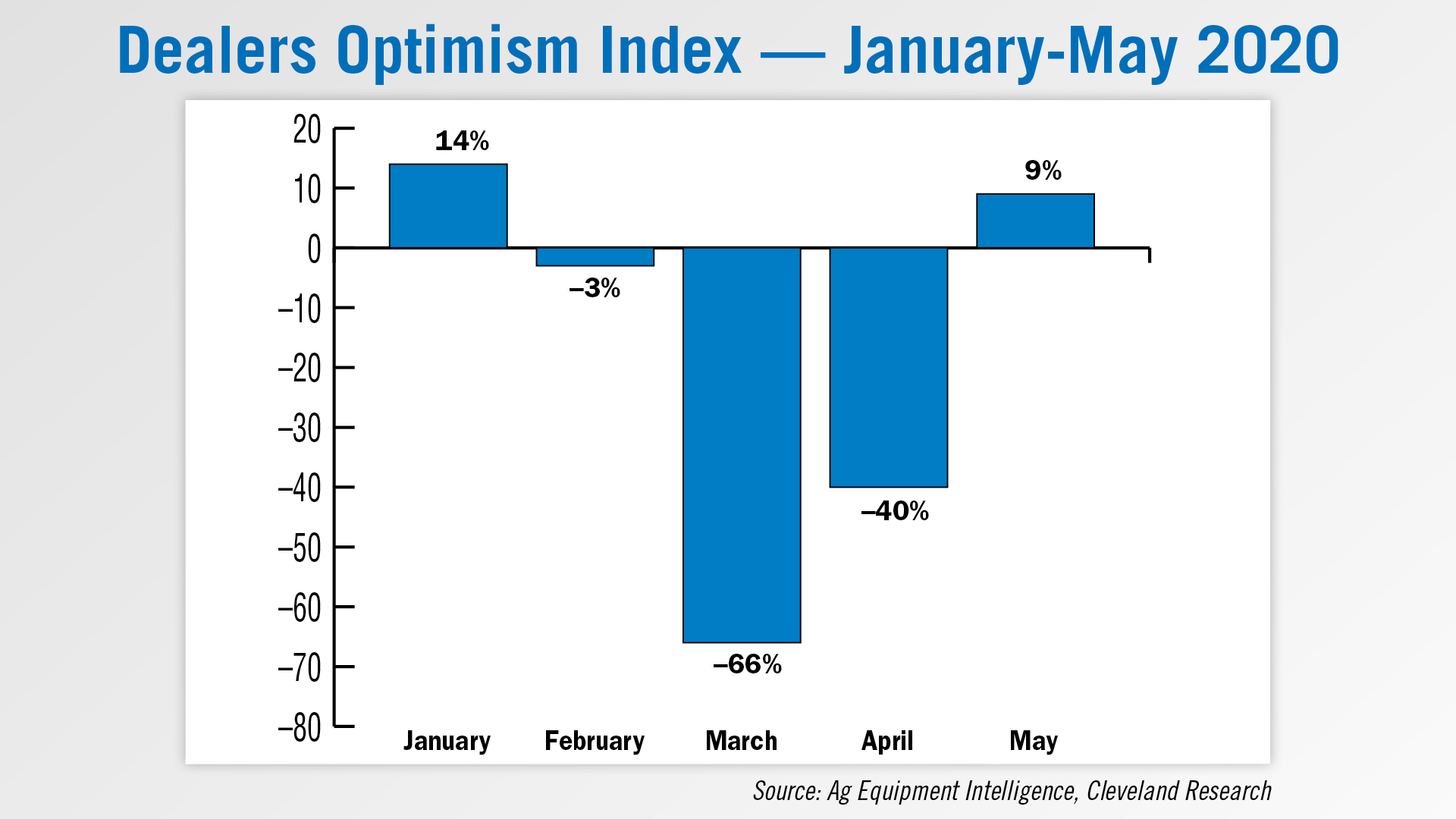 Sentiment rose to +9% in May (34% more optimistic, 41% in line and 25% less optimistic) from –40% in the previous month. Sentiment has bounced back since reaching a low for the year of –66% in March, down from –3% in the prior month. This was the largest month-over-month change in dealer optimism since this data was first collected in April 2011.

Several dealer comments on the survey reflected this jump in optimism. Some dealers reported strong sales despite the current economic uncertainty. As one dealer from the Appalachia/Northeast region put it, "People are continuing to farm and buy equipment. Sales activity is still pretty strong in an uncertain market."

Some dealers mentioned specific segments of the equipment business doing well. "Despite the pandemic situation, business has been very brisk in the lawn/garden and rural equipment customer areas," said a dealer from the Lake States/Northern Plains.

Farmers are also feeling more positive, according to Purdue University’s latest Ag Economy Barometer. The Barometer rose 14 points to 117 from a reading of 103 in May. This is still down 7% from the reading a year ago, however. 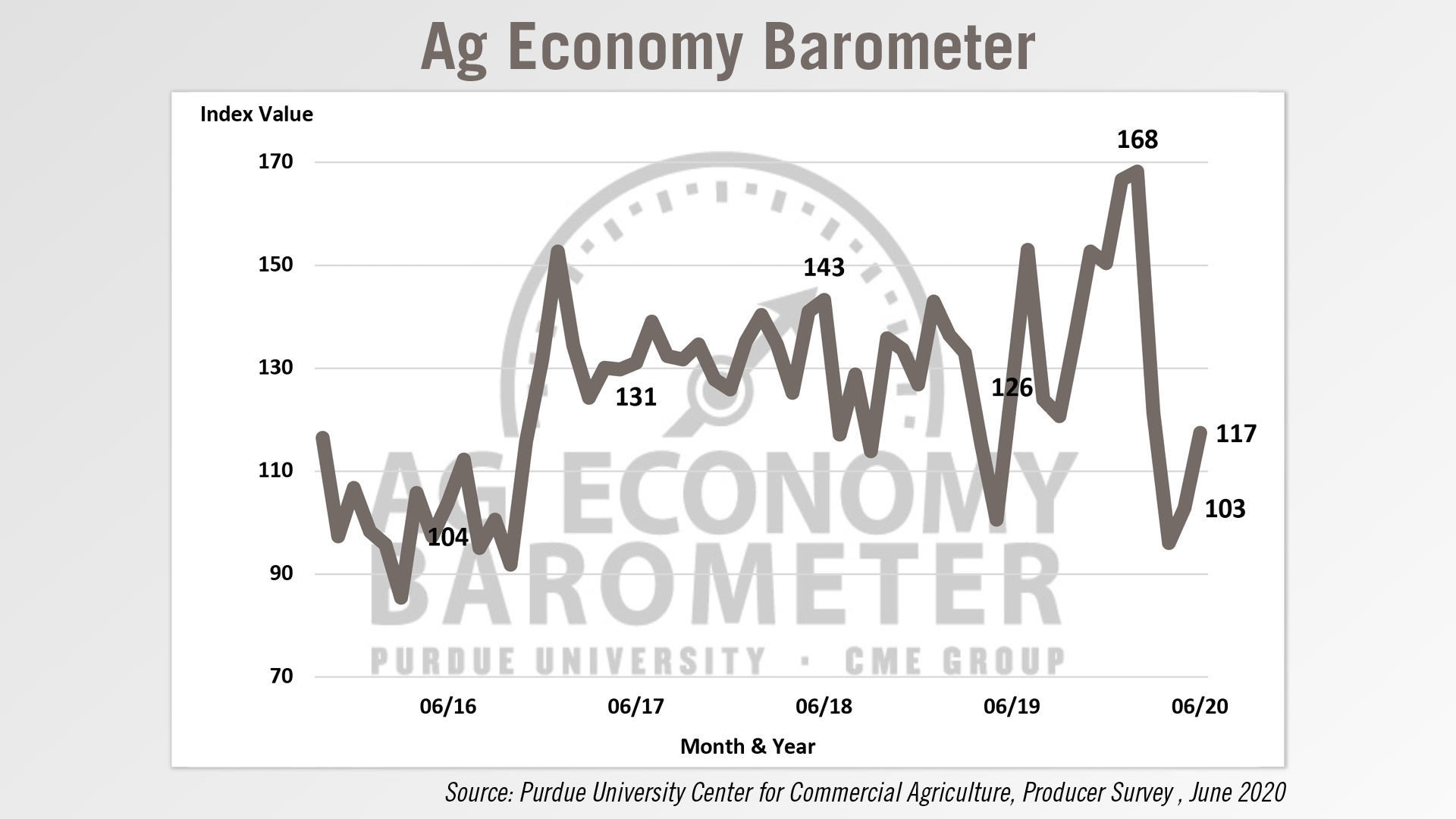 In addition to overall sentiment, farmers are also feeling better about making large investments in their operations. The Farm Capital Investment Index improved to 60 in June, 10 points higher than the May reading.

Over the last 4 months, the survey has asked farmers about their plans to purchase farm machinery in the upcoming years vs. a year ago. 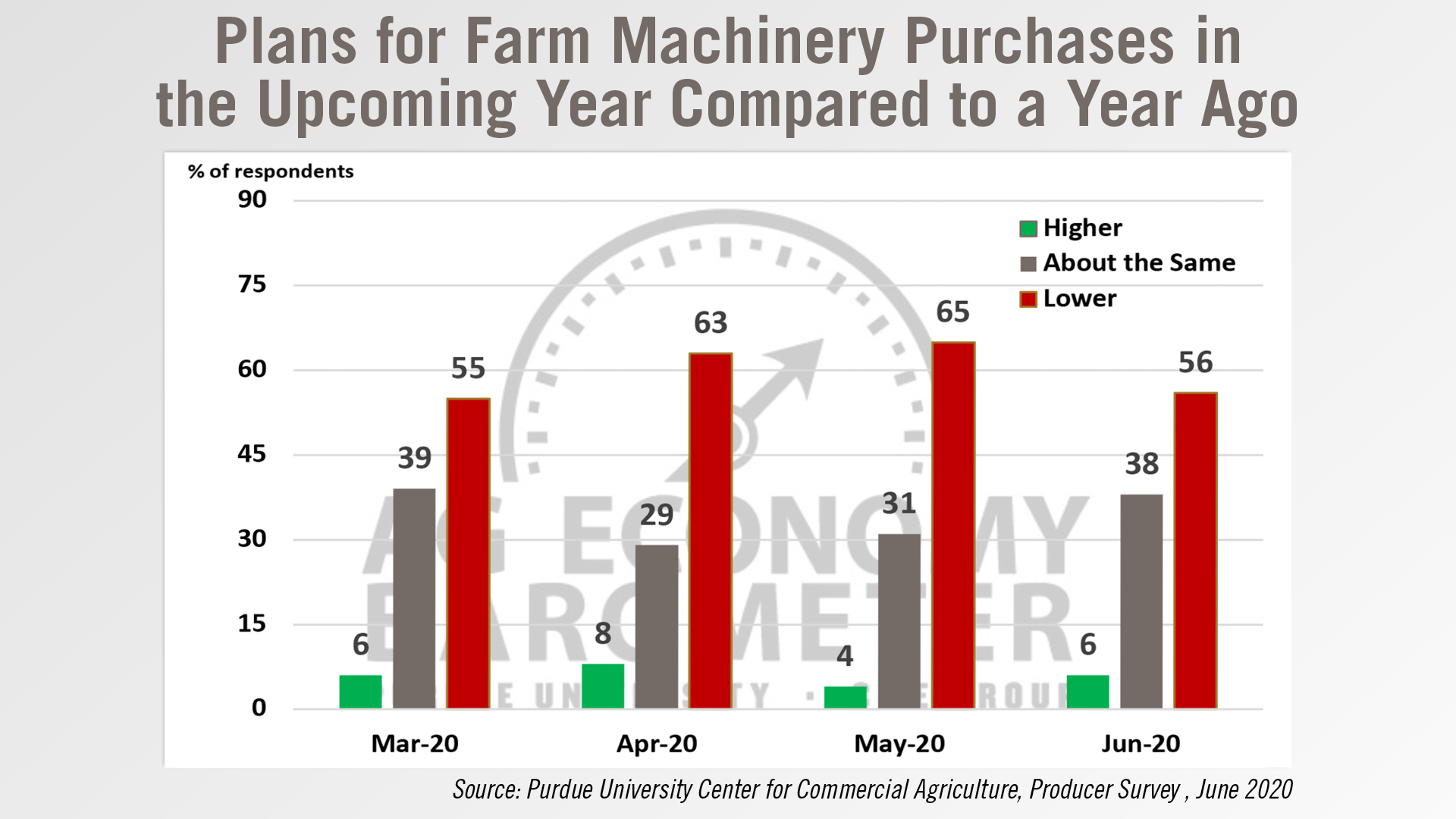 Since first asking the question in March, the majority of farmers plan to buy less machinery than they did a year ago. However, in June their sentiment for machinery purchases returned to pre-COVID levels. The report says “on the surface this appears to be consistent with the improvement observed in the investment index.”

According to the survey, 44% of farmers say their machinery purchases will be about the same or higher in the coming year, compared to 56% who say they will be lower.

As farm equipment continues to become more automated, tracking up- and downtime to the hour — especially with leased machinery — can have a significant economic impact.

For ag input retailers that offer custom application services and lease fleets of sprayers, spreaders and floaters, the ability to monitor machine hours, fuel costs and labor time allows for an accurate analysis of return on investment.

Steve Cubbage, vice president of services at Farmobile, a farm data company, suggests that equipment leasing could become an increasingly popular option for machinery dealers and also provide an opportunity to include or expand value-added tracking services.

He shared an example of a recent product trial the company coordinated with an ag retailer in Wisconsin and the opportunity to improve tracking and performance monitoring of machinery.

They actually had a machine on a 5-year lease, 2,000 hours and it was coming to the end of their 5-year lease and it just so happened that they really weren’t monitoring it well. Just manually, and they overshot that lease by 200-plus hours. It was over a $30,000-plus overage that they went over on a single machine. We can do a better job of at leasing services around identifying where each machine stands in any given month, or day.”

Cubbage adds that for dealerships already specializing in or looking to expand application equipment leasing programs with ag retailers or farm co-operatives, the ability to customize tracking could be an attractive incentive to grow that business.

Production of fuel ethanol, which uses 35% of all corn produced in the U.S. and supports the sales of farm machinery in a big way, will undergo a three stage transformation that will result in fewer, well capitalized players with diverse revenue sources by 2025, according to a new report from CoBank.

The COVID-19 outbreak exacerbated headwinds the industry was already grappling with, which included reduced gasoline consumption and softening exports. Kenneth Zuckerberg, author of the CoBank report, says the industry currently has excess capacity of 1 billion gallons and this is expected to increase to 2.4 billion gallons in 2021. 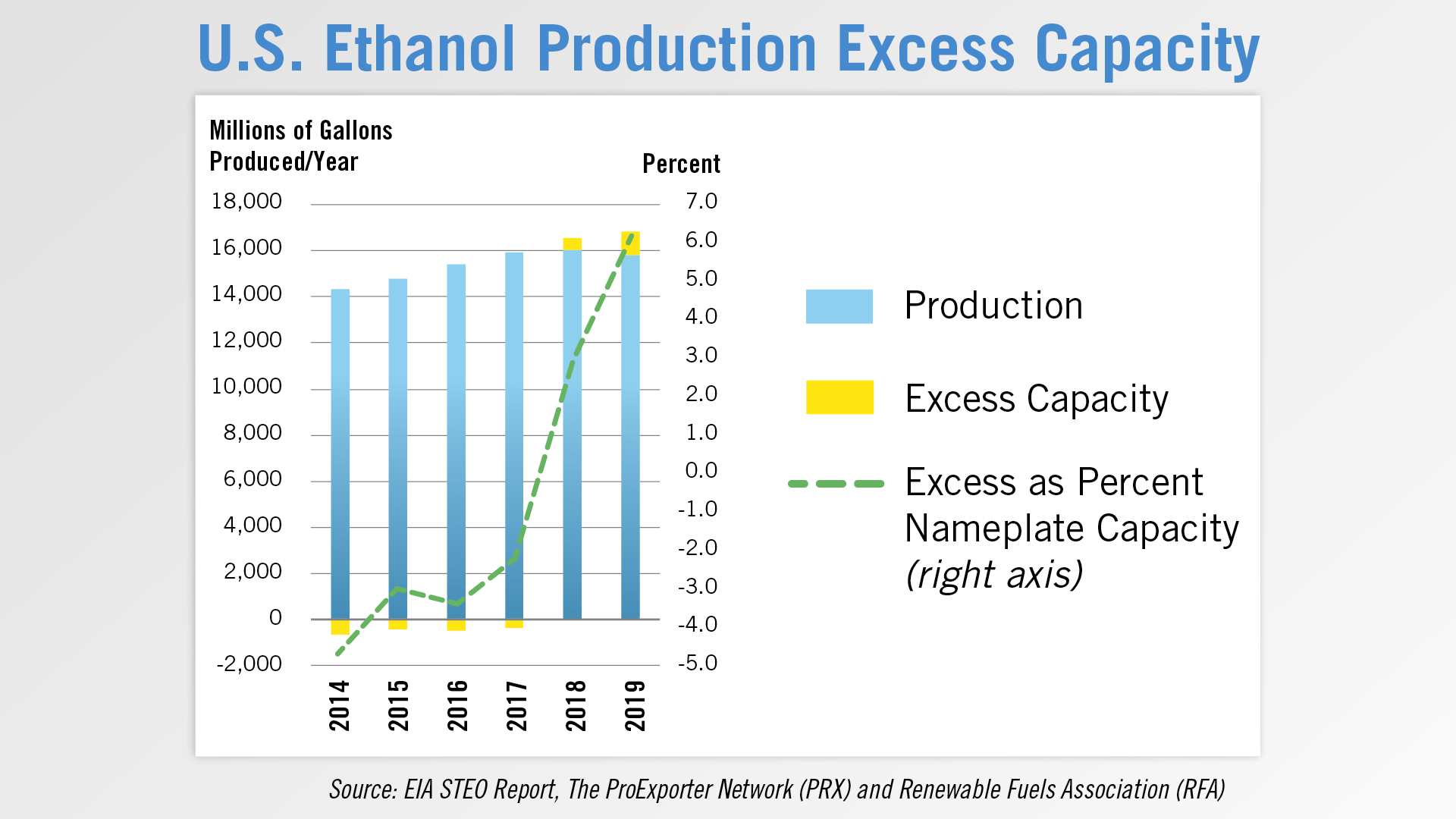 According to data from the Energy Information Administration, U.S. ethanol production totaled 15.8 billion gallons in 2019. Operating margins for ethanol producers have been declining since 2014 and are currently averaging 15 cent per gallon vs. the historical average of 28 cents per gallon.

Nonetheless, top tier producers continue to produce positive operating margins or at least positive cashflows, says Zuckerberg. “In our opinion, bottom tier producers will not be able to manage through the current COVID-19 environment without access to additional capital, government support and/or a significant uptick in demand following a re-opened U.S. economy and greater export activities.

“By 2025, we expect the U.S. ethanol industry to undergo a three-stage transformation that will result in fewer, better capitalized players with revenue diversity beyond fuel ethanol,” Zuckerberg says. 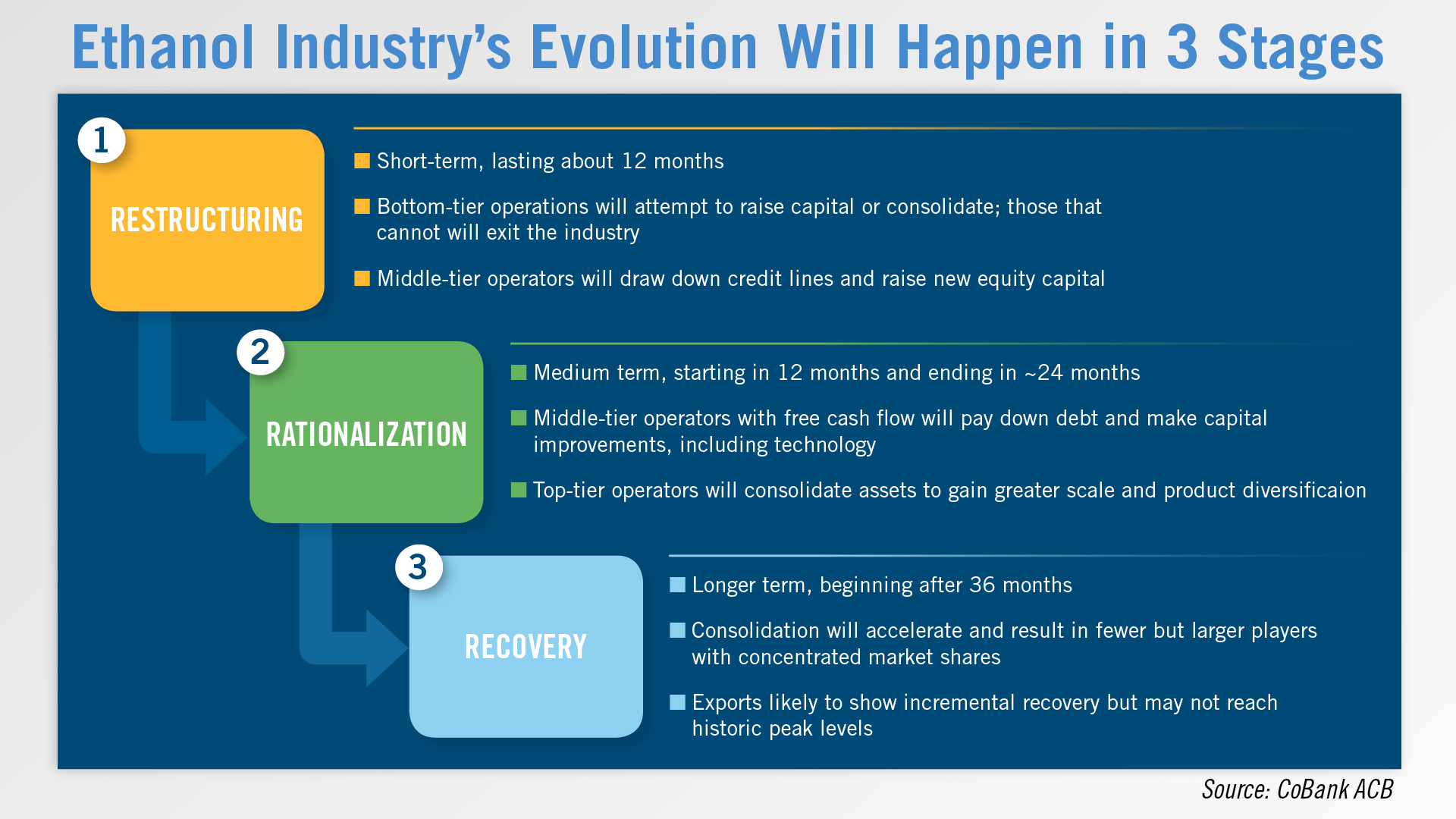 That diversity will include production of higher margin co-products, such as high protein distillers grains for animal feed, carbon dioxide for refrigeration, beverage grade alcohol, and other industrial products including those used for personal hygiene, like hand sanitizers. What will emerge is an ethanol industry that is more resilient to supply shocks and able to flex production with increases or decreases in fuel demand and exports.

According to a June update from the American Broadband Initiative, last year saw several steps taken to promote rural broadband access. However, there is much left to be done until rural America has reliable, consistent access to broadband technology.

The fight for rural broadband access is nothing new. It has been a priority issue for the Equipment Dealers Assn.’s annual Legislative Fly-In for several years.

According to a 2019 USDA report, rural broadband has the potential to bring considerable benefit to U.S. agriculture through precision farming. “Smaller producer coordination” topped the list with an estimated $2.9 billion in potential annual gross benefit. This was followed by “remote diagnostics & predictive maintenance” at $2 billion and “yield monitoring technology” at $1.8 billion. In total, the report estimated broadband could bring $254 billion in potential benefit to U.S. agriculture. 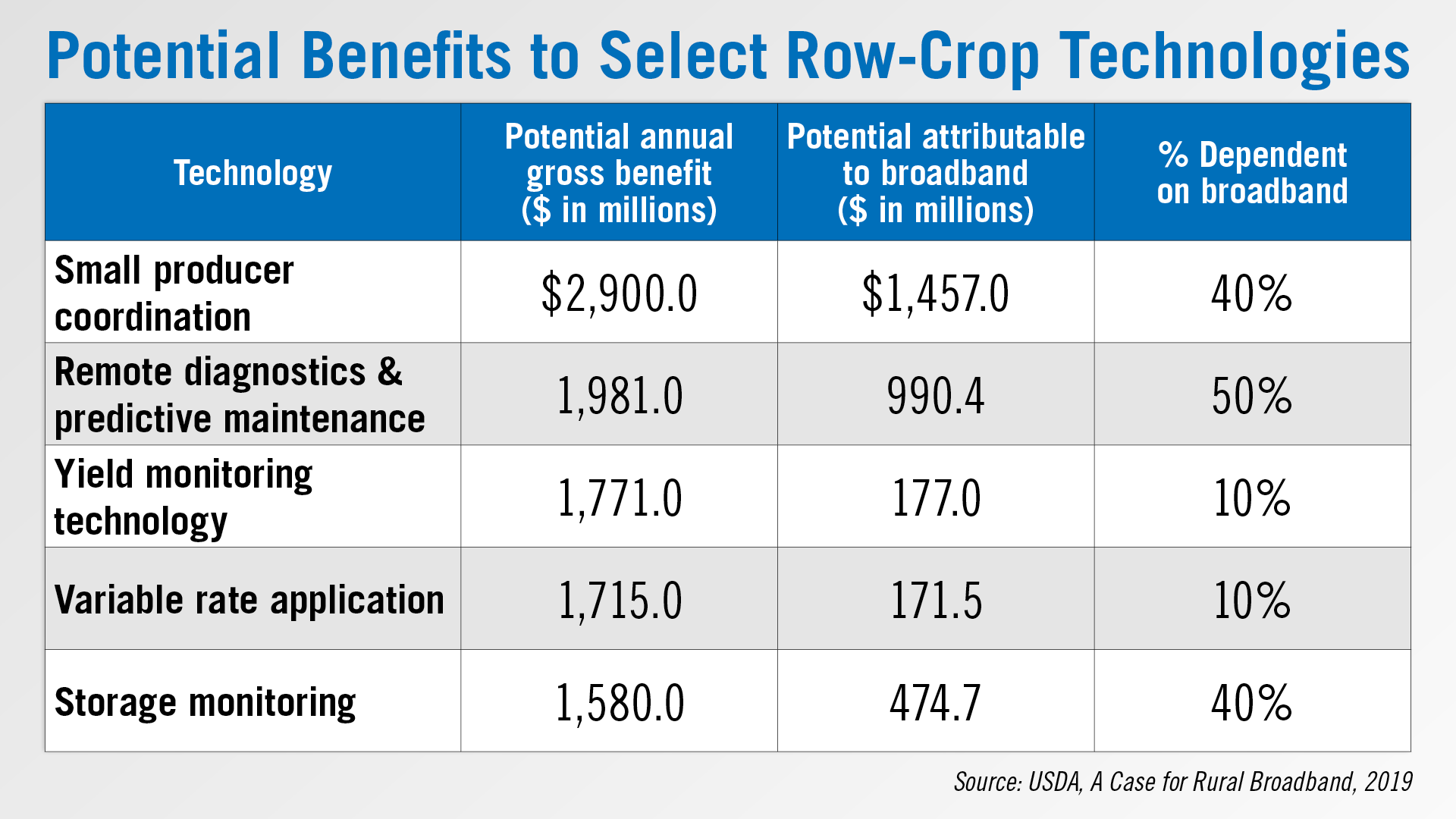 According to the American Broadband Initiative’s June update, 80% of the group’s commitments to broadband access are completed, including several for agriculture.

Additionally, the report notes several initiatives created by the Federal Communication Commission. These include its launch of the Precision Agriculture Task Force, which reviews the connectivity needs of precision agriculture. The FCC also issued a recent notice requesting to establish the 5G Fund for America. The proposed fund would make up to $9 billion available to carriers bringing 5G connectivity to rural areas.

During the farmer panel of Ag Equipment Intelligence’s 2020 Executive Briefing, Mitch Lazenby, a grower from Auburn, Ala., said he has personally experienced the problems caused by a lack of broadband access. He reports being unable to use certain equipment on his farm in the past 2 years as a result of poor signal.

According to Lazenby, a lack of broadband access will create “rural pockets,” leaving farmers behind who are unable to use the connective features of their own equipment. He believes manufacturers are incorrectly assuming all their customers have full access to broadband connectivity.