The United States exported 96,000 barrels per day (b/d) of fuel ethanol in 2019, the first annual drop in U.S. ethanol exports since 2015. Despite the decrease, total exports remained at the second highest level on record. The U.S. exported more fuel ethanol than it imported in 2019, the 10th year in a row as a net exporter.

Because ethanol production uses more than one-third of all corn produced in the U.S., farmers are faced with a significant decline in already low corn prices as the use of the fuel additive declines. Corn prices were at $3.19 a bushel on May 1, a 17.1% drop from $3.85 on March 4. At the same time, in USDA’s Prospective Plantings report for 2020 published on March 31, the agency predicted 97 million acres of corn will be planted in 2020, up 8% or an increase of 7.3 million acres from last year.

Additionally, USDA’s World Agricultural Supply and Demand Estimates (WASDE) report released on April 9 estimated greater feed and residual use for corn in 2020, with lower food, seed and industrial use, as well as larger stocks. Forecasts for corn used for ethanol were lowered by 375 million bushels to 5.05 billion bushels “based on … an unprecedented decline in ethanol production and motor gasoline consumption as a result of COVID-19.”

Brazil, the world’s second largest producer and consumer of fuel ethanol, decreased imports of U.S. ethanol for the first year since 2015, dropping to 22,000 b/d in 2019 but still accounting for nearly one-quarter of all U.S. ethanol exports. Ethanol consumption in Brazil is driven largely by a fuel ethanol blending requirement, which is currently set at 27%, and demand for hydrous ethanol (E100) that competes with traditional gasoline blends.

Ethanol in Brazil is primarily produced from sugarcane, and as a result, it is seasonally driven by the sugarcane harvest period from May through October. Brazilian imports of U.S. ethanol typically peak in between harvest seasons.

The United States and Brazil are trade partners for fuel ethanol and the U.S. also imports Brazilian fuel ethanol, especially during its sugarcane harvest season. The U.S. substantially increased its sugarcane ethanol imports in 2019 to a total of 13,000 b/d, up 9,000 b/d from 2018 levels, all of which were sourced from Brazil. U.S. ethanol imports from Brazil all entered the country in the West Coast region (Petroleum Administration for Defense District 5), likely driven by increasing standards in California’s Low Carbon Fuel Standard (LCFS) and the LCFS’s favorable carbon intensity scores for Brazilian sugarcane ethanol relative to domestic corn ethanol sources. 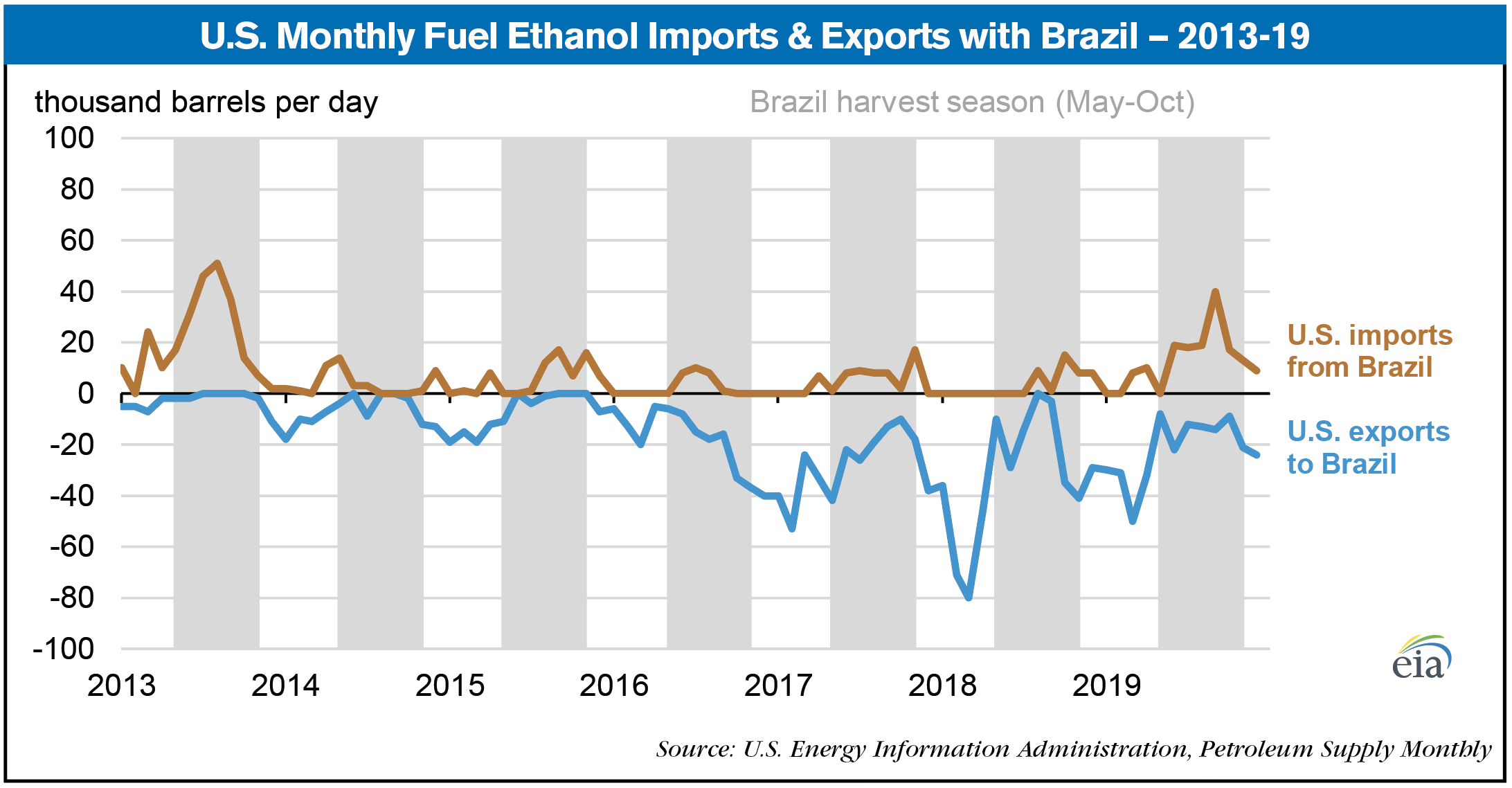 In early 2018, between sugarcane harvest seasons for Brazil’s domestic ethanol industry, substantial price discounts of U.S. ethanol relative to Brazil’s ethanol led to monthly record high levels of U.S. fuel ethanol exports to Brazil. In early 2019, some of those inter-period harvest price advantages for U.S. ethanol exports to Brazil remained, although at a lower level compared with 2018. U.S. exports to Brazil reached nearly 3 million barrels in the first 3 months of 2019 (equivalent to 37,000 barrels per day), which was 40% lower than the record level set in the first quarter of 2018.

Canada remained the second largest destination for U.S. ethanol, importing nearly 22,000 b/d in 2019, largely unchanged from the volumes imported during the past few years. Canadian demand for U.S. fuel ethanol is driven by regional ethanol requirements for gasoline across Canadian provinces, which range between 5-8.5%.

The third-largest destination in 2019 for U.S. ethanol was again India at 12,000 b/d, followed by South Korea and Colombia. The remaining 34 countries received approximately 30,000 b/d of U.S. ethanol exports.

Ethanol Imports, Exports Up in 2015

2014 Most Profitable Year Ever for Ethanol Producers, But Production Will Moderate in Next Decade