National Oceanic and Atmospheric Admn. forecasters are predicting widespread flooding this spring but do not expect it to be as severe or prolonged overall as the historic floods in 2019. Major to moderate flooding is likely in 23 states from the Northern Plains south to the Gulf Coast, with the most significant flood potential in parts of North Dakota, South Dakota and Minnesota, which could hamper planting of crops.

Ongoing rainfall, highly saturated soil and an enhanced likelihood for above-normal  precipitation this spring contribute to the increased chances for flooding across the central and southeastern United States, according to NOAA. A risk of minor flooding exists across one-third of the country. 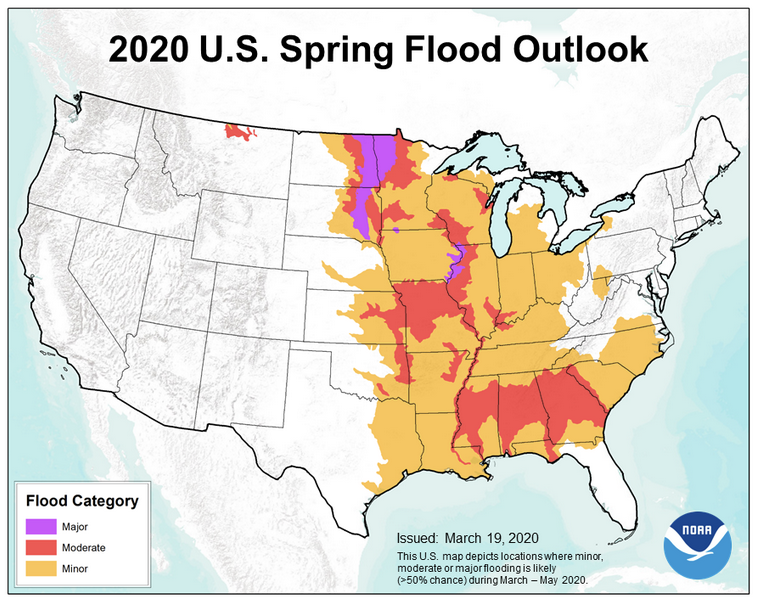 With soil moisture already at high levels across much of the central U.S., and many rivers running high in the central and eastern U.S., any heavy local rainfall could trigger flooding in these high-risk areas. The flood risk outlook is based on an integrated evaluation of a number of factors, including current conditions of snowpack, drought, soil moisture, frost depth, streamflow and precipitation.

Warmer-than-average temperatures are most likely from coast to coast with the greatest chances in northern Alaska, across the central Great Basin southward into the Gulf States, and into the Southeast and portions of the Mid-Atlantic. No part of the country is favored to experience below-average temperatures this spring.

Drought conditions are expected to persist and expand throughout California in the months ahead, and drought is likely to persist in the central and southern Rocky Mountains, the southern Plains, southern Texas, and portions of the Pacific Northwest.

Second MFP Payment on the Way, But Not All Growers Happy About It