Will There Be a Third MFP?

So far, $10.3 billion of the $14.5 billion of USDA’s 2019 Market Facilitation Program has been paid out to farmers. According to Agri-Pulse, the ag agency will decide in January whether to issue the third part of the program. But there’s no guarantee that farmers will see the other $4 billion or so of the payments designed to compensate those impacted by trade disputes.

This is because the recent U.S.-China trade agreement, which reportedly includes between $40-$50 billion in agricultural purchases, could result in USDA holding off on issuing the third  tranche of the program.

Ashish Gupta, analyst with Stephens, said in a note, “With a phase one trade deal announced we wonder if Deere's guidance (down 5% for fiscal year 2020) will end up being conservative, or if the lack of market facilitation payments will end up being a headwind in 2020. A potential 3rd payment could occur in January, getting farmers to the $14.5 billion budgeted. However, farmers may not receive any other payments in 2020. Former USDA Chief Economist Joseph Glauber estimates U.S. farmers will have a $10.7 billion net income benefit in 2019. We do not believe Chinese purchases will be enough to offset lost MFP,” said Gupta. “If there are no further payments, we worry 2020 U.S. Large Ag could end up being worse than the down 5% [that Deere projected].”

Gupta also noted that, as of Dec. 16, China had not confirmed that they would make the $40-$50 billion in agricultural purchases.

“Whether net income comes from MFP, crop receipts, PLC or ARC payments, we think farmers use net income to buy equipment,” said Gupta. “We believe profitable farmers are potential equipment buyers looking to shield taxes, regardless of the source of income. Thus, with the removal of MFP, we think there is downside risk to [current] equipment demand forecasts.” 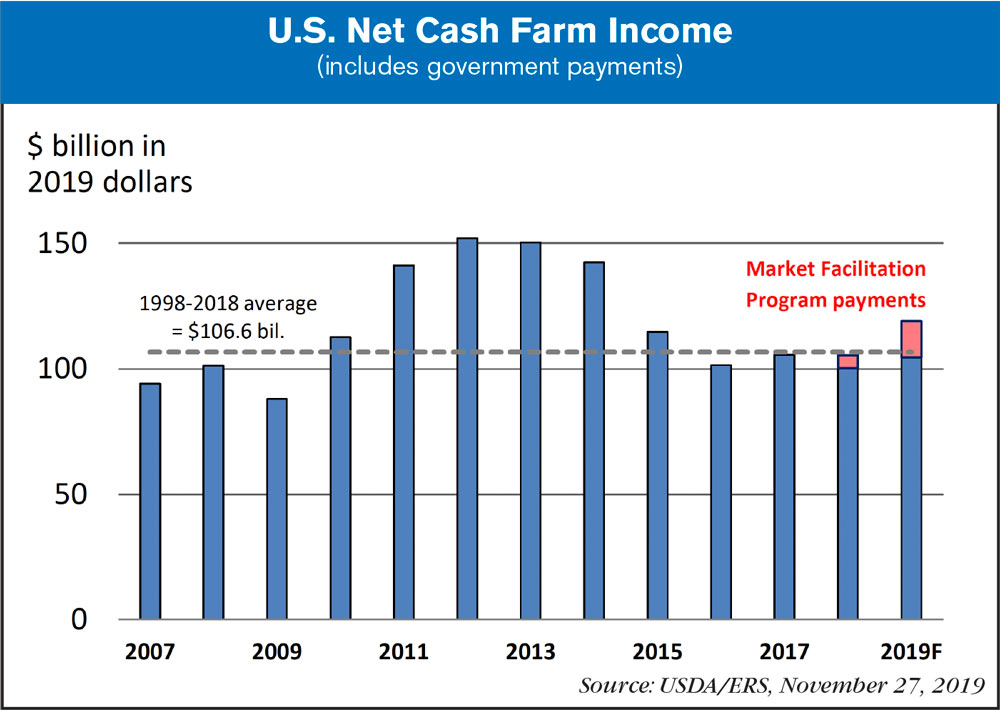 According to USDA’s Economic Research Service’s most recent report, the 2019 forecast for net cash farm income is $119 billion. But the Farm Credit Administration says based on the USDA’s historical forecast accuracy, farm income could be as low as $115.1 billion or as high as $136.2 billion.

Will Maryland Be the First State to Pass Right to Repair Legislation?