Manitou, manufacturer of equipment for construction, agriculture and other industries reported a 4% increase in sales during the third quarter of 2019 and 18% from the first 9 months of the year. Besides Manitou equipment, the company is also known for its Gehl and Mustang branded equipment.

The company reports that its order intake is down as a result of declining markets, particularly in the U.S. and Northern Europe. At the same time, Manitou expects sales to increase about 10% for the full 2019 financial period compared to 2018. 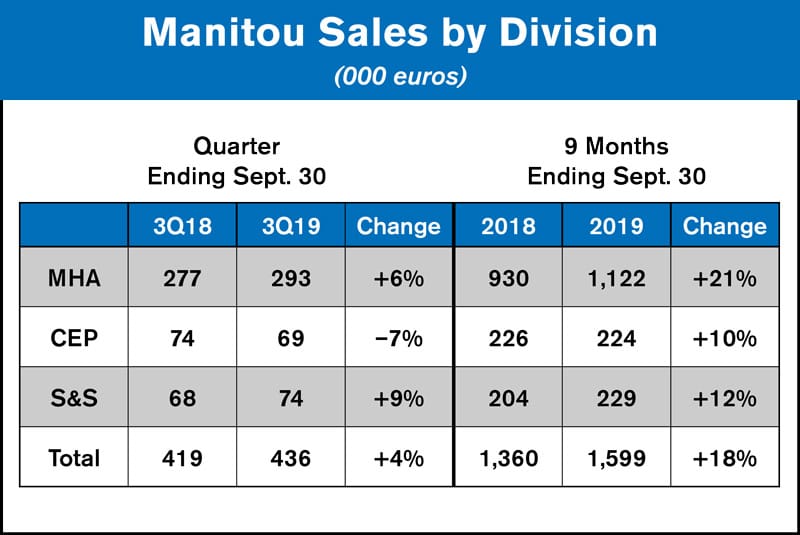 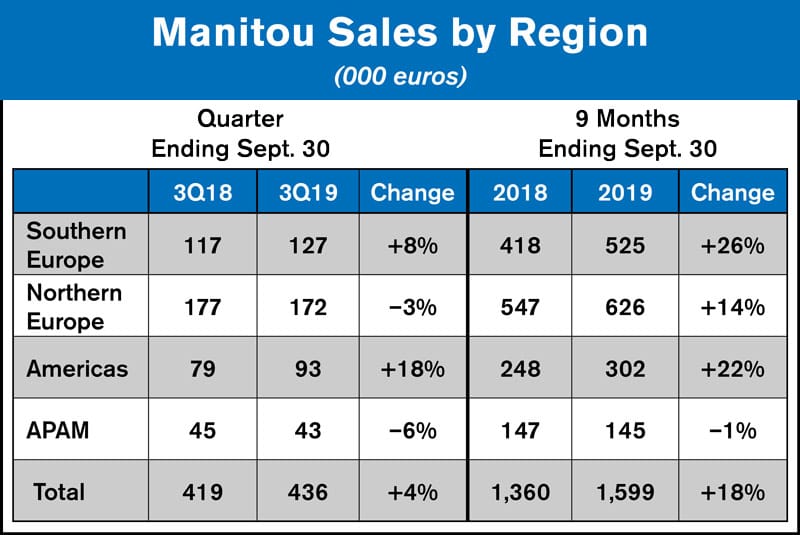 With third quarter sales of €293 million ($326 million), the Material Handling & Access Division (MHA) recorded an increase of 6% compared to same period in 2018 and a 21% increase over the first 9 months of the year (+20% at constant exchange rates). The division is continuing to adjust its production capacity to the decline in demand recorded on its markets.

The Compact Equipment Products Division (CEP) generated revenue of €69 million ($77 million), a decrease of 7% compared to third quarter of 2018 and an increase of 10% over 9 months (+5% at constant exchange rates). The floods that affected the Madison, S.D., plant led to a production shutdown over a period of 6 weeks. Its return to a normal situation will be finalized in shortly.

With revenues of €74 million ($83 million), the Services & Solutions Division (S&S) recorded an increase in its revenue of 9% compared to third quarter of 2018 and a 12% increase over 9 months (+11% at constant exchange rates). The division is continuing its development work on spare parts and attachments activities, while accelerating its growth in service activities.

Raven Posts 7.8% Gain in Consolidated Sales for FY19, But Applied Tech Revenues Down 4%