Net sales for the second quarter of fiscal 2020 were $98.1 million, down 4.5% vs. the second quarter of fiscal 2019. Each division experienced a year-over-year decline, but the majority of the decrease in consolidated net sales was driven by lower sales in Applied Technology as unusually poor spring planting conditions in the U.S. resulted in several key OEM plant shutdowns.

Operating income for the second quarter of fiscal 2020 was $10.6 million vs. operating income of $16.6 million in the second quarter of fiscal 2019, decreasing 36.4% year-over-year. The year-over-year decline was primarily driven by negative operating leverage as a result of lower sales volume. Operating income also reflected increased investment in research and development activities in both the Applied Technology and Aerostar divisions. The company has purposefully increased its investment in research and development activities to drive future growth through new product innovation and advancing current marketplace technologies.

Applied Technology's ag market conditions deteriorated significantly compared to the division's expectations at the beginning of the second quarter. Abnormally wet weather in the U.S. caused challenging field conditions which negatively impacted planting and application activities in the field and drove reductions in customer demand. According to the U.S. Department of Agriculture (USDA), U.S. farmers were unable to plant crops on more than 19 million acres in 2019. This is the highest number of prevent plant acres since the USDA began reporting this statistic in 2007. Given these challenges, several key OEMs responded with greater than expected plant shutdowns in order to recalibrate production levels to align with a lower forecast of new machine sales. This temporarily halted sprayer unit production and reduced demand for precision farming technology. As a result, Applied Technology's OEM and aftermarket demand in the second quarter of fiscal 2020 experienced a significant decline. Nevertheless, Applied Technology's 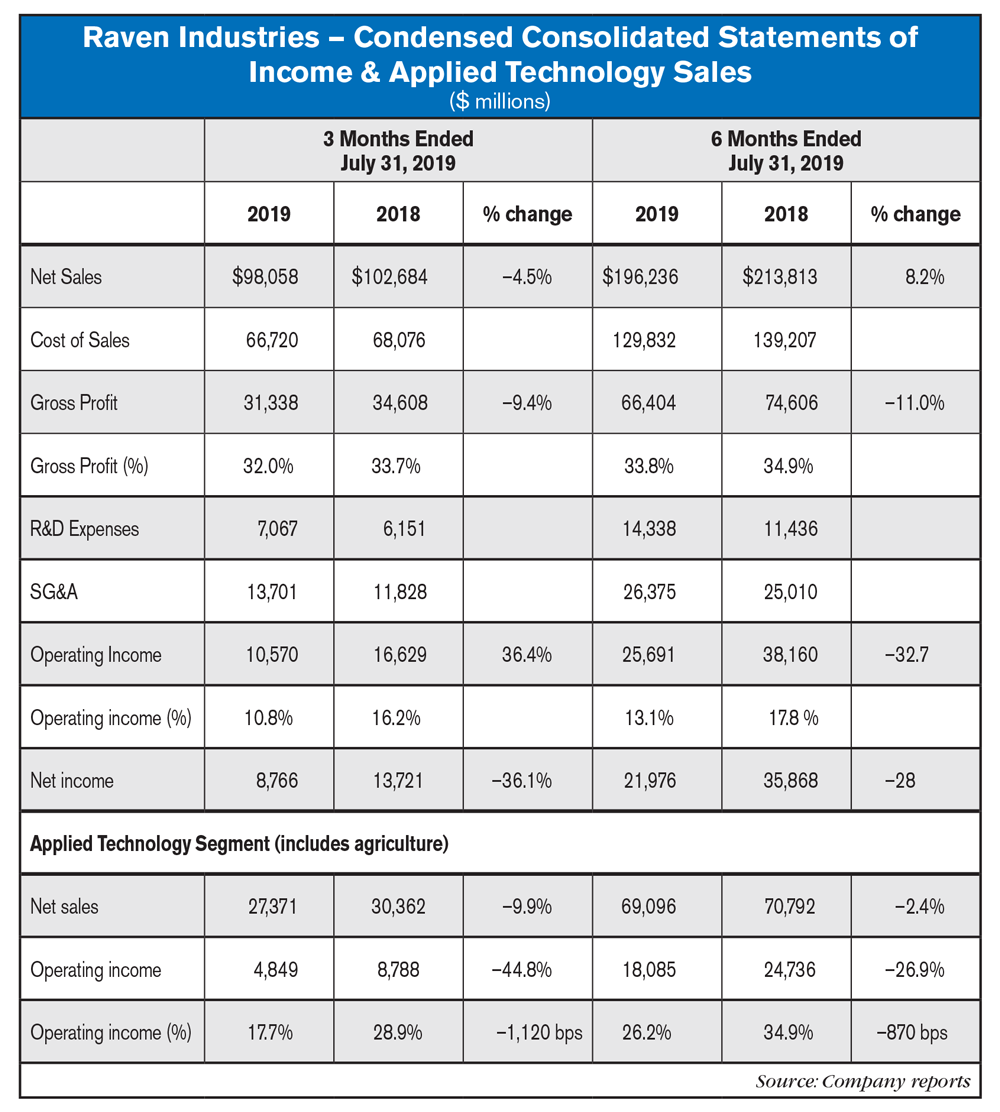 Net sales for Applied Technology in the second quarter of fiscal 2020 were $27.4 million, down 9.9% year-over-year. Geographically, domestic sales declined 13.6% year-over-year, driven primarily by lower market demand brought about by the challenging spring planting conditions. On an international basis, sales increased 3.4% year-over-year. The division continued to achieve significant growth and market share gains in Latin America as a result of its investment into the region and strong OEM relationships. The division's commitment to increase its Latin America presence and introduce its market-leading technologies to one of the world's largest ag economies is expected to be a strong contributor to the division's future growth.

Incremental investments are increasing the speed of product integration and adoption into the marketplace. During the second quarter, the division released its new Connected Workflow suite. This offering integrates Applied Technology's AgSync, Slingshot and Viper 4+ hardware and software to allow end-users to connect their home office to technology in the field and then back again. This seamless connectivity is expected to drive increased visibility by ag retailers into key performance indicators such as work, idle, and transit times. Ag retailers using the platform have experienced, on average, a 20% gain in operational efficiency by simplifying planning and work order generation, field application and invoice creation.

Raven Posts 7.8% Gain in Consolidated Sales for FY19, But Applied Tech Revenues Down 4%