While the use of new technologies to meet the demand for food from a growing global population seems to garner most of the attention these days, the more immediate challenge for farmers is coping with the growing labor shortages and the cost of regulations.

According to a new report from Tractica, an Informa company based in Boulder, Colo., numerous robotic solutions are being developed to meet these demands for precision agriculture. Increasing market penetration of unmanned aerial vehicles (UAVs), robots and automation technology on farms around the world is being facilitated by improvements in the intelligence, performance and price of sensing technologies, electric motors and drive controls. 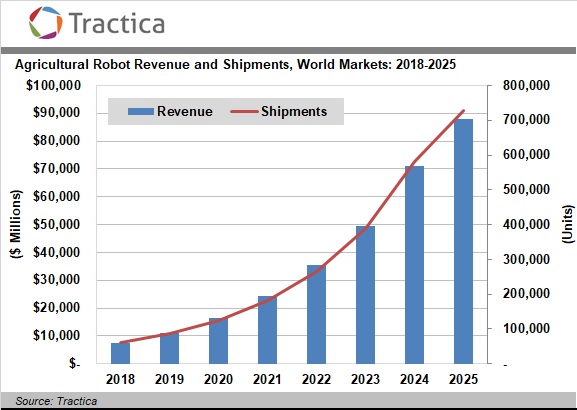 Tractica expects global shipments of agricultural robots will increase at a fast pace over the next several years, rising from approximately 60,000 units annually in 2018 to more than 727,000 by 2025. The market intelligence firm anticipates that UAVs will top the list among agricultural robot categories, followed by driverless tractors, material management robots, soil management robots and dairy management robots. The firm forecasts that such shipments will drive a total annual market value of $87.9 billion worldwide by 2025 from $7.5 billion in 2018.

He says that these factors are driving strong demand for robots throughout the farming process, including planting, pruning, weeding, pick-and-place, sorting, seeding, spraying, harvesting and materials handling.

Report Suggests Driverless Tractor Sales Could Reach $31B by 2024