The rapid rise and fall of compact tractor sales in North America during the past decade mirrors the surging and slowing of the rural lifestyle phenomena in the U.S. But according to the Mahindra USA executives interviewed by Ag Equipment Intelligence, the declining sales of small tractors appear to have finally plateaued. Slow growth during the next year or two is the likely scenario. 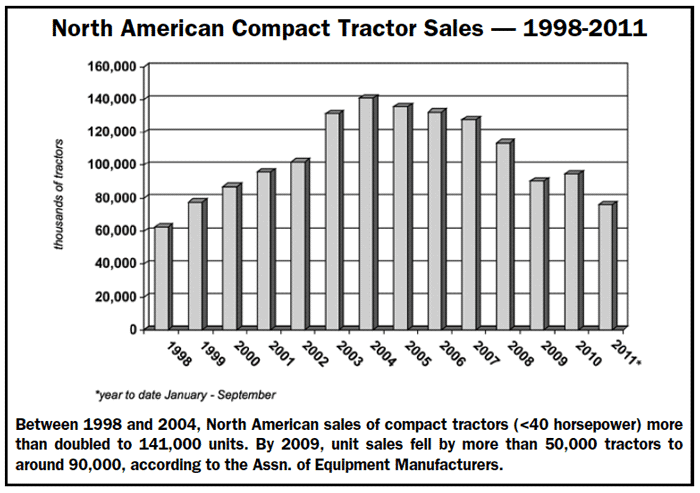 Executives from Mahindra USA, the Mumbai, India-based tractor maker that entered the U.S. market in 1994, say they don’t expect to see the kind of numbers that manufacturers and dealers saw six or seven years ago anytime soon.

“The market is still fragile and it’s subject to a variety of economic influences,” says Mani Iyer, president of Mahindra USA.

He says the main influencers on the sales of compact tractors include the employment rate, housing sales and credit availability for small business and consumer purchases. “These will need to be addressed before this market can really get back to previous sales levels,” Iyer says.

Mahindra reports that it is the biggest selling tractor company in the world based on unit volume. Its current line includes compact and utility tractors ranging from 18-83 horsepower.

“The market has been on a roller coaster ride with a lot of ups and downs in the past six or seven years,” Iyer says. “Overall, we feel the market will stabilize and be flat for 2011. Next year is uncertain, but we feel it will recover slightly and end the year up about 3% vs. 2011.”

Between 2013 and 2015, he says the market will show signs of recovery and sales will increase by 3-5% each year vs. the previous year.

It will probably take until the end of the decade for this segment to approach its sales peaks of 2003 through 2006. “If what we believe is correct, we could see numbers close to 125,000 or 130,000 units by the end of this decade,” says Iyer. “The market will eventually recover, but with higher consumer prices seeming to be the norm, we don’t believe that we will reach the peak unit figures we saw in 2004.”

With the market downturn, it’s also expected that some further consolidation of tractor makers will take place. In recent years, Farmtrac and Montana tractor brands have disappeared.

“We see the overall number of small tractor manufacturers stabilizing and possibly decreasing in the next three years,” says Cleo Franklin, vice president, marketing and strategic planning for Mahindra USA.

“However, the North American market remains attractive for new market entrants. In this price-sensitive period, tractor manufacturer’s challenges will be balancing cost while still meeting the market requirements for value-priced products that customers demand,” says Franklin. “Without the necessary scale required to compete in the industry, small tractor manufacturers will face a tough challenge.”

Franklin adds that despite the sluggish North American market for small tractors, the company plans to introduce several new 20-30 horsepower mid-compact tractors during its dealer meeting in Galveston, Texas, in January 2012.

Mahindra Says It Grew Its Brazilian Market Share in 2019

Tractor Industry to Grow 8-10% Over the Next 2-3 years, Says Mahindra and Mahindra

Small Tractor Makers Face Turbulence as Market Sorts Itself Out