Major producers view the ag economy in a much more positive light than a month ago and have also warmed up slightly to the idea of making large farm investments, according to the most recent results of the Ag Economy Barometer survey from Purdue University and CME Group.

The monthly survey from Purdue and CME Group aims to take the temperature of the overall ag economy. According to its findings, ag producer sentiment improved significantly for both current conditions as well as future expectations for the industry in October vs. the previous month. The overall Ag Economy Barometer index, which combines both readings, rose from 114 in September to 136 in October. Month-to-month shifts in barometer readings have been quite large recently due to changes in major commodity prices and news about ongoing trade negotiations between the U.S. and major trading partners, notes Purdue University ag professors James Mintert and Michael Langemeier.

Producers’ views of making large farm investments — such as the purchase of new machinery — also improved in October, though they still remain cautious about making such investments. Specifically, 72% of producers say now is a bad time to make large farm purchases, down from 78% in September but still higher than 67% in October 2017. Likewise, 24% of survey respondents say now is a good time for large investments, up from 20% in September and down from 31% in October of last year.

The survey also found optimism from producers on their outlook for commodity prices. Producers were asked to predict how prices would change over the next 12 months for corn, soybeans, wheat and cotton. In each case, more producers expect higher prices, with the ratio of producers expecting higher corn, soybeans and wheat prices being at least 3 to 1. For instance, 34% of producers say they expect higher corn prices while just 11% say they expect lower prices, and 39% expect higher soybean prices vs. 12% expecting lower prices. Mintert and Langemeier suggest these prices are a main contributor to the rising optimism among farmers. 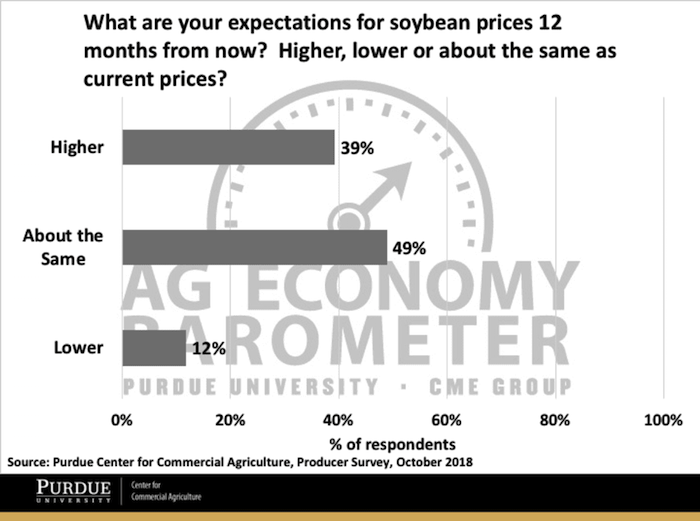 Producers on the whole view the new NAFTA deal, referred to as the U.S.-Mexico-Canada Agreement (USMCA), as a good thing. More than 60% say the agreement at least somewhat relieved their concerns about farm income for the coming year (55% say they’re somewhat relieved and 7% say they’re completely relieved). One-quarter of producers are not at all relieved and 13% remain uncertain about USMCA’s impact on farm income.

The percentage of respondents expecting both lower farmland values and higher values in the year ahead declined in October. Some 17% expect lower farmland prices, a drop from 32% in September. Meanwhile, 12% expect higher farmland prices vs. 16% the month prior. Predicting farmland prices 5 years from now, 21% expect values to rise, which is a 25 point drop from a month earlier and the lowest percentage of respondents expecting values to rise 5 years out since the question was first posed in the Ag Economy Barometer survey in May 2017.