The latest episode of Ag Equipment Intelligence’s On the Record is now available! In this week’s episode we discuss the impact the new Unites States-Mexico-Canada Agreement could have on the U.S. dairy market. We also discuss some of the results of Ag Equipment Intelligence’s recently published 2019 Dealer Business Outlook & Trends report, including dealers’ outlook for profitability in 2018 and hiring plans. Other topics covered include an uptick in credit denials for farmers and the opportunity for ethanol in China.

The U.S. and Canada reached an agreement to update the North American Free Trade Agreement on Sept. 29. The new agreement, called the United States-Mexico-Canada Agreement, or USMCA, is aimed at bringing more jobs into the U.S., with Canada and Mexico accepting more restrictive commerce with the U.S., their main export partner. 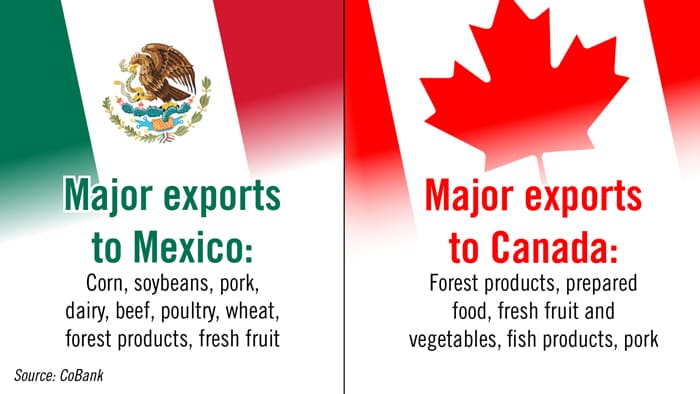 One big positive for the U.S. with the new agreement is in the dairy market. The U.S. will be able to export more ultra-filtered milk into Canada. However, Tanner Ehmke, an economist with CoBank, says that won’t fully resolve the dairy supply situation. 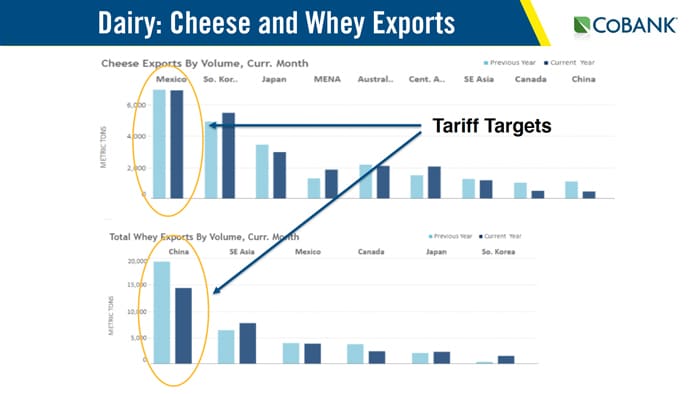 While the new agreement is a positive, Ehmke, says it’s not a game changer. However, it does take out all the uncertainty that had been in the marketplace.

It’s important to note, Ehmke says, that it could be 2020 before the USMCA is passed. He discussed the new trade deal at the Moving Iron Summit in Las Vegas earlier this month.

He says, based on where we’re at in the supply and with only slight upticks in demand from export demand, we’re probably not going to see a serious correction in dairy prices any time soon.

The World Dairy Expo was held in Madison, Wis., on the heels of the USMCA announcement. The general consensus of exhibitors we spoke to at the show said it was certainly a positive for the dairy industry, and ag in general, but that it was too soon to know for sure how much of an impact there would be.

This week’s Dealers on the Move include Prairieland Partners, Ag-Pro and Quality Equipment.

Finding and retaining precision farming talent has long been a challenge for equipment dealers, as many look to expand or evolve the scope of their business. While recent years have seen a slowdown in hiring plans, dealers are planning to be more aggressive in adding precision specialists during the coming year.

According to Ag Equipment Intelligence’s 2019 Dealer Business Outlook & Trends report, about 18% of U.S. dealers are forecasting an increase in precision specialist hiring, a 6% increase over 2018.

The report, which tracks hiring and revenue projections for the coming year, reveals that dealers for 4 of the 5 major ag equipment manufacturers forecast at least 10% growth in precision farming hires in 2019. 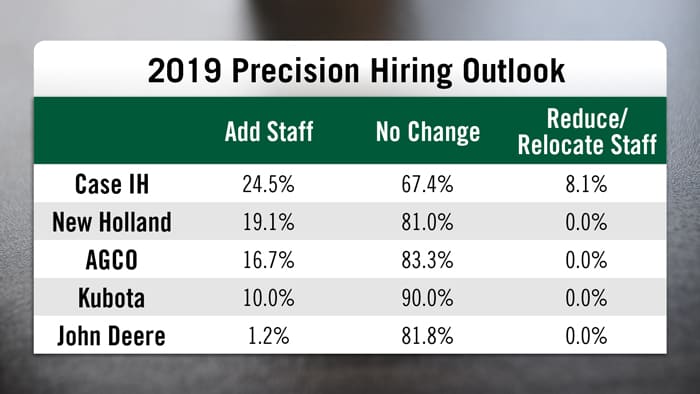 AGCO dealers plan to remain consistent with precision hiring, year-over-year, at about 16%, while 10% of Kubota dealers forecast additional precision hires in 2019.

The biggest shift is John Deere dealers, with only about 1% projecting additional hires next year, compared to more than 24% in 2018, the top percentage among the five major ag manufacturers.

Dealers Expect to be Profitable in 2018

A large majority of North American dealers who responded to Ag Equipment Intelligence’s 2019 Dealer Business Outlook & Trends survey say they will make a profit and see gross margins improve in some sectors of their business this year.

Specifically, 89% of dealership respondents say they will be profitable in 2018, with the remaining 11% indicating they would not. Dealers also answered whether their gross margins would improve in 2018 vs. 2017 for new equipment, used equipment, parts and service. 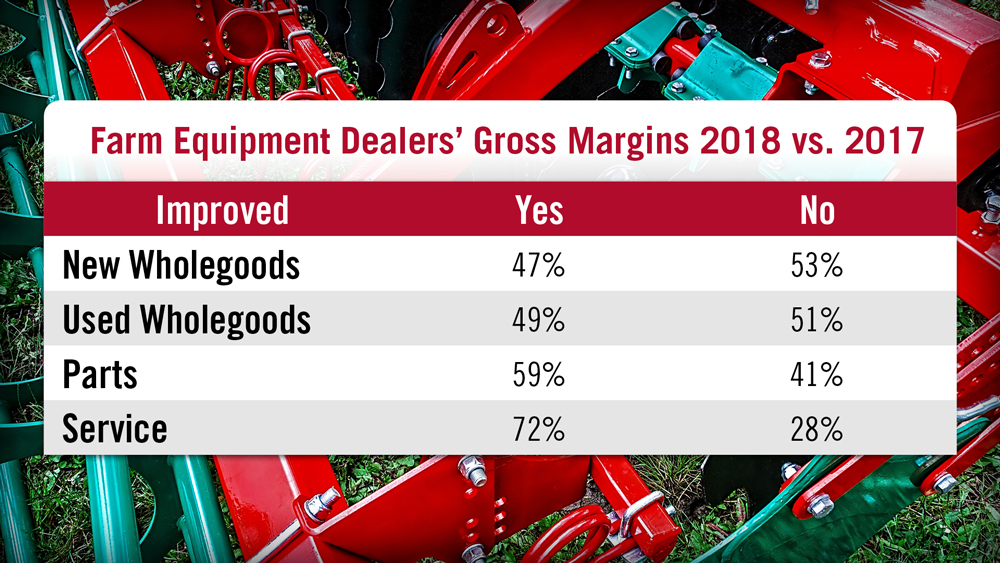 These and other results are all detailed in the 2019 Dealer Business Outlook & Trends full report, which has been emailed to subscribers.

Ahead of his visit to Iowa this week, President Donald Trump lifted a federal ban on summer sales of higher-ethanol blends of gasoline.

The lifting of the summer ban on E15 gasoline is expected to be coupled with restrictions on trading biofuel credits that underpin the program, but it is not clear whether the restrictions will be detailed or left up to the U.S. Environmental Protection Agency to decide, Reuters reports.

Iowa is the largest U.S. producer of ethanol. Steve Sukup, CFO and co-owner of Sukup Manufacturing, told Farm Equipment editors in September that ethanol needs to be part of the energy plan in the U.S. He adds that using ethanol to fuel cars will help make the U.S. more self-sufficient from an energy standpoint.

“When you’re in China, they have to do something different. Some of the industrial cities have 200-250 days there that have hazard alerts and things like that. I could see ethanol making a play in China because it gives them a clearer fuel to burn. And it’s a higher octane, so that’s a great octane source for the gasoline companies to up the octane. I’m still confident in it and they’ve got to become more energy efficient. We’re making DDGs out of it. We’re getting corn oil out of the distillation process. So we’re utilizing all aspects of it. There’s just very little waste and CO2 is the only thing out of the process that we still need to figure out. Otherwise, we’re using 90% of the product going through.”

You can hear more of Sukup’s thoughts on ethanol, the family company and more on Farm Equipment’s How We Did it podcast.

Are Credit Denials on the Rise?

As the downturn in the ag economy continues, one dealer is saying he’s noticed an uptick in credit denials for customers.

Steve Swartzrock, vice president of Swartzrock Implement, a single-store New Holland dealer in Charles City, Iowa, says he’s seen more credit denials from banks in the last 6 months than he had in the previous 6 years. Being late on payments is hurting credit for farmers who otherwise have great net worth, he says.

“The word that’s really important is timing. If these guys are late on a payment, they might have phenomenal net worth but the banks don’t want these guys that are late on payments. Then they’ve got to call them, they have to pursue them. What we’re telling our guys is, make sure you’re making your payments on time because if you’re a little slow, you’re getting dinged on your credit rating and it is really killing them right now. I’ve had guys that have phenomenal net worth but they’re lousy on their late payments. And they’re frustrated that they can’t get financing and we have to make sure these guys are making their payments on time because the banks they’re watching that timing. If they look at a credit card and say, man this guy is always 30 days late or 60 days late or 90 days late, they may just say we’ll give him to someone else. Timing is a huge issue today.”

It seems we’ve been hearing a lot of talk lately about the rising number of farmers who are getting out of the business. Some are comparing what’s happening today to the events of the farm crisis of the 1980s. 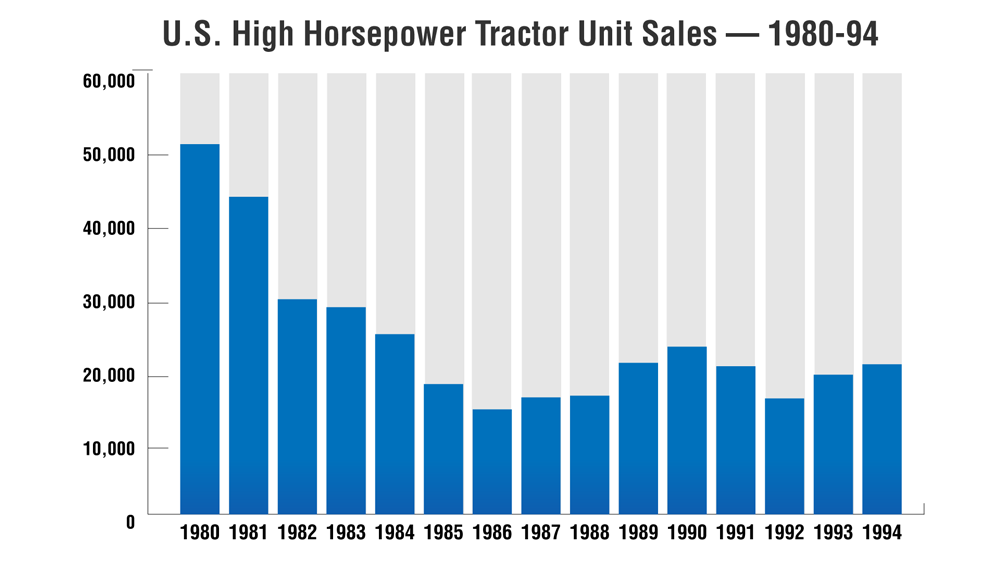 We discussed this same topic with Professor Mike Boehlje of Purdue University’s Department of Economics a few years back. He said that it’s true that farmers felt some significant financial stress in the 1980s, but it was farm equipment dealers who felt most of the pain.

He said, “But what I don’t think many people fully appreciate is that we actually had far more stress in the machinery and equipment part of the industry during that time period. The fact is, we did not lose as many farmers in the 1980s as people think.”

It was in the equipment sector where the farm crisis took its real toll. Boehlje estimates that 25% of all farm equipment dealerships closed up during that period. “One out of four machinery dealers went out of business or were merged out of business during the 1980s. Dealers didn’t have the safety net that farmers had and that situation hasn’t changed.”

While we don’t see the extent of dealership closures that took place in the ‘80s, the trends in the consolidation and farm equipment dealers has certainly reduced the number of  dealership owners.