While farm cash receipts is a good indicator of farmers’ ability to invest in new ag machinery, it’s usually net farm income that tells them to pull the trigger on equipment and other capital purchases. 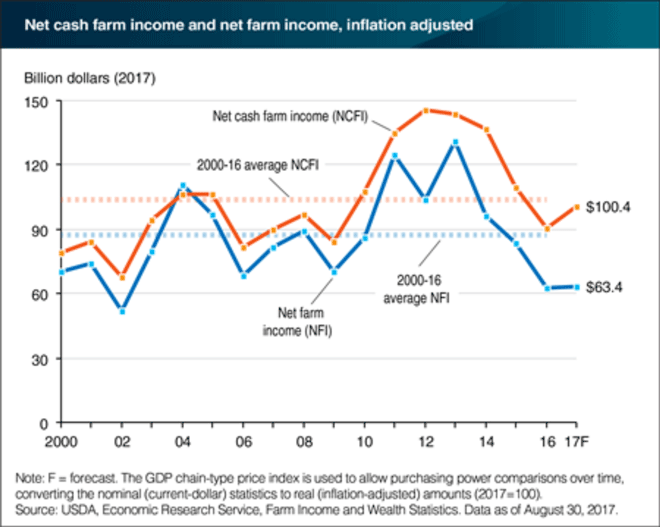 Last week USDA issued its outlook for net farm income for 2017, and for the first time in several years the ag agency is projecting an increase, albeit a small one. USDA’s report, issued on Aug. 30, says, “After several years of declines, inflation-adjusted U.S. net farm income is forecast to increase about $0.9 billion (1.5%) to $63.4 billion in 2017, while inflation-adjusted U.S. net cash farm income is forecast to rise almost $9.8 billion (10.8%) to $100.4 billion.”

The agency says the expected increases are led by rising production and prices in the animal and animal product sector compared to 2016, while crops are expected to be flat. The stronger forecast growth in net cash farm income, relative to net farm income, is largely due to an additional $9.7 billion in cash receipts from the sale of crop inventories. The net cash farm income measure counts those sales as part of current-year income, while the net farm income measure counts the value of those inventories as part of prior-year income (when the crops were produced).

“Despite the forecast increases over 2016 levels, both profitability measures remain below their 2000-16 averages, which included surging crop and animal/animal product cash receipts from 2010 to 2013,” the USDA says.

Following release of the USDA report, University of Illinois Dept. of Agricultural and Consumer Economics, Todd Kuethe and Todd Hubbs, along with Dwight Sanders of the Dept. of Agribusiness Economics at Southern Illinois University, in an Aug. 31 post in Farmdoc Daily analyzed the agency’s forecasts and estimates since 1975.

“The increase in net farm income forecasts may come as a surprise for many observers in the Corn Belt, as the region continues to experience lower crop prices, yet the increase between the February and August projections is driven, in large part, by changing expectations in the livestock sector. For example, forecasts for 2017 cash receipts in animals and animal products increased 8.4%, while the forecast for crop cash receipts increase a mere 0.3%,” say the authors. 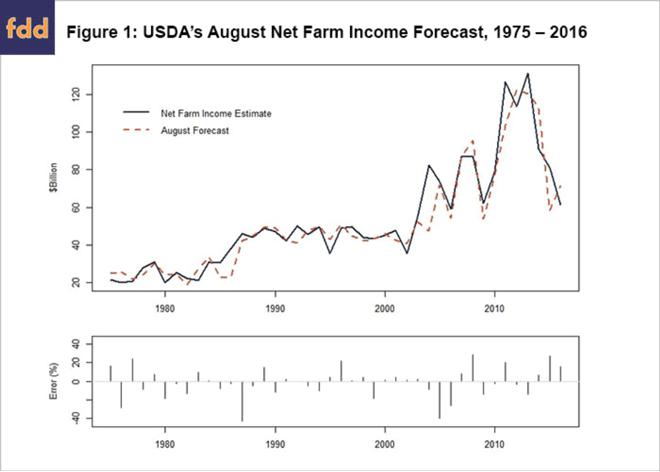 USDA Projects $35 Billion Drop in 2014 Net Farm Income; Deere Not So Much

2017 Illinois Grain Farm Net Income to Drop Below 2016, But Better vs. Earlier Forecast