One of the questions Ag Equipment Intelligence editors get asked on a regular basis is, “How old is the farm equipment fleet in the U.S.?”

Until analysts with RW Baird published their estimates of the age of farm tractors and combines within the last year or so, we hadn’t really seen any good estimates. The fact of the matter is there hasn’t been a reliable centralized system to track ag machinery. The automobile industry, on the other hand, keeps a tight handle on the age of cars and small trucks on the road, thanks in large part to mandatory vehicle registration for both new and used units.

While the pinpoint accuracy of U.S. Ag Census data has often been questioned, it remains the only generally available information out there, so it’s pretty hard to argue with. So, using data from the 2012 Ag Census we’ve been able to update RW Baird’s earlier work.

In a January 7, 2014 research report, Baird analysts using their own estimates along with USDA and Assn. of Equipment Manufacturer data, figured the percentage of combines aged 5 years or less had increased to 19% in 2012 from 12% in 2007. Tractors, excluding those with 40 horsepower or less, had increased to 13% from 12%.

Their estimates came several months before the 2012 Ag Census was actually released. In studying the newest Census numbers, Ag Equipment Intelligence found that the Baird estimates for tractors was dead on at 12.9%. Their estimates for combines was only slightly higher than what USDA eventually reported — 19% vs. 17%.

The chart is courtesy of RW Baird. An important note from the Baird report that was covered in the January 2014 issue of Ag Equipment Intelligence helps to further clarify the tractor situation. It said, “that far more high horsepower and 4WD tractors are less than 5 year old, considering unit sales of these tractors increased by 34% since 2008. For the same period, sales of mid-size tractors (40-100 horsepower) were down by 24%.” With this being the case, the age of the row-crop and 4WD tractors is probably younger than these numbers indicate. 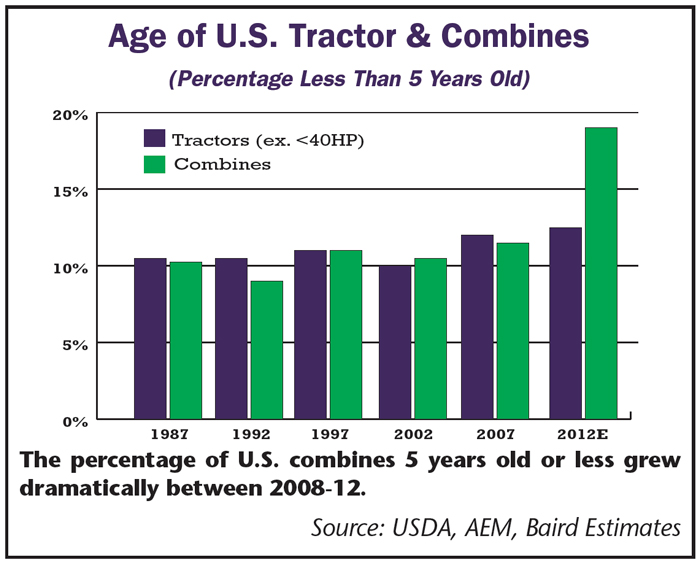 North American large ag equipment retail sales continued to decline in August, with 4WD tractor sales falling 36.8% year-over-year, combine sales down 24.3% and row-crop tractors down 9.3%, according to the latest numbers released by the Assn. of Equipment Manufacturers.

U.S. and Canada large tractor and combine retail sales decreased 17% year-over-year in August, down from the 10% decrease in July. U.S. sales were down 19%, while Canadian sales were down just 1%.

Combine retail sales also fell, posting a 24.3% year-over-year decrease in August following a 30.1% decrease the previous month. U.S. combine inventories were 2.6% lower year-over-year in July vs. down 1.2% last month. August is an above- average month for combine sales, accounting for 12.3% of annual sales over the last 5 years. 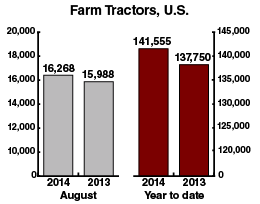 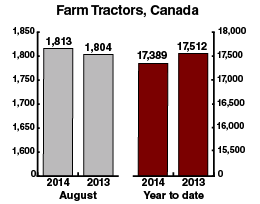 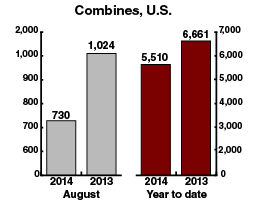 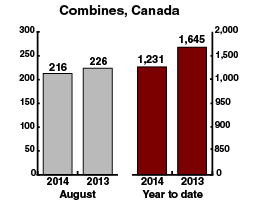 How Old is the U.S. Fleet of Farm Tractors?

Farm Lending Continued to Rise in 2Q, But Not for Equipment