According to a September 9 AP report, the strengthening American economy, combined with a gloomy outlook for growth elsewhere, is pushing the U.S. currency higher. The dollar is up 6.4% against many major currencies since the start of May and has risen in 3 of the past 4 months. In recent weeks, U.S. currency climbed to its highest level in 6 years vs. the Japanese yen. It’s also trading at its highest level in 14 months against the euro. This means lower prices for products imported into the U.S. and higher prices for U.S. exports.

The effects of the strong dollar, along with falling ag commodity prices, are showing up in decreased exports of U.S.-made farm products. According to a September 5 report from the Assn. of Equipment Manufacturers, through the first 6 months of 2014, exports of U.S. ag machinery dropped by 27% vs. the same period in 2013. During January through June of this year, the value of U.S. exports of farm equipment was $4.77 billion. This compares to $6.53 billion during the first half of last year.

All world regions experienced declines, from South America with a drop of 8% to Asia, with a 35.7% decrease in purchases of U.S.-made agricultural machinery.

The combination of a strong dollar and an oversupply of crops are expected to affect overall sales of U.S. farm machinery. USDA’s September 11 World Agricultural Supply and Demand Estimates projected even stronger yields for corn and soybeans than its earlier outlook (see accompanying table), which had the expected effect of lowering per-bushel pricing of the crops.

Through September 9, year-to-year corn prices were down 24.8%, soybeans were down 25.7% and wheat was down 16.8%. But the strong dollar appears to be offsetting the effect of falling prices for U.S. corn, soybeans and other crops.

The U.S. ag agency is forecasting that agricultural exports for fiscal 2015 will decline compared to the record exports during fiscal year 2014. According to the August 2014 Outlook for U.S. Agricultural Trade,” fiscal 2015 exports are projected at $144.5 billion, down $8 billion from the record $152.5 billion forecast for fiscal 2014, primarily because of the outlook for lower commodity prices.

Lower prices are projected to reduce fiscal 2015 exports of oilseeds and products by $5.1 billion and cotton by $600 million, while lower prices and volumes reduce grain and livestock feed exports by $4.9 billion, compared with fiscal 2014.

Lower prices and exports of U.S. crops will inevitably impact farm equipment sales. In a September 11 note to investors, C. Schon Williams, analyst with BB&T Capital Markets, said, “The WASDE report is relevant to ag machinery names in that it helps predict crop cash receipts, the best leading indicator for ag machinery sales. Based on the latest WASDE release, our estimates now indicate that farm cash receipts will be down 15% year-over-year (vs. 10.3% last month) during the 2014-15 growing season.” 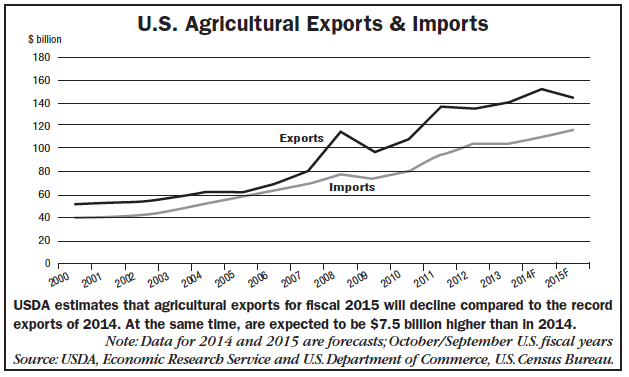