In today's newscast we dive into a new report from Goldman Sach's on the $240 billion market that exists for precision farming technology to address the 70% increase in food production by 2050, Farmobile's acquisition of Prime Meridian, an increase in landscapers equipment spending, Deere's June retail sales, Art's Ways second quarter earnings and Clean Seed Capital's acquisition of Harvest International.

Improving Crop Yields: A $240B Opportunity

Worldwide adoption of precision farming technologies will be needed to meet a 70% increase in food production by 2050, according to research from Goldman Sachs, a global investment banking, securities and investment management firm. In the face of this challenge are growing opportunities for ag machinery makers and dealerships. With a need for greater yields identified, researchers estimate a $240 billion addressable market in these technologies.

In a report on precision farming released in July, Goldman Sachs researchers say the increase in food production over the next 35 years will largely have to come from greater yields driven by new technology in precision farming, as available acreage is only expected to grow by about 4%. 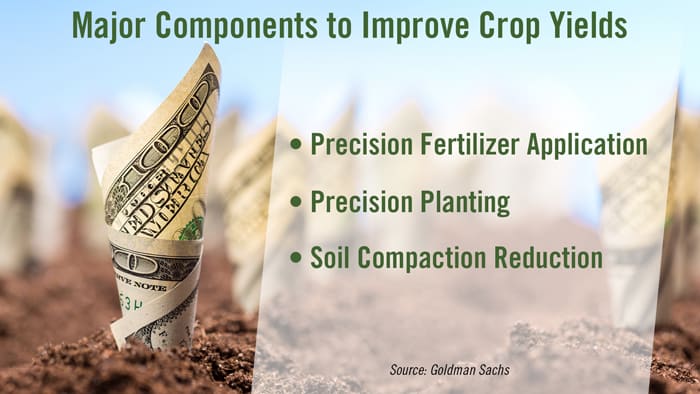 According to the authors of the report, the most advanced solution in reducing compaction could be autonomous driving technology. Driverless machines allow farmers to use smaller equipment with the same effectiveness and scale as the larger, heavier equipment. For instance, farmers could use a fleet of under 100 horsepower tractors rather than one or two 600 horsepower machines to do the same job.

Steve Cubbage, the former president of Prime Meridian, now joins Farmobile as vice president of the DataServices team. At the InfoAg show in St. Louis this week, I sat down with both Cubbage and Farmobile CEO Jason Tatge to discuss the implications of the acquisition.

As explained by Tatge, DataServices will streamline the certification of electronic field records for growers, distinguishing quality data that can potentially used to generate revenue. Those field records serve as the nucleus for Farmobile’s DataStore, launched earlier this week as the first private digital exchange platform for machine and agronomic data between growers and purchasers of data.

The DataStore, Cubbage adds, aims to give farmers the ability to leverage their data and accept or reject bids from buyers in a secure format.

"It's a new opportunity for growers to sell a new crop, and that crop is data. Truthfully, this is new opportunity that growers haven't had in the past, and those that really want to look into it, there is a difference between good and bad data. Good data has value in the marketplace, and truthfully that's what we want to see. It's certainly an opportunity that drives other opportunities on the farm. Good data also means good decisions at the farm level, but now there's an opportunity to get $2-$4 ... hopefully $10-$20 an acre per year by selling data in the marketplace to research farms, to universities. The host of buyers is ... we probably don't even know yet. The nice thing is the grower is in control. He makes the decisions who that buyer is, and whether or not he wants to sell.."

As it currently stands, Tatge says the DataStore has one million acres worth of data available for sale.

Landscapers to Up Equipment Spending

With sales of rural lifestyle-type equipment tied closely with the overall health of the U.S. economy, the improvement in U.S. retail spending is good news for dealers of small machinery as landscape contractors say they plan to increase investments in new power equipment. 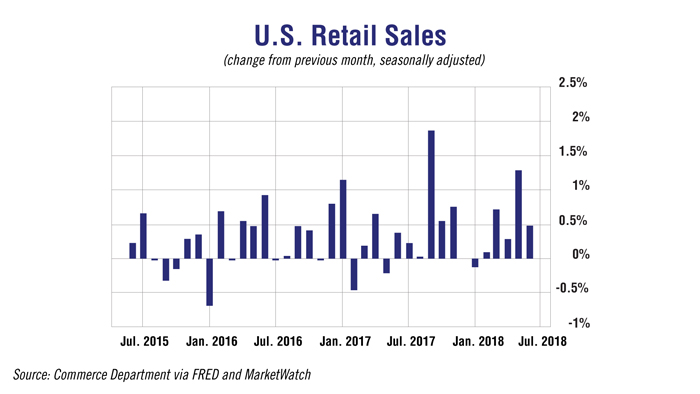 On July 16, MarketWatch reported retail sales rose again in June after a mammoth gain in May. Sales at retailers nationwide grew 0.5% last month, which followed an even bigger surge of spending in May, when sales grew a revised 1.3%. Overall, retail sales have increased 6.6% over the past 12 months, slightly above the long range average since 1980. 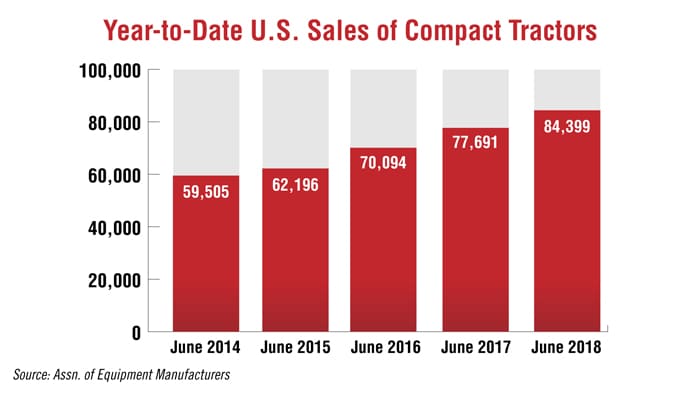 Consumer confidence is also showing up on dealer lots. On July 10 the Assn. of Equipment Manufacturers reported that year-to-date North America sales of compact tractors were up by 8%, or by more than 6,700 units, vs. the same 6 month period in 2017. U.S. sales of small tractors were up by 8.3% and in Canada by 3.8% during the first half of the year.

The ongoing strength in consumer and commercial markets is further borne out by the results of Seaport Global Securities’ most recent survey of North American landscape contractors. “Our latest quarterly survey revealed that the capex outlook for 2018 improved for the second consecutive quarter, in line with an improvement in revenue expectations,” says Michael Shlisky, SGS analyst. 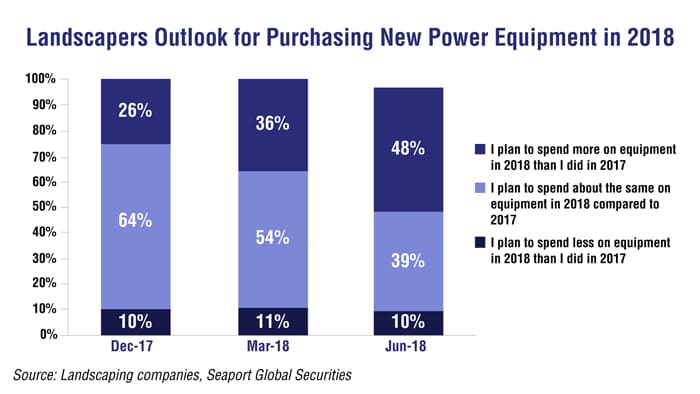 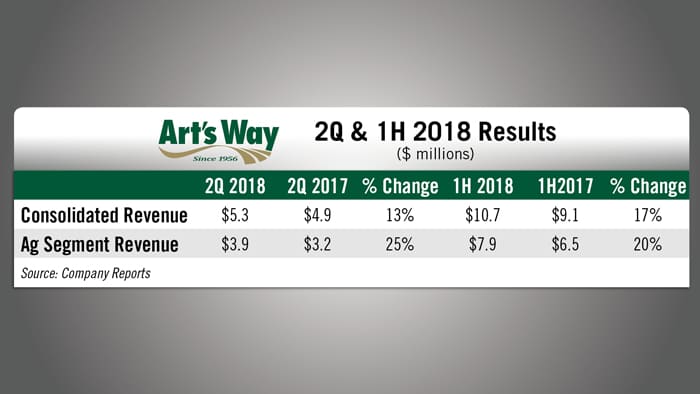 CEO Carrie Gunnerson says there is a lot of noise and uncertainty in all the markets Art’s Way serves in relation to the steel tariffs and how they are impacting commodity prices. She says they’ve seen significant increases in input costs and in turn have raised their prices. The pressure from tariffs has been particularly felt in the ag segment, which makes up about 70% of Art’s Way’s total business. Gunnerson says just as the company started to see orders pick up this new complication moved into their marketplace. While Art’s Way moved quickly to increase prices, the majority of year-to-date sales had been booked in December of 2017.

She adds that new incoming orders will be at the new higher prices and new orders have slowed due to concerns over commodity prices.

Deere & Co. reported on its North American retail sales for June on July 10. With the exception of 4WD and high horsepower tractors, the company’s sales were either in line or better than the industry average. 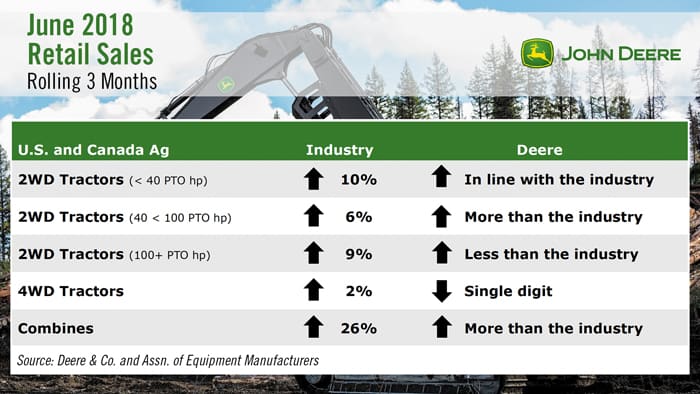 Earlier this week during the Ag in Motion outdoor farm show in Saskatoon, Sask., Clean Seed Capital Group announced it has signed an agreement to acquire Harvest International. 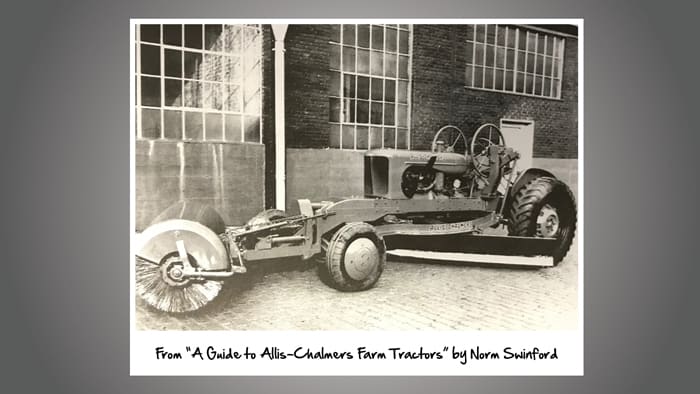 The Allis-Chalmers W Speed Patrol, manufactured from 1940-1949, was an example of how farm tractors could fit industrial applications as well. Besides road maintenance, small contractors used them for street and driveway construction. Over 3,700 were built at the LaPorte and Springfield plants.

As always, we welcome your feedback. You can send comments or story suggestions to kschmidt@lessitermedia.com. Until next time, thanks for joining us.

What Do Severe Storms in Iowa Mean For Crop Yields and Ag Equipment Sales?