In today’s newscast, we discuss some of the trends and innovations we saw at Agritechnica, the ag waiver for the Electronic Logging Device Rule, how precision technology is playing into the market share equation in Germany, Mahindra’s growing presence in North America, new startup company Agrodeviate and Deere & Co.’s latest earnings report.

The official theme of this year’s show was “Green Future — Smart Technology.” From oil caps that alert the operator when an engine needs service, to artificial intelligence and data collection and sharing, smart technology and telematics were a clear trend among the new product introductions.

Precision technology was prominently featured at the show, with about 700 exhibitors showcasing the latest hardware, software and machine components. Some of the trending technologies included introductions of comprehensive precision platforms, combining GPS capabilities, machine automation and data transfer into a single solution. Remote sensing tools and autonomous vehicle prototypes also continued to emerge with smaller, mobile devices making their debuts at Agritechnica.

We’ll have more coverage on the products and innovations we saw at Agritechnica in Farm Equipment’s January Showcase edition.

The U.S. Department of Transportation’s Federal Motor Carrier Safety Administration (FMCSA) announced that in advance of the Dec. 18, 2017 implementation of the Congressionally-mandated electronic logging device (ELD) rule, a 90 day temporary waiver from the ELD requirement for transporters of agricultural commodities, formal guidance specifically pertaining to the existing Hours-of-Service exemption for the agricultural industry, and guidance on the “personal conveyance” provision.

The ELD rule is intended to create a safer work environment for drivers and make it easier and faster to track, manage and share records of duty status data. An ELD synchs with a vehicle engine to automatically record driving time to provide more accurate hours of service recording. 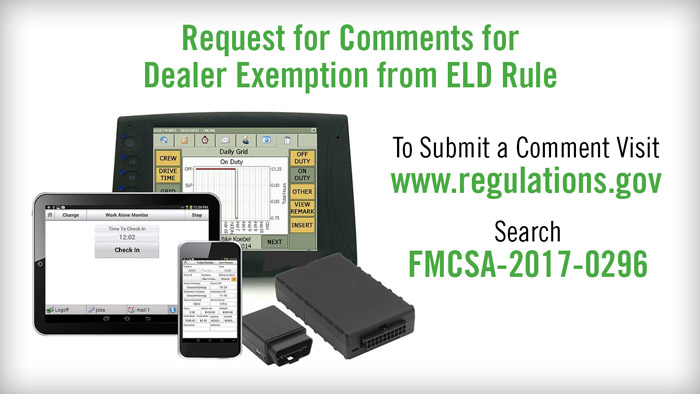 According to the Equipment Dealers Assn., the comment period for the permanent exception is still open. Dealers can submit their comments on www.regulations.gov by searching FMCSA-2017-0296 in the keywords box. The comment period ends Monday Nov. 27.

This week’s Dealers on the Move are C&B Operations and Ag-Pro Companies.

Market share is viewed as a measurement of success, especially among farm equipment manufacturers in the U.S. But the landscape — both literally, and figuratively — is different in Europe.

With a mix of small and large operations — some topping 1 million acres — and diverse crop rotations, farm contractors often perform the majority of field operations, including seeding, fertilizer application and harvesting.

There isn’t a dominant brand in the market, so landing and keeping farm contractors in Europe is big business, a point that was emphasized by Klaus Braunhardt, director of precision ag solutions for John Deere in Europe.

During my visit to the company’s manufacturing facility in Mannheim, Germany, ahead of Agritechnica 2017, Braunhardt spoke on the influence a reliable, comprehensive precision service platform can have on contractor’s equipment purchasing decisions.

“So we have several service packages that we provide to our contractors, that include fuel guarantees, that include uptime, that include service part packages to get at a discount if the customer has remote display access. So, that he and the dealer can see the operation. The dealer is important in this also. He needs to be the one-service stop for those contractors, and being able to connect to the machines and being able to send that information to the machines, diagnostic information, for example, and repair information. Also, just to look at the operator’s terminal and make ad hoc fixes and recommendations is a big deal for our contractors because uptime for them, is money. For every minute they sit, and don’t plow, and don’t apply or don’t harvest, that’s wasted money.”

Braunhardt added that the vast majority of forage harvesters and combines produced in Europe are being run by farm contractors, with some running 50-60 pieces of equipment in a multi-colored fleet.

On Nov. 20, the Mahindra Group opened its new Mahindra Automotive North America headquarters and assembly facility in Auburn Hills, Mich. The new venture will help grow the Indian company’s footprint in the U.S. beyond tractors and utility vehicles. Initially, Mahindra plans to build off-road vehicles at the new factory. However, the company has a larger goal of selling cars in the U.S., the Wall Street Journal reports.

The expansion is part of a $230 million investment in Southeast Michigan that also includes a recently opened warehouse and logistics operation in Pontiac and an existing prototype operation in Troy.

“The wonderful thing about this extension of the Mahindra brand is that we of course began selling tractors in 1994 and quickly rose to number 3 in the U.S. and North America the 0-120 [horsepower]. That gave us an opportunity to extend into the utility vehicle business, which we have our new utility vehicle that has done very well in the marketplace. With this extension and the creation of MANA, they’re going to do two things. First, they are looking to launch a new off road utility vehicle, which is unlike anything in the segment which will of course be assembled and distributed by MANA and it’s going to be called Roxor. Now what does that do for us? It gives us an opportunity like tractors and utility vehicles gave us the chance to extend the core. Roxor does the same thing. It extends the base we currently we have. So the question regarding anything beyond that, we look for more future plans because the sky’s the limit for Mahindra.”

According to Forbes, Mahindra has an agreement with Ford Motor Co. to explore synergies between the two companies. But the company has also purchased Korean company SsangYong Motor and Italian design studio and custom builder Pininfarina.

Mahindra Group chairman Anand Mahindra suggested that on-road vehicles may eventually be branded by Ssangyong, especially in the electric and hybrid categories, and that it would draw on Pininfarina to design upper-end electric vehicles.

Mahindra is also getting involved with the Internet of Things with TechMahindra, which currently operates in 90 countries working with over 864 global customers from a variety of industries, including automotive, healthcare process manufacturing and consumer goods.

Rodney Haarberg, former senior vice president of Orthman, has started a new company focused on product innovation lead by agronomics. Agrodeviate, the new company, will focus on designing and adapting a product to the specific conditions and needs of the customer, Haarberg says.

The company will pull from his experiences both on the mechanization and tillage side at Orthman and the technology sector from his time spent both at Trimble and Topcon.

“So Agrodeviate is actually the corporation name, but Agrodeviate as you describe the core would be product innovation. We’ll have agronomists on board and in fact we do have agronomists on board and so all the product design will be leveraging technologies, information from really all across the world and all facets, trying to integrate to make a better product. It’s not just about weight or price or girth or any of those pieces, but more about productivity. And so, Agrodeviate is a stand-alone office where engineers in a very unique culture can work on these product plans and really bring rapid turn designs to the market. In addition, Agrodeviate to ultimately deliver this to the producer will have a distribution arm and this distribution arm will be more of a direct retail scenario that allows us to work closely with the producer to get feedback about products they need and at the same time deliver products to them and understand their application needs and should keep us very regionally focused instead of single product for everyone but allow us to adapt to the needs for different soil conditions or crops or whatever that might be.”

Haarberg says the whole approach of the new company is to do things differently. He says, “There’s no reason to do things the same way if we can find a better way,
whether that be type of design, different use of material, the synergy with technology or even the agronomic service element that I think we can add.” 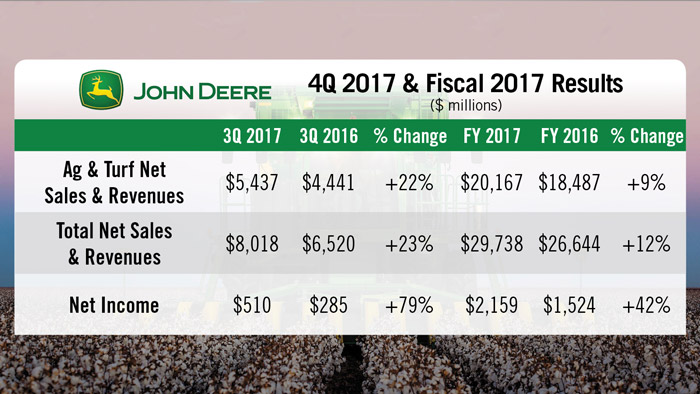 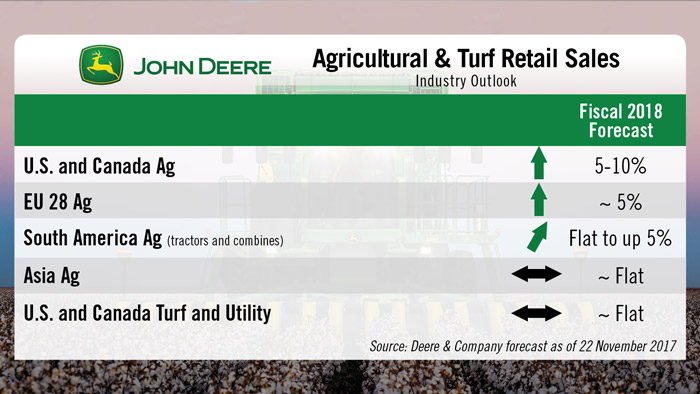 Net sales for the ag and turf division were up 22% in the fourth quarter and up 9% for the full year. Total net sales and revenue for the quarter were up 23%.

Fifty years ago, John Deere introduced its breakthrough first-to-market articulated motor grader. The JD570 featured front-wheel and articulated frame steering, offering operators more maneuverability than ever before. The JD570 was also the first grader to have a cab and canopy with the rollover protective structure available from the factory.