In today’s newscast, we report on Titan Machinery’s fourth quarter and fiscal 2017 results, Deere’s more positive “mood” on market conditions, the opportunities and threats that come along with online equipment sales, dealers’ sales forecast for the year and Raven’s fourth quarter earnings.

The largest dealer of farm equipment worldwide, Titan Machinery, reported its fourth quarter and full fiscal year 2017 results on March 30. Total revenues for the quarter were $317.6 million, down about 5.3%, and $1.37 billion for the year, a drop of about 11.3%. 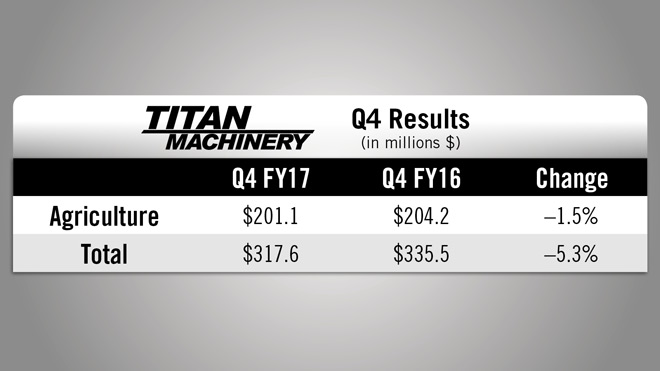 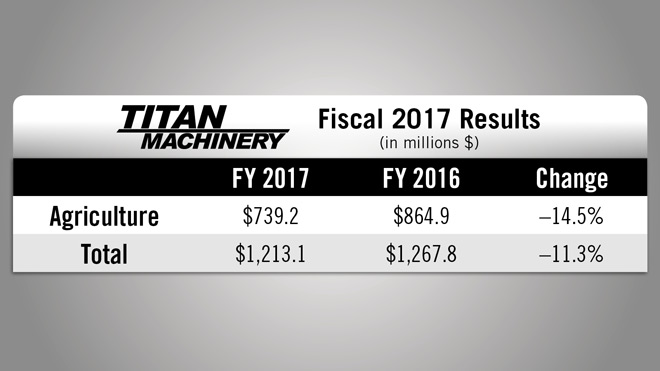 Parts revenue rose by 1.6% and services revenues were up 1.5%, the first year-over-year increases in 10 quarters, according to Mig Dobre, analyst with RW Baird.

Titan also reported its equipment inventory declined by 33%, or $196 million, during the past year.

On the Record spoke with Titan chairman and CEO David Meyer shortly after the dealership group announced its earnings.

“In our fiscal 2017, which ended on Jan. 31, we took the steps necessary to manage through another year of soft demand while laying the groundwork for increased profitability and future growth.  In particular, we aggressively reduced our equipment inventories, by nearly $200 million dollars, along with ongoing focus on our operating expenses.  This has allowed us to continue to generate solid adjusted cash flow from operations despite the down market.

We also began to implement a restructuring plan to consolidate some dealership locations and reorganize to our ‘expert team’ operating model. Taken together, these changes will further reduce costs while enabling us to leverage our scale and expertise to better serve customers across parts and service, new and used equipment, rental, precision farming, and more. Foremost, this new approach focuses on growing and delivering the best product support possible to help our customers and Titan Machinery stay ready and strong whether markets are up or down.

We have also reduced our floorplan payables and long-term debt by $610 million dollars, or 63%, over the past 3 years. Overall, we're in a much better inventory position, we continue to generate positive cash from our operations, and we're getting more efficient and focused on high-margin business and customer experience. This should help us achieve a slight profit in fiscal 2018 and set the stage for future profitable growth, both organically and through acquisition opportunities in the U.S. and abroad.”

Following a recent meeting with top executives at Deere & Co., Citi analyst Tim Thein said, "The overall mood from our time with the CEO and CFO of Deere was a bit more positive than we expected and supportive of our view that positive estimate revisions can continue,” according to a published report.

“Deere is producing to retail for large ag for the first time since early 2014,” says Thein. “The CEO also noted a positive mood among farmers and ag dealers during a recent visit to Brazil and Argentina. Deere remains optimistic that its 5-year stretch of net share gains can continue. Commentary on Argentina was equally positive.

“Optimism among its North American construction dealers and customers remains high, supported by a strong order rebound. Our sense is Deere is taking a more measured approach to build rates,” reports Thein.

Online ordering is an increasingly popular and convenient purchasing method for consumers. Just this past week, Amazon launched its Prime Now, which offers 1- and 2-hour home delivery of among other things, household items or groceries.

So could the same speedy delivery trend one day be adopted by farm equipment dealers? In some respects, it already is, with growing online availability of parts, precision farming components and even wholegoods that can be quickly stocked and shipped to customers.

But developing a broad scale online business presents some global challenges for dealers, according to Howard Pullen, a longtime independent European distributer of farm equipment.

Talking with Pullen at this year’s SIMA Agribusiness Show in Paris, he suggests retailers looking to develop or expand their online equipment business be protective of their property. Fraud and online scams are growing concerns among overseas distributers and Pullen shared his own cautionary tale.

“There are some dangers with the internet and I’ve experienced the possible fraud of someone trying to sell one of my tractors online to a third party by taking information and the transaction nearly happened. So it’s really quite a risk, and you have to be careful about the machine and putting serial numbers and too much information on internet sites is very dangerous.”

Still, with the proper safeguards in place, Pullen sees growth potential in online sales of farm equipment, to the point where dealers may end up partnering with third-party internet resellers to complement machinery sales at brick and mortar stores.

Dealers’ outlook for 2017 sales growth has improved, according to Ag Equipment Intelligence’s latest Dealer Sentiments and Business Conditions survey. In the March survey, on average dealers were forecasting sales to be down 2% this year. This compares to a forecast of down 4% for the previous 3 months. 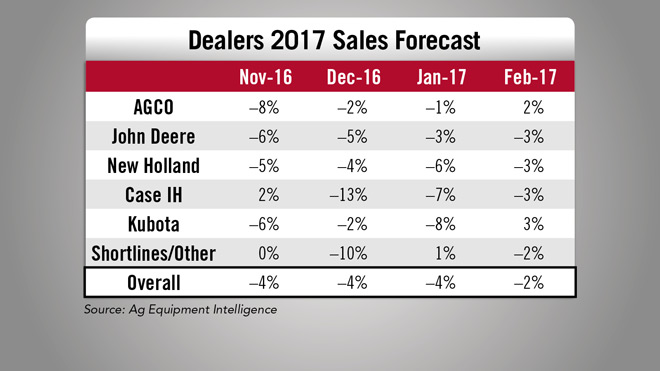 One dealer commented: “The strength seen at the end of 2016 has persisted through February. Our tractor and planter sales were strong this month.” Another dealer commented that slight improvements in the dairy market may spur hay tool sales this year.

Yet another dealer said both tractor and hay tool sales were strong in February and they anticipate seeing growth rates accelerate in the spring.

Dealers’ outlook for 2017 appears to be better than the OEMs. Deere, CNH Industrial and AGCO are all calling for North American ag equipment sales to be down 5-10%. 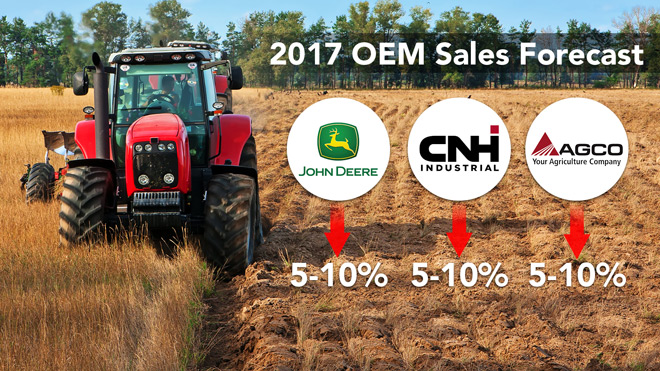 Raven Industries, a manufacturer of precision farming technology, reported its fourth quarter results on March 28. Net sales for the quarter ending Jan. 31, were $68.9 million, an increase of 30.5% vs. the fourth quarter of fiscal year 2016. 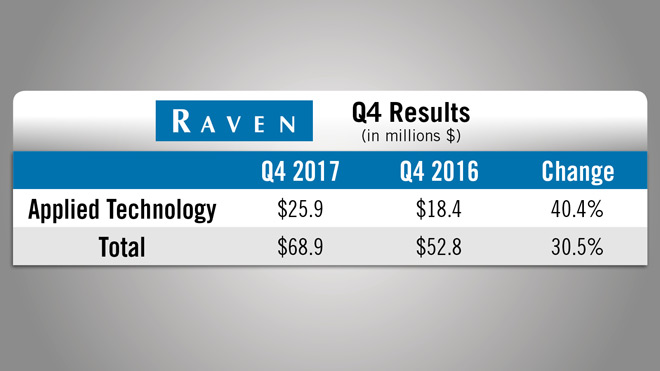 Geographically, domestic sales were up 44% year-over-year and international sales were up 29.8% year-over-year. Consistent with the third quarter of fiscal 2017, sales growth for the division was driven by new product sales, expanded OEM relationships and higher sales of direct injection systems.

Looking ahead to fiscal 2018, Raven Industries President and CEO Daniel Rykhus says, “For Applied Technology, the ag market is expected to remain subdued, but we’ll focus on capitalizing on our new products and strong customer relationships to drive additional market share gains. In addition, our direct injection system, which is industry-leading technology, is poised for growth this year.”

Sweden got into the tractor production game in 1913 when the first Munktells model hit farms. Gross weight of the tractor with full fuel and cooling water tanks was 7 tons, and it was carried on wheels nearly 6.5 feet in diameter. The semi-diesel engine was capable of burning a wide range of fuels. It had a rated power output of 30 horsepower, but the manufacturer also claimed a 40 horsepower max output for the same engine. At its maximum forward speed, the tractor went 2.75 miles per hour with three speed transmission in top gear.

Munktells built about 30 of the tractors between 1913 and 1915. Later, Munktells would merge with Volvo, and tractors built after 1950 were sold under the Volvo BM name. Volvo’s tractor operation was later combined with Valmet in Finland. Today, Volvo tractors are known by the brand name Valtra, which is owned by AGCO.