In today’s newscast, we taken a closer look at Titan Machinery’s restructuring plans, which includes the closing of 14 stores in the first half of the year, the growing precision customer gap, an update on how Kubota’s acquisition of Great Plains is helping each company and Deere’s 1st quarter earnings.

Last time we reported that Titan Machinery announced it would be closing 14 of its ag stores during the first 6 months of 2017. The stores affected by the most recent announcement are some of the company’s smaller locations. They include: 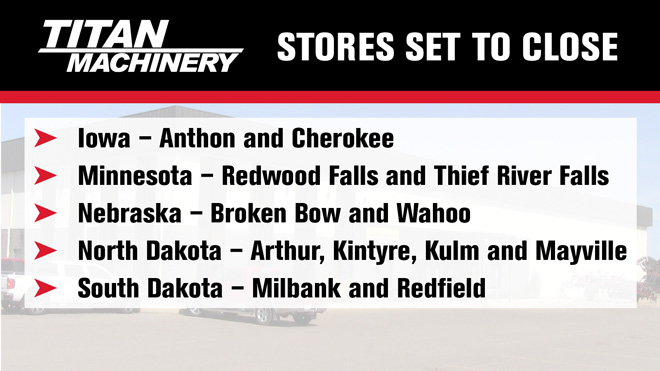 Many of these locations were within 20 miles of another Titan store.

What we didn’t touch on in the initial report was the Case IH and New Holland dealership is also completely restructuring operations at the remaining locations. Titan’s restructuring will move the organization away from its Strong Store Manager structure, where one individual was responsible for all operations at a location, to the Expert Team model.

Under this new structure, Area Managers for both Sales and Product Support partner together to manage 2-4 store locations and pull upon the combined resources and expertise of the area to serve customers. There are 17 of these areas which are divided into 4 regions (southwest, southeast, northwest, northeast). Local Parts and Service employees will report up through the Area Product Support Manager and the Equipment Sales Consultants will report up through the Area Sales Manager.

In an interview with Ag Equipment Intelligence, David Meyer, Titan’s chairman and CEO, said, “What we need are experts at our stores to serve customers that are getting fewer and larger. To have these experts, we need scale in the dealerships. We need highly trained technicians, as well as parts experts and a wide breadth of parts inventory. Our Expert Team model supports these efforts.

Meyer adds, “This is not a knee-jerk deal. This is something we’ve been thinking about for a long time; how to really optimize our footprint for long term success.

On Feb. 22, Titan announced a new partnership with Decisive Farming to deliver precision farming services to its ag customers. Jeff Bowmann, chief marketing officer for Titan, says this the partnership represents the ongoing transition to the Expert Team Model.

He says we’ll start to see Titan investing more in product support, precision ag, financial services, inventory optimization and other capabilities to serve customers better with area and regional resources beyond what could be achieved at independent stores. He adds that farmer productivity and profitability is Titan’s primary focus and the dealership is making changes accordingly.

This week’s dealer on the move is 4 Rivers Equipment. The John Deere dealer acquired Longs Peak Equipment in Longmont, Colo. This brings 4 Rivers total locations to 15 throughout Colorado, New Mexico, Texas and Wyoming.

At last week’s National Farm Machinery Show in Louisville, I had the opportunity to talk with suppliers about how and why precision farming dealer networks are evolving in the industry.

From the major equipment manufacturers to the ag technology specific companies, nearly every one acknowledged the ongoing transition in the roles and responsibilities of precision specialists as frontline faces for sales and service within a dealership.

But one of the challenges to this evolution is keeping some farm customers from falling too far behind the adoption curve. Gregg Sauder, founder of 360 Yield Center, noted a troubling trend he is seeing in the ag industry with a growing divide between those farmers who have embraced ag technology from the start and those who have yet to integrate it into their operation.

“My concern is this. I’m seeing a separation. The really aggressive, early adapters of technology — they are moving quite a ways ahead of let’s say our average grower. My quest and the challenge for our team is, how do we make sure this deviation difference (doesn’t increase) and (to grow) profitability, how we bring that average grower, that’s maybe not even looking for technology — how do we bring him up into that realm? We cannot let this separation get any wider. And so I see it. I struggle with it from that aspect. I want everyone to be profitable. I want every farm family to have a great year. So that’s the quest we’re on.”

Sauder added that proving return on investment with technology is at the core of closing the precision gap and creating a more competitive landscape for those farmers who today, may be struggling with finding more profitable methods to increase productivity.

We’re now about 7 months into Kubota’s acquisition of Great Plains. We had the chance to check in with top executives from both sides of the deal to see how it’s going while we were at the National Farm Machinery Show in Louisville earlier this month.

Todd Stucke, Kubota vice president of marketing, product support and strategic benefits, says the acquisition helps widen the product offering. Currently, Kubota has 1,100 dealers in the U.S. He says the tractor manufacturer is focused on becoming an implement company and making sure all of its tractors have implements that fit with them. The acquisition of Great Plains and Land Pride has been critical to achieving that goal.

From Great Plains standpoint, the acquisition has gone about as smoothly as one can imagine. Linda Salem, president of Great Plains, and Mike Cleveland, vice president of sales, say it’s business as usual in Salina, Kan.

Salem says one of the benefits of the acquisition has been implementing Kaizen improvements at the plants, something Kubota puts a lot of focus on she says. This is helping Great Plains get more product to its customers faster.

She adds, while being acquired by a large corporation like Kubota could create some tension, that hasn’t been the case and every Great Plains employee still has a job.

Cleveland says another benefit has come from the ability to collaborate with Kvernland on technology developments without duplicating efforts. Kvernland was acquired by Kubota in 2012. 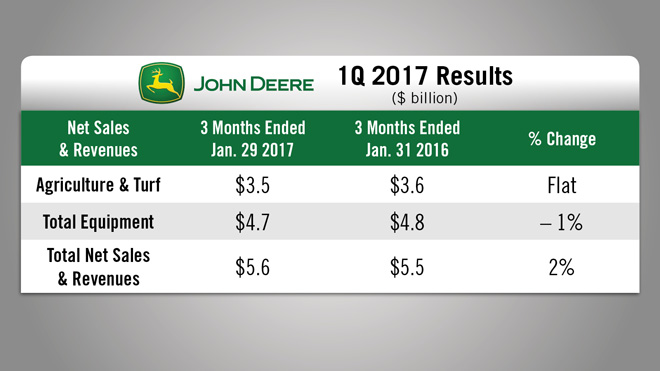 John Deere recently announced its first quarter earnings of $194 million. Net sales worldwide for the first quarter rose 2% to $5.6 billion. Deere faced a 1% decline for the quarter in equipment net sales. For fiscal year 2017 Deere expects a 4% increase in net sales and revenues of $1.5 billion.

According to Mig Dobre, a senior research analyst at Baird, Deere’s combine early order program, which typically accounts for about 90% of sales, ended during the first quarter and increased single digits over last year.

Samuel Allen, chairman and chief executive officer of Deere, says the company started the year off on a positive note in the face of soft market conditions and even though earnings were lower than last year, all of its businesses were profitable. 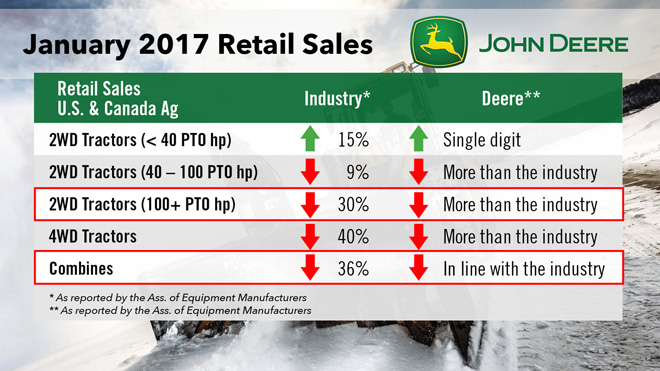 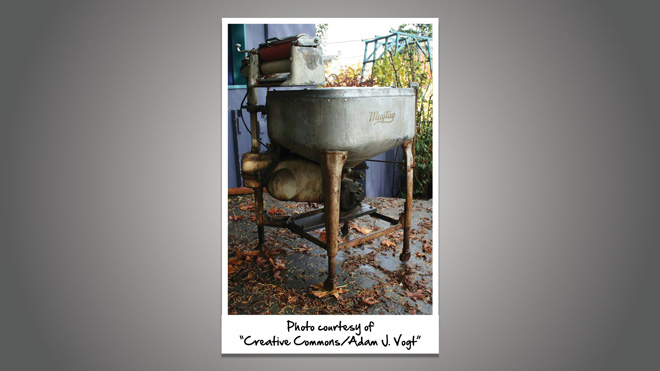 While most people associate Maytag with washers and dryers, the company got its start as a farm implement and vehicle manufacturer.

In 1893, Frederick Louis Maytag and three partners started the Parsons Band Cutter & Self-Feeder Co. By 1902, they were the world’s largest self-feeder manufacturer. They also made a short-lived tractor and a corn husker/shredder.

The much-proclaimed Maytag attitude about quality stems from the corn husker, ironically named Success. It was of such poor quality, it required Maytag to make numerous trips to farmers’ fields for repairs. Due to this, he resolved that his future products would always be dependable.