In today’s newscast, we discuss why members of the Far West Equipment Dealers Assn. voted against merging with the Western Equipment Dealers Assn., what dealers should be looking for in the next generation of precision farming specialists, the highest reading of producer sentiment since October 2015 on Purdue University’s Ag Economy Barometer and how exports of U.S. made ag equipment fared through the first 9 months of the year.

I’m managing editor Kim Schmidt, welcome to our final episode of On the Record for the year! Here’s a look at what’s currently impacting the ag equipment industry. 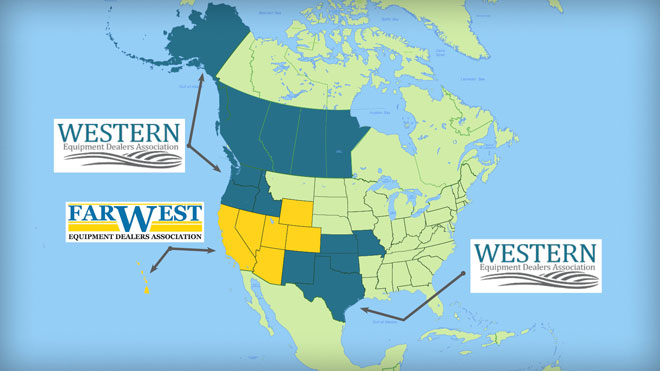 In March, the joint boards of directors for FWEDA and WEDA voted to move ahead with the proposed merger. The merger would have filled some regional gaps in WEDA’s demographics.

We spoke with FWEDA Chairman Craig Kleindl, director of pricing at RDO, to learn more about the vote. He says dealer members felt the decision was rushed and some of their concerns weren’t addressed.

Kleindl says mergers among the dealer associations are somewhat inevitable and there is still a possibility for FWEDA to merge with another association in the future.

WEDA was formed by the merger of the SouthWestern and the Canada West Equipment Dealers Associations in 2014. Back in September, the members of the Pacific Northwest Hardware & Implement Assn. voted to merge with WEDA, further extending the associations reach.

This week’s dealers on the move are Bobcat of Dallas-McKinney, GreenMark Equipment and Intermountain New Holland.

Bobcat of Dallas-McKinney, which also carries Husqvarna equipment, has added a fifth location in Melissa, Texas.

John Deere dealer GreenMark Equipment celebrated the completion of its fully renovated Winamac, Ind., location with an open house on Dec. 10. The dealership has 16 locations.

Intermountain New Holland has entered into a definitive agreement to acquire the assets of Twin Falls Tractor & Implement and its sister store Northside Implement in Jerome, Idaho. With the acquisition Intermountain will grow from one location to three.

The Need for a New Breed of Specialists

Finding the next generation of precision farming specialist is a challenge that more than 85% of dealers reported being a priority to grow their precision business in the Precision Farming Dealer 2016 Benchmark Study.

But first, dealers must identify the traits they’re looking for in potential candidates for these fast-paced, rapidly evolving positions. They then face the challenge of recruiting and retaining specialists.

The dearth of talented tech-savvy employees is often a topic of conversation with dealers, and they are being tested to find employees with diverse, yet developed skillsets.

At the 2016 Precision Farming Dealer Summit, Ohio State University associate ag professor John Fulton said the most successful dealerships today are finding a mix of experience and ambition in their new precision hires.

“I think what you’re really looking for is kind of a new breed of student. A student that has potentially some business background, they might be doing sales, they might be technology sales to trying to sell services of some sort. So having a business background and how that may look, how they can engage potential clients, current clients, is something that you want. But in a lot of cases you're going to have to have a little bit agronomy background. So as that technology engages crops, soil, or whatever, at least have a little bit of lingo and understanding to talk to technology from an agronomy or fertility planning perspective.”

Fulton added that precision internships are mutually beneficial partnerships that dealerships can develop with universities, as a way to test and train prospective hires.

The November reading of Purdue University’s Ag Economy Barometer brought some much needed positive news to close out the year. Ag producer sentiment in November reached its highest level since October 2015, and at 116 was well above October’s reading of 92. 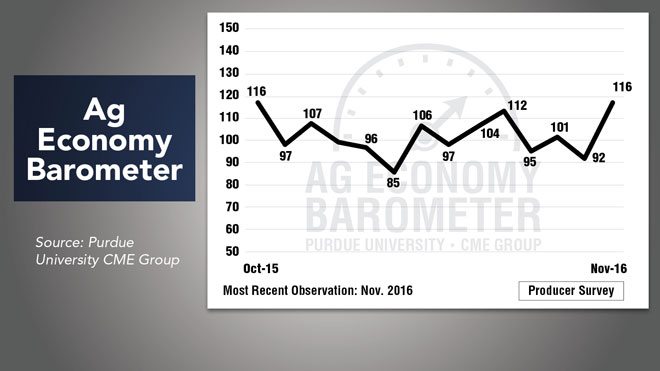 The authors of the report say the improvement came largely from reduced pessimism about the future due in part to improving corn and soybean prices. 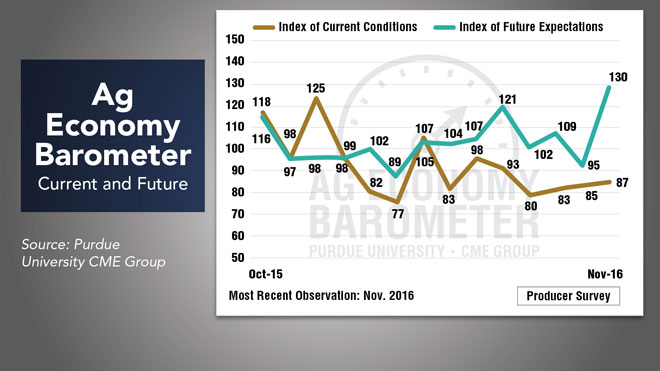 The Ag Economy Barometer consists of two components, the Index of Future Expectations and the Index of Current Conditions. Producers’ outlook on current conditions has been slowly improving since September after bottoming out in August.

In the latest reading, the Index of Future Expectations increased to 130 vs. 95 in October. The large jump was partly due to a significant rally in futures prices for corn and soybeans this fall, which included prices for the 2017 and 2018 harvest.

The price rally occurred despite record-large harvests of both corn and soybeans this fall, which had been expected to put downward pressure on futures prices.
According to the report, “the impact of the price rally was magnified for many corn and soybean producers by their harvest of record yields in 2016. The combination of strengthening commodity prices and record yields is improving the crop revenue picture for producers, providing support not only to their perspective on near-term economic conditions, but also fueling a change in perspective about the future.”

If producer sentiment remains strong, it could translate into an improvement in equipment sales for dealers and manufacturers. 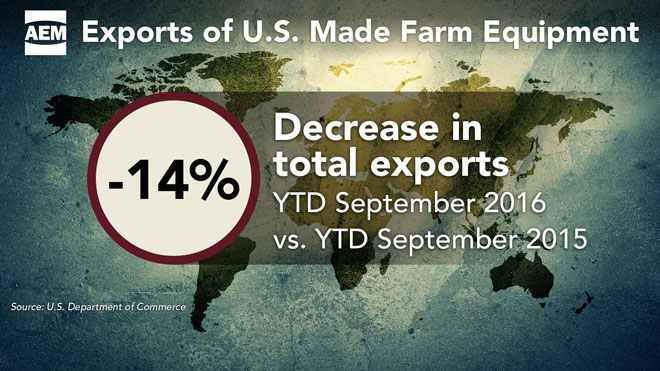 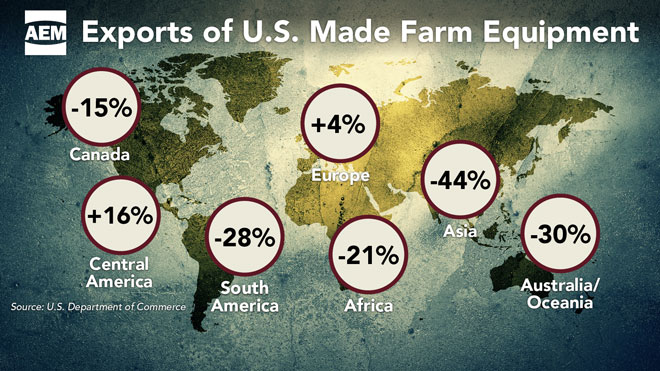 Exports of U.S.-made ag equipment were down 14% through the first three quarters of 2016 compared to 2015. A total of $5.1 billion worth of equipment had been shipped to global markets through the end of September, according to the Assn. of Equipment Manufacturers.

Europe and Central America were the only two regions to see increases in U.S. equipment exports for the first 9 months of the year. The largest decline was in exports to Asia, which were down 44% for a total of $440 million. While exports to Canada were down 15%, the country still is the top country for exports of U.S. ag equipment accounting for $1.5 billion worth of goods.

“Our expectations for the fourth quarter remain subdued as the U.S. dollar is experiencing its longest rally in 16 years. With the global economic malaise, the slowdown in emerging markets and the negative interest rates seen in several economies’ bond markets, investment is flowing to the U.S. and U.S. stocks, driving up demand for our dollar, inadvertently affecting our competitiveness abroad.”

Now from the Implement & Tractor Archive…

In 1967, Bobcat’s advertising manager Fred Froeschle (pronounced Freshly) and filmmaker Bill Snyder produced a marketing film that combined the company’s equipment and the popularity of go-go dancing. The short film, “Bobcat A-Go-Go,” was used at trade shows and dealer meetings. According to Dale Webb, retired regional sales manager for Bobcat, people would line up at tradeshows and ask to see the film again.

As always we welcome your feedback. You can send comments and story suggestions to kschmidt@lessitermedia.com. On behalf of the entire team here at On the Record, may you and your family have a Merry Christmas and a Happy New Year. Thanks for watching, I’ll see you next time.

Are Electric Ag Vehicles Far Off?