What Caught Your Attention in 2016?

Read these summaries of the ‘most-viewed’ content via Farm Equipment’s Digital Media offering — over the first 8 months of the year.

As editors, it’s our job to know, and deliver on, the news, topics and ideas that are most relevant to the farm equipment industry. Unlike years past, the prevalence of analytics in today’s world allows us to take a first-hand look at the information-consumption habits of our audience.

The Digital Media Dept. at Lessiter Media conducted an “audit” of Farm Equipment’s first 8 months of 2016 to show what is getting the lion’s share of attention on the industry’s laptops, tablets and mobile devices. The list below is a “journal,” so to speak, of some of the most talked about content of the past 8 months. The Farm Equipment staff monitors these analytics to keep a pulse on readers’ concerns, and go to work asking questions and interviewing to provide actionable content to address those issues.

To see the original piece (and ensuing industry commentary), you can type the article headline into the Search position at the upper right hand of the home page at www.Farm-Equipment.com. 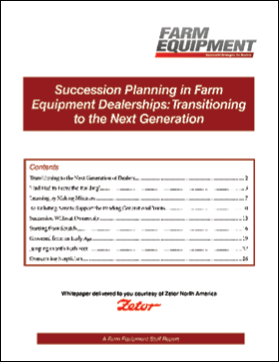 Most Downloaded E-Book/Whitepaper: Succession Planning in Farm Equipment Dealerships, Transitioning to the Next Generation

With Farm Equipment’s new website platform came the introduction of FREE e-books and whitepapers. The most downloaded one of 2016 was “Succession Planning in Farm Equipment Dealerships, Transitioning to the Next Generation,” which was sponsored by Zetor North America and outperformed all other downloadable e-books by a 2:1 margin. This presentation was based on the succession planning stories of 8 operations and also earned the Farm Equipment editorial team a first-place award among national business publications. These interviews also led to Farm Equipment’s Dealership Minds Summit that was devoted solely to this subject.

The most viewed special report from the editors of Farm Equipment was “Thinking ‘Small’ Pays When It Comes to Moving Used Inventory,” which was posted online in January 2016. This in-depth report unearthed the actions taken by the three dealers representing the “small side” of Farm Equipment’s Dealership of the Year Alumni Group. With smaller dealers generally in better shape on used inventories than the multi-store operations, Dave Kanicki, Mike Lessiter and Mike Wiles shared ideas of the smaller dealers (Johnson Tractor, Janson Equipment and Kennedy Implement) who by necessity had to react quicker to decline in sales. 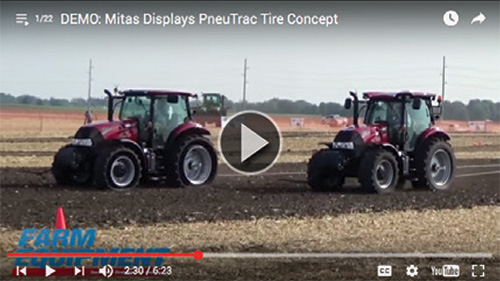 Easily the most viewed single video of 2016 was one that was actually posted in September 2015, following a field demonstration at the Farm Progress Show in Decatur, Ill. Farm Equipment captured the field demonstration of the Mitas PneuTrac concept, which was designed to bring together the best of both words in traditional pneumatic tires and rubber tracks. Thanks to the being there first and the “gone viral” byproduct that can follow, this video has nearly twice the views of any other video on the video archive at www.Farm-Equipment.com. 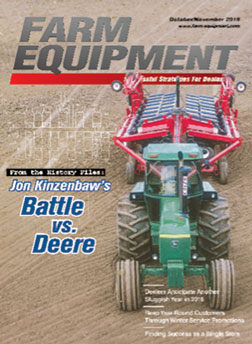 Most Viewed Print Article: The Rear-Fold Planter and the Battle That Ensued

While it was first printed (and posted online) in October of 2015, the first-person account of Kinze founder Jon Kinzenbaw’s legal fight against John Deere was the most viewed feature article of the first 8 months of 2016. Farm Equipment obtained permission to publish a chapter from his 2015 book release Fifty Years of Disruptive Innovation in its entirety and in Kinzenbaw’s own words, detailing a “make or break” moment in his fledgling company’s history. 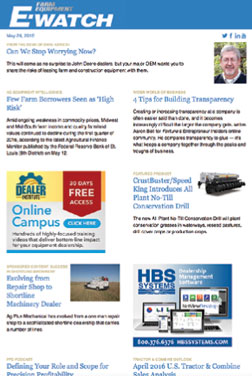 Most Read Staff-Written Blog/Column: Can We Stop Worrying Now?

This piece by Dave Kanicki on May 24, 2016 addressed news of John Deere significantly stepping up its leasing activity and its steps to get dealers to share in the risk of residual values. The piece included commentary of the situation from analysts at Baird and Avondale Partners. In asking dealers to weigh in on the growing impact of leases and their impact on used equipment pricing and inventories, the article also generated several direct responses via the commentary feature of the site. 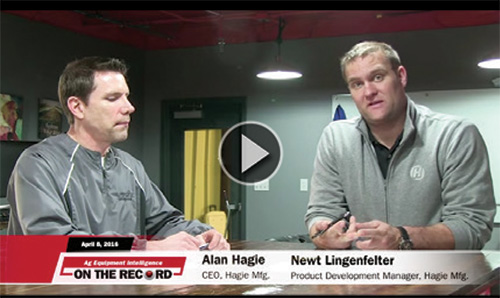 The April 8, 2016 broadcast was the most watched “On the Record” (the twice-a-month broadcast news program from Ag Equipment Intelligence). The lead story of the broadcast (sponsored by DLL Financial) covered the news of the joint venture, which marks the end of Hagie’s factory-direct distribution model. Host Kim Schmidt detailed what the joint-venture would mean for distribution and sales/service, first with an interview with newly appointed President Kent Klemme, and then a video with Product Development Manager Newt Lingenfelter. Other top-viewed broadcasts of the first 8 months of 2016 included: “Kubota is One Step Closer to Being a Full Liner” (May 20, 2016), “Will 2016 Be the Trough for Deere?” (February 19, 2016) and “Titan ‘Rips the Band-Aid Off’ with Inventory Reduction” (March 25, 2016).

Here is a list of the top 10 most viewed pieces of news shared by Farm Equipment staff in the first 8 months of 2016.

One month after the release of its 2016 Big Dealer Report, Ag Equipment Intelligence (AEI) recapped the flurry of M&A activity taking place among equipment manufacturers, and, in particular, the shortline companies. The article from the paid subscription AEI was shared to a wider audience via Farm Equipment E-WATCH. The piece examined a just-completed report by Eric Bosveld, Bosveld & Assoc., and focused on recent deals and their attraction for the acquirer, and the increased presence of private equity money entering the ag equipment markets.

Most Viewed Webinar: Drivers of the Business: Financial Metrics for the Non-CPA 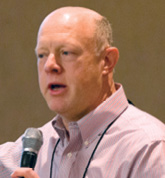 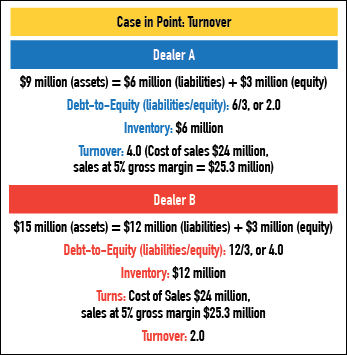 The most watched webinar of 2016 was delivered on April 26, 2016 and was delivered by Mike Hedge, president of Birkey’s Farm Stores (Dealership of the Year Alumni Group). Hedge shared the key financial metrics used at Birkey’s and what departmental managers must know about what they measure and how they fit together to achieve success in a farm equipment dealership. In addition to those who attended the live webinar sponsored by CDK Global, this webinar also continues to be one of most sought after from the webinar archives.

In 2016, Farm Equipment began sharing on a monthly basis the Glass Management Group’s annual outlook for tractor and combine unit sales, along with field inventory and retail sales, and updated with actual results as provided by the Assn. of Equipment Manufacturers (AEM). The inaugural piece by Charlie Glass, distributed on Jan. 22, 2016 was the most viewed regular blog contribution of the year.

In the all-new special “Success in Shortline Machinery” series that appeared online in the first 6 months of 2016, the Feb. 15, 2016 story on “What Consultants Say About Shortline-Only Farm Equipment Dealerships” generated the most views. The piece covered interviews with three management consultants (George Russell, George Keen and John Schmeiser) who shared their take on the challenges shortline-only dealers face. Other content ranking high in views for the series were “Creating a Full Line Offering Through Shortline Machinery,” (Jan. 11, 2016), “Traditional Dealerships Setting Up Separate Entities to Sell Shortline Equipment,” (March 21, 2016) and “RDO Equipment’s Structure for Shortlines” (Jan. 18, 2016). In total, viewers’ average page time with this content (sponsored by Versatile) was nearly 4 minutes.

With consolidation and M&A continuing strong, Farm Equipment introduced a new online content section last April to make it easier for the industry to monitor these events in real time. With the introduction of Dealers on the Move, Farm Equipment curates news of dealer mergers, acquisitions and other news so the industry can easily access this information in one convenient place online. This special section is accessible both on the home page (under Farm Equipment Resources) and under the “Topics” button at upper left.

What’s Keeping Your Customers Up at Night?