International agribusiness show mixes technology, machinery innovations with theme of ‘Being a Farmer in 10 Years.’

With more than 1,700 companies from 42 different countries, the 2017 SIMA International Agribusiness Show offered a global look at current — and future — farm equipment trends.

The 5-day event, held every other year in Paris, France, drew a diverse crowd of farmers, retailers, distributors and researchers. With a theme of “Being a Farmer in 10 Years” the show emphasized methods and machinery designed to improve long-term sustainability.

Among the highlights was an Innovation First gallery featuring conceptual advancements in four core areas of agriculture — digital technology, robotics, ecological economics and genomics. Complementing the research projects was a start-up village with 15 different young companies launching an array of progressive platforms — from mobile weeding robots to a farm machinery rental website that lets farmers buy and sell equipment.

Another highlight of the show — and a new addition in 2017 — was a “Dealer Day-ting” session where representatives from 8 regions — U.S., UK, China, Germany, Finland, Italy, Denmark and France — discussed different farm equipment distribution models, market challenges and an outlook on the evolution of dealer networks in the future.

While the global tone was positive, speakers did note the pressures of industry consolidation and the creation of “super dealers” in some countries. They also spoke about the aging population of both dealership owners and farm customers, the influence of “an Amazon mentality” for online parts and wholegoods sales and the need to better integrate data management and agronomic services into retail offerings.

Below are some of the highlights of the 2017 SIMA Show. 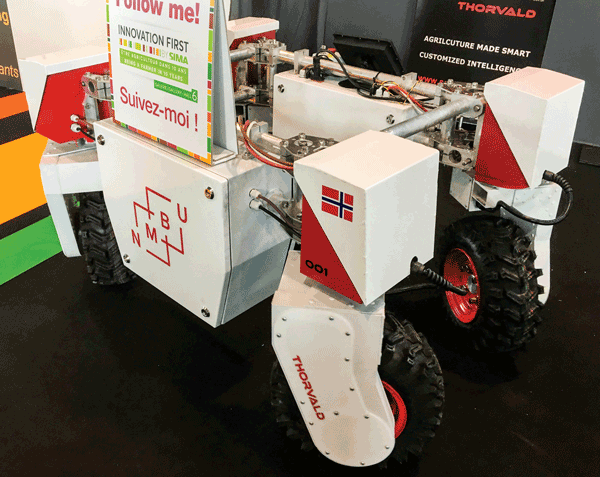 Several companies showcased robotic, autonomous technology, including Saga Robotics and the Norwegian University of Life Sciences, which introduced Thorvald, a modular ag robot. The vehicle weighs about 440 pounds and has 8 motors — 4 for steering and 4 for propulsion. It is adaptable for tillage work and has been primarily tested for use in strawberry tunnels using UV lights to kill mildew on plants. “One of the unique features is that it can be modified for a lot of different working environments, kind of like Legos, and can be narrowed to fit into smaller spaces or expanded for more substantial field tasks,” says Lars Grimstad. 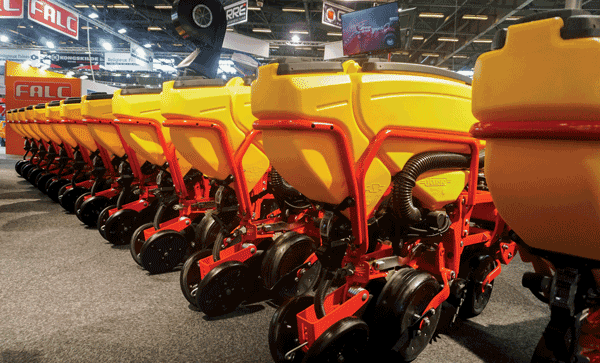 Väderstad debuted its Tempo L precision planter, available in 12 or 16 rows and capable of planting speeds of up to 12 mph. The planter has a 1,300 gallon granulated fertilizer tank and row units feature versatile 26.4 gallon (100 liter) tanks for seeding a variety of crops including corn, cotton or sugarbeets. The system can be controlled by a tablet in the tractor cab, run through the company’s E-Services control center. The system allows for wireless control of seeding population, depth control and down pressure. “Also new on this model is the hydraulic weight transfer that can add and take off pressure,” says Philip Westman, who added that the planter would be introduced to the Canadian market in spring 2017. 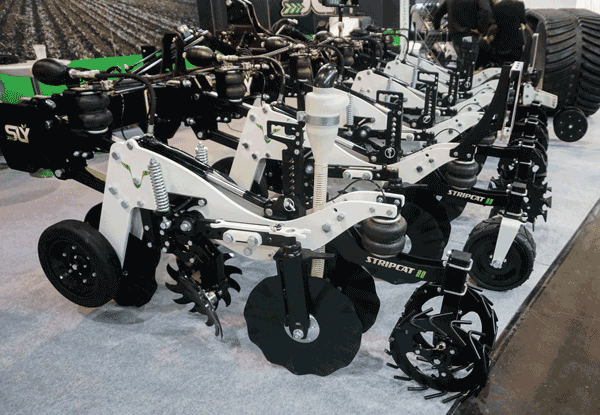 Sly showcased the StripCat II strip-till rig, available in 4- to 16-row models and in 16- to 30-inch row spacings. The row units feature a disc opener between two gauge wheels, two Sunco sabertooth trash wheels, shank setup for placement of liquid or dry fertilizer, a berm-builder and three different models of rear packing wheels. The system runs on parallel linkage with adjustable down pressure from the tractor cab. “It can be used for fall or spring applications as well as for seeding cover crop on either side of the strip,” says Cyrille Geneste.

Laforge introduced its EZ Ballast product, allowing operators to add about 3,400 pounds of tractor weight in seconds without having to get out of the cab. Compatible with John Deere 7R series tractors, the unique system attaches to the bottom of the machine with the push of a button and does not reduce ground clearance. “It’s a lot easier than adding wheel weights and we see more farmers in North America interested in accurately ballasting tractors if they are moving from a haying or mowing to a tillage operation where they need to add some weight,” says Lars Paulson. 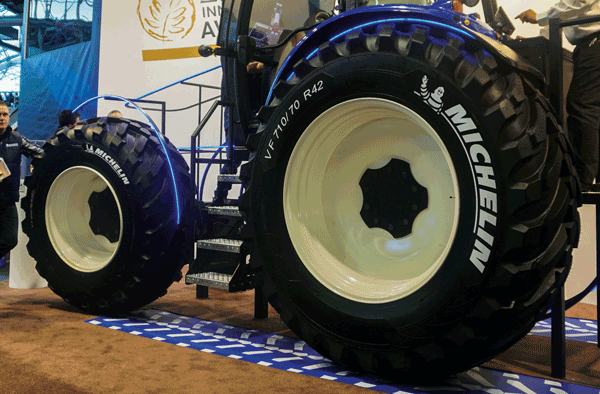 Receiving one of SIMA’s Gold Medals for innovation, Michelin launched its EvoBib 2-in-1 tire, which adjusts pressure for road and field conditions with a unique tread pattern. At psi of 17 or less in the field, tread contact increases to reduce soil compaction, while increasing traction. At higher tire pressures of 29 psi or more, only the central band of the tire contacts the road, reducing vibration. “It’s a totally new concept which can save more than 500 gallons of fuel per year and increase field traction by 30%, which can save 20 horsepower,” says Emanuel Ladent, who added that the tire is expected to be launched commercially by the end of 2017. 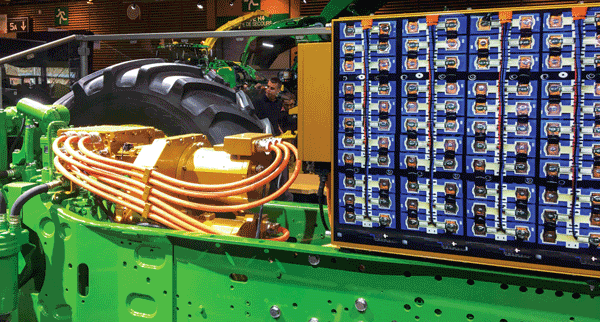 A recipient of SIMA’s Special Mention honor, John Deere unveiled its electric tractor concept. The Sustainable Energy Supply for Agricultural Machinery, or SESAM model, is the ag industry’s first fully battery-powered tractor. The tractor frame is based on the manufacturer’s 6R series. The battery pack retains a charge for 4 hours, is designed to last for 3,100 charging cycles and has a maximum output of 400 horsepower. According to Deere representatives at the SIMA show, the prototype tractor is at least 4-5 years away from commercial production. 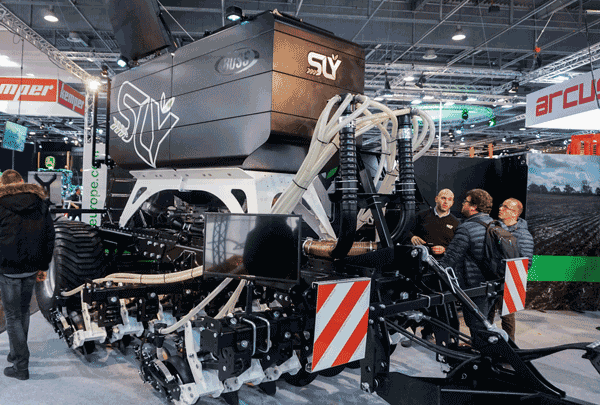 Sly unveiled its new Undercut Disc no-till drill designed for seeding wheat and cover crops. Developed in conjunction with Australian manufacturer, Boss Agriculture, the machine is developed in Europe for 9- to 40-foot widths and 120 foot widths in the U.S., and can seed at speeds of 6-8 mph. A unique feature is the undercut disc, or double-angled disc, that reduces down pressure requirements and risk of seed furrow compaction. The unit also includes a gauge wheel in the back and a mounted side wheel that keeps soil in the furrow. “The floating gauge wheel is designed to gently hold the soil in place, and connected to a sensor so the hydraulic down pressure monitors and controls furrow compaction and depth,” says Cyrille Geneste. 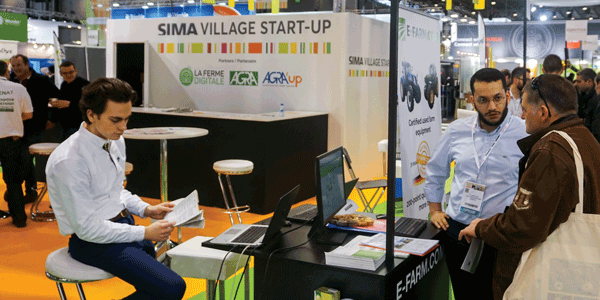 Offering a venue for emerging companies to showcase progressive ag innovations, the SIMA Start-Up Village featured 15 companies, exhibiting a variety of next-generation products and platforms in four categories — on-board electronics/new technology, service and advice, social platforms and sustainable development. Companies included Carbon Bee with a tool to assess plant health, enabling treatments to be optimized and diseases to be tracked by capturing data using a drone, a robot or a tractor. Another was Diimotion, which developed a direct injection system for more efficient and eco-friendly spraying, capable of working with all products, both powders and liquids, with a reaction time of barely 1 second.

Ag Leader Technology displayed its SureDrive electric drive system on a MaterMacc planter row unit. The system acts as a clutch for individual row section control and varies seeding population across the entire planter. Automatically adjusting meter speed on each row, the system maintains population consistency around turns, contours and terraces. It’s a colorblind system, meaning it can be fitted to a variety of planter brands and seed meters, says Jeff Bentley. 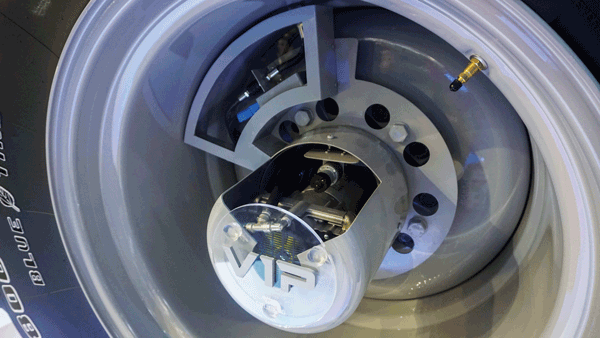 One of two SIMA Gold Medal recipients, Trelleborg launched its VIP (variable inflation pressure) tire system, capable of automatically increasing and reducing pressure based on load weight. The system, initially tested in Fendt combines, features a compressor and enclosed sensing control unit in the axle that adjusts tire inflation to reduce compaction by about 10% and increase crop yield by about 5%, according to Lorenzo Ciferri. The system is still in the prototype stage and being field-tested on wheat, Ciferri says.