By Charlie Glass posted on October 12, 2022 | Posted in Analysis & Commentary

Under 40 Horsepower Tractors – Continue to show weaker than normal retail sales as inflation pressures continue to be the main driver in this class. 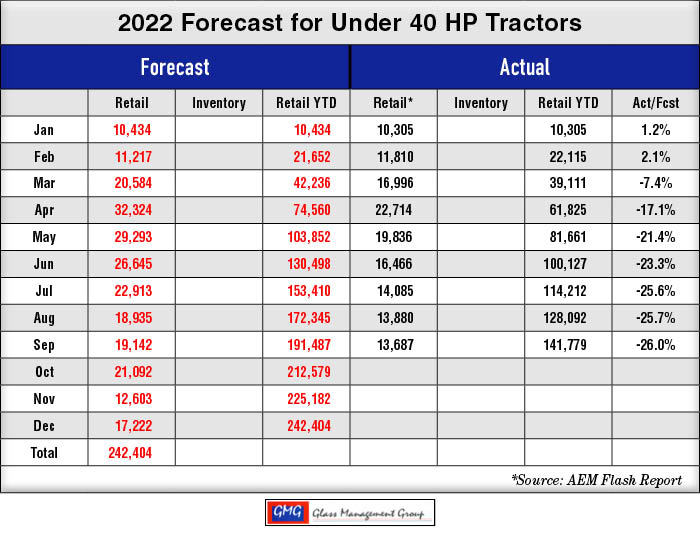 40-99 Horsepower Tractors – The 40HP to 60HP segment of this class has been the primary growth strength and that is indicative of lifestyle farmers’ purchasing power.  As this segment slowed, the entire class has demonstrated slow sales this year. 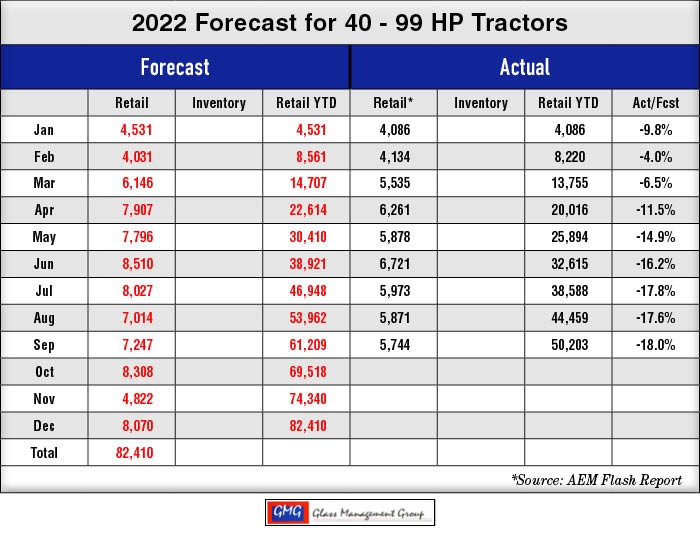 100+ Horsepower Tractors – This class of tractors are purchased primarily by production producers and the necessity to replace older units has been one driver while many of these units were on lease contracts that had a finite end date. 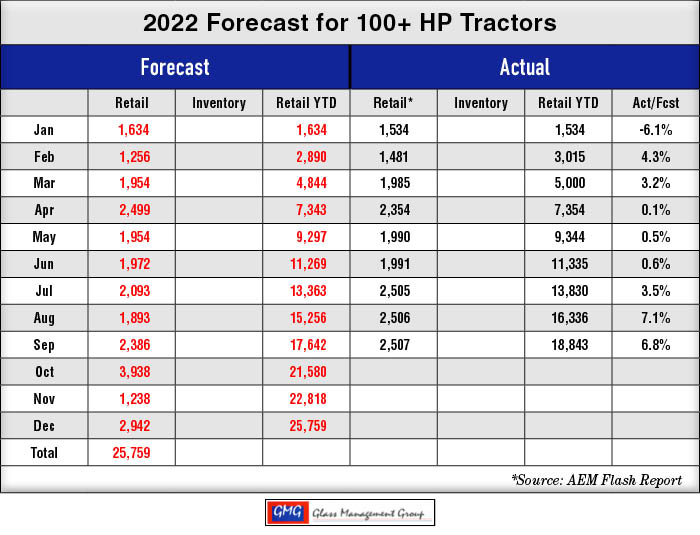 4WD Tractors – These largest tractors had shown some strength early in the year but retail sales have remained somewhat stagnant in recent months. 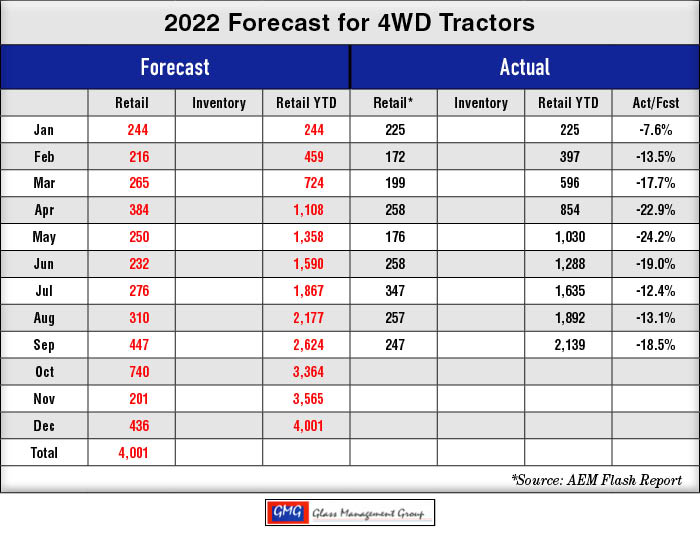 Combines – Many of these units have been purchased on lease contracts in prior years and some of those contracts are coming to a close requiring a new purchase.  Strong commodity prices for grains have also been a strong driver for combine sales. 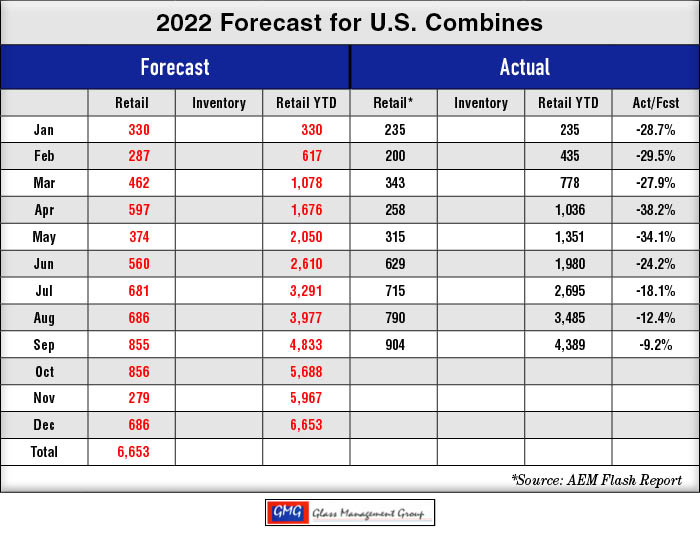 U.S. corn producers are witnessing a rise in commodity prices as the world grain supply tightens.  Shortly after the start of the Russian/Ukraine war India placed a ban on the exporting of sugar and wheat.  Ukraine had been a large supplier of wheat to the export markets in Europe and the war had effectively stopped this year’s crop.

The last time the world experienced such a problem was in 2008 after the financial crisis and many countries banned export of agricultural products in order to help reduce the cost of those products in their own countries.  In this case, the impact was not felt until 2010 but in that year there were riots in many countries due to the lack of food supplies.

In a typical year the U.S. will export approximately 35% of our grain crops.  The U.S.  Department of Agriculture (USDA) forecasted grain exports in August, 2022 to be $196 billion, up $5 billion from the May, 2022 projection.  Their forecast for 2023 indicated a reduction in export activity and an increase in importing of agricultural products, particularly animal feed stocks.

Previous growth projections are moderated due to ongoing trade disruptions, above-target inflation rates, and rising energy prices.  These factors will also reduce the Net Farm Income for 2023 and will directly affect the sales of tractors and combines next year.

The impact of Hurricane Ian striking Florida and then traveling up the east coast to South Carolina will have an immediate effect upon equipment sales in those states as producers begin to assess the damage to equipment and generate settlements with their insurance companies.

On Oct. 4, The Ledger in Lakeland, FL, quotes Christa Court, economist and director of the Economic Impact Analysis Program for the University of Florida Institute of Food and Agricultural Sciences (UF/IFAS): “It so happens, that Hurricane Ian’s arrival coincides with the usual timeframe for plantings of most crops in the region. The crops in harvest now include avocado, oranges, grapefruit, carambola, corn, peanuts, and sweet potatoes.”

A September 30th press release from Alico, Inc., Fort Myers, Florida, which owns 48,900 acres of citrus groves in central Florida, indicated that all of their groves were flooded and there was “substantial loss of fruit” due to the high winds.  An orange tree will carry two seasons of fruit in its branches since the time required to fully mature an orange is 24 months.

A large family dairy farm, Dakin Dairy Farms, Manatee County, Florida, maintained a herd of 2,250 cows and the storm resulted in the loss of 250 head of those dairy cows, along with substantial damage to their structures on the farm.

All of these events are localized within the areas affected by Hurricane Ian but there is one industry that was substantially impacted that will have an impact across the U.S. and that is the phosphate industry located in central Florida.  The Mosaic Company is the U.S.’s largest producer of potash and phosphate fertilizers.  Their mines are located in central Florida and many of those mines sustained substantial damage from Ian.

“Early assessments indicate phosphate production could be down by approximately 200,000-250,000 tonnes, split roughly evenly between the third and fourth quarters of 2022. Repairs are expected to be completed over the next 1-2 weeks.

In addition to production impacts, the timing of shipments was also affected by the storm. Phosphates sales volumes in the third quarter are now expected to total 1.60-1.65 million tonnes, as port and rail closures delayed late third quarter shipments to October. Mosaic plans to provide further updates when it reports third quarter results.”  (Source: The Mosaic Company, news release 10/3/2022).

Since Mosaic supplied approximately 50% of U.S. phosphate fertilizer sales, this will affect U.S. grain farmers in 2023 in the form of limited supplies and higher prices.

The Purdue/CME Group Ag Economy Barometer reported that of the 400 farmers surveyed this month the number of farmers planning to purchase new equipment fell by 2% from the August level.  When questioned, these farmers indicated that rising cost of new equipment and rapidly increasing interest costs were primary factors in their buying decision.

The USDA reported that grain stock, particularly corn and soybeans, were higher in September than year ago levels.  This resulted from a larger total crop produced in 2021/22 marketing year and in export demand for those products.

Corn prices were slightly elevated above the August, 2022 levels causing corn stock, both on the farm and at commercial elevators, to decline slightly while soybean stock level declined at a much slower rate as those commodity prices slipped in September.

Barge traffic on the lower reaches of the Mississippi River has slowed grain shipment in recent days.  The U.S. Coast Guard reported that the draft levels in many stretches of the river have reached 9.5’ and many fully loaded barges will require at least 11’ of draft.  This has resulted in the current traffic to be “short loaded”, or carrying a reduced amount of grain with each trip.

Continued inflation pressure within the U.S. general economy and the agricultural economy has driven sales of tractors and combines to lower levels this month.  The cost of farm inputs for the 2022/23 marketing year appeared to be rising and many grain producers, the largest purchasers of production tractors and combines, are anticipating a decline in net farm income for next year.  U.S. agricultural producers have shown to be very conservative business people of the past decade and that is being manifested in their plans for future equipment purchases.

The demand for smaller tractors and equipment by lifestyle farmers has declined in recent months and as the economy reels from the growing inflation this demand will most likely continue to decline in the coming months.

Our models continue to suggest a weakening year for 2023 as many of the drivers for agricultural equipment sales move to the down side.