Floorplan and other interest expense of $1.5 million in the first quarter of fiscal 2023 was flat as compared to the same period last year.

In the first quarter of fiscal 2023, net income was $17.5 million compared to net income of $10.5 million in the same quarter last year.

Agriculture revenue for the first quarter of fiscal 2023 was $318.5 million, compared to $229.6 million in the first quarter last year. "At the segment level, our agriculture segment benefited from robust demand which was supported by an increase in equipment deliveries from our suppliers following a delay in fiscal fourth quarter 2022," said Meyer in the company's earnings call.

"Demand for new and used equipment is the highest we’ve seen in decades, supported by ongoing momentum in commodity prices which remain at high levels through our first quarter," said Bryan Knutson, CFO at Titan. "While it’s been a late and wet spring, there has been good planting progress in our markets in Iowa, Nebraska, southern Minnesota and southern South Dakota. Recent rainfalls have been very welcome in the drier western Dakotas and Nebraska territories and we expect planting to get into full swing as fields finally dry out in our North Dakota and northern Minnesota footprint.

"With the equipment supply challenges, we continue to focus on presales and procuring new equipment from our OEMs. Our parts and service customer support businesses continue to be a strong contributor to our bottom line."

It was noted during the earnings call that Titan's absorption rate in its ag equipment segment has been growing since 2018 from under 70% to about 90% today.

In updating its modeling assumptions for the year, Titan lowered its forecast losses in its international segment from –8-13% in its previous earnings call to –0-5%, saying the updated projection "includes a reduction in revenue of approximately 50% (vs. 75% previously) from our Ukraine subsidiary compared to fiscal 2022."

"With regards to our business in Ukraine, we have opened or partially opened all of our stores to support our customers for their equipment, parts and service needs during spring planting. According to Ukrainian sources, 77% of the arable acres in markets in which Titan has locations have been seeded compared to 72% for Ukraine as a whole. This speaks to Titan’s footprint in the central and western part of the country and demonstrates the resiliency of producers in those regions which have largely kept pace with seasonal farming activities," said Knutson.

"Although the conflict in Ukraine is extremely disruptive to our Ukrainian business, the impact has been less severe than projected in March as reflected in our updated modeling assumptions." 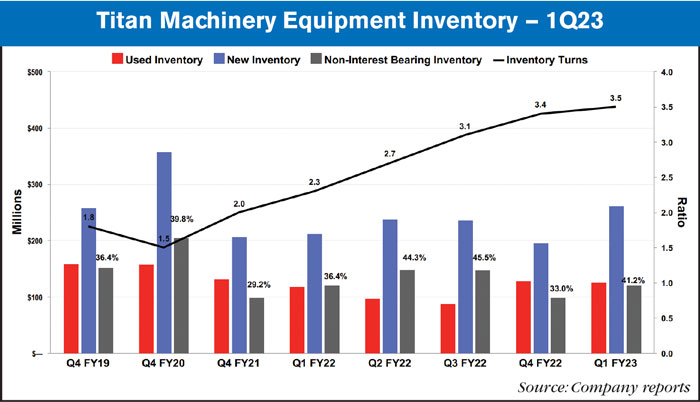 "We are very pleased with the level of inventory shipments received from our suppliers during the first quarter," said Mark Kalvoda, Titan's chief financial officer and treasurer. "The receipt of these orders generated the higher sales performance and are reflected in the $66 million increase in new equipment inventory in the quarter. At the end of the first quarter, we drove another sequential improvement in inventory turns to 3.5 times. Given the favorable industry conditions, health of our inventory and ongoing supply chain challenges, I expect we will continue to operate at higher turn levels throughout the year."

The following are the Company's current expectations for fiscal 2023 modeling assumptions.