What Will California’s Tier 5 Emission Standards Mean for Ag Equipment?

In this episode of On the Record, we look at the Tier 5 emission standards being proposed for California and what it could mean for the ag equipment market. In the Technology Corner, Michaela Paukner looks at how Krone and Lemken partnered to create an autonomous machine for forage harvesting and tillage, the Combined Powers machine. Also in this episode: CNH Industrial CEO Scott Wine addresses competition between the company's Case IH and New Holland dealers, and we take a look at Case IH dealer Titan Machinery's fiscal year 2022 earnings report.

Dealers, manufacturers and their customers may be facing Tier 5 emission standards in California by the end of the decade.

On Nov. 3 of last year, the California Air Resources Board held a public workshop to discuss “more stringent exhaust standards for all off-road engine power categories.” California’s Tier 4 standards were adopted in 2004, and the Board states on its website that with modern technology, greater reductions in emissions “are now feasible beyond the current Tier 4 standards.”

The Board’s proposal is tentatively scheduled for consideration in September 2024 and would be implemented in 2028. 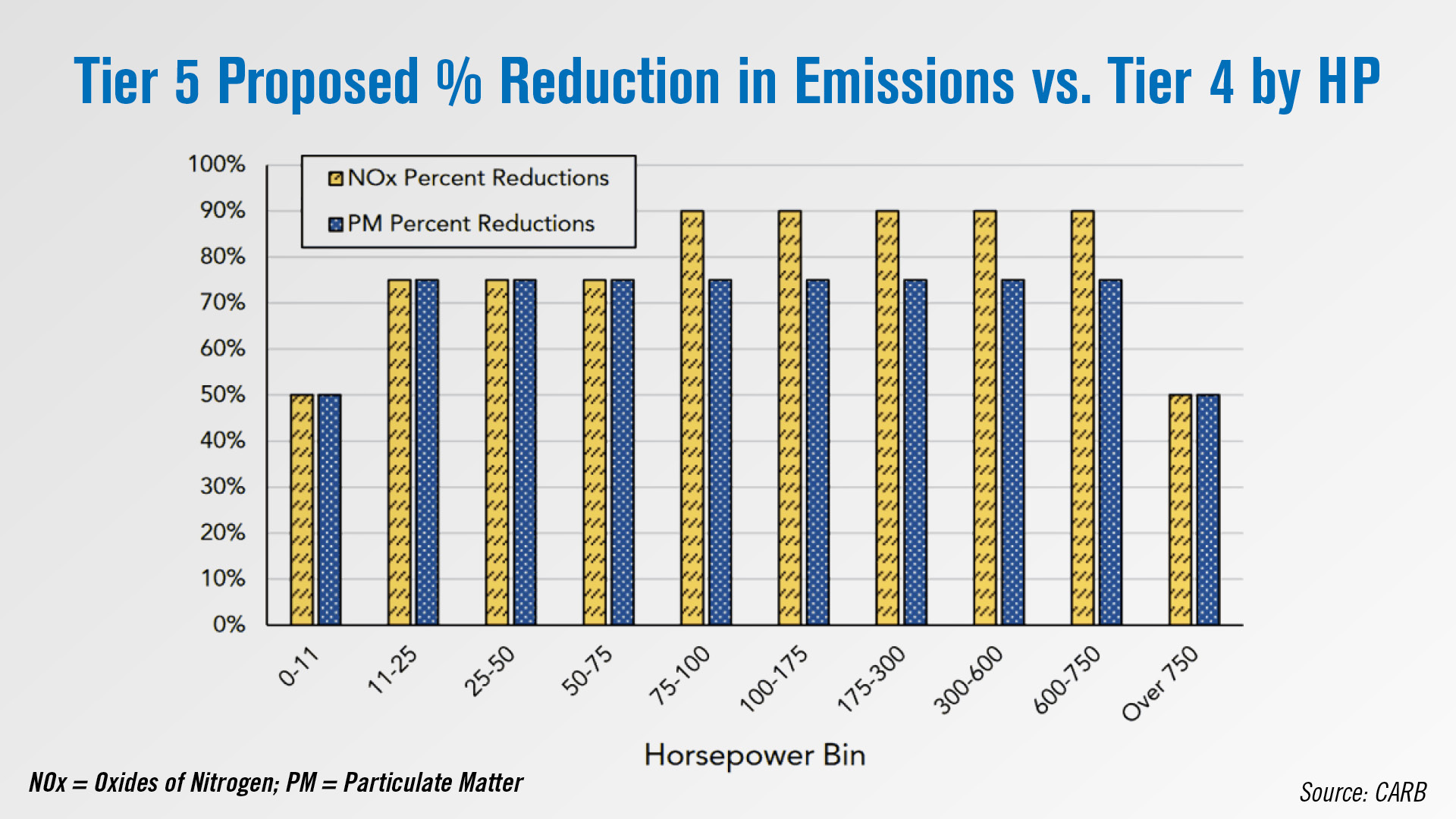 According to a November 2021 report from Diesel Net, California’s Tier 5 standards will require a similar standard being enacted by the Environmental Protection Agency to be effective. The federal Clean Air Act Amendments of 1990 preempt California’s authority on controlling emissions on new farm and construction equipment under 175 horsepower. Additionally, since there are no regulations prohibiting non-compliant equipment being brought in from other states, Tier 5 standards raising California equipment costs could see customers leaving the state for purchases.

Hennigan says she expects the Tier 5 regulations will positively influence the sales of electric equipment. She doesn’t expect Tier 5 standards to bring another 25% price increase like Tier 4 standards did, but she says Tier 5’s presence will further alert buyers to the advantages of electric farm machinery, saying:

“Battery technology will be advancing at the same time that diesel prices will be going up. The changes in pricing will benefit the electric-powered units.”

Hennigan adds that she believes California’s non-emissions regulations will soon be raised to the subcompact and compact tractor categories as well, predicting it will happen before 2027.

This week’s Dealers on the Move include C&B Operations and Butler Ag Equipment.

According to a report from Keloland, 37-store John Deere dealer C&B Operations plans to move its field support office to Sioux Falls, S.D., from the Twin Cities area. The report stated C&B Operations will take the top 2 floors of a 9-story building and plans to have 100 or more employees working out of the Sioux Falls office.

Butler Ag Equipment, a now 20-store AGCO and Claas dealer based in the Dakotas, recently announced its 20th location in Sidney, Mont., according to a report from Roundup Web. This is Butler’s first location in Montana.

Shortlines Krone and Lemken partnered to create an autonomous machine for forage harvesting and tillage.

The machine has a cabless diesel-electric drive unit capable of up to 170 kilowatts or 230 horsepower to pull various implements.

The implement controls the drive unit, a detail the companies considered “imperative” for optimal results. The implement and the drive unit act as one integrated smart system, communicating with each other using ISOBUS and Tractor Implement Management. Multiple sensors and artificial intelligence detect obstacles and keep the machine running safely.

The operator will control and monitor the Combined Powers system from a mobile device. The operator can transmit jobs and job reports via a communication module and a data exchange hub called the agrirouter.

Combined Powers is an exclusively proprietary development — from the frame and driveline to the software. It’s specifically designed for Krone and Lemken attachments and automation of forage harvesting and tillage.

The autonomous unit is meant for 24-hour use all year round. It’s positioned as a solution to skilled labor shortages in agriculture and as a way to increase farmers’ efficiency and productivity.

Combined Powers will undergo intensive trials in all types of conditions this year, as Krone and Lemken seek feedback from farmers and contractors about the units.

The companies didn’t announce where the trials are happening and did not respond to a request for an interview about Combined Powers by the time of this recording.

CNHI CEO: We Will ‘Support … but Not Mandate’ Dealer Consolidation

Thanks, Michaela. In an investor Q&A session at CNH Industrial’s Capital Markets Day, held in February of this year, CEO Scott Wine was asked about the company’s dealer optimization for both its ag and construction business and specifically about consolidation incentives.

In his response, Wine did acknowledge there was work to be done with New Holland and Case dealers competing in the same areas and that the company has seen consolidation as a result of that competition. He says the company will “support and facilitate but not mandate” this consolidation.

“I think the one area to possibly clean up, if that’s a term I can use, is, because of the history of brand competition, there are places where we have New Holland and Case dealers perhaps closer to each other than is necessarily helpful. And so we’ve already seen consolation happen in those markets. I think we’re seeing some of our larger, better dealers — and really, the dealer principals make all the difference in the world. So it’s not as much about where they are, it’s ‘Do we have the right people?’ And I think what we’re seeing across our network is the cream rises to the top, and so we will continue to support and facilitate that but not mandate it.”

Wine added that overall, he was “very pleased” with the CNH Industrial’s distribution networks.

Titan Machinery Revenue Up 21% in FY22

Case IH dealer Titan Machinery reported its fiscal year 2022 earnings on March 24, including a 21% in revenue for the year. 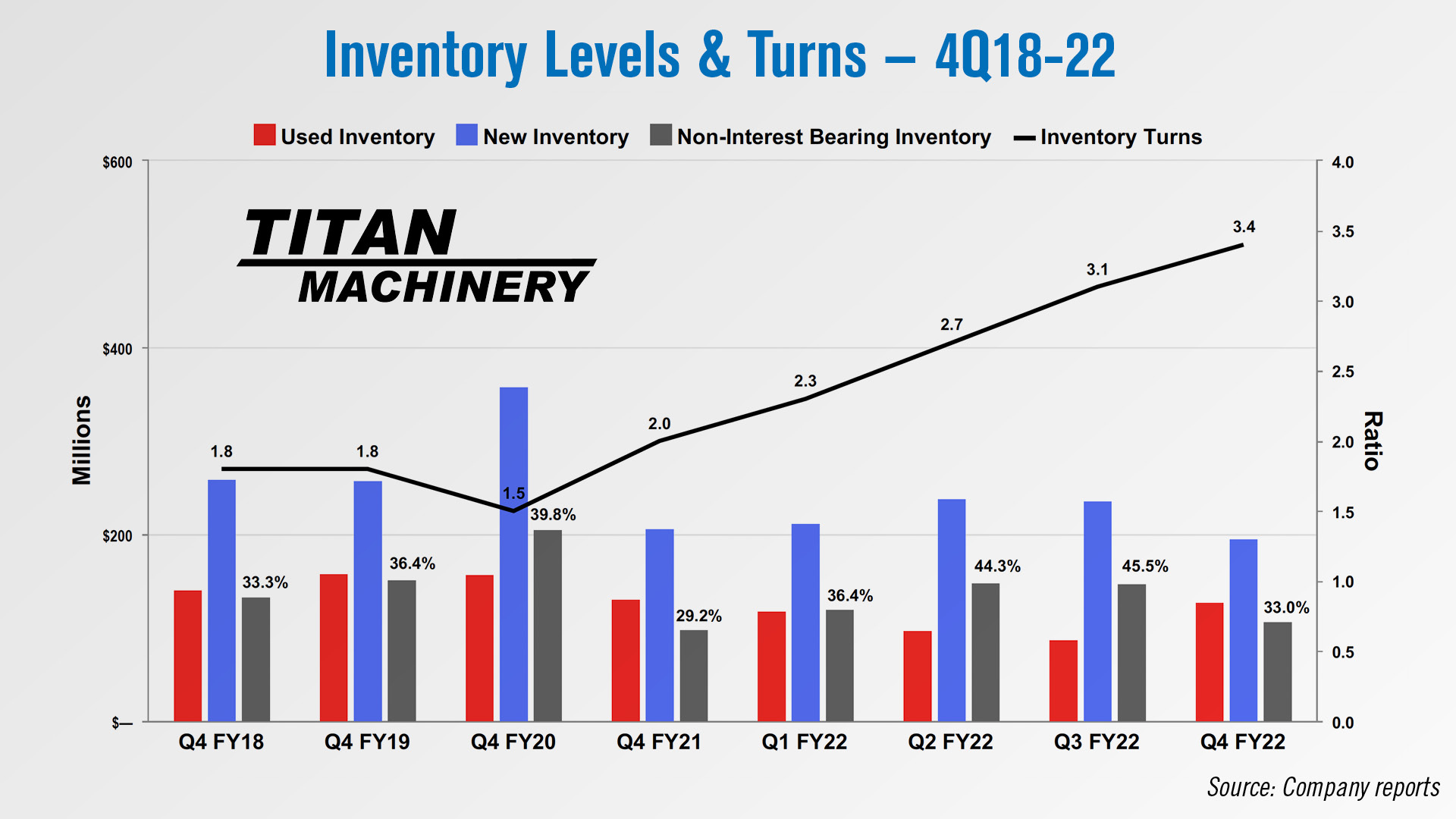 What Tier 5 Emission Regulations Will Mean for Ag Equipment

What Do Severe Storms in Iowa Mean For Crop Yields and Ag Equipment Sales?