In this week's episode we look at how ag equipment manufacturers compare to other machinery sectors in their recovery. In the Technology Corner, Michaela Paukner looks at how the massive “all-in-one” machine by NEXAT handles every work step in production agriculture, including soil cultivation, sowing, crop protection and harvesting. Also in this episode: a number of dealers are making acquisitions in Dealers on the Move, Deere acquires battery technology provider Kreisel Electric and Ben Thorpe examines how the major OEMs' R&D expenses compare to their ag sales.

Adrian Lloyd, CEO of Interact Analysis, says the ag sector saw growth during COVID-19 lock downs as eating habits changed and there was an uptick in demand for fruit, vegetable and meat from household consumers.

Lloyd says a number of factors points to the short-term future being healthy for farm equipment manufacturers. He says, “Firstly, crop prices are currently very high and this, coupled with high yields and low interest rates, has encouraged agriculturalists to open their wallets and invest in new equipment. Furthermore, sluggish activity in the market over the previous five years has meant that many farmers are using old machinery and are getting ready to replace or upgrade their machines. 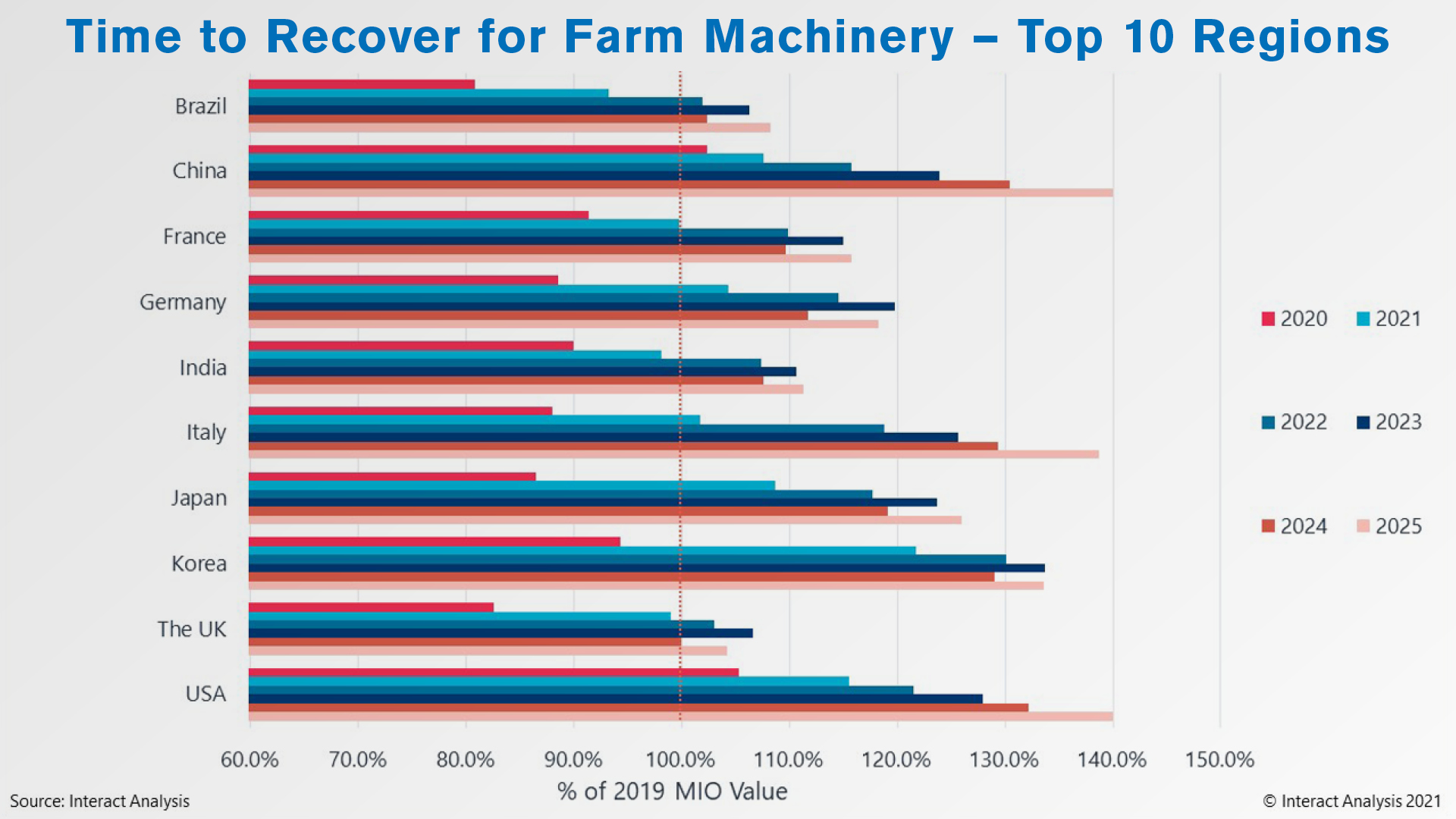 Interact Analysis predicts overall growth in the sector to reach 12.3% in 2021, with machinery manufacturers in Japan, Korea, Italy and Germany all posting double-digit growth. Japan’s growth is expected to be in excess of 20%.

The dealership also announced it is relocating its Texarkana, Texas location. The new location is currently under construction and will sit on 22 acres.

John Deere dealer Gooseneck Implement has announced plans to build a new dealership in Dickinson, N.D. This new location will house the parts, sales and service all in one location. This will be the dealership's 14th store.

P&K Equipment has expanded to a total of 20 locations with the acquisition of Standridge Equipment, Co., a John Deere dealership with locations in both Chickasha and Duncan, Okla. The two newest locations will join P&K Equipment’s 18 existing locations, including 16 throughout Oklahoma and 2 in Arkansas.

A massive “all-in-one” machine by NEXAT can handle every step in production agriculture autonomously, from soil cultivation and sowing to crop protection and harvesting.

The holistic crop production system is based on the interchangeable carrier vehicle that you see here. It drives horizontally on the field and vertically on roads. The technology needed for each step in production can be installed as a module on the machine, and the system can operate autonomously.

The company says swapping modules can be done by one person in 10 minutes, with plans to automate this step in the future.

The system has working widths from about 19 feet to nearly 79 feet. An operator can monitor the machine working from a swiveling booth on the end of the system. The machine’s electric generators are powered by two 550 horsepower diesel engines, and the system is prepared for green hydrogen fuel cells. NEXAT says the all-in-one machine delivers 50% more power with 40% less weight.

The vehicle can be used for controlled traffic farming and is prepared for full autonomy because of its consistent working width. NEXAT says the machine won’t drive over 95% of the total arable area. The company translates the reduction in compaction to a possible 10-20% yield increase and a 20-50% increase in profitability for a grower.

The system has been successfully used in crop production under real conditions for 3 years, including for corn, soybeans and sunflowers. It recently won a 2022 gold Agritechnica Innovation award.

NEXAT was founded in 2017 by Kalverkamp Innovation with help from other agricultural manufacturers, including Swedish ag equipment company Väderstad.

According to Deere’s press release, the acquisition will allow Deere to integrate vehicle and powertrain designs around these battery packs while leveraging the charging technology to build out infrastructure for customer adoption.

Deere said it anticipates a growing demand for batteries as a sole- or hybrid-propulsion system for off-highway vehicles, with products like turf equipment and compact tractors possibly using only battery power.

Senior Analyst with RW Baird Mig Dobre said in a note to investors that the fast-charging infrastructure could play a crucial role in Deere’s electric equipment offerings.

“Fast charging capabilities remain a barrier to widespread off highway EV adoption. Offering a one stop solution of equipment and infrastructure will increase adoption.”

Kreisel’s charging infrastructure would also give farmers the ability to charge their equipment with wind or solar power according to Dobre, which could “relieve the cost pressures of power grid charging during peak hours.”

R&D data reporting does vary slightly by manufacturer and the expenses reported here are not specific to ag equipment sales and likely include expenses put toward other segments.

AGCO’s R&D expenses as a percentage of its ag sales were the lowest each year for the last 5 years, peaking at 4% in 2016. AGCO also reported the least total R&D expenses of any manufacturer each year, with a high of $355 million in 2018. 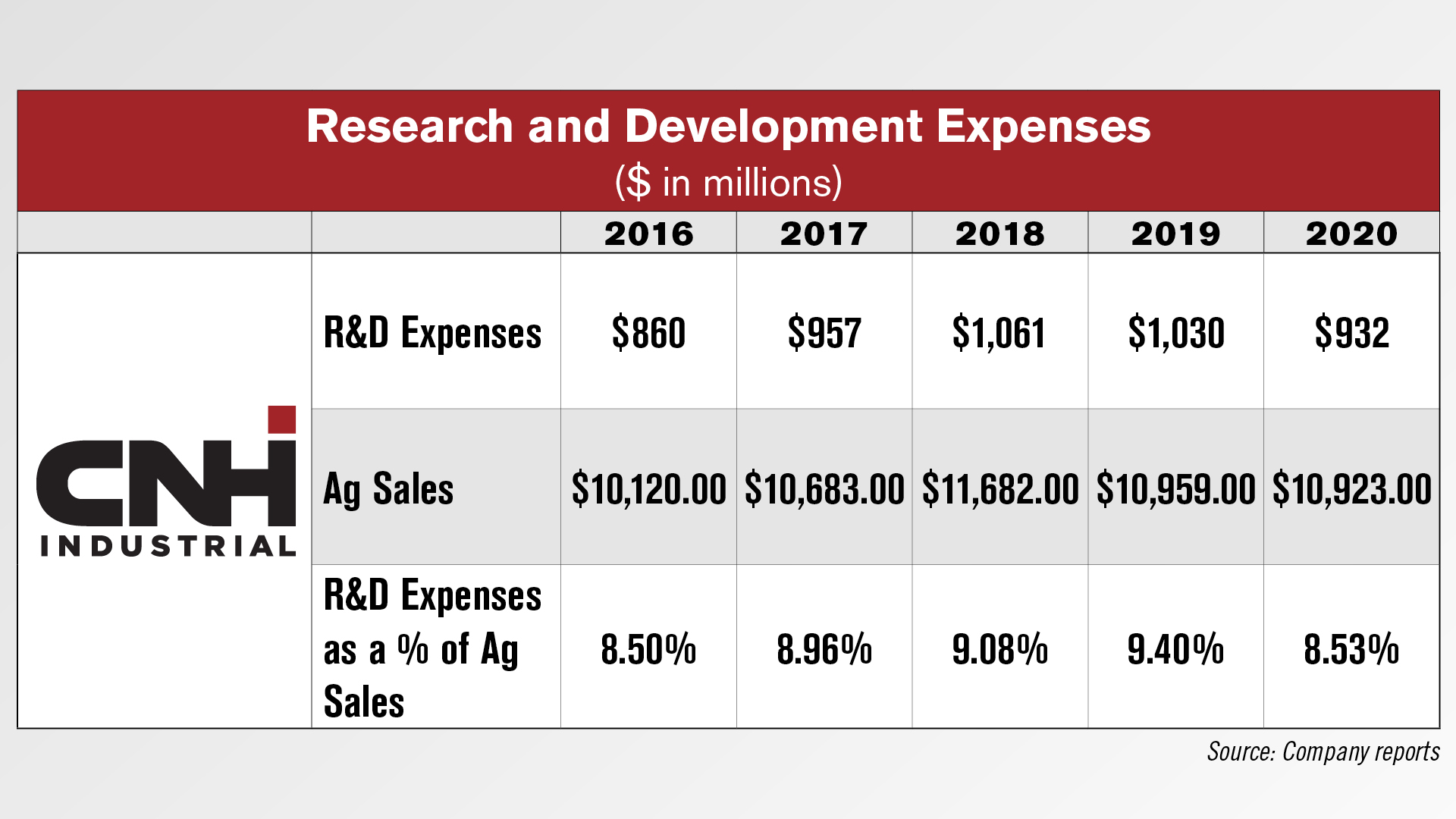 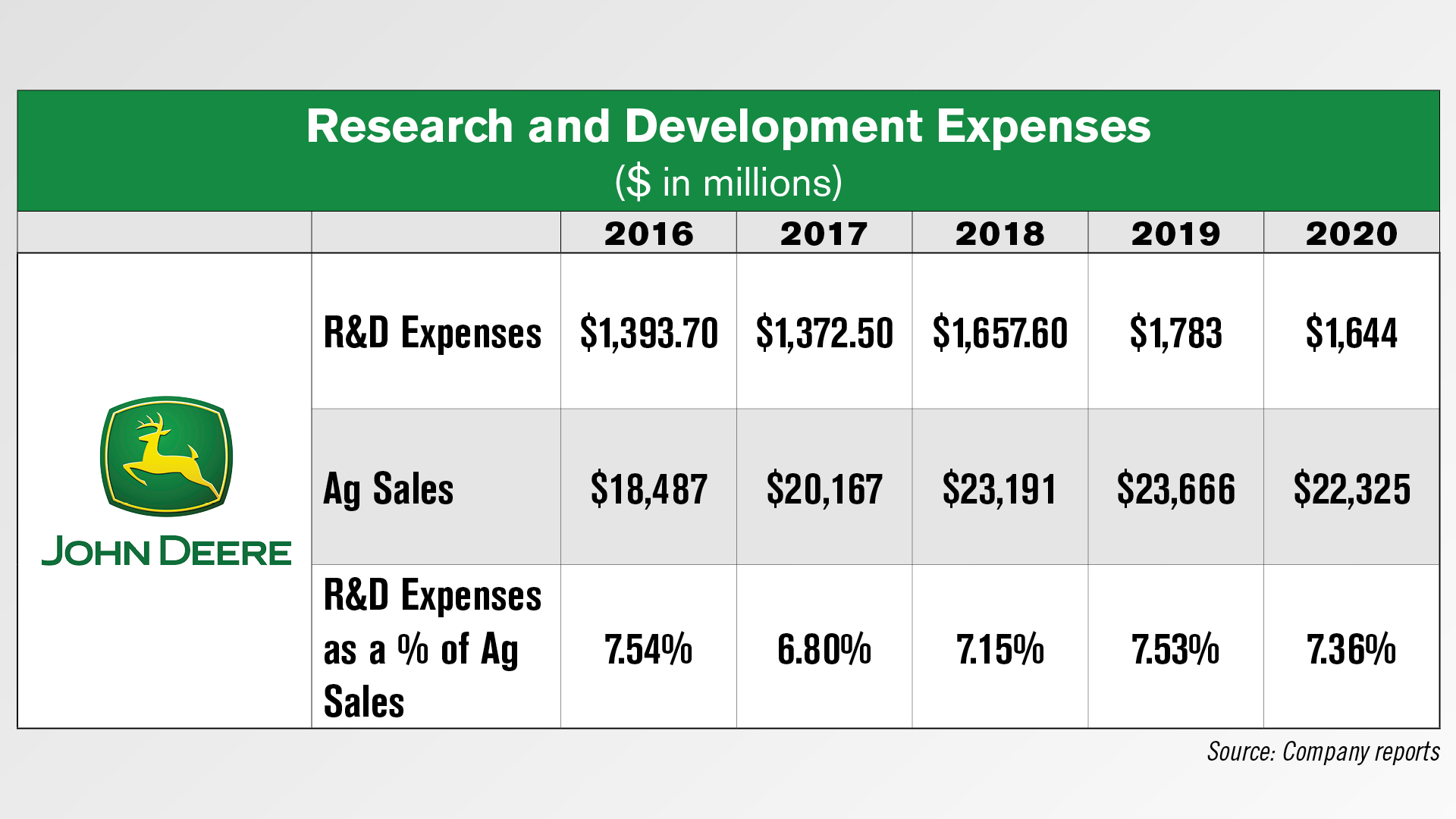 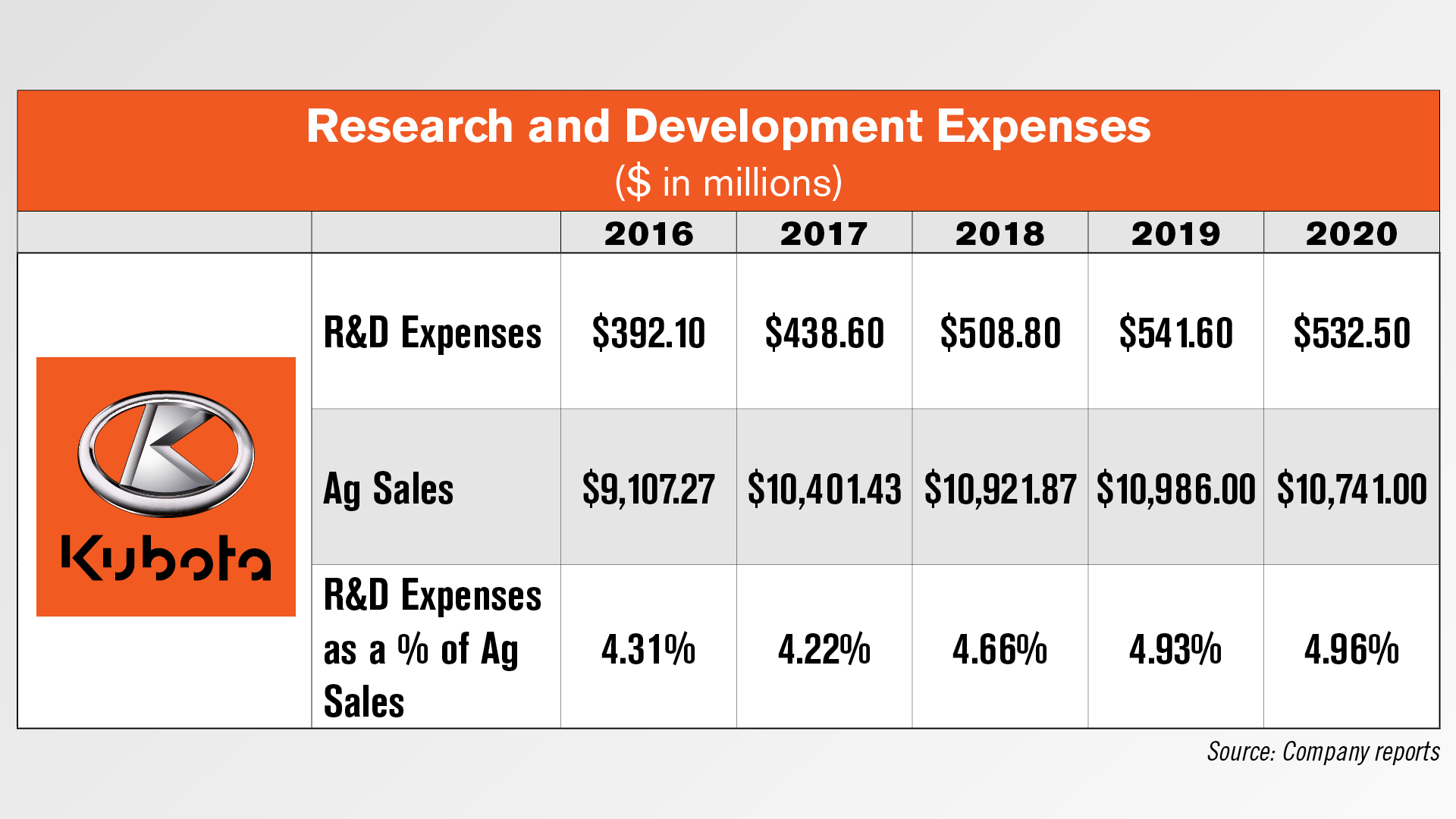