In this episode, we dig into some of the results of survey Ag Equipment Intelligence conducted Nov. 15-17 on farmers year-end tax plans and dealers' forecasts for December revenues. Also in the episode: After 5 weeks the Deere-UAW strike has come to an end and Buhler, manufacturer of the Versatile and Farm King brands of equipment, reports its fourth quarter revenues dropped. In the Technology Corner, Michalea Paukner looks at the timeline of how autonomous ag equipment has progressed.

After 5 weeks and 3 proposed labor agreements, the Deere-UAW strike has come to an end. On Nov. 17,  61% of UAW John Deere members voted in favor of ratifying what Deere had called its “last, best and final” offer.

Operations resumed for the third shift on Nov. 17. 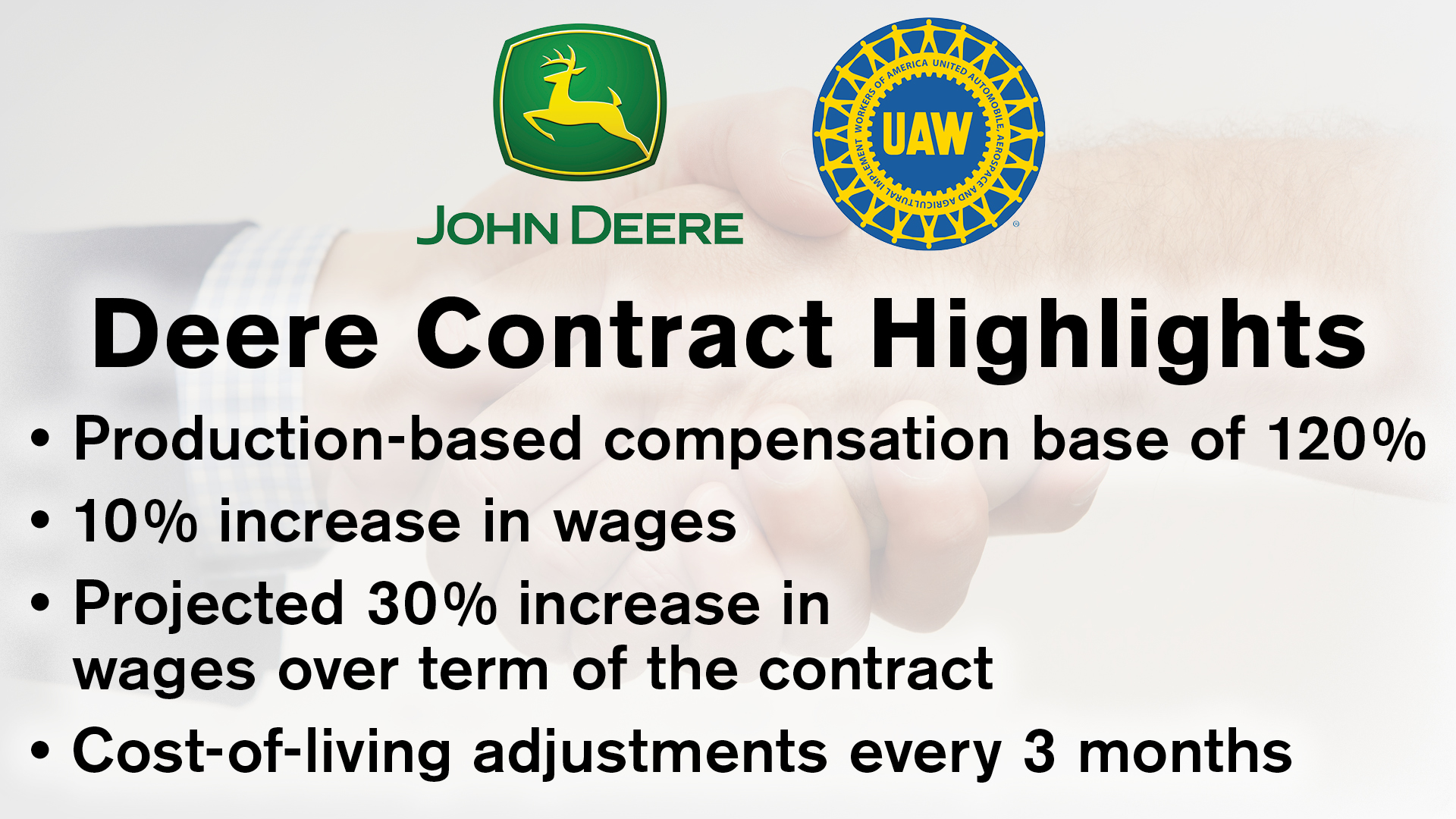 According to a report from the Wall Street Journal about 66% of Deere workers receive production-based compensation. The ratified agreement increases the baseline for workers in the program from the previous 115% level of their weekly pay to 120%. This means Deere expects employees to routinely earn 20% more than their regularly weekly pay through higher output.

Wages will increase immediately by 10% with projected increases of 30% over the term of the contract. This amounts to a $6-9 hourly wage increase. In addition to those increase, the agreement includes cost-of-living adjustments every 3 months to protect employee wages against inflation.

For on-going coverage and the most up to date details on the Deere strike and new contract — including over 40 individual updates from the last 5 weeks, visit AgEquipmentIntelligence.com/DeereStrike.

This week’s Dealer on the Move is Brandt Tractor. Brandt Tractor CEO Shaun Semple told Ag Equipment Intelligence that, while an announcement has not yet been made, all Cervus Equipment locations will be rebranded as Brandt Tractor locations. Semple also confirmed Brandt Tractor will continue carrying the same shortline equipment brands Cervus had previously carried.

He added that, going forward, Brandt Tractor is looking to “bolster the support and services” previous Cervus Equipment locations offered and ensuring they have the “proper amount of people properly trained.”

Fully autonomous vehicles may be closer — and more necessary — than you think.

That’s the argument of Bill Lehmkuhl, owner of Precision Agri-Service, an independent precision dealer group headquartered in Ohio. Today, we’re taking a look at some of the highlights on his autonomy timeline.

The Fendt and Trimble Guide Connect, launched at AgriTechnica in 2011, featured a driverless tractor that automatically followed another operating tractor. The operator in the leading tractor could monitor and control both vehicles.

Other manufacturers soon followed suit. Kinze debuted its autonomous grain cart in 2013, which could follow the combine through the field, receive the load from the combine, and return and park following unloading.

The CNH Autonomous Project resulted in a cabless Case IH Magnum in 2016. The demonstration promoted seeding, planting and tillage for broad-acre and row-crop farming, and gave farmers a glimpse of how they’d be able to manage fields and oversee the operation of several vehicles at the same time.

Two years later, the DOT autonomous power unit debuted. This video of it is from 2020 — after Raven Industries acquired the company. The diesel-powered autonomous platform coupled with implements to drive itself and perform farming functions.

Sabanto Ag launched its custom planting project in 2019, which used remote-controlled tractors pulling a planter to seed several thousand acres of soybeans in the Midwest.

In 2020, Raven unveiled its AutoCart, which was later rebranded as OMNiDrive. The technology allows a combine operator to call a driverless tractor with a grain cart to follow alongside the combine and receive the load. CNH purchased Raven this year.

Looking to the future, Lehmkuhl says dealers may need to prepare to make additional investments in equipment and employees to service OEM units, standalone integrated platforms, swarm-type units and more.

“Autonomy is already in agriculture in many different forms. Some people just don't realize it. But in my mind, it's the next auto-steer. Autonomous vehicles won't be for everyone. But I think in the next 5 to 8 years, we'll see a big influx in this type of technology and autonomous vehicles.”

The 2022 Precision Farming Dealer Summit this January will feature a panel discussion on preparing your dealership for autonomy. For more information and to register for the event, visit precisionfarmingdealersummit.com.

Farmers, Dealers Weigh in on Next 6 Weeks in November 17 Survey

In this most unusual year of high farm incomes, rising inputs and scarce supply of nearly everything, Ag Equipment Intelligence conducted a survey on November 15-17 on the year-end situation, that drew 257 growers and 80 dealers.

First for the survey of farmers on November 17. AEI asked growers what will be different about their year-end tax-plans this year.

For those making a living in the farm equipment business, their responses show there’ll be high competition for their dollar over the next month and a half. Farmers are planning significant pre-purchases for ALL major farm consumables, led by liquid fertilizer, as more than one-third of growers are increasing their normal pre-paid purchases before December 31. 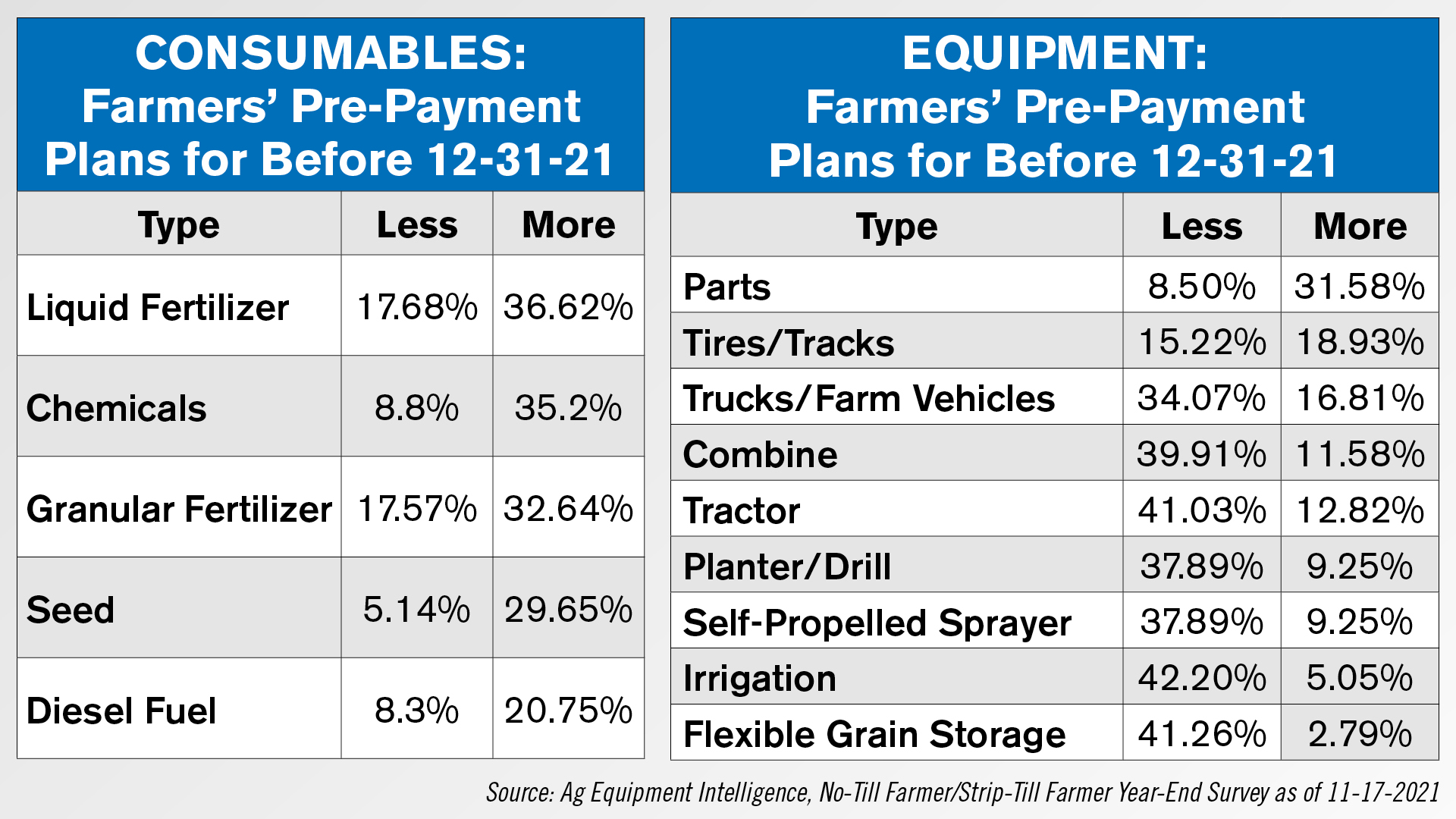 Pre-purchase plans for iron is a different story. While 31% of farmers plan to stock more parts than they typically would, most farmers are significantly reducing their big-ticket equipment pre-purchases in ALL categories, either because of choice, availability or both. As AEI learned in its dealer survey, about 20% of dealers are forecasting measurably more prepaid 2022 parts before the end of the year, possibly a lower number than the farmers since they know the availability situation.

And now, what equipment dealers see for the next 6 weeks. 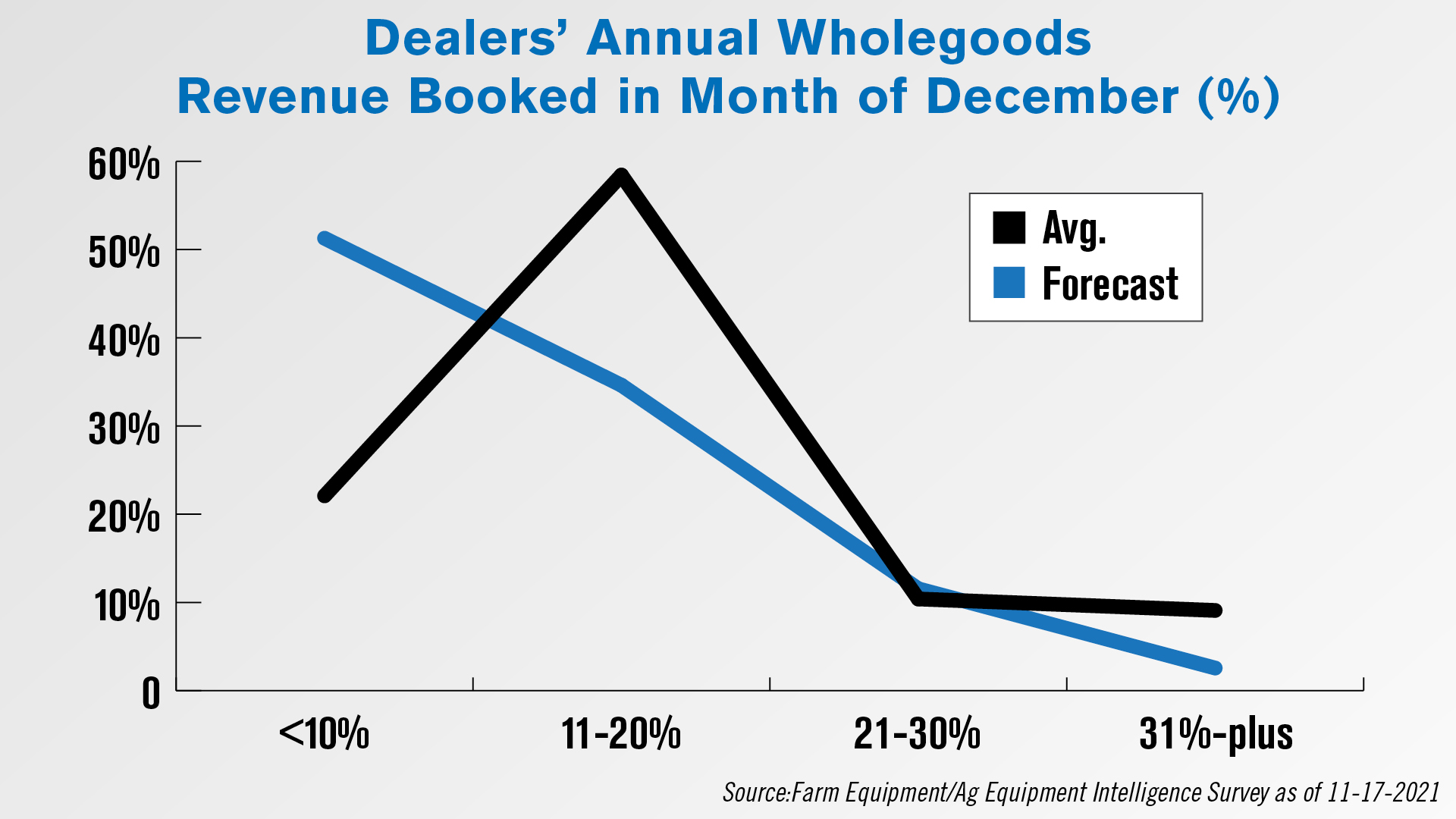 Most of the dealers (58.44%) say a typical December usually brings in 11-20% of the year’s total wholegoods income. Yet most dealers are forecasting a disappointing December this year. More than one-half say they’ll finish 2021 with a month that falls below 10% of the total sales. In other words, the percent of dealers who’ll earn less than 10% of the year’s revenue in December is more than doubling this year.

In addition, only 2.5% of dealers report that next month could bring a sales level equal to 30% or more of the year’s wholegoods business, a number that is 3.5 times fewer than a normal December’s performance.

On-hand inventory is among the problems. 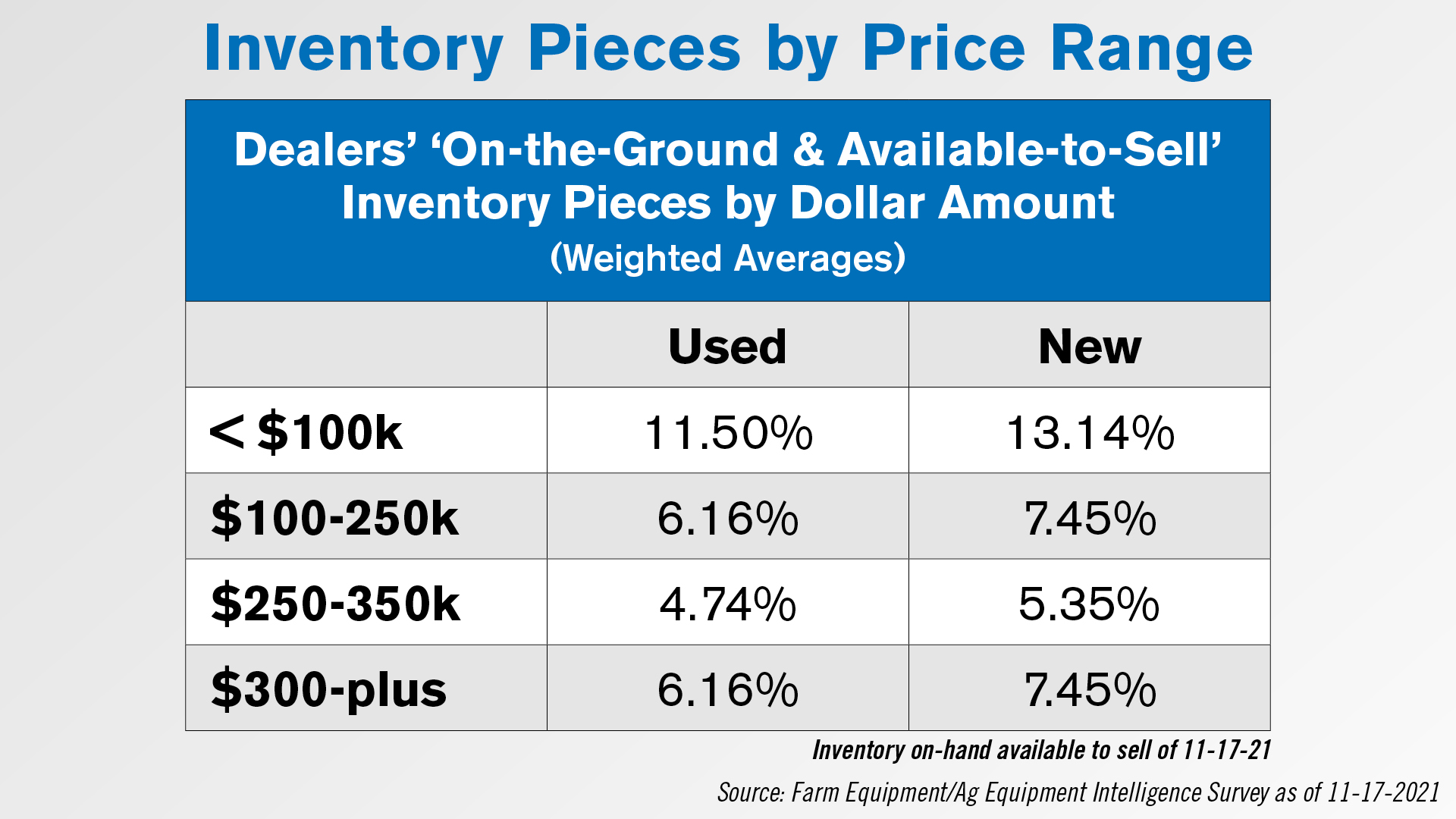 Through a survey of on-hand inventory and price range, it was clear that dealers report a real dearth of both used and pieces priced above $100,000. With under $100,000 priced units being the only exception, most dealers report 5 or fewer pieces on-hand in each of the other 3 larger price categories surveyed.

And deliveries of already ordered equipment is another big challenge. 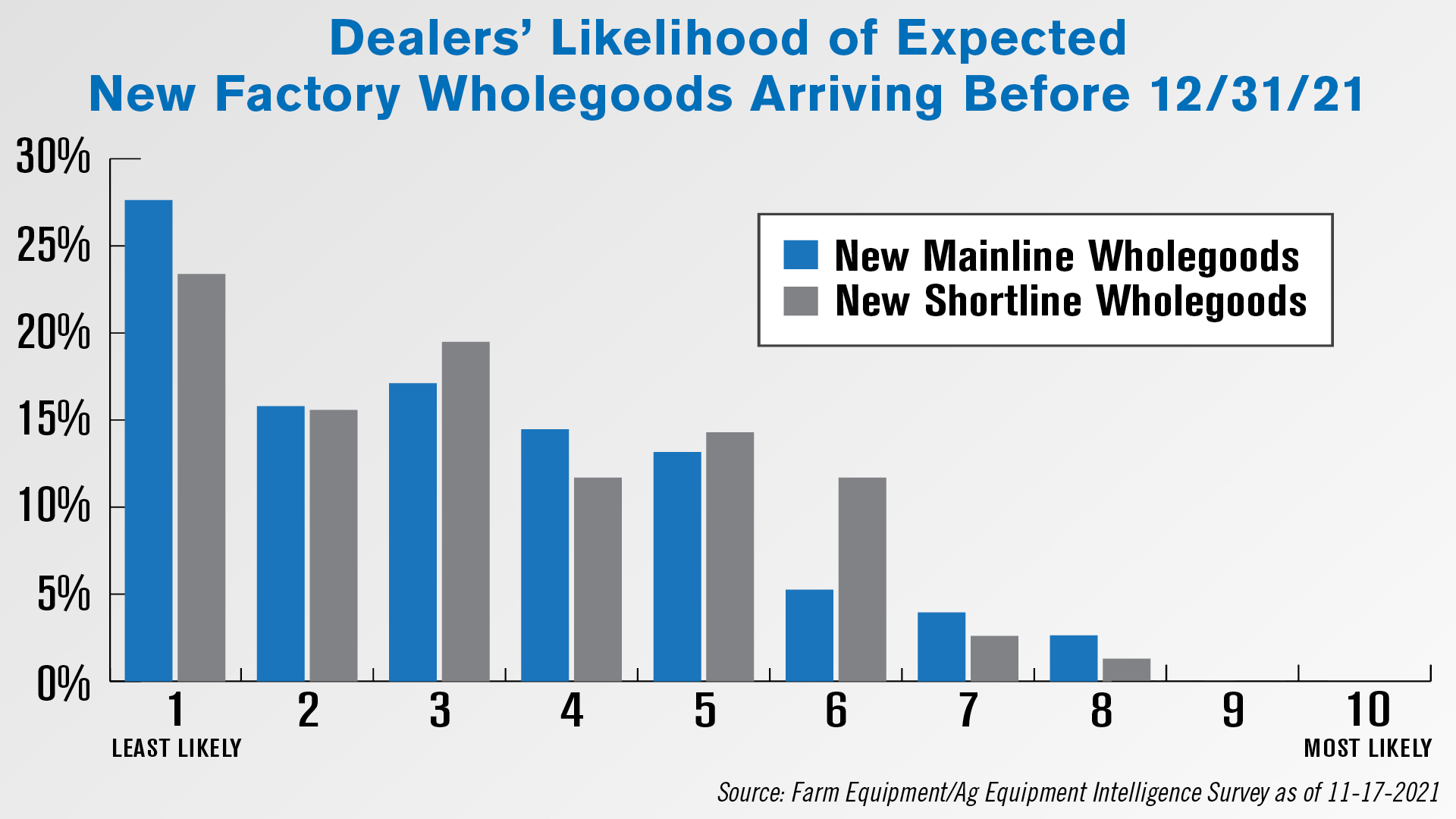 Dealers were extremely negative on the prospects of deliveries of orders -- from both their mainline and shortline suppliers -- arriving before New Year’s Eve. For both types of equipment, dealers’ confidence level is in the low 30% range.

The survey showed almost no optimism on deliveries. Just one-fourth of dealers believe there’s a better than 50% chance of seeing their new mainline inventory orders arrive this year, with only slightly more who expect shortline manufacturers to perform any better than the majors.

Nearly two-thirds of dealers expect a worse year for new wholegoods deliveries in 2022.

But most critical on the minds of some dealers were 2022 seeding equipment orders, and whether they’ll show up in time for their customers to take to the field next spring... 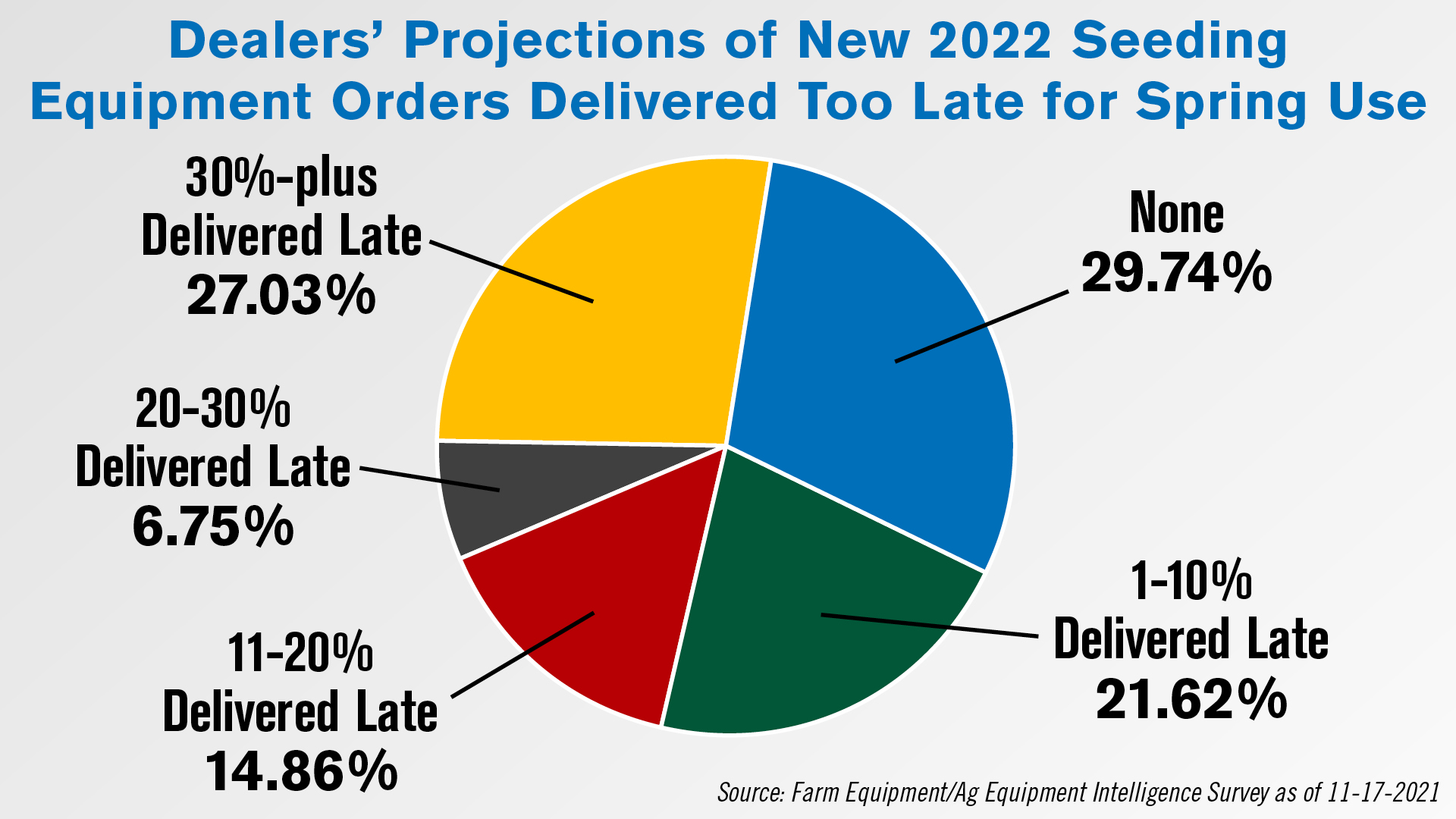 More than 70% of dealers expect some degree of planter orders will fail to show up for spring planting, with more than one-half now expecting 10% or more of their ordered planters won’t to arrive in time. The concern is even more critical for some, as 27% of dealers project that almost one-third or more of their planter orders will fail to arrive in time.

More in-depth analysis of this just completed year-end survey data of both farmers and dealers, as well as further detailed breakouts, will be made available shortly to paid subscribers of Ag Equipment Intelligence and pre-registrants of the Executive Briefings Virtual Event.

In its latest earnings report, Buhler Industries, which manufactures the Versatile and Farm King brands of equipment, reported declining sales in the fourth quarter of 2021, which it attributed to supply chain issues. 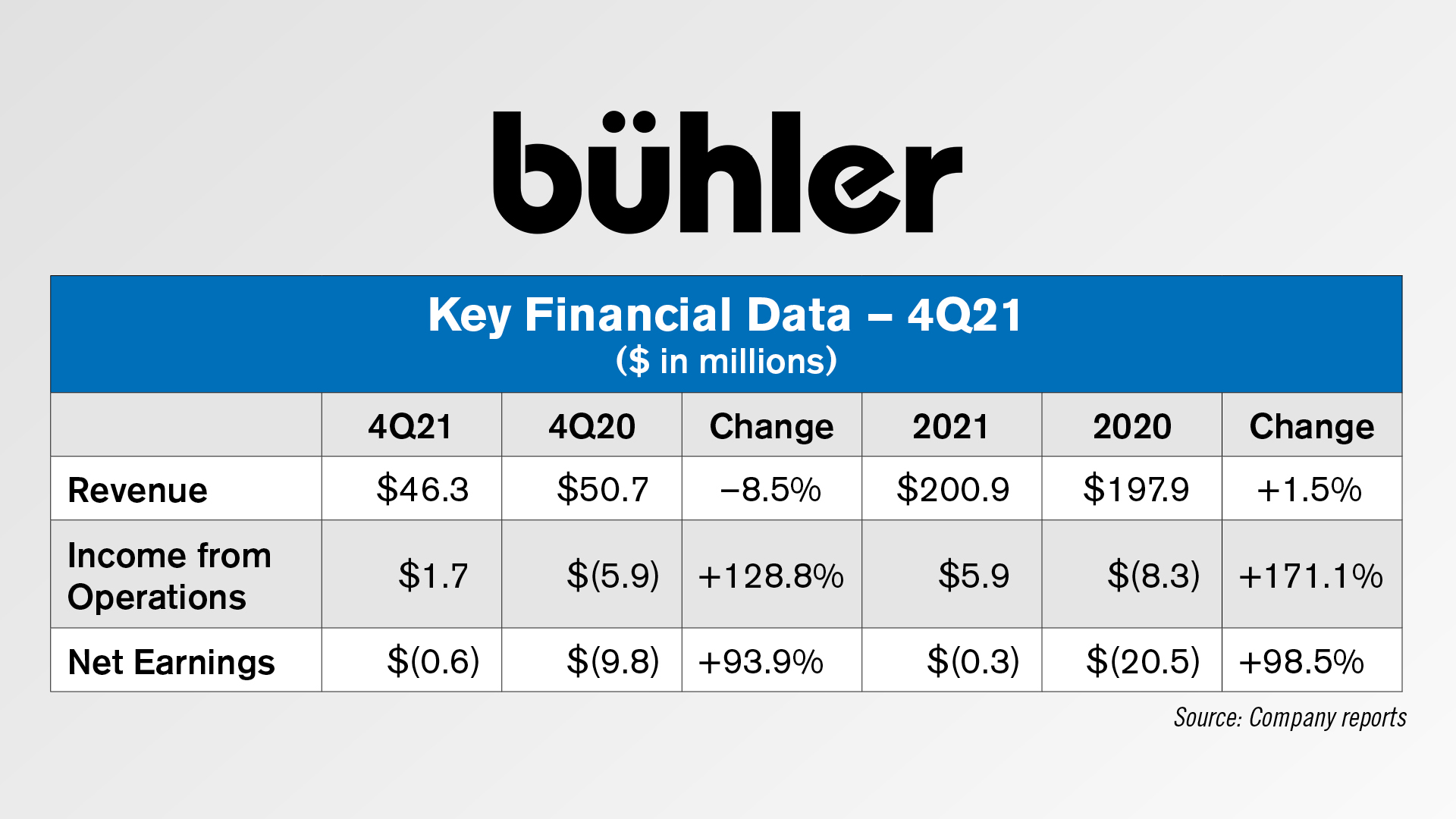 Buhler said in its press release that demand for its products was strong and that the company continues to increase production to address a growing order backlog.