In this week’s episode, a net 82% of dealers report their new equipment inventory is too low and say they are seeing price increases from the OEMs ranging from 4% to as high as 22%. In the Technology Corner, Michaela Paukner reports on the proposed precision loan program Sen. Deb Fischer and Sen. Amy Klobuchar recently introduced. Also in this episode, German shortline manufacturer Horsch says it will almost double production capacities with a number of world-wide investment projects within the next 2-3 years. According to the 2022 Dealer Business Outlook & Trends report, dealers are forecasting new equipment revenues to increase next year, along with price increases from their OEMs. And, the Business Climate Index for the Agricultural Machinery Industry in Europe dropped for the third month in a row to 63 points. 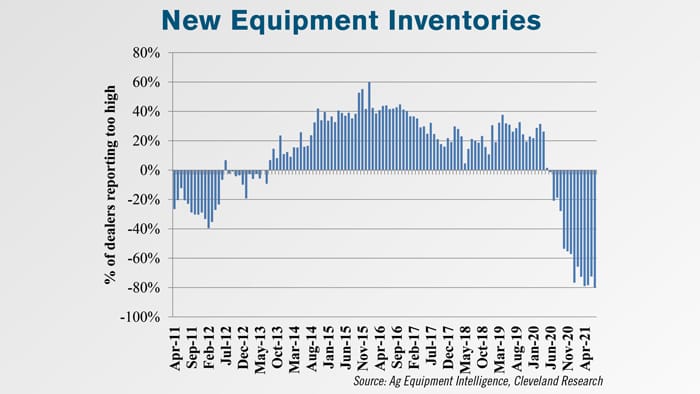 The latest survey also showed price contribution was up 3.1% in August, vs. up 2.7% in July.Commentary suggests the increase in price is the result of freight and material surcharges. 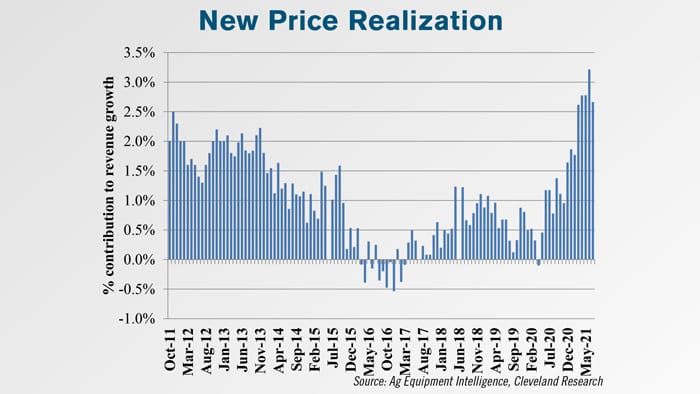 Dealers have reported steel surcharges as low as 4% and as high as 22%. Long-time dealers say they’ve never seen anything like this.

Leo Johnson, dealer principal of Johnson Tractor says, “I’ve seen price increases, steel surcharges, fuel surcharges and a host of other pricing gouges in my 40 plus years of doing this, but never to the level we’ve seen in the last 12 months. My only experience with this hyperinflation was visiting Brazil 25 years ago when the restaurants had to go to chalk boards instead of printed menus because they had to raise the prices every day!”

This week’s Dealers on the Move are Marshall Machinery and Pattison Agriculture.

Canadian John Deere dealer Pattison Agriculture announced plans for a new facility in Humboldt, Sask. The project will span over 30 acres, with 51,000 square feet in the main building, plus an additional 16,000 square feet of storage. The Humboldt location is expected to transition to the new building as early as December 2022.

A new bill introduced in the U.S. Senate would provide loan financing to farmers and ranchers to purchase precision agriculture equipment.

The act would create a program within the U.S. Department of Agriculture to provide loans at interest rates lower than 2% with loan terms from 3 to 12 years in length. Under the proposal, farmers could take multiple loans up to an aggregate limit of $500,000 to use on any precision technology that improves efficiency or reduces inputs.

“My bill would help the math start to make sense for our producers who would like to adopt these technologies, but they haven’t been able to afford them,” Fischer says.

The Association of Equipment Manufacturers released a statement supporting the act, saying it gives farmers a new set of tools to help achieve climate goals while continuing to feed and fuel the world.

Scott Hoober — one of the owners of the 10-store dealership Hoober Inc. in Pennsylvania, Delaware, Maryland and Virginia — also sees the act as good for dealerships’ business.

“Most dealerships today have a significant precision ag department or individuals who are involved with precision ag, so that can add additional customers to our customer base, and the customers that are there, help them to invest even more,” Hoober says. “In either case, it could help to generate revenue in the dealerships.”

Under the proposal, farmers would be able to take loans to purchase new precision equipment or retrofit older equipment with new technology. Hoober predicts dealerships would see customers requesting a combination of both with the financing.

“Typically what we see is for those that aren't as heavily involved (with precision agriculture), we’re usually retrofitting to get them started,” Hoober says. “Once they start seeing the benefits on stuff that   retrofitted, then they'll trade up and go to a complete system that's already installed on a unit or a new unit completely. At the same time, it depends on the individual’s desires and in their ability to purchase new equipment.”

The bill has been referred to the Senate Committee on Agriculture, Nutrition, and Forestry. It must pass the Senate and House before heading to the president’s desk to be signed into law. As of Sept. 28, no future action has been scheduled.

In Germany, a $20 million project already underway will provide increased office accommodation and an additional assembly hall at the company’s Ronneburg facility for large cultivator and seed drill production by the middle of next year.

A new painting facility for the Schwandorf headquarters plant is likely to be completed by the end of 2022, and plans are being developed to increase assembly and painting capacities at Landau to cater for growing sales of Horsch crop sprayers, which now include tractor-mounted as well as trailed and self-propelled models.

Based on results from the 2022 Dealer Business Outlook & Trends Report, dealers’ forecasts for new equipment revenue were much higher than the last 2 years. Some 53% of dealers expect new equipment revenue to be up by at least 2% year-over-year in 2022, surpassing the 42% who forecast the same in last year’s report. 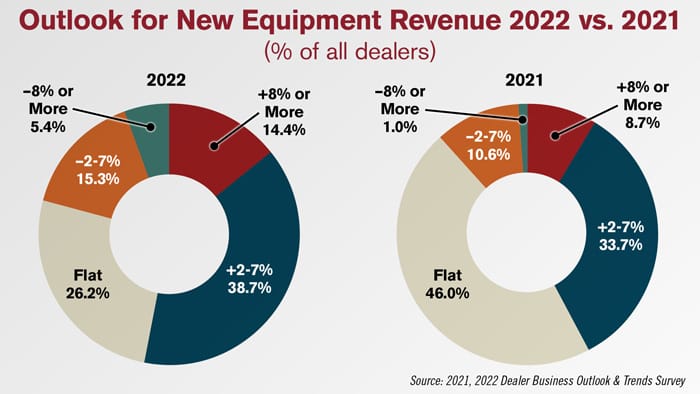 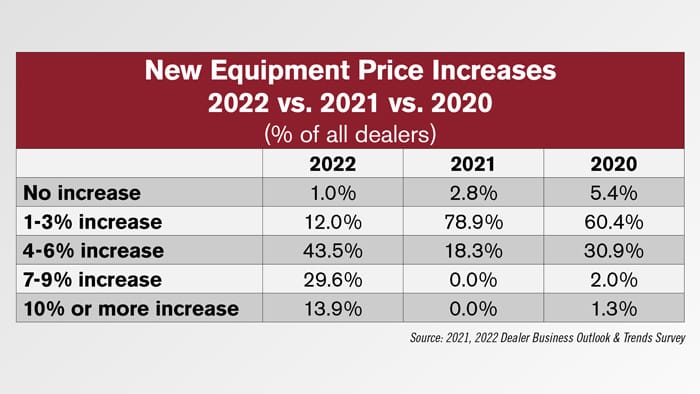 Just 1% of surveyed dealers expected no price increase from their OEMs in 2022, showcasing the severity of price increases as supply chains struggle to meet increasing demand.

The Business Climate Index for the Agricultural Machinery Industry in Europe seems to have reached its peak in May and June of this year. In September, the index decreased slightly for the third month in a row to 63 points and was the result of some companies evaluating their current business less favorably. 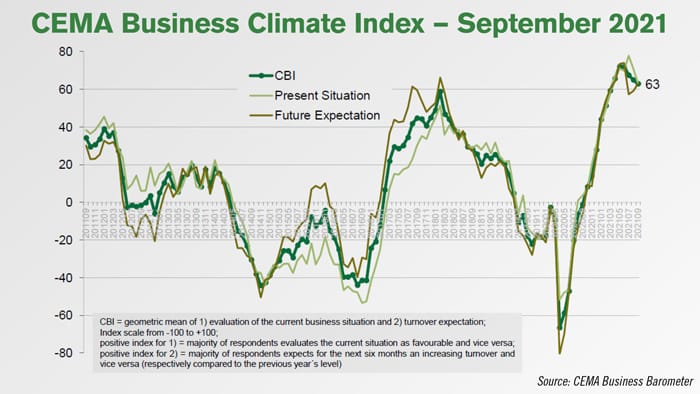 Uncertainty continues as to what extent orders can be realized against the backdrop of extreme price increases and shortages on the supplier side. Meanwhile, 40% of the companies expect a production stop due to a lack of certain parts in the coming month.

On the other hand, demand from end customers in Europe seems to remain robust. The industry still sees a high need for investment for almost all of Europe, especially among farmers within Central to Eastern Europe. Accordingly, every European market shows a majority of survey participants expecting turnover increases in the next 6 months.

Against this background, European industry representatives remain confident on closing the year with strong results. With regard to the full year 2021, on average, survey participants expect for their companies a turnover increase of 13%.

Dealers Report an Increase in Early Orders for 2021