The recent improvement in agricultural credit conditions continued into the second quarter of 2021, according to a recent report from the Federal reserve Bank of Chicago. Nominal interest rates on agricultural loans dipped to new lows for the survey: The District’s average nominal interest rates on new feeder cattle, operating, and farm real estate loans moved down to 4.55%, 4.4%, and 4.02%, respectively, as of July 1, 2021. After being adjusted for inflation with the Personal Consumption Expenditures Price Index, average agricultural interest rates were below the levels seen last in the third quarter of 1975. 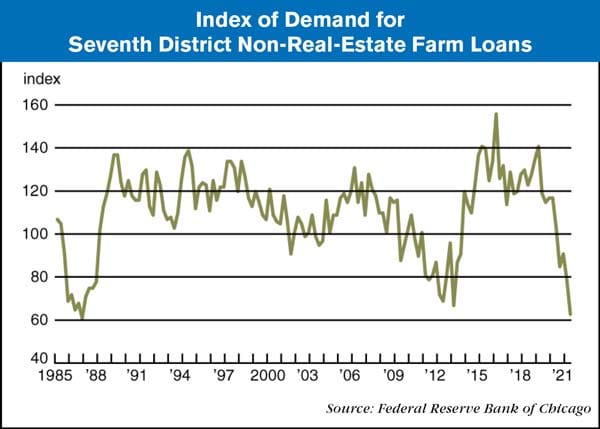 Even with lower interest rates in the second quarter of 2021, demand for non-real-estate farm loans was constrained. With 9% of survey respondents noting demand for non-real-estate farm loans above the level of a year ago and 46% noting demand below that of a year ago, the index of loan demand was 63 for the second quarter of 2021; this was the lowest reading since the fourth quarter of 1986. In line with these results, over the first half of 2021, District banks made fewer farm operating and real estate loans than normal, according to responding bankers. In contrast, over the first six months of 2021, the Farm Credit System, as well as merchants, dealers, and other input suppliers, reportedly lent more funds to the agricultural sector than the normal volume (and such lending by life insurance companies was at about the typical level). 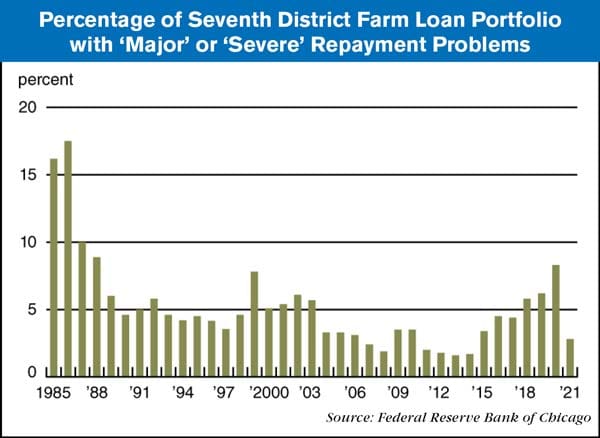 Higher crop prices and government disbursements combined again to help boost repayment rates for non-real-estate farm loans: The index of loan repayment rates was 146 for the second quarter of 2021 (48% of responding bankers noted higher rates of loan repayment than a year ago and only 2% noted lower rates). At 2.8% of the District loan portfolio, the share of farm loans with “major” or “severe” repayment problems (as measured in the second quarter of every year) was last lower in 2014—this result was a big turnaround from a year ago. Additionally, renewals and extensions of non-real-estate farm loans during the April through June period of 2021 were lower than during the same period of a year ago, as merely 3% of survey respondents reported more of them and 34% reported fewer of them.