Happy New Year! The latest episode of On the Record is now available. In this week’s program we discuss dealers’ record low used equipment inventory levels. In the Technology Corner, Jack Zemlicka discusses how the lifecycle of precision services are evolving. Also in this episode, the latest earnings reports from Buhler, manufacturer of the Versatile and Farm King brands of equipment, and Claas, as well as an improvement in farmer sentiment and farm equipment purchasing plans and the Dallas Federal Reserve Bank reports weaker ag conditions in the fourth quarter of 2020.

According to the December Dealer Sentiment & Business Conditions Update, one-third of dealers reported their used equipment inventories “too low” in November. 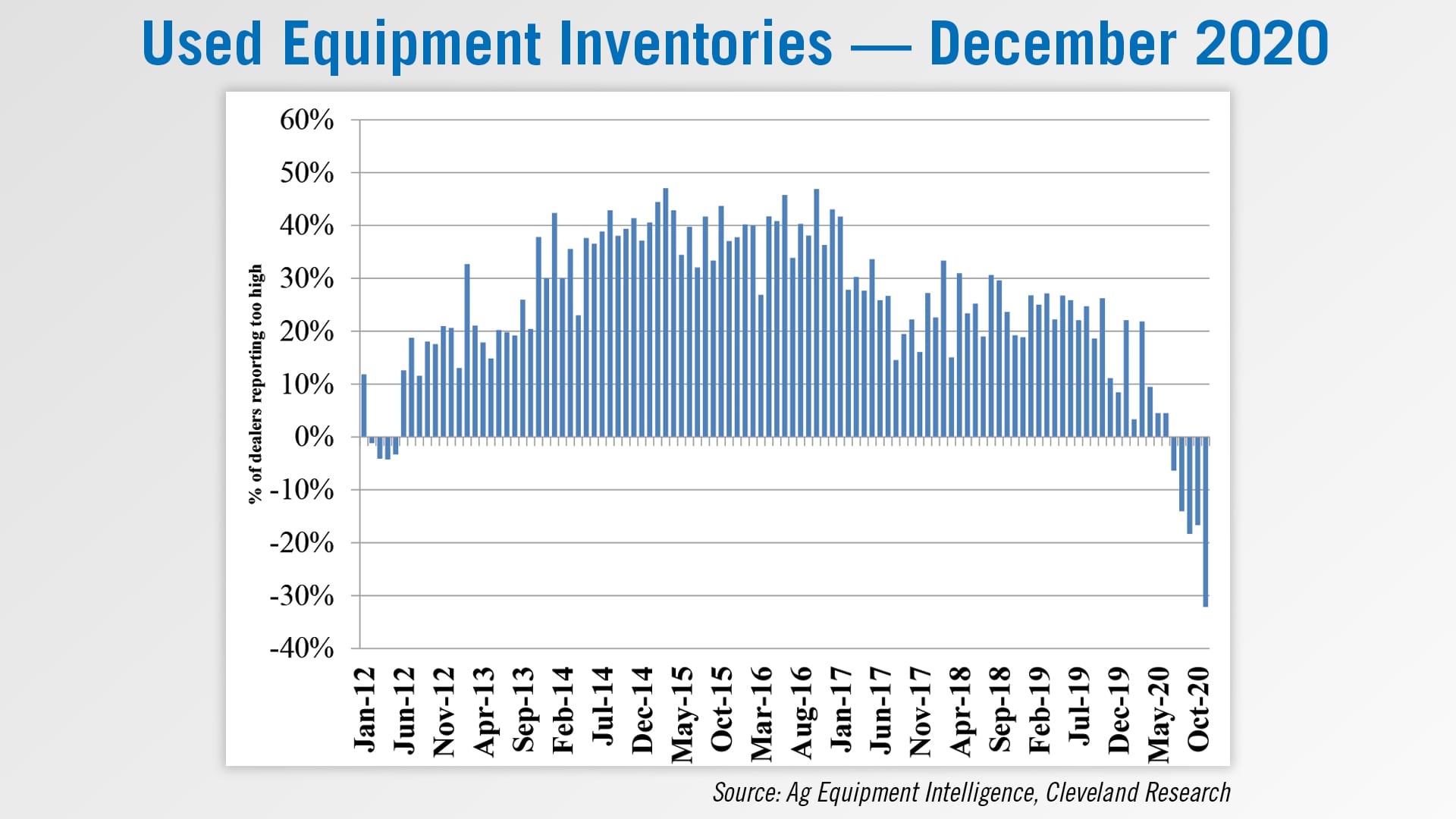 Dealers mentioned a trend toward an overall more positive outlook in the ag industry for 2021. One dealer in the Corn Belt reported an uptick in sales supported by government aid to farmers, despite the surge in COVID-19.

This week’s Dealers on the Move include Van Wall Equipment, H&R Agri-Power and Farmers Supply Co.

John Deere dealer Van Wall Equipment has added 6 more locations in Iowa with the purchase of Horizon Equipment. The dealership now has 31 stores across 4 states.

A week into the new year, one of the carryover lessons learned by precision dealers in 2020 was that they either need to learn how to disrupt the way they do business, or risk being disrupted.

Wrapped around this concept is the question of how dealers will help their customers be more profitable with where and when they invest in ag technology products and services.

According to Arlin Sorensen, founder of HTS Ag, it’s going to come down to a strategic business strategy focused on data-driven decision making. While not a new philosophy, Sorensen says ag dealers have historical context to draw from, especially from the IT industry.

The lifecycle of precision services mirrors that of the IT industry with Sorensen suggesting ag is about a decade behind, but trending in the same direction in terms of how delivery, charging and validation of service will be measured.

Sorensen says there could be as many as 200 different decision points growers will need to manage as farms get larger and more complex. This will breed opportunity for those dealership who are willing to be the disrupters, rather than the disrupted.You can hear more from Arlin on the evolution of precision partnerships at the 2021 Precision Farming Dealer Summit, Jan. 11-12. Visit PrecisionFarmingDealer.com for more information and to register.

According to Buhler’s earnings report for its fiscal year 2020, revenue was up year-over-year and 2021 sales are projected to increase. Buhler manufactures the Versatile and Farm King brands of ag equipment. 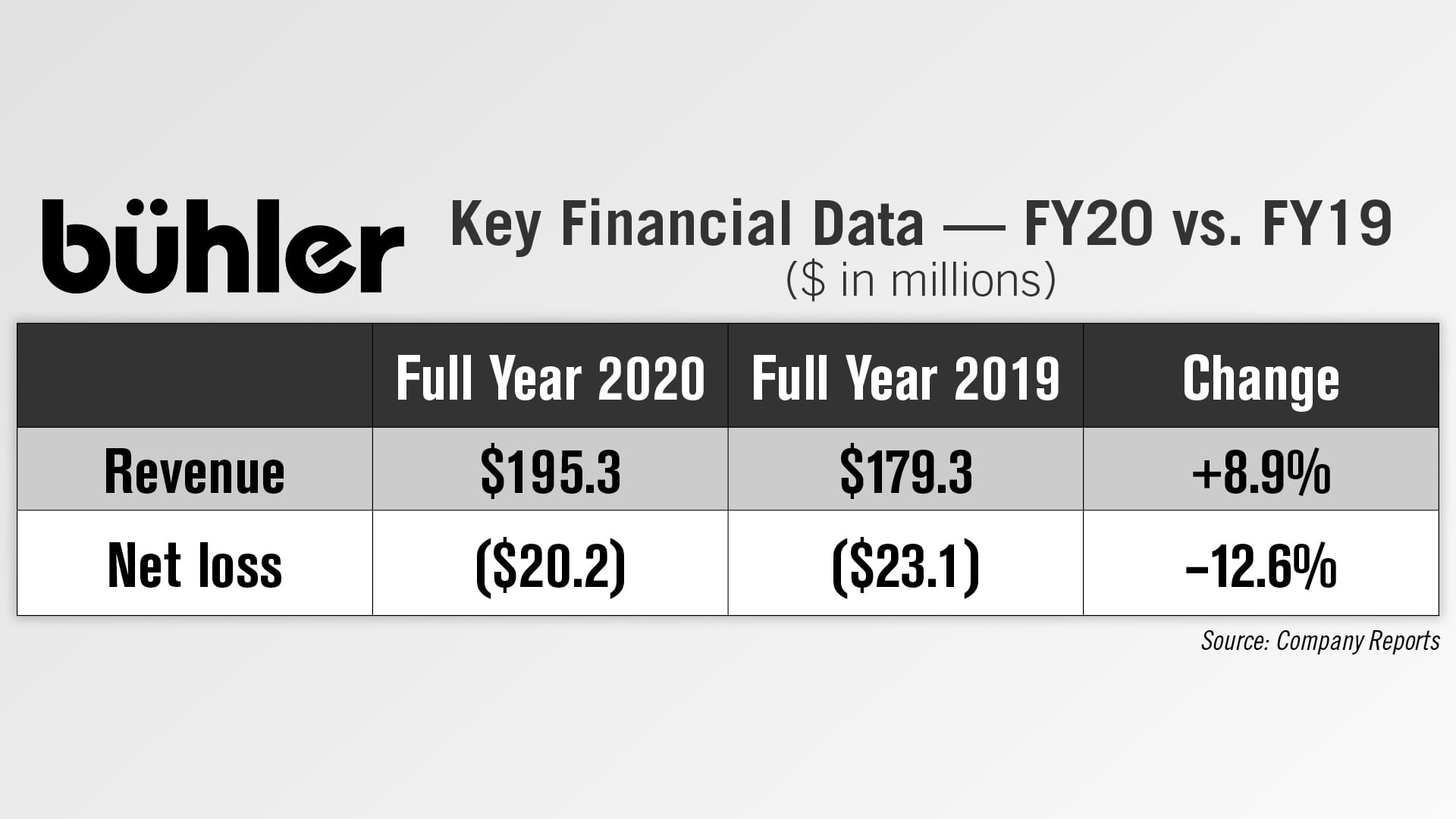 2020 revenues were $195 million, up 9% from $179 million in 2019. The company reported increased sales levels were a result of dealers reducing field inventory in the previous year, strong harvest conditions and crop yields. Sales to North America increased but were somewhat offset by sales in Eastern Europe and other international sales.

Net loss for the year was $20.2 million, an improvement of $2.9 million from the loss in the prior year. Buhler reported it was able to reduce interest expense by managing to reduce its inventory and accounts receivable, as well as reducing its R&D expenses.

The company expects continued sales growth heading into 2021 and reduced cost of operations fo llowing its reorganization of manufacturing operations.

According to its latest earnings report, the North American market gave Claas a shot in the arm to help drive the group to record revenues. 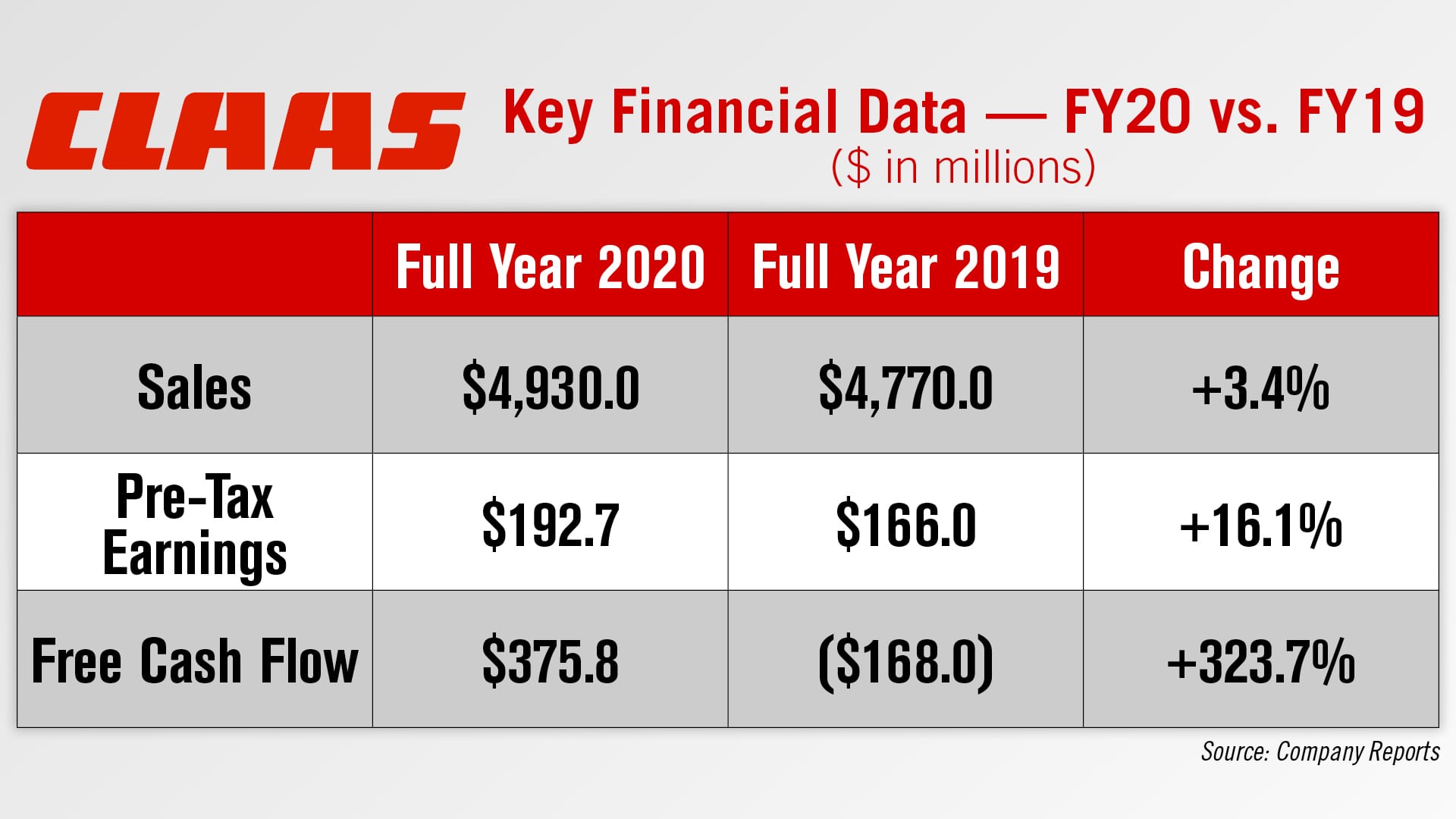 Thomas Böck, Chairman of the Board, said Claas achieved its strongest growth in sales outside Europe, with North America being the most important growth driver. Revenues from non-European markets increased by around 20% to more than $963 million, with the United States, Canada and China contributing the highest volumes. Claas said significant increases were generated in North America through sales of forage harvesters, combine harvesters and tractors. 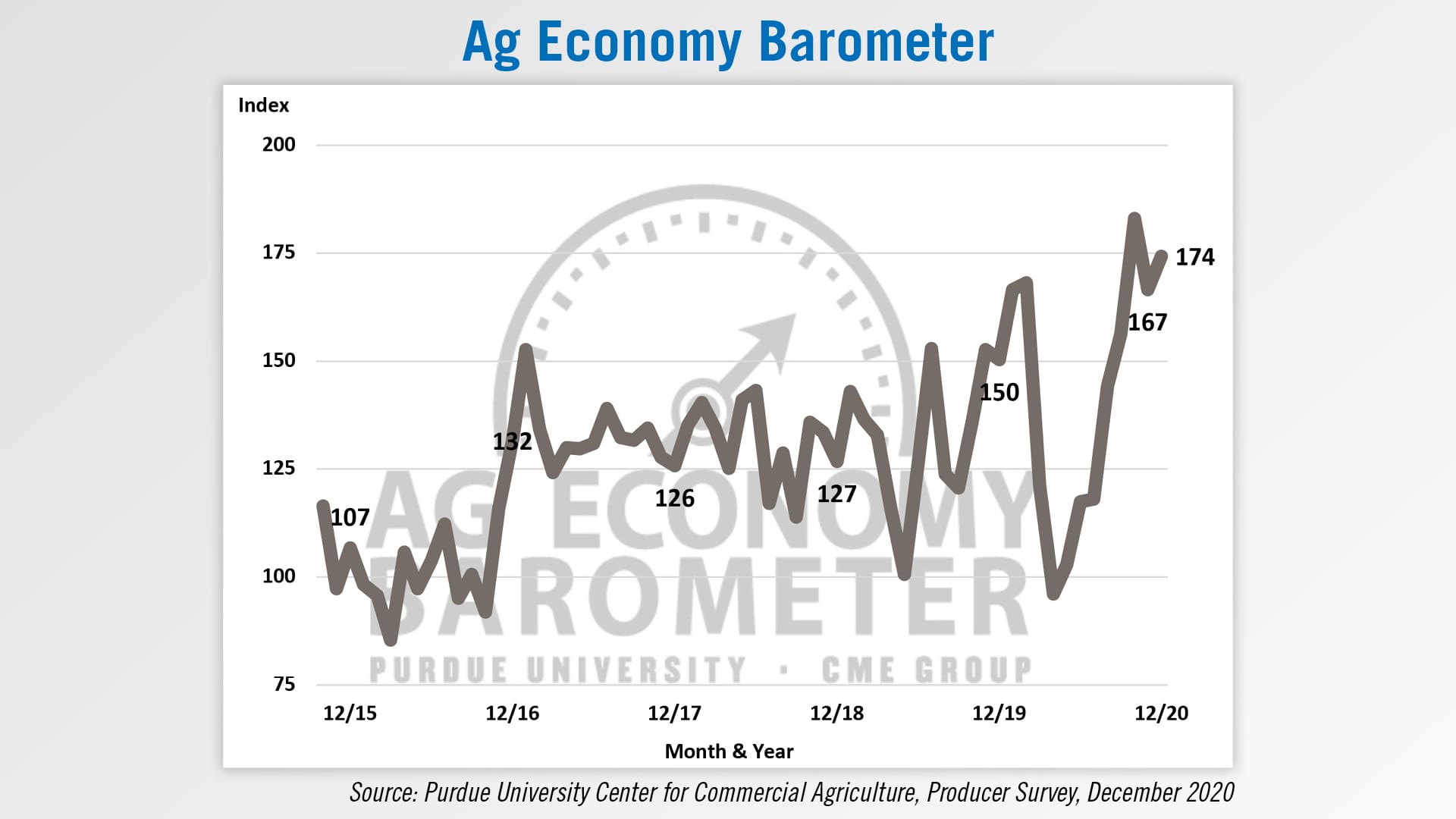 Both of the barometer’s sub-indices, the Index of Current Conditions and the Index of Future Expectations, were higher in December than in November although the current conditions improvement was three-times the size of the future expectations increase. 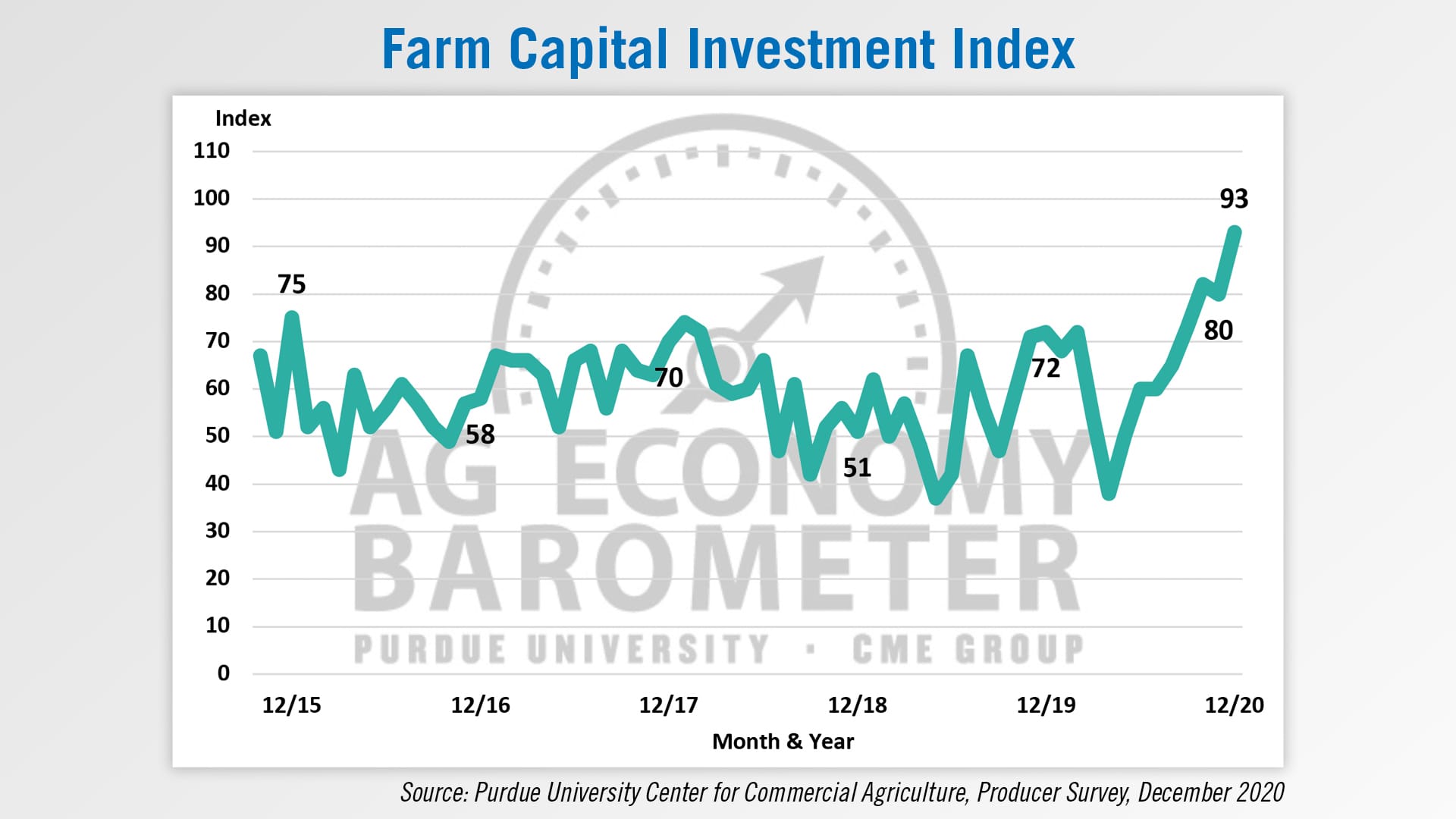 Producers were noticeably more positive about making large investments in their farming operations than in November. The Farm Capital Investment Index increased 13 points in December to a record high 93. The comparison is even more dramatic when compared to earlier in the year. December’s investment index reading was 28 points higher than back in August, when the crop price rally was just getting underway in earnest, and it is more than double the April reading of 38. 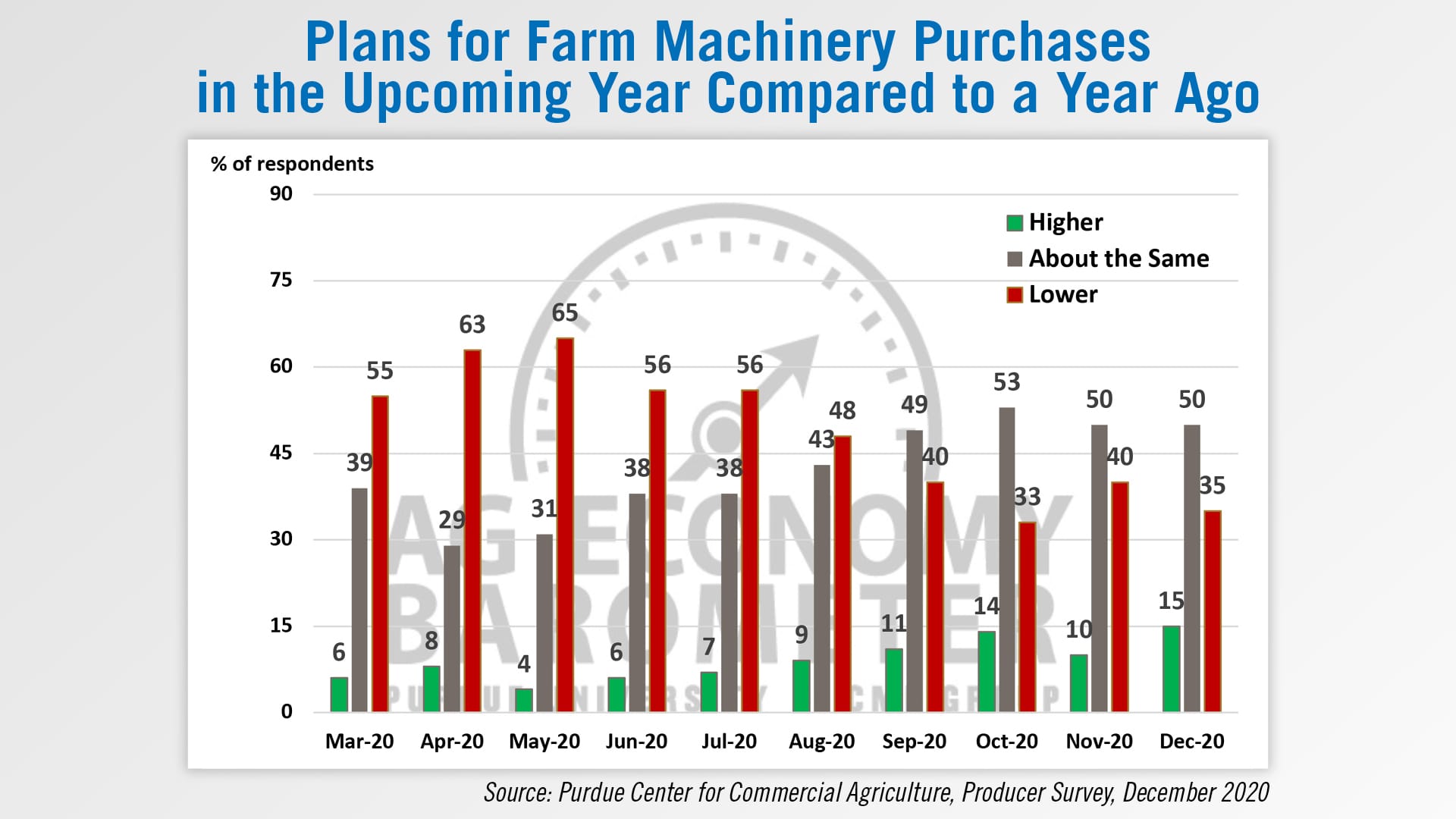 Bankers responding to the Dallas Fed’s fourth-quarter survey reported overall weaker conditions across most regions of the Eleventh District. They pointed to extreme drought conditions with crop yields below average in some regions. 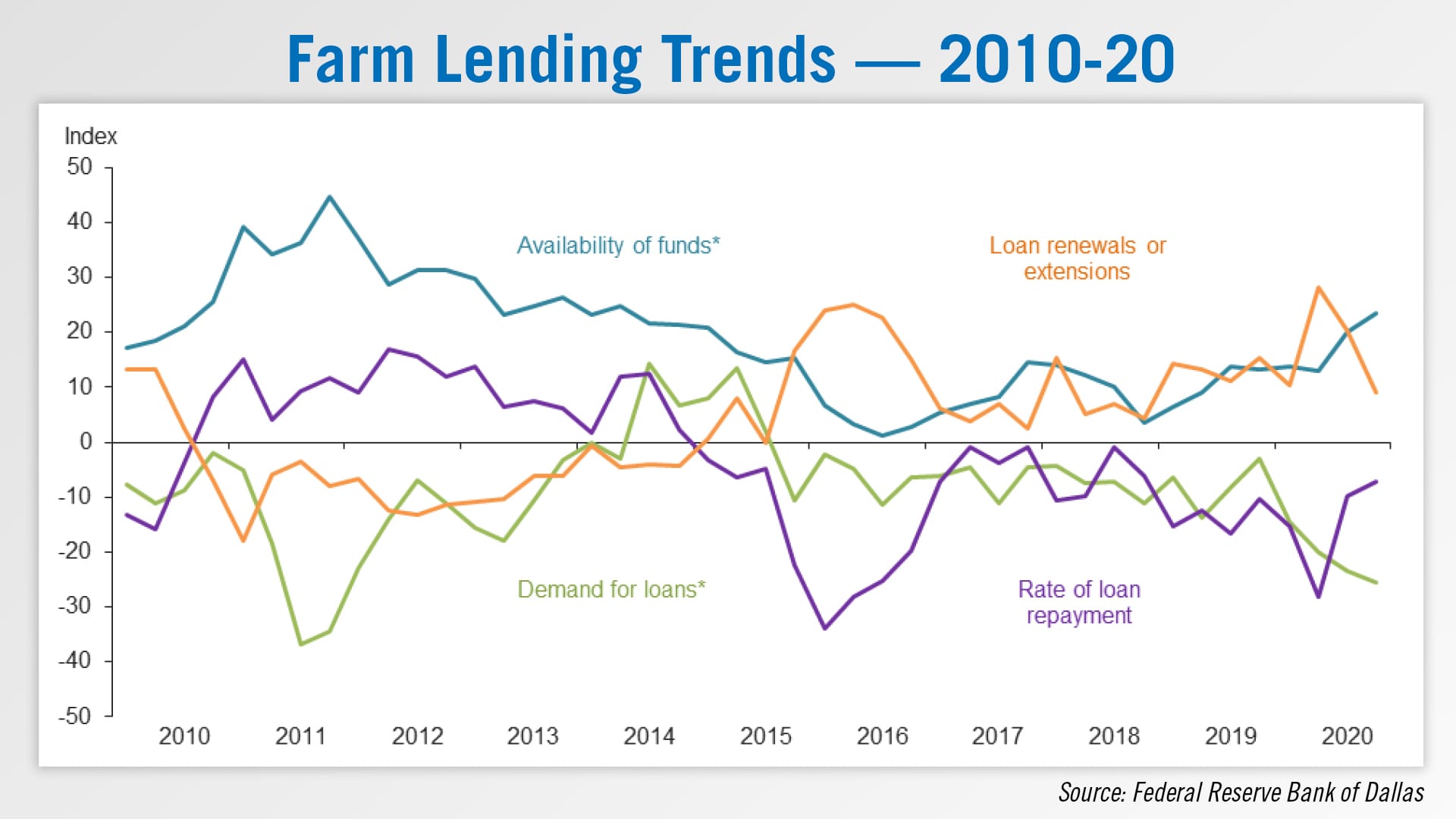 Demand for agricultural loans continued to decline, with the loan demand index registering its 21st quarter in negative territory and its lowest level since late 2011. Loan renewals or extensions increased this quarter, while the rate of loan repayment continued to decline. Loan volume decreased across all major categories compared with a year ago.

Some contacts noted government aid such as the Coronavirus Food Assistance Program has helped producers make their loan payments on time. Demand for agricultural land in some areas continues. However, bankers indicated the land is not for production agriculture but for investment and residential development.