The latest episode of On the Record is now available! In this week's episode we discuss some of the preliminary results of the 2021 Rural Lifestyle Dealer Business Trends & Outlook survey, which shows dealers in this segment optimistic for the year ahead. In the Technology Corner, Jack Zemlicka discusses one dealer's predictiation that farmers will start to expect 24/7 service and problem solving from their dealers. Also in this episode, ag lending conditions recover in the third quarter, net cash farm income sees a boost, CEMA reports European dealer sentiment is improving and a look at the top 5 European speciality equipment manufacturers based on 2019 revenues.

For Bellota, the key to quality in their planting and tillage parts is the perfect balance between hardness and toughness that is attributed to the 8 million product units they produce every year.

Bellota - a growing brand of Agrisolutions.

The results of the 2021 Rural Lifestyle Dealer Business Trends & Outlook survey show dealers remain positive in the outlook for revenue growth from the rural lifestyle and lawncare segments. 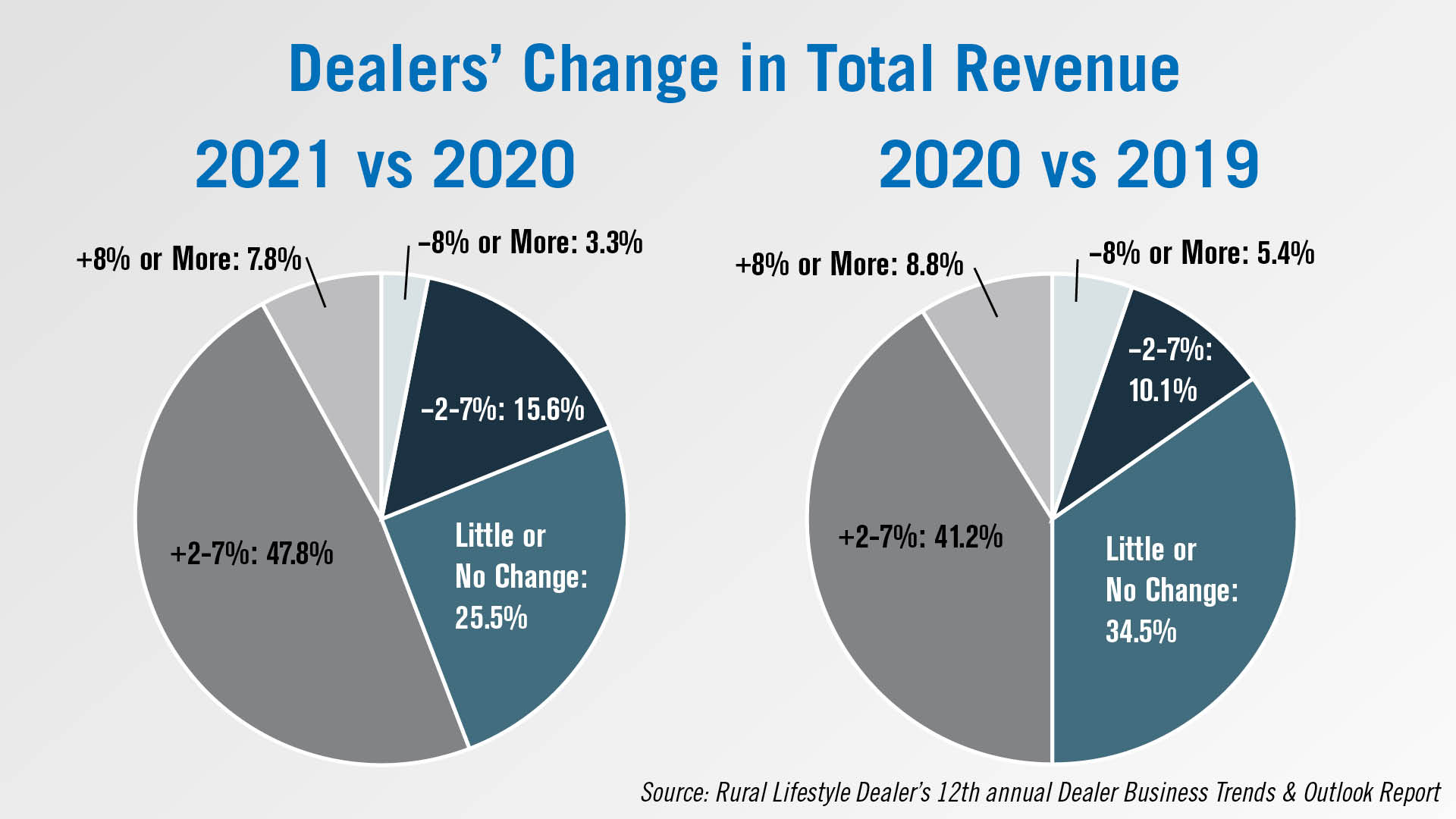 The percentage of dealers forecasting flat sales in 2021 was down by about 10 percentage points from the 2020 forecast.

Rural lifestyle dealers are also optimistic about their aftermarket revenue opportunities for revenue coming from rural lifestyle and lawn/landscape customers. 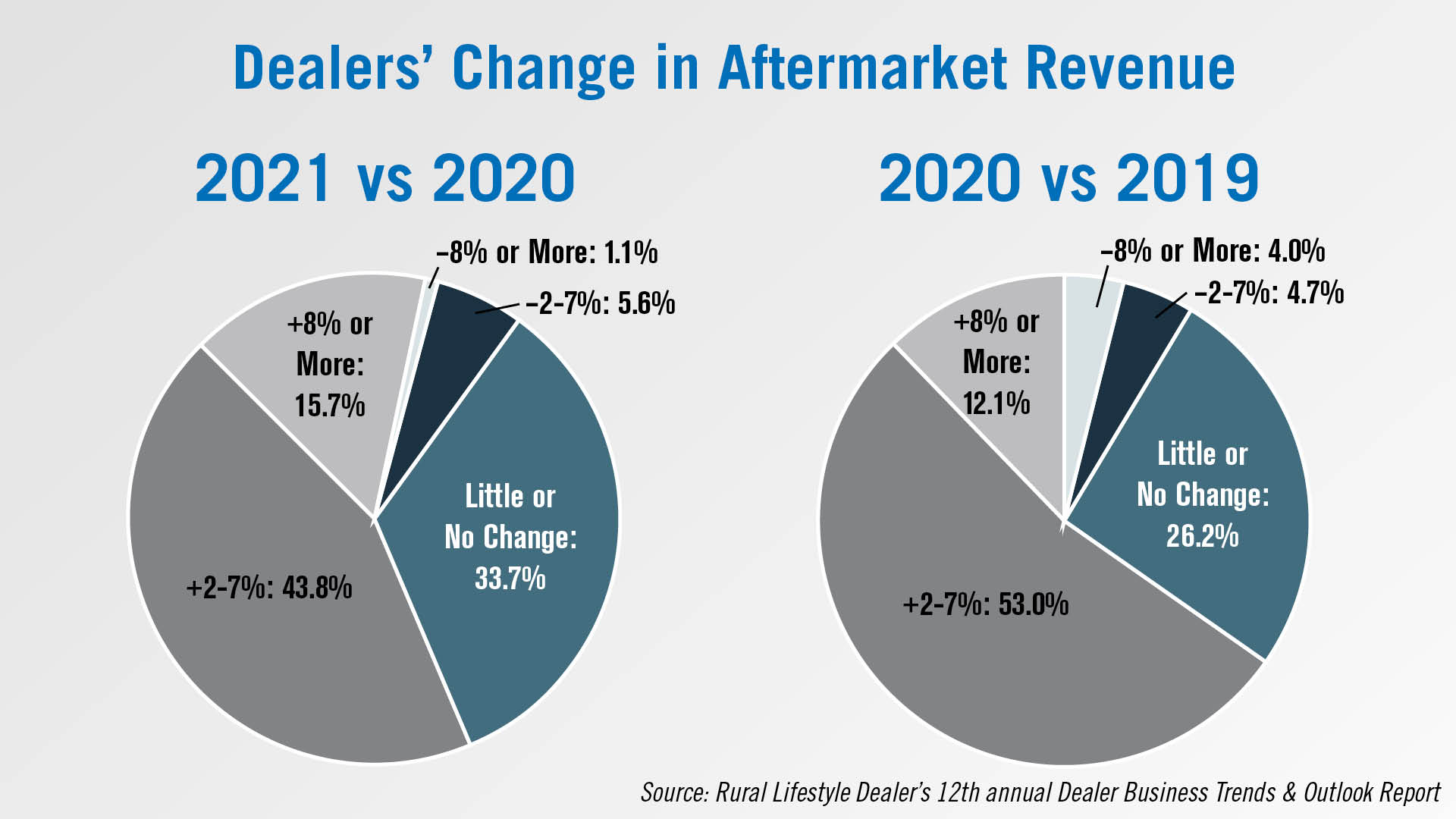 For 2021, nearly 60% of dealers forecast their aftermarket revenues to be up at least 2%. That is down from 65% forecasting the same level of growth in 2020.

In 2020, compact and utility tractors and outdoor power equipment and UTVs saw an uptick in sales as people were home due to COVID-19. While we now have a vaccine, distribution won’t be widespread for some time, leaving some to say we may continue to see the uptick in sales. One dealer comments, “COVID-19 is not going away in the short term, 2021 people will still spend their money on mowers and compact tractors. The travel industry is going to be slow, it is going to be a long recovery for them. Vacations have become new cars, trucks, mowers and tractors. People will spend their earnings at home.’

A complete analysis of the results will be published in the February issue of Farm Equipment magazine and on RuralLifestyleDealer.com.

With farmers placing more emphasis on getting more economic return on investment from their technology and equipment, they will also increase service expectations, says Kevin Depies, manager with Ritchie Implement, a 4-store Case IH dealership in Wisconsin.

Working with a good volume of dairy customers, Depies says their operational habits and methods will likely gain traction with row-crop farmers, in terms of needing equipment to be continuously operational as it becomes more automated.

Robotic milkers have been around for about 10 years and Depies says it’s common for farmers to come into their stores for parts, while their cows are being milked back on the farm.

Customers might get a text on their phone that milker number 3 has an issue. Most of them don’t rush off to the parlor, Depies says. They call the company that sold and services the equipment and lets them know about the problem.

Time of day is irrelevant, and he’s talked to a few of his dairy customers who have gotten notifications after midnight of a piece of equipment that is down and they will call their dairy equipment dealer to come out at 4 or 5 a.m. to check it.

He sees the same type of model coming to the ag equipment dealer where someone will be expected to be available 24/7 to solve a problem, especially if it’s an automated piece of equipment that is expected to cover ‘X’ number of acres in ‘X’ amount of time.

“I really think that bar and that expectation is going to keep going up and we’re going to have to get into a 24-7 support base operation because as we get into automation, I don’t see the ability to be automated with the large scale or equipment we have today. But I also don’t see it being micro-machinery. Maybe it will be 12-row equipment instead of 24-row. But it’s going to run around the clock.”

He adds that this type of service will be a necessity when it comes to in-season support for customers to ensure uptime in the field.

Farm loan demand moderated in all Federal Reserve districts for the first time since 2013 in the third quarter. Although a majority of bankers in the Dallas District have reported lower lending activity since 2016, the third quarter was the first time in 7 years that bankers reported a decline in the credit needs of farm borrowers in all districts. 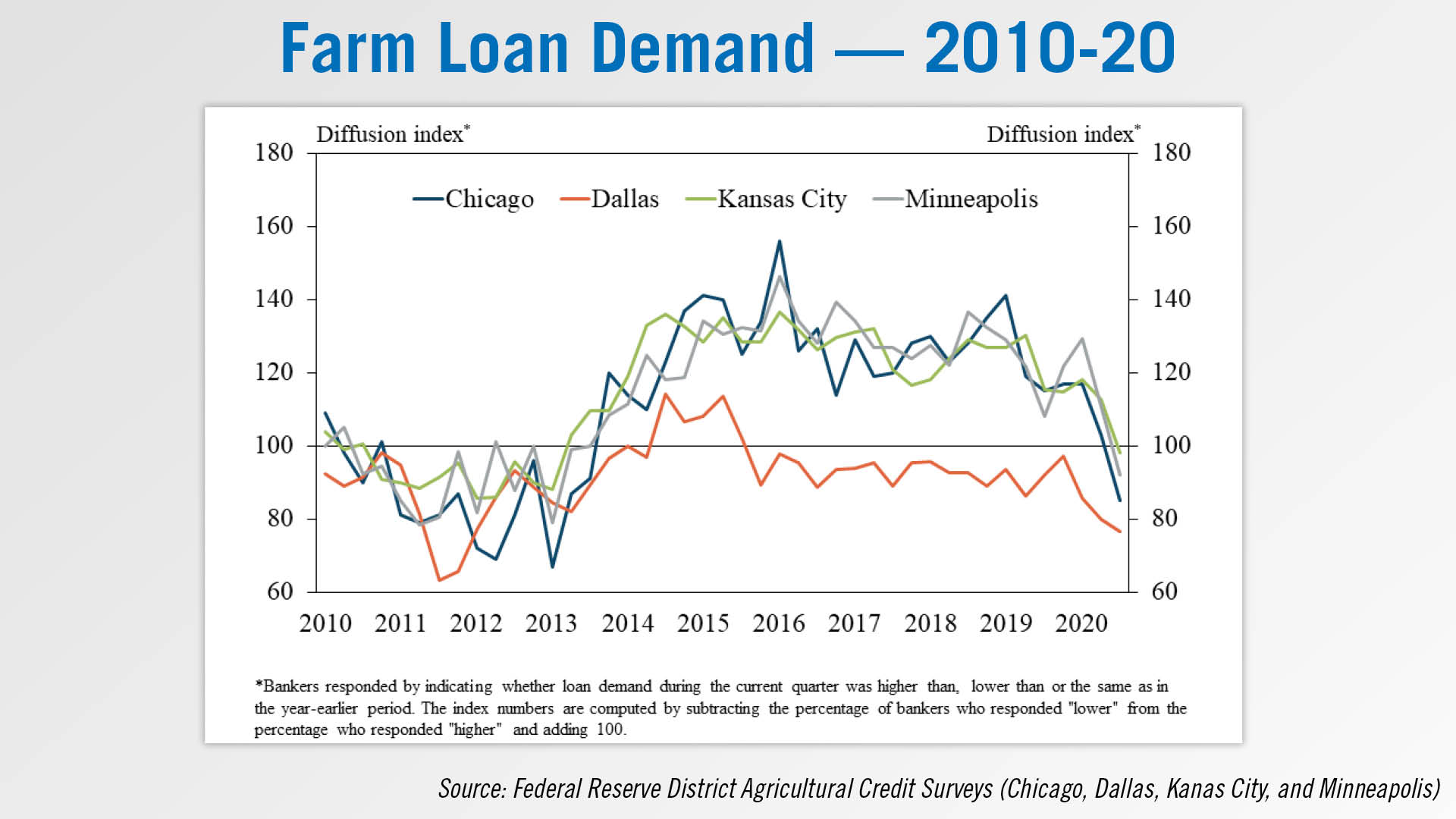 Alongside reduced lending activity, agricultural credit conditions improved somewhat in the third quarter. Although most bankers continued to report that farm income and repayments rates were lower than a year ago, the pace of decline slowed in all districts. Compared to last year, farm finances seemed to stabilize the most in the Chicago and Minneapolis districts, where corn and soybeans make up a larger share of farm revenues. 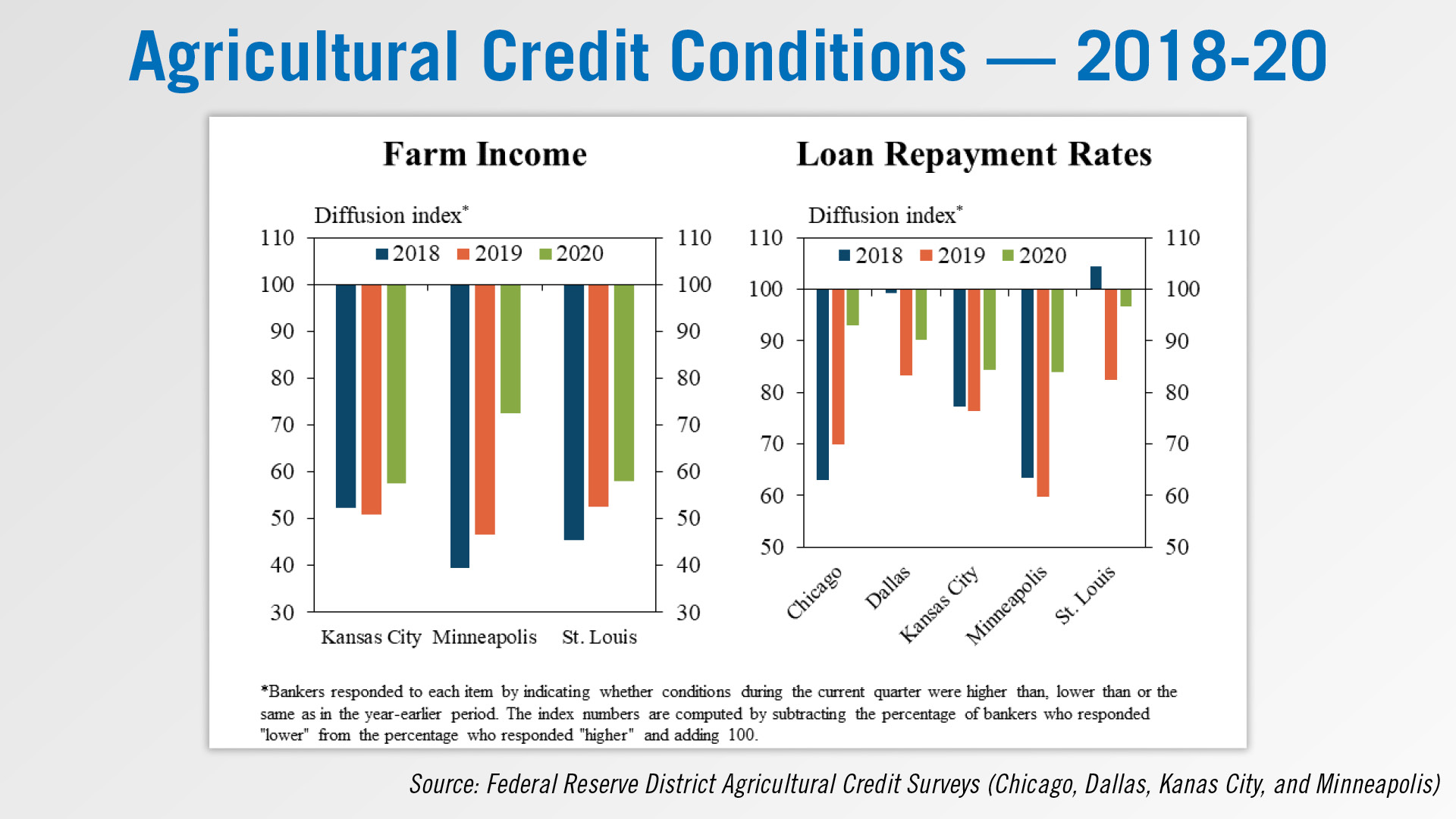 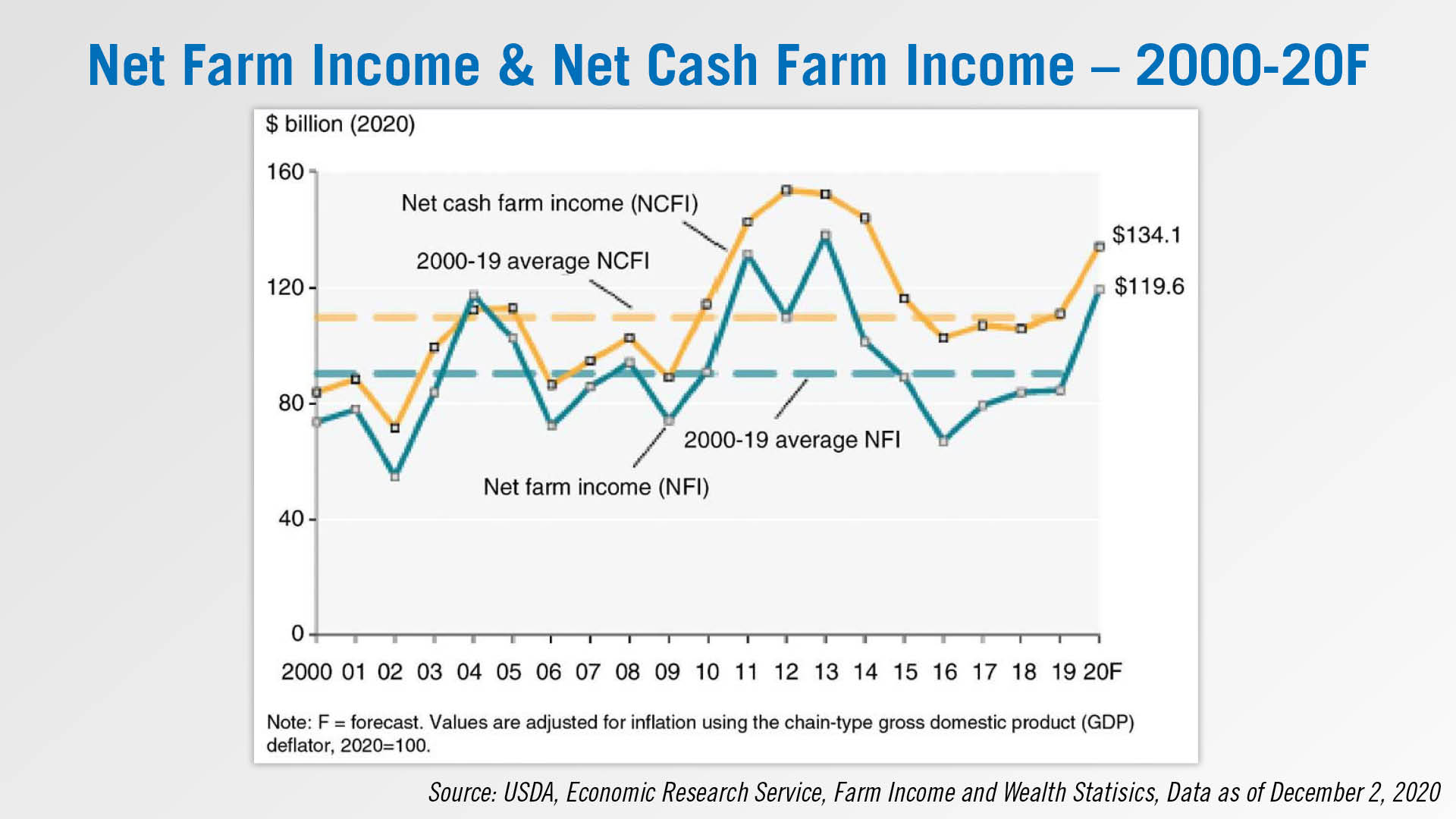 While cash receipts for farm commodities are forecast to fall 2.1% in 2020, direct Government payments are expected to rise to $46.5 billion, more than twice the 2019 amount, a result of payments for COVID-19 relief. Total production expenses are projected to fall 2.7% in 2020. 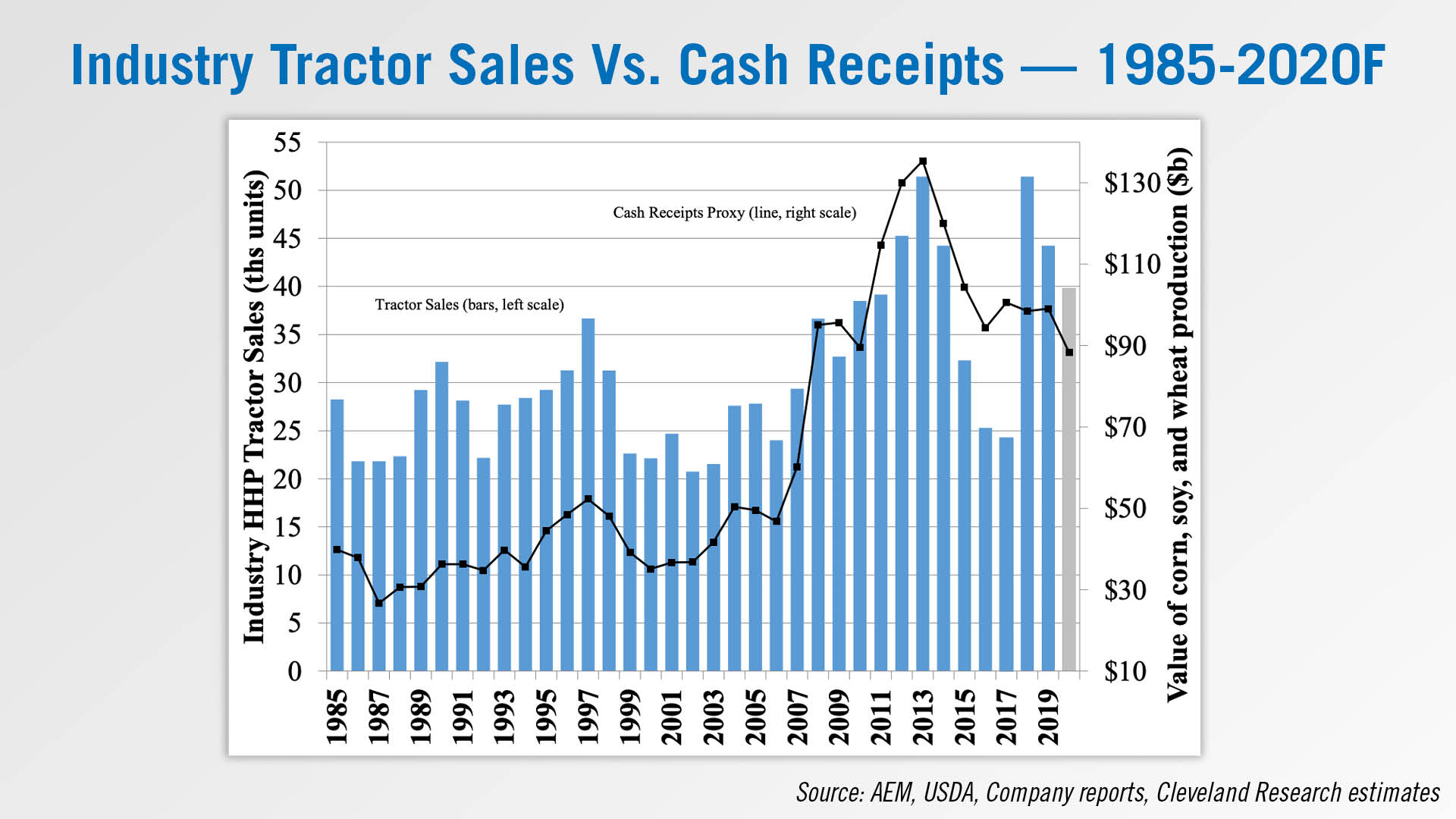 The value of U.S. crop production and sales of high horsepower tractors have historically had a positive relationship. Data from the November Dealer Sentiments & Business Conditions Update shows this connection was particularly noticable between 2010-14, which included record highs for both high horsepower tractor sales and cash receipts in 2013.

According to the European Agricultural Machinery Assn., European dealer sentiment increased in December for the eighth month in a row. 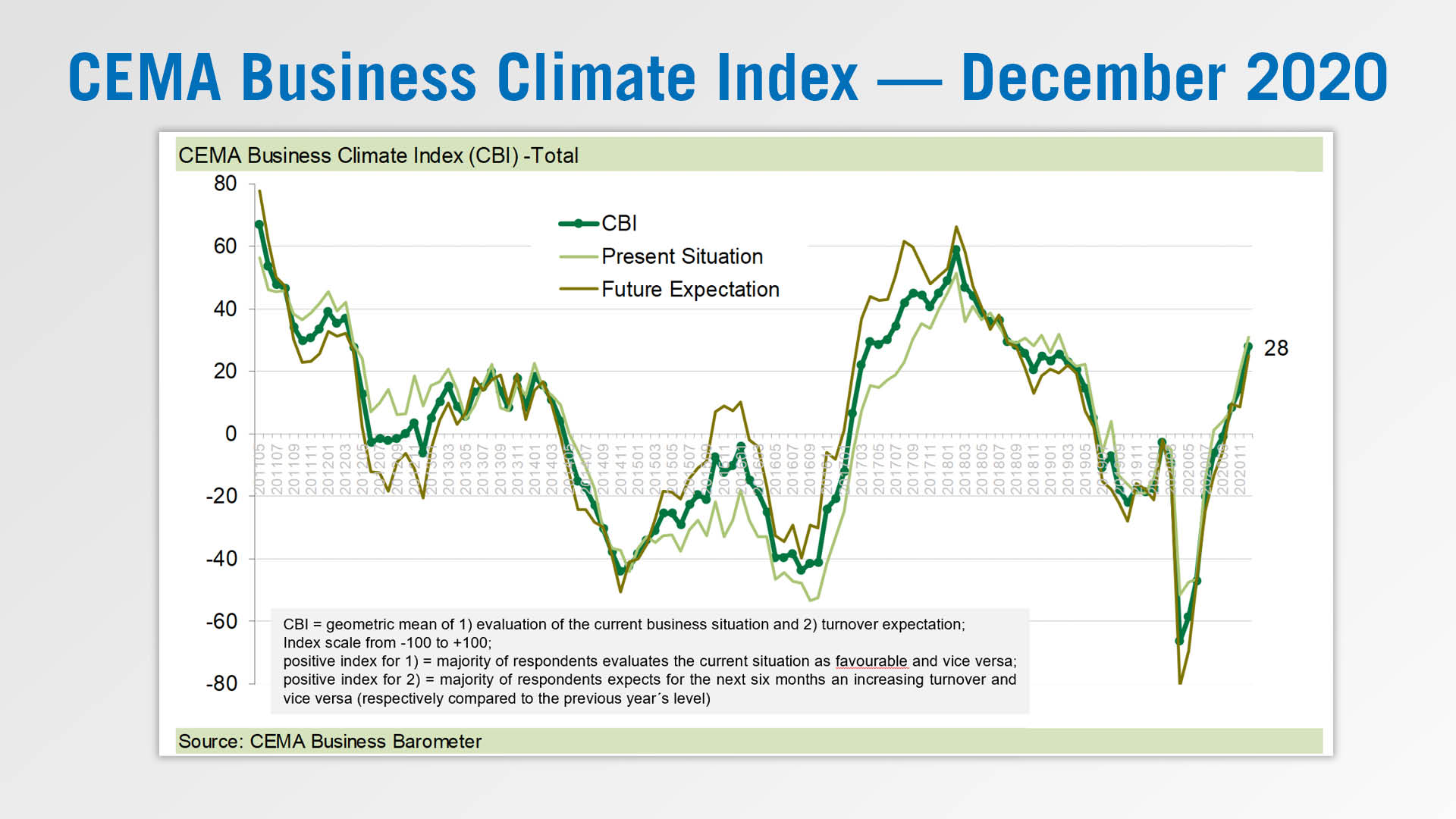 The association’s Business Climate Index has continued to rise after achieving a positive measurement in October for the first time since mid-2019. As of December, the index sits at 28 compared to a reading of 14 in November.

Looking ahead to 2021, it was reported that industry representatives are forecasting average turnover increases of 4%. The momentum for this increase is expected to come from Western Europe, North America and Oceania.

According to a recent report from Ag Equipment Intelligence, Kuhn Group has reported the highest 2019 sales among European shortline manufacturers. It was reported that a series of strategic acquisitions in Europe, the U.S. and South America helped boost Kuhn to the top of the list, where they reported $1.32 billion in 2019 sales. 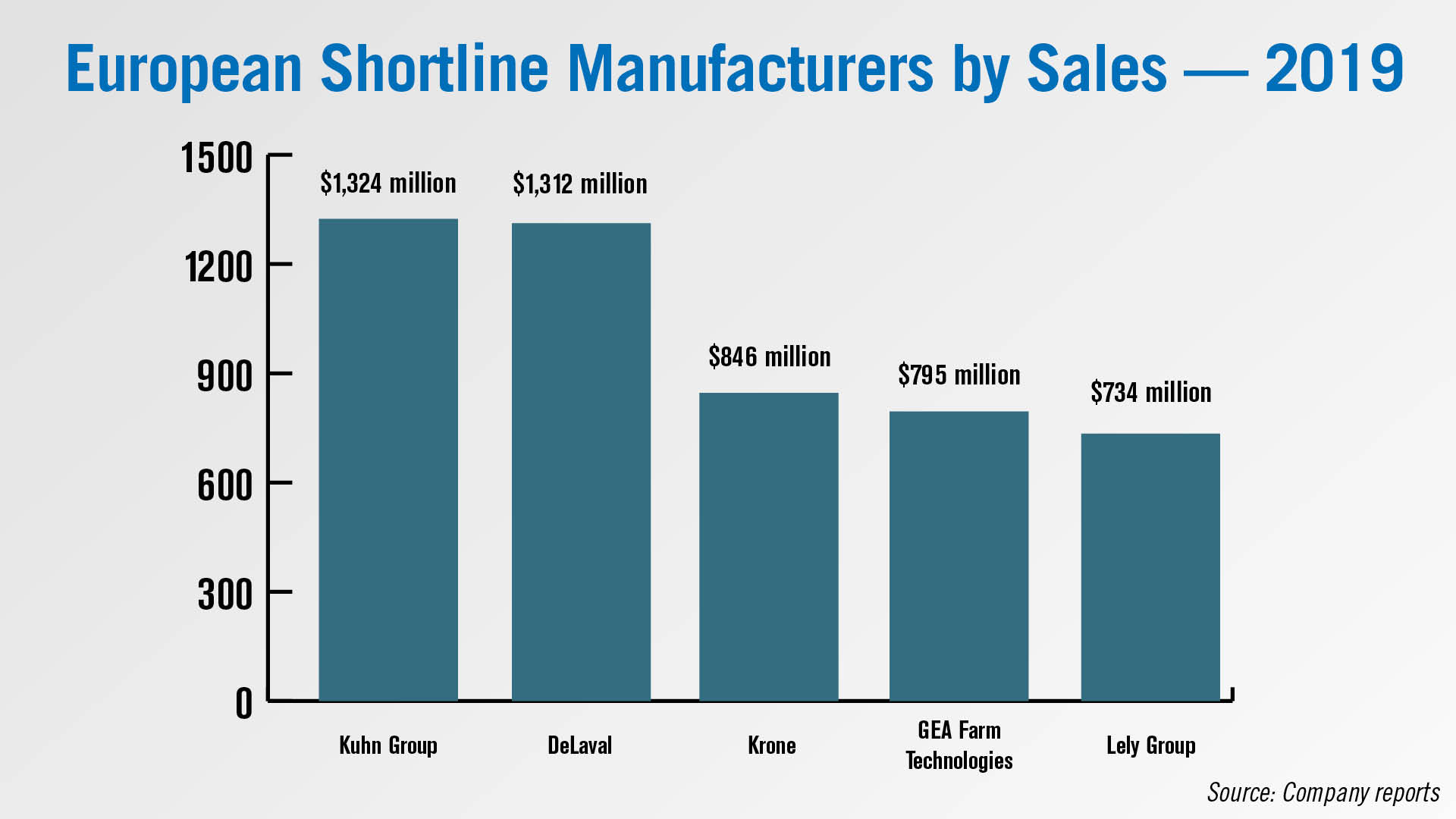 The Kuhn Group’s acquisitions have brought manufacturing facilities and new product lines into its portfolio. These include tillage, seeding and livestock equipment in the U.S., sprayer manufacturers in France and Brazil, and big balers acquired from Kverneland.

DeLaval came in second at $1.3 billion in 2019 sales, with 38% of its revenues coming from milking systems. Krone followed in third with a record $846 million in sales, boosted by demand for high-capacity forage harvesting machinery in North America.

GEA Farm Technologies claimed the fourth highest 2019 sales at $795 million, and Lely Group followed in fifth with $734 million in sales, both of which focus on dairy equipment.