By Joe Mahon, Director, Regional Outreach at the Federal Reserve Bank of Minneapolis

After multiple years of tough financial conditions for agriculture, COVID-19 might have been expected to deal another major blow to the sector. But pandemic-relief aid along with mostly bountiful harvests in the Ninth District and a slight recovery in prices have painted an optimistic picture for the end of 2020, according to the Federal Reserve Bank of Minneapolis’ third-quarter (October) agricultural credit conditions survey. “Increasing farm commodity prices and COVID-related government programs have most farmers sitting OK,” reported a Wisconsin agricultural banker responding to the survey.

Farm incomes fell from July-September 2020 relative to the same period a year earlier, according to lenders surveyed. Spending on capital equipment and farm household purchases also decreased. Loan demand fell slightly, while falling incomes pushed the rate of loan repayment down, and renewals and extensions increased. Land values increased slightly across district states, and interest rates on loans decreased further from the previous quarter. However, the outlook for the fourth quarter is more optimistic, with lenders in the district generally expecting farm incomes to increase.

In contrast to recent surveys in which strong majorities of bankers reported decreased farm incomes, half of district lenders surveyed in the third quarter said incomes were unchanged from a year earlier, compared with 39% who reported that incomes decreased. The same percentage reported that household spending fell, while 5% said it increased. Farms also spent less on buildings and equipment — 58% of lenders reported decreased capital spending, and only 2% said it increased.

The rate of repayment on agricultural loans largely held steady, reflecting the mild improvement in farm finances, while renewals increased somewhat. Loan repayments were unchanged from a year earlier, according to 71% of respondents, while 23% reported that repayment rates decreased. A third of lenders stated that the number of renewals or extensions increased, while most of the remainder said renewal activity was unchanged. Only 6% reported decreased renewals. No banks reported having refused a loan due to a shortage of funds.

Demand for loans decreased slightly on balance, according to lenders. While nearly two-thirds of respondents indicated that loan demand was unchanged from a year ago, 23% noted increased loan demand. This result also pointed to some improvement in farm finances and stood in contrast to recent surveys, in which larger shares of lenders were reporting increased or unchanged loan demand. Collateral requirements on loans have held steady, according to 85% of lenders surveyed, with the balance reporting increases in collateral requirements.

Fixed and variable interest rates for operating, machinery and real estate loans all decreased from the previous quarter.

The recent trend of declining farmland values appeared to have halted in the third quarter. The average value for non-irrigated cropland in the district increased by 3% from a year earlier, according to survey respondents. Irrigated land values rose by slightly less than 3%, while ranch- and pastureland values were unchanged on average.

“Recent rally in the grain market combined with more government support program money should make for a good last quarter in 2020 for farm incomes,” said a Minnesota banker in a survey comment.

The outlook among many other respondents was similarly upbeat about agricultural incomes, but the overall outlook for farm finances was more modest. Across the district, a third of lenders expected farm income to increase in the fourth quarter, compared with just under a quarter who expected further decline. The forecast for capital spending was more moderate, with 31% of respondents expecting decreases, compared with 24% who expected increases. Two-thirds of lenders thought farm household spending would remain unchanged.

Nearly half of respondents projected demand for loans to remain unchanged in the final three months of 2020, while 37% expected increased loan demand. About a fifth of bankers expected loan repayment rates to decline, and 31% forecast increased renewals and extensions. A strong majority expected no change in the amount of required collateral on loans. 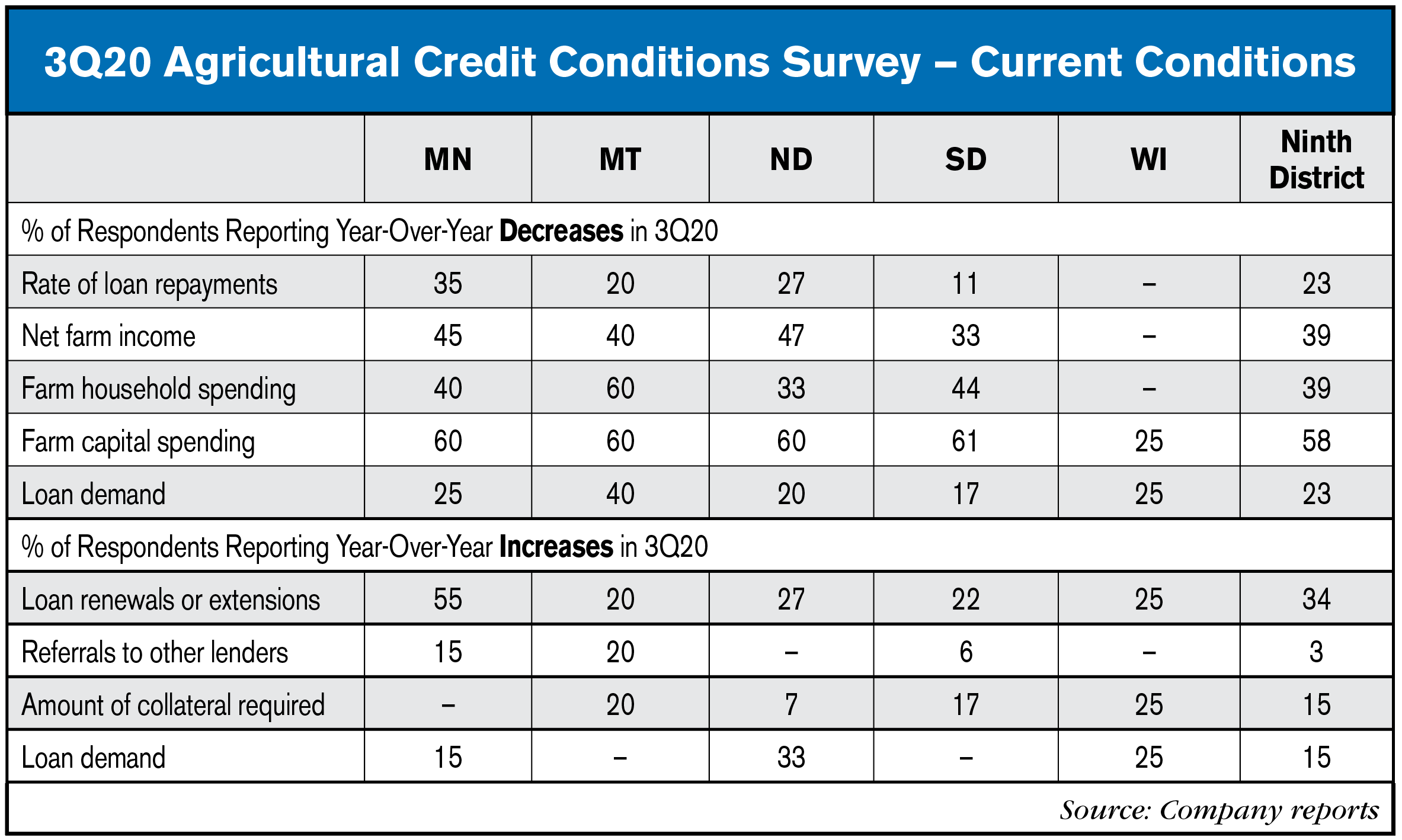 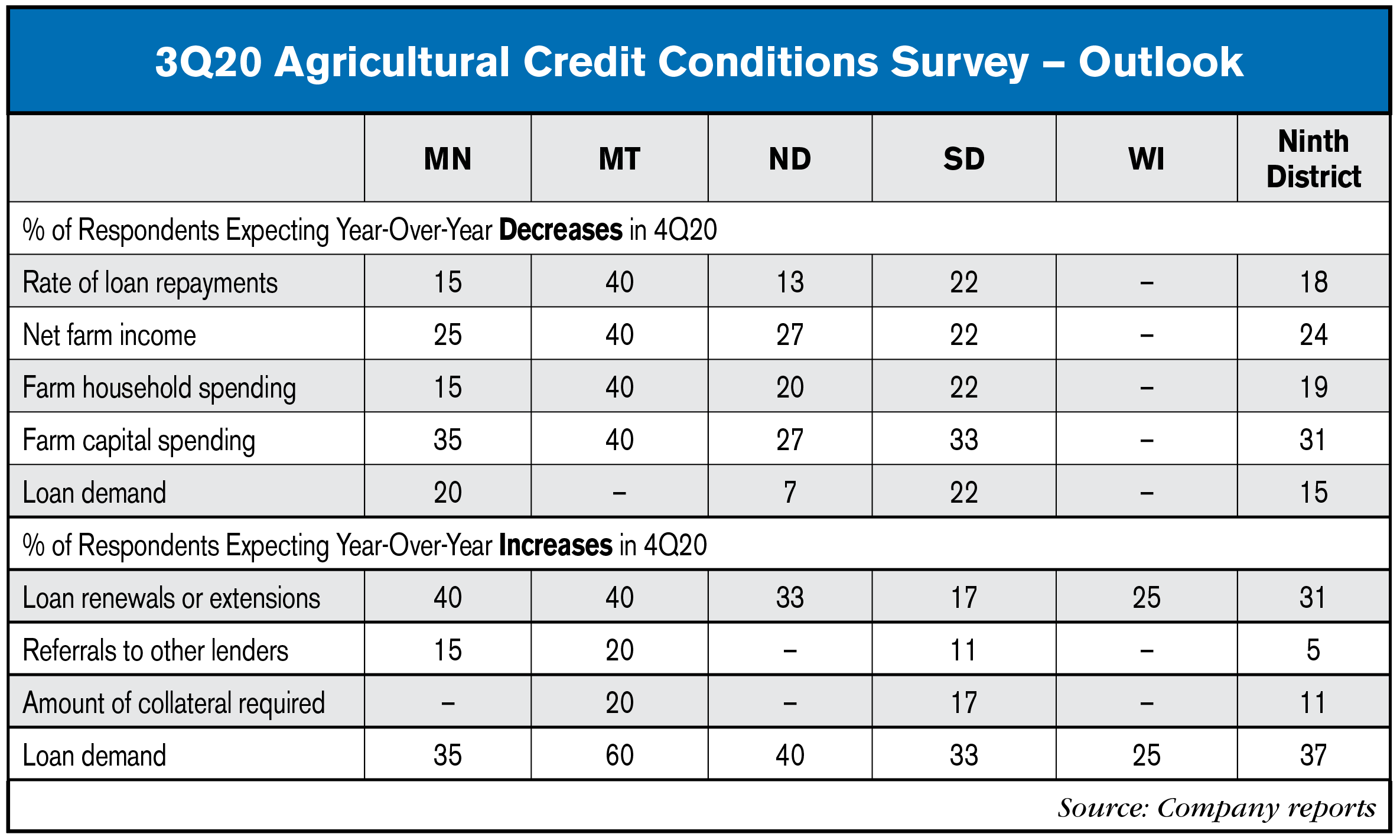