The outlook for agricultural credit conditions in the Tenth District improved in the third quarter alongside increases in commodity prices and the announcement of additional government aid. After dropping sharply in the second quarter due to disruptions associated with the COVID-19 pandemic, the prices of most agricultural commodities began to recover in the summer months. Strengthening demand supported additional increases in crops prices through the third quarter and into October, expanding profit opportunities for many producers heading into harvest. As a result, credit conditions deteriorated at a notably slower pace and the share of bankers reporting declines in farm income and loan repayment rates dropped from the previous quarter.

A sharp decline in farm income in the previous quarter abated somewhat in the third quarter. Increases in prices for the region’s major commodities late in the third quarter, in addition to direct government payments, supported farm incomes in the Tenth District (Chart 1). About 55% of agricultural bankers throughout the District reported lower incomes than a year ago, compared with 75% in the second quarter. Recent developments also led to more optimistic expectations about changes in farm income through the end of the year. 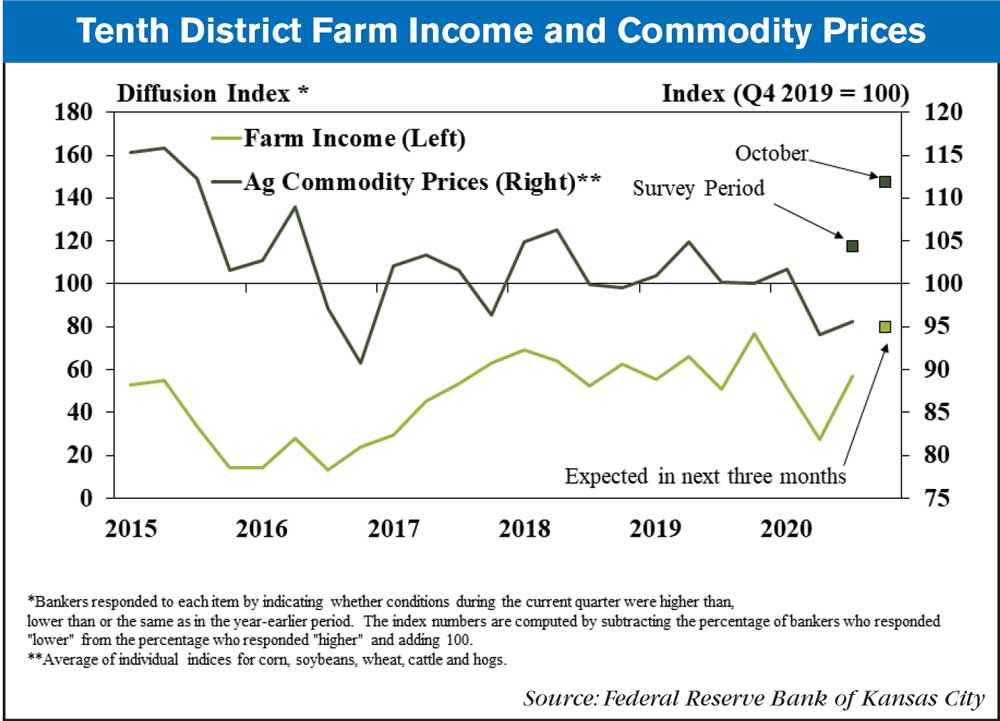 The slower decline in income was consistent across all states in the District while prospects for farm borrower liquidity also improved from the previous quarter. The pace of decline in income and liquidity was slower than the previous quarter in all states (Chart 2). The sharp deterioration in farm finances in the second quarter subsided most notably in Kansas and Oklahoma. The financial outlook for producers was most optimistic in western Missouri, where 40% of respondents indicated they expected liquidity would be higher than the same time a year ago and 50% expected farm incomes to be higher. 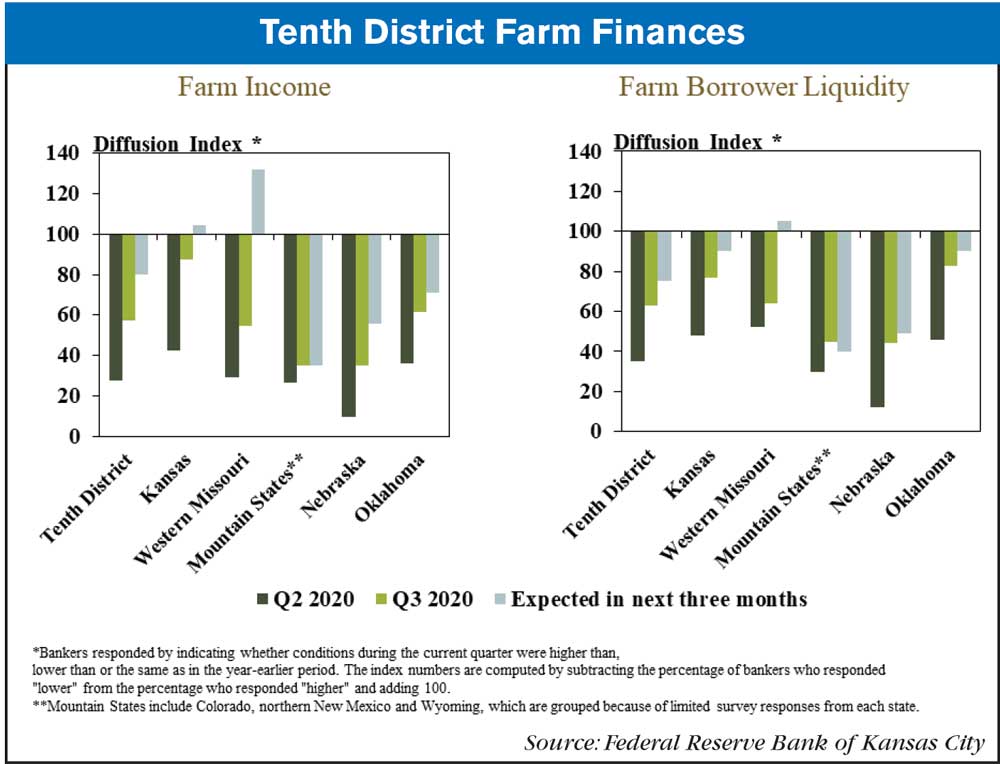 Following years of steady growth, demand for farm loans appeared to soften. About 25% of bankers reported that loan demand was lower than a year ago, the highest share since 2013 (Chart 3). The third quarter also was the first time more bankers reported a decline in loan demand than an increase since 2013. Alongside flat loan demand, the availability of funding increased for the fourth consecutive quarter. Looking forward, increases in funding were expected to continue, but loan demand was expected to rebound. 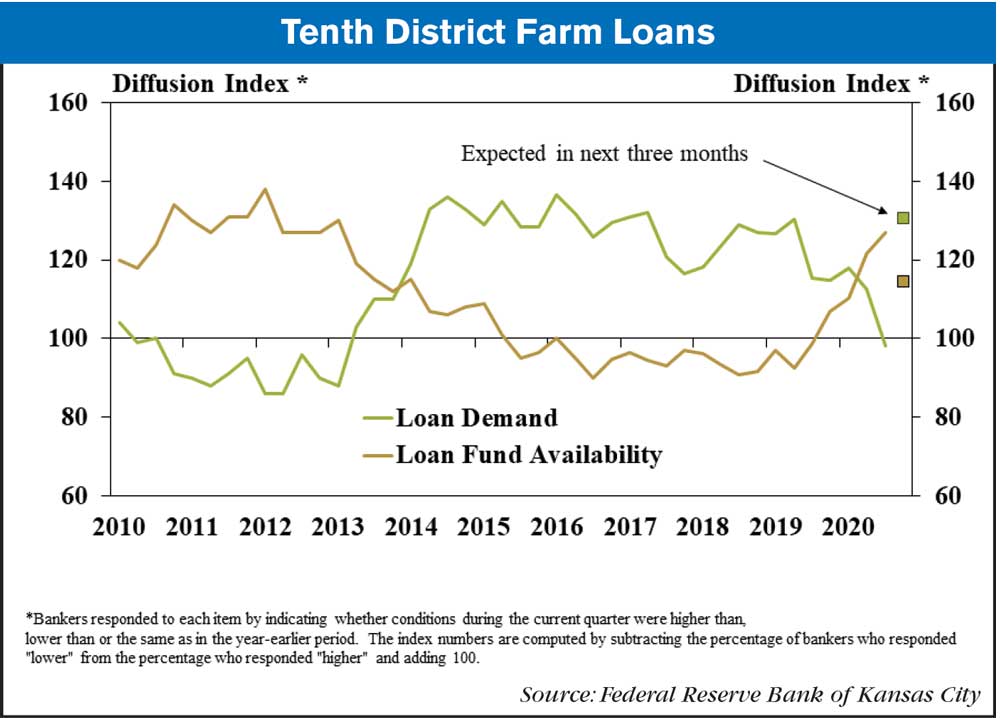 Alongside a better outlook for farm income in 2020, most measures of credit conditions also deteriorated at a more gradual pace in the third quarter. About 20% of respondents reported a decline in loan repayment rates, compared with about 35% in the previous two quarters and 30% the same time a year ago (Chart 4). Repayment challenges were expected to ease across all types of farm operations in the next three months and improve slightly among row crop farmers and cattle producers. 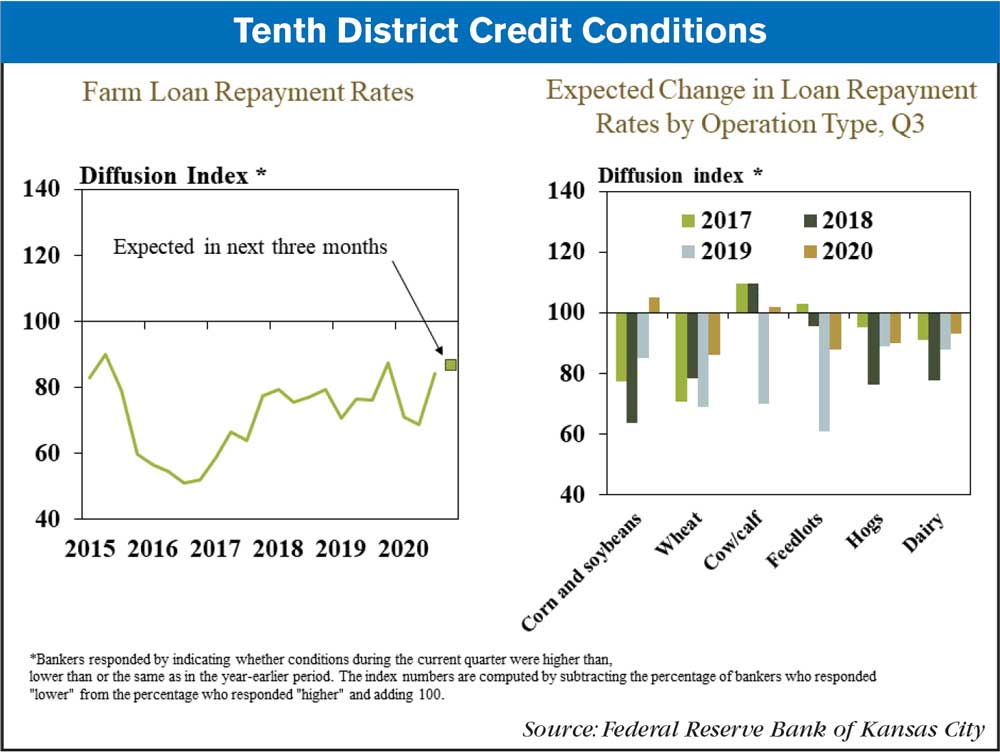 Weakness in repayment rates also moderated across states in the District’s farm economy. The pace of decline in farm loan repayment rates slowed in all states, and was most noticeable in Kansas (Chart 5). Expectations about the coming months also were more optimistic than in recent quarters, particularly among bankers in western Missouri. 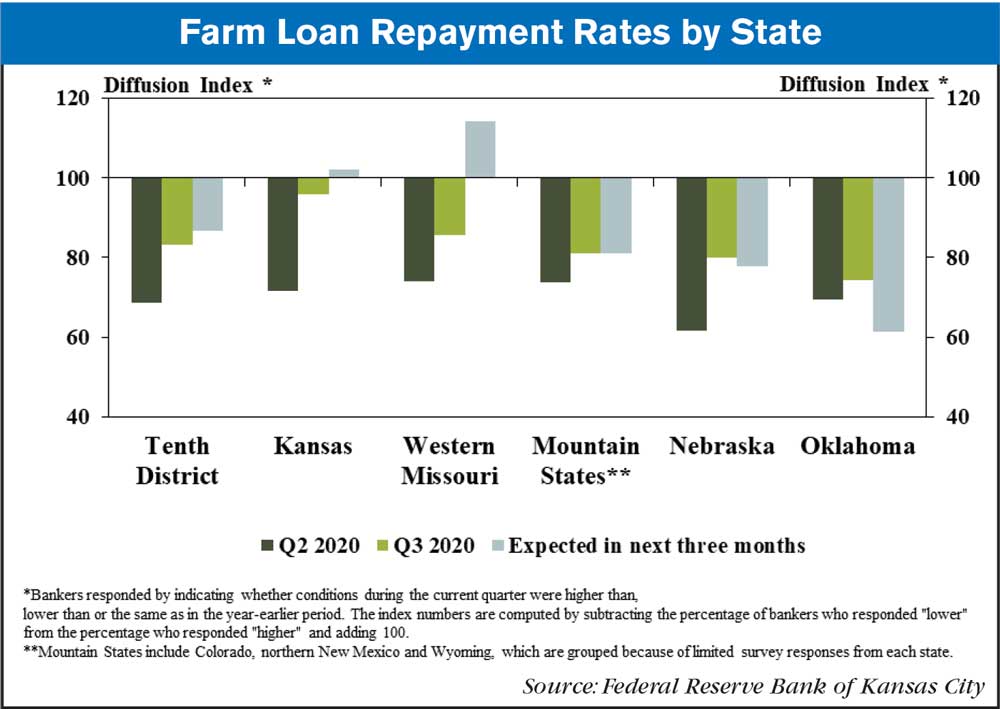 With an improved financial outlook from recent months, problem loan rates in the third quarter also dropped. Respondents indicated the average share of farm loans monitored for potential problems or exhibiting weaknesses throughout the area reached the lowest level in five years (Chart 6). The share of loans placed on a watch list declined from a year ago in all states expect Nebraska and Oklahoma and the classification rate of farm loans reported was lower in every state in the District. 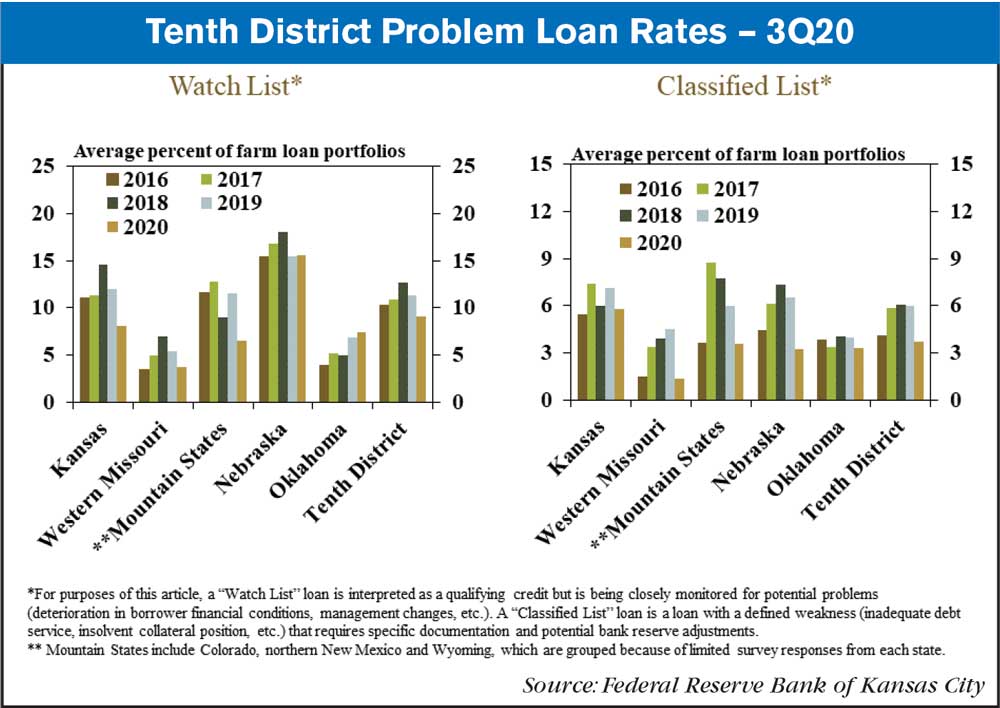 The pace of renewals or extensions for existing borrowers remained elevated, but rates of liquidation slowed. Slightly more than 25% of respondents continued to report an increase in renewal or extension activity, but that was down from 40% in prior quarters (Chart 7). Alongside improved profit opportunities for producers and slower deterioration in liquidity, the share of bankers with borrowers selling machinery or land to bolster working capital declined notably and about 35% indicated that no borrowers had any planned sales. Interest rates on agricultural loans continued to decline in the third quarter and farmland values increased slightly throughout the District. Variable rates on operating loans and fixed rates on farm real estate loans reached historically low levels and provided support to farmland values (Chart 8). The value of nonirrigated cropland and ranchland increased 3% from a year ago and nonirrigated farmland also increased slightly for the second straight quarter. 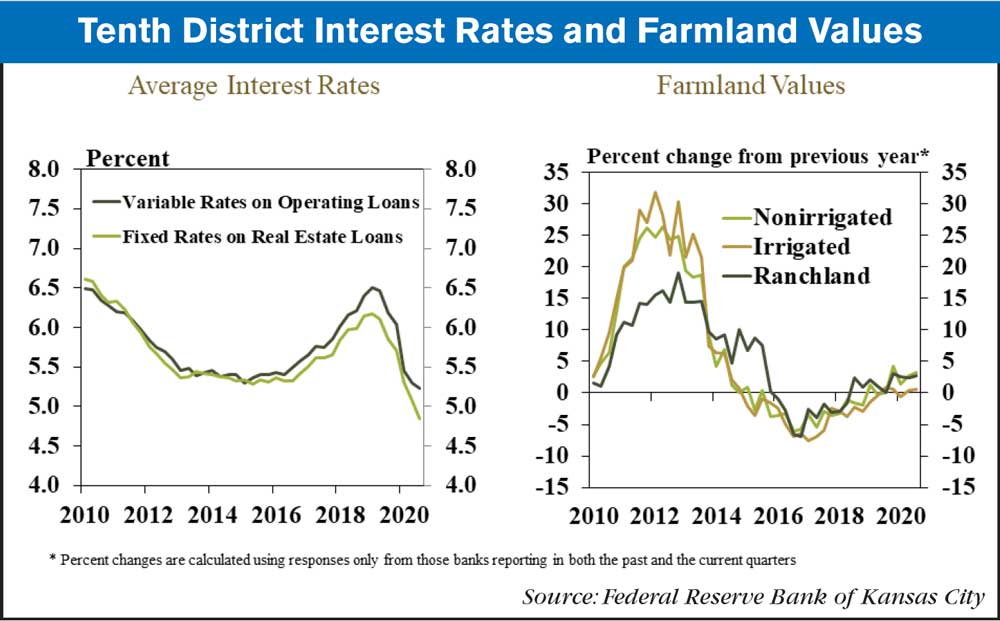 The stability of farm real estate values was consistent across all types of land in a majority of states. On average across all types of farmland, values increased from a year ago in all states expect Nebraska (Table). The average increase was over 5% in Oklahoma and western Missouri and less than 5% in the Mountain States and Kansas. 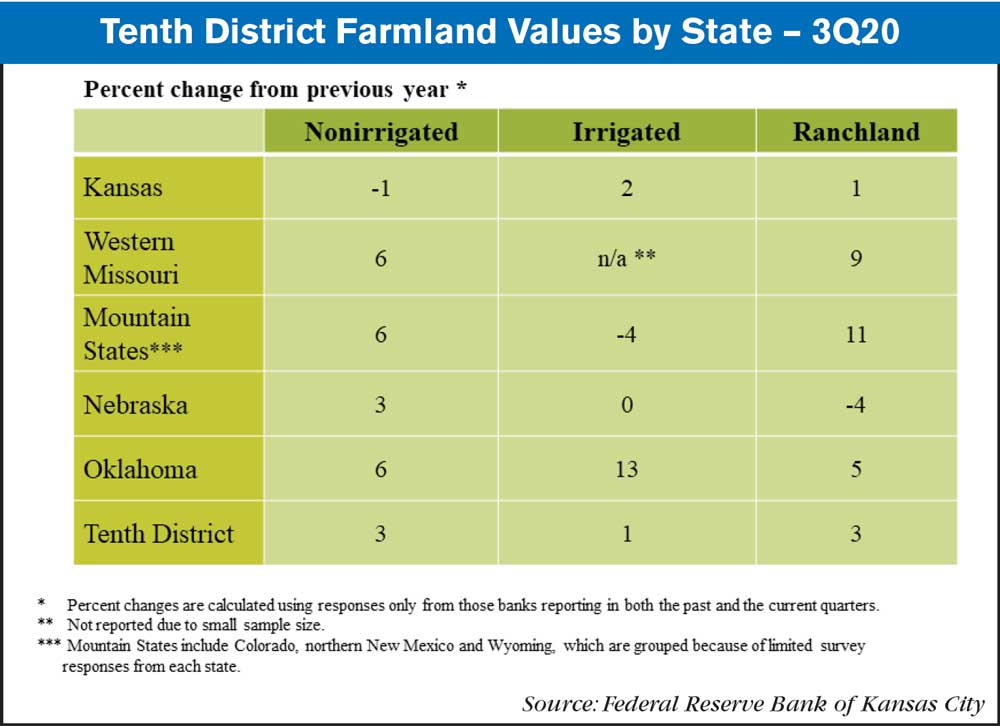 Better profit opportunities for both crop and livestock producers, as well as additional government support across the sector, created more favorable conditions for farm finances in 2020 than earlier in the year. Farm income and credit conditions remained weak, but the pace of deterioration slowed from the last quarter and demand for farm loans was more subdued. Amid improvement to cash flows and repayment capacity, bankers were monitoring a smaller share of loans for problems. Bankers continued to express concerns, however, about the potential for renewed pressure in the months ahead, depending on the path of agricultural commodity prices and government support programs.