Farmland values for the Seventh Federal Reserve District were up 2% in the third quarter of 2020 from a year ago, given support from lower interest rates, additional government payments and some rising agricultural prices.

However, values for “good” agricultural land in the District overall were the same in the third quarter of 2020 as in the second quarter, according to the 144 bankers who responded to the Oct. 1 survey. The vast majority of survey respondents (82%) anticipated the District’s farmland values to be stable during the fourth quarter of 2020. Yet, notably, more of them anticipated an increase in District farmland values in the final quarter of this year than anticipated a decrease. 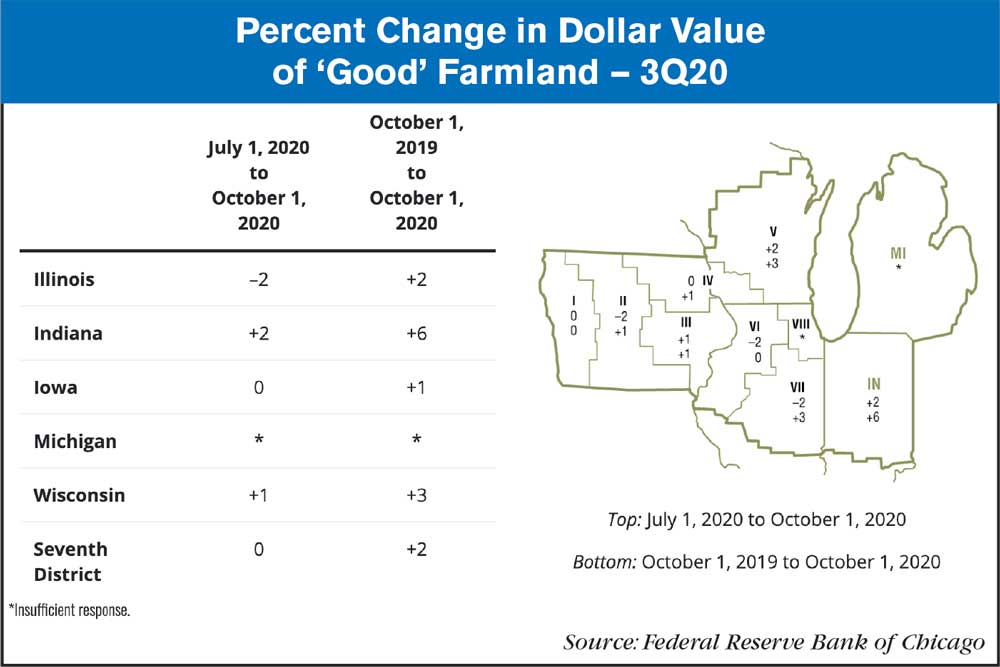 After a very challenging 2019, crop conditions in 2020 were better for most of the District. District-wide corn and soybean yields in 2020 were quite close to their historical highs, with some states reaching record levels, according to U.S. Department of Agriculture (USDA) data (see chart 1). The USDA forecasted the five District states’ harvest of corn for grain in 2020 to increase by 9% from 2019, which would put it among the top five of all time. Likewise, the USDA forecasted soybean production for the five District states in 2020 to rise by 16% from 2019, which would make it the fourth-largest harvest on record. 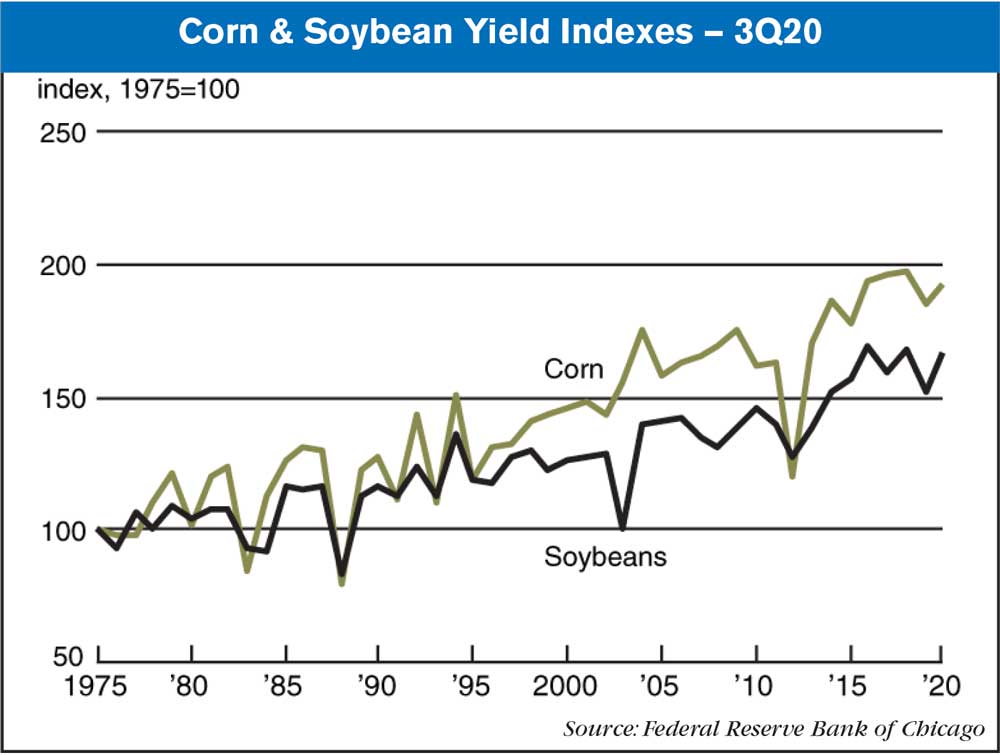 The average price of corn in September 2020 was 9.3% higher than in August, but still 10% lower than a year ago, based on USDA data. Meanwhile, the average price of soybeans in September was 6.7% higher than in August and 11% higher than a year ago. While the October USDA forecasts for national corn and soybean production were large, they were lower than forecasts made over the summer. Moreover, USDA forecasts for corn and soybean stocks were lower relative to previous estimates. So, given the projected supplies of these crops were revised downward, their prices continued to rise. In October, the USDA raised its price forecasts for the 2020-21 crop year for both crops — to $3.60 per bushel for corn and $9.80 per bushel for soybeans. When calculated with these price estimates, the projected revenues from the 2020 corn and soybean harvests for District states would increase from 2019 by 10% and 33%, respectively.

In the third quarter of 2020, livestock prices were generally recovering from the impacts of the Covid-19 pandemic. Compared with a year earlier, September average prices for hogs, cattle, and eggs were up 5%, 1% and 22%, respectively. While milk’s average price in September was down 7% from a year earlier, its average price for the third quarter of 2020 was up 1%. There was also a pickup in agricultural trade, which helped matters. Additionally, by the end of October, the Coronavirus Food Assistance Program (CFAP) had dispersed over $2.4 billion to farm operations in the five District states (24% of the $10.3 billion sent nationwide). As one Wisconsin respondent noted, “With higher prices and government payments, dairy and crop producers will end the year better than expected.” 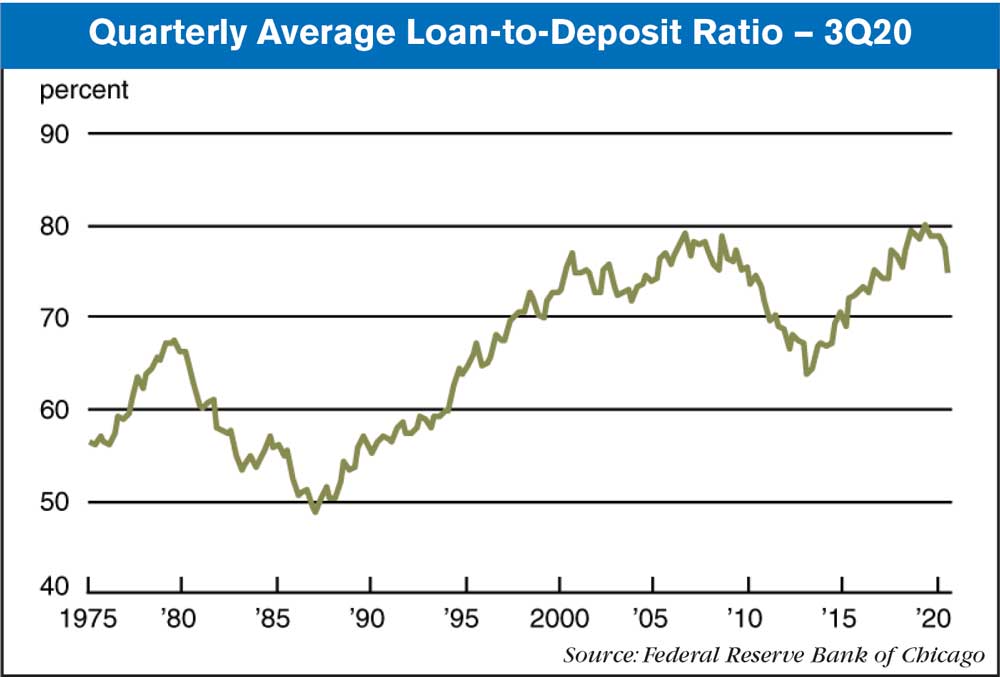 For the July through September period of 2020, repayment rates on non-real-estate farm loans were a bit lower than a year earlier. The index of loan repayment rates was 93 in the third quarter of 2020, as 8% of responding bankers observed higher rates of loan repayment than a year ago and 15% observed lower rates. In addition, renewals and extensions of non-real-estate agricultural loans were higher in the third quarter of 2020 than in the same quarter of 2019, with 27% of the responding bankers reporting more of them and 5% reporting fewer. As of Oct. 1, 2020, the District’s average interest rates on new operating loans, feeder cattle loans, and farm real estate loans had fallen to their lowest levels on record: 4.7%, 4.8% and 4.2%, respectively.

In contrast with the pattern of the past few years, crop net cash earnings (which include government payments) were expected to be up during the fall and winter from their levels of a year earlier: 44% of survey respondents forecasted crop net cash earnings to increase over the next 3-6 months relative to a year ago, and 28% forecasted these earnings to decrease. According to the responding bankers, the District’s hog, cattle and dairy farmers were once more anticipated to endure lower net cash earnings over the fall and winter relative to a year earlier.

By a slim margin, survey respondents forecasted loan repayment rates to decline this fall and winter from a year ago: 22% of the responding bankers predicted a lower volume of farm loan repayments over the next 3-6 months compared with a year earlier, while 18% predicted a higher volume. In addition, forced sales or liquidations of farm assets owned by financially distressed farmers were expected to increase in the next 3-6 months relative to a year ago, according to 31% of the responding bankers (8% expected a decrease). The District’s overall non-real-estate farm loan volume in the October through December period of 2020 was anticipated to be roughly similar to that in the same period of 2019, whereas the District’s volume of farm real estate loans was forecasted to be somewhat higher.

Another Wisconsin banker stated that because federal government payments have made up such a large share of net farm income in 2020, “it will be hard for farmers to find a chair when the music stops.” Until then, the circling continues while the District’s farms prepare for uncertain times ahead.