Deutz registered a sharp overall decline in business performance in the first 9 months of 2020, which was in line with its expectations. This was due not only to the macroeconomic effects of the coronavirus crisis, which in an already challenging market environment made customers in various industries much less willing to invest and thus triggered a collapse in demand, but also, in particular, to the fact that customers were continuing to run down the inventories of engines they had built up before new emissions standards came into force. Furthermore, business operations were disrupted during the period under review as a result of a temporary production shutdown in April 2020 because of coronavirus. 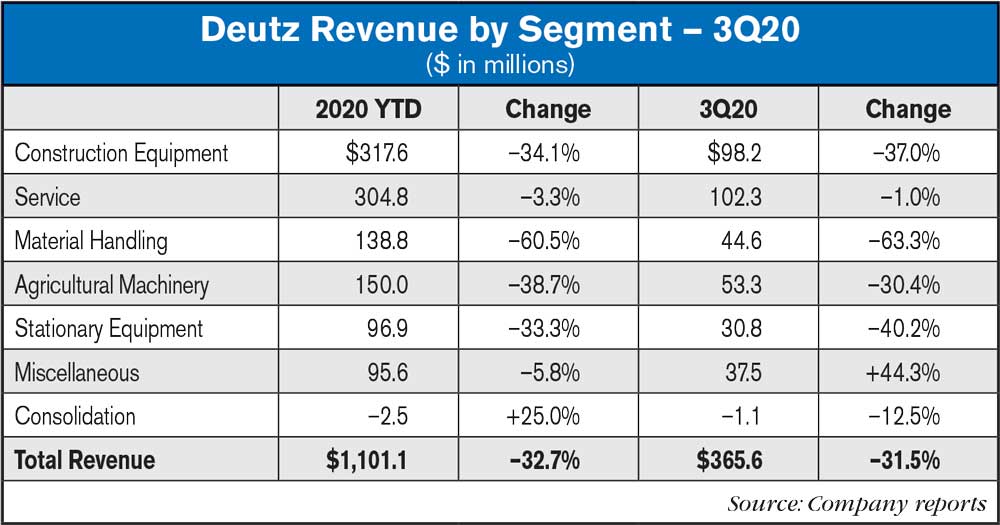 In contrast to the sharp decline in Deutz's engine business in the first 9 months of 2020, the sales figures for the third quarter of 2020 were higher overall than those for the second quarter of the year. As a result, operating profit (EBIT before exceptional items) improved significantly compared with the previous quarter.

In the first three quarters of 2020, new orders received by Deutz fell by 29% year on year to $1105.8 million. New orders were down significantly in all the main application segments, not only because of the collapse in demand related to the coronavirus crisis but also due to the high level of new orders in the prior-year period as a result of customers building up their inventories of engines before new emissions standards came into force. Only the Miscellaneous segment recorded an increase in new orders, by 5.4% to $107.8 million, which was attributable to the exceptionally strong growth in orders for rail vehicle drive systems.

The Deutz Group sold a total of 108,559 engines in the reporting period, which was 30.3% fewer than in the first three quarters of 2019. Among the application segments, the only one with a significant increase in unit sales was Miscellaneous with a rise of 67.6%. This improvement was partly due to the ramp-up of trolling motors made by Deutz subsidiary Torqeedo, whose unit sales nearly doubled year on year after selling a total of 24,057 electric motors.

The driving factors behind the drop in unit sales in the other application segments were generally weaker market demand and, in particular, adverse effects resulting from customers running down inventories of engines that had been purchased ahead of new emissions standards coming into force. DEUTZ’s unit sales were up by 2.7% compared with the second quarter of 2020, mainly due to double-digit percentage increases in the Material Handling and Agricultural Machinery application segments. In terms of regions, this increase in unit sales was attributable to the Americas and the EMEA region.

Because of the ongoing uncertainty as to how the coronavirus crisis will progress, it remains difficult to predict how this will affect the global economy in the final part of 2020. It is therefore still not possible to present quantitative guidance for the year as a whole. Nevertheless, it can be assumed that the performance of the business in the fourth quarter of 2020 will continue to be adversely affected by the coronavirus crisis, although to a lesser extent than in the third quarter. In the final quarter of 2020, Deutz therefore expects both its sales figures and its operating profit (EBIT before exceptional items) to see a further quarter-on-quarter improvement. The Company expects to see a recovery in its main sales markets over the coming months. From a current perspective, however, it appears likely that these markets will need a long time to return to their pre-crisis levels.