The effects of the COVID-19 pandemic continued to pressure the agricultural economy and weighed on farm finances in the Tenth District. Farm income declined in the second quarter at the quickest pace since 2016, and weaknesses in both income and borrower liquidity were expected to carry into the coming months. Agricultural credit conditions remained weak overall, but relatively stable. Looking to the coming months, however, bankers expected farm borrowers to have greater difficulty repaying loans. Some of the current stability in credit conditions may be attributed to government programs that provided revenue support and additional financing options for borrowers.

Alongside disruptions related to COVID-19, farm income declined at a considerably faster pace in the second quarter. Weak market conditions for key agricultural commodities limited profit opportunities, and farm income in the District dropped at the fastest rate since 2016 (Chart 1). Looking to the next quarter, declines in income were expected to persist. The deterioration in income during the second quarter and expectations about the coming months generally were consistent across all states in the region. 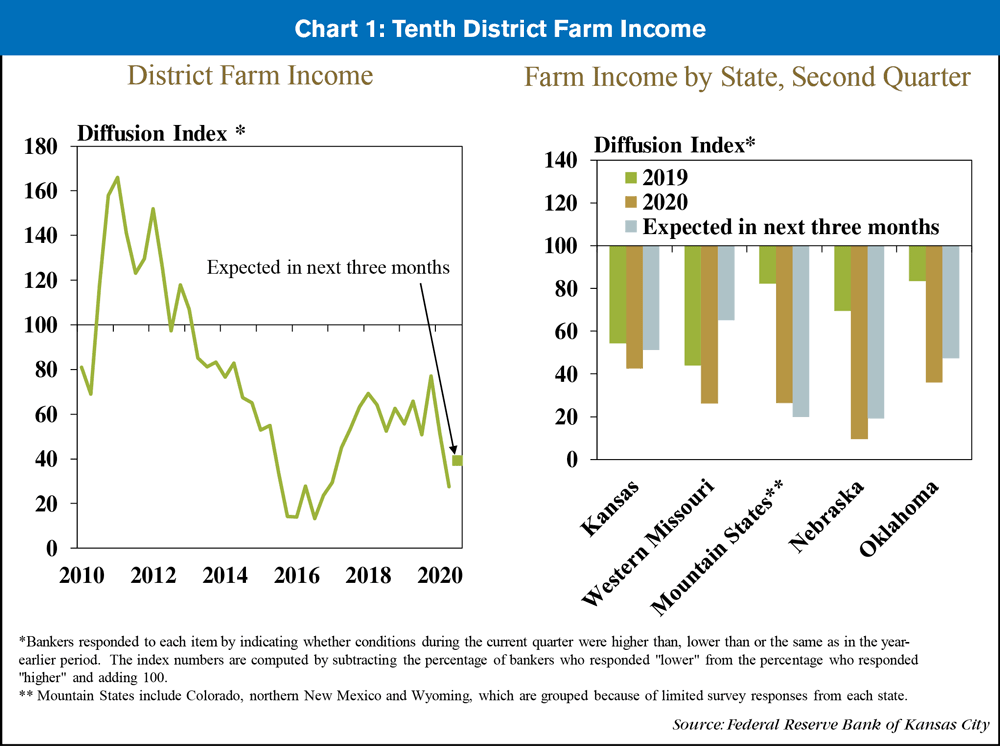 Lower farm revenues also put downward pressure on liquidity among farm borrowers. A majority of bankers reported that borrower liquidity decreased in the second quarter and additional declines were expected in coming months (Chart 2). The decrease generally was consistent across all states, with a comparably higher share of banks in Nebraska reporting reduced short term funds among borrowers. Even prior to the pandemic, the U.S. Department of Agriculture (USDA) had forecast additional declines in working capital for the U.S. farm sector in 2020. Recent developments may put additional pressure on many producers. 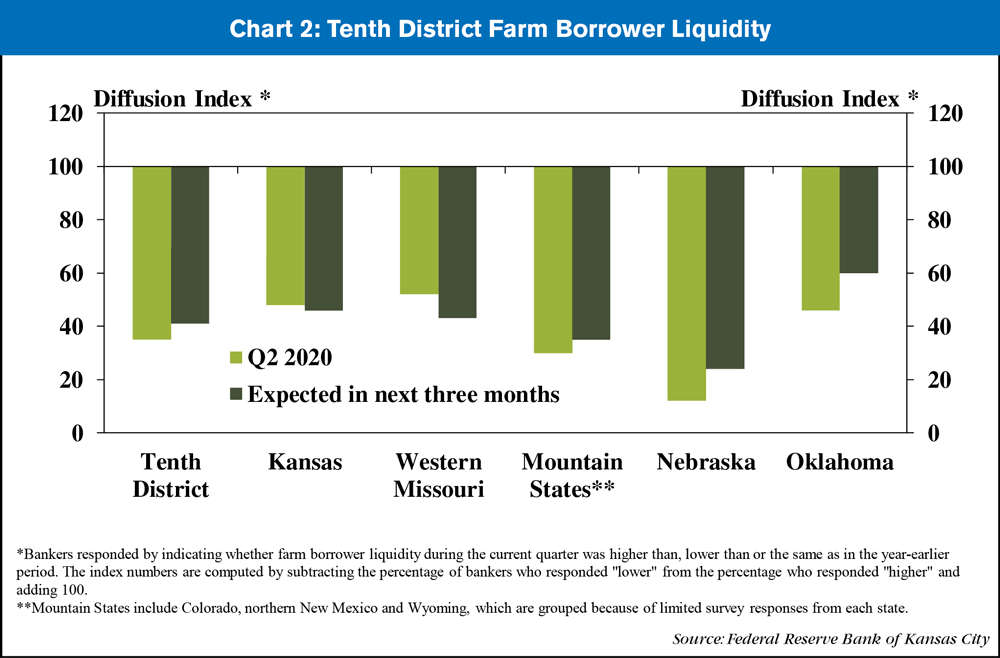 While revenues and income weakened considerably throughout the District, government aid programs were expected to provide relief to farm finances. Nearly 95% of respondents throughout the region indicated that support from the Coronavirus Food Assistance Program (CFAP) was likely to boost farm income and support credit conditions (Chart 3). A majority of banks expected the effect of the direct payment assistance to be “moderate” and about 30% characterized the support as “significant.” 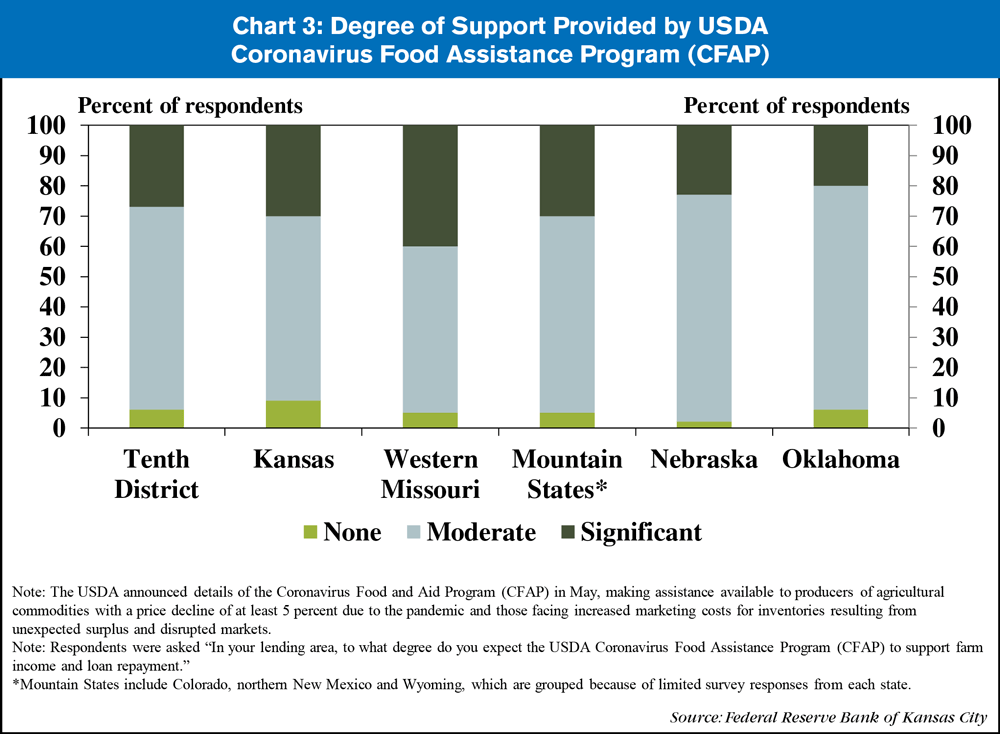 Respondents also anticipated that the Small Business Administration’s Paycheck Protection Program (PPP) would provide material support. About 90% of respondents indicated that the program would support farm income and credit conditions (Chart 4). Similar to the CFAP, most expected the effect of loan assistance to be “moderate” with about 20% describing the support as “significant.” The PPP, along with other lending programs such as Economic Injury Disaster Loans, likely will supplement the borrowing needs of agricultural producers able to utilize the funds for eligible expenses. 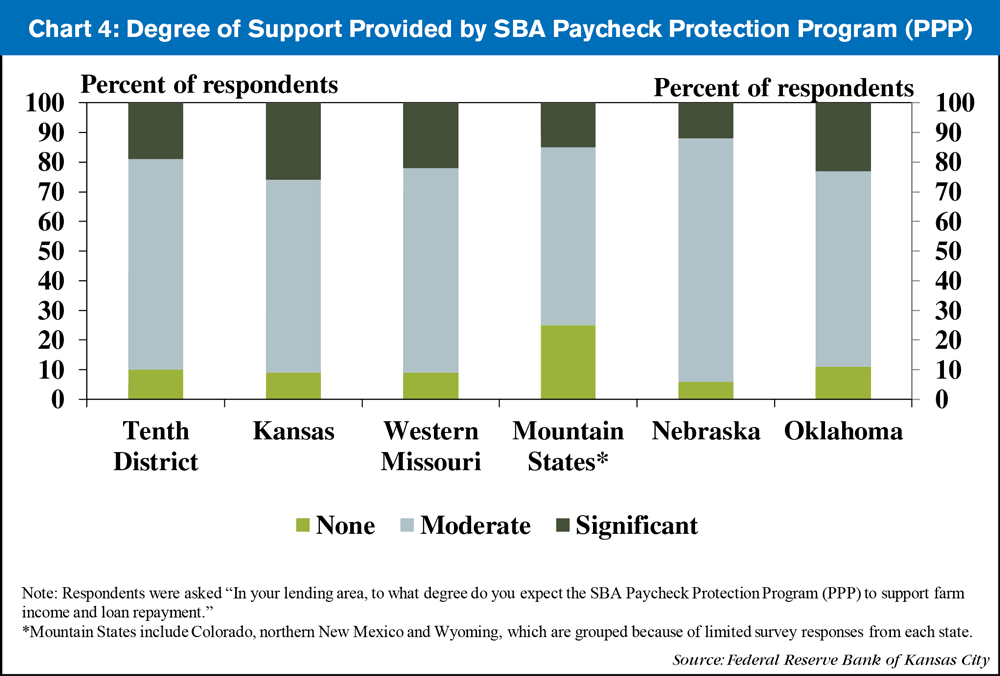 Lower farm income and liquidity contributed to weaker credit conditions, but repayment problems remained stable. Although the pace of decline in repayment rates in the second quarter remained similar to the first quarter, bankers expected farm borrowers to have more difficulty making loan payments in the next 3 months (Chart 5). However, like previous years, only 27% of bankers reported some level of repayment problems and, on average, less than 3% of farm loan applications were denied. Some bankers commented that, although they expected some deterioration in coming months, most concerns related to repayment capacity of farm borrowers remained manageable in the second quarter. 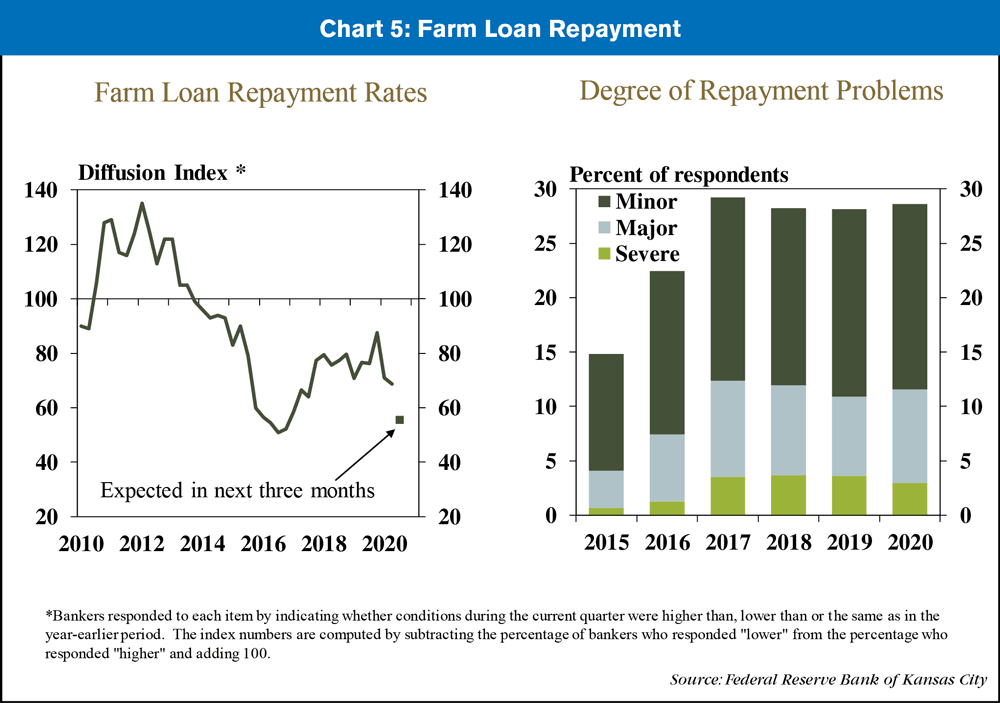 Alongside low commodity prices and COVID-19, drought has placed additional pressure on agricultural credit conditions in the western portion of the Tenth District. Compared with the eastern half of the region, a larger share of bankers further west expected farm borrowers to have more problems repaying loans over the next 3 months, as concerns of drought have intensified. Most of western Oklahoma and the Mountain States were experiencing some level of drought and large portions of Colorado were in extreme drought (Chart 6). Consequently, more bankers in the western part of the District reported weaker credit conditions in the second quarter compared with the east. About 50% expected repayment rates to decline in the next 3 months. 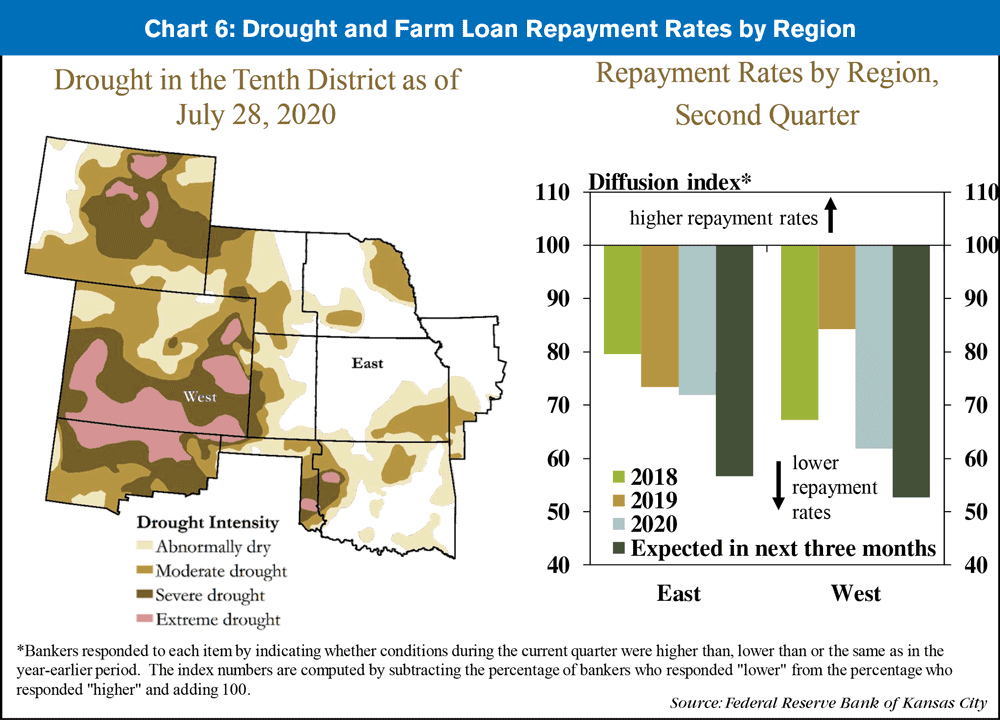 Growth in demand for new loans was muted in the second quarter, but reduced profits in the agricultural sector seemed to keep renewals and extensions elevated. The pace of growth in new loans and renewals on existing loans slowed slightly compared with the previous quarter. However, renewals and extensions continued to grow at a faster pace than loan demand (Chart 7). Government programs, such as CFAP and PPP, may have reduced the need for traditional financing options (Kauffman and Kreitman 2020). In addition, amid weaker financial conditions surrounding COVID-19, there may have been some hesitation to extend new financing. 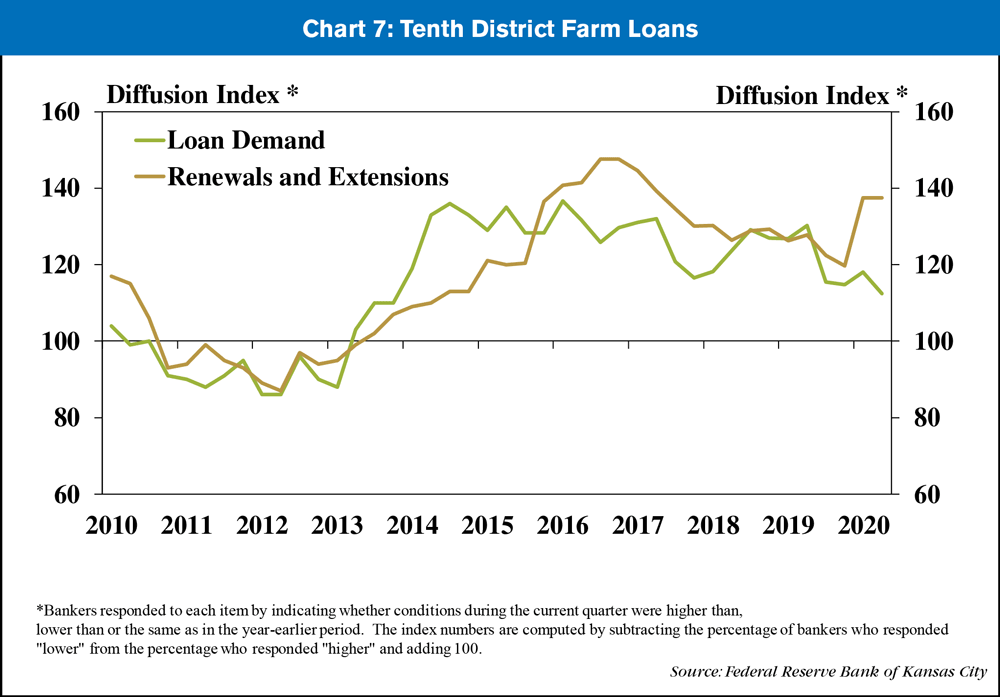 Alongside persistent growth in financing needs for farm borrowers, fund availability continued to expand. The increase in funds available for financing relative to the previous year was the highest since 2013 and likely was supported by a sharp increase in deposits (Chart 8). Credit programs available for farmers also may have supported liquidity at agricultural banks. However, although bankers projected funds would continue to increase, the pace was expected to decline in future months. 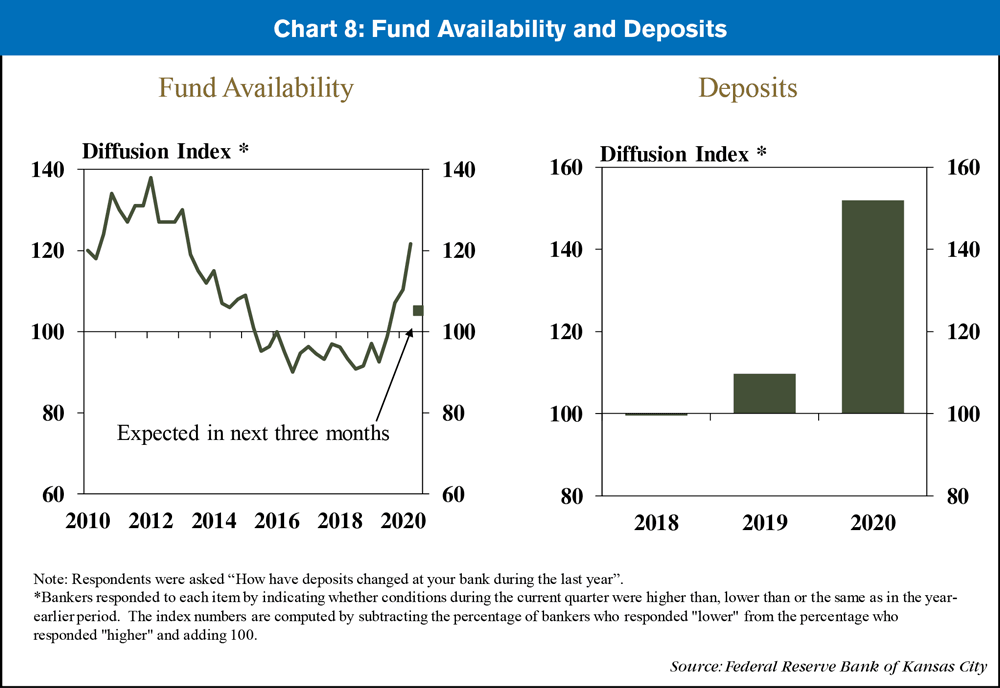 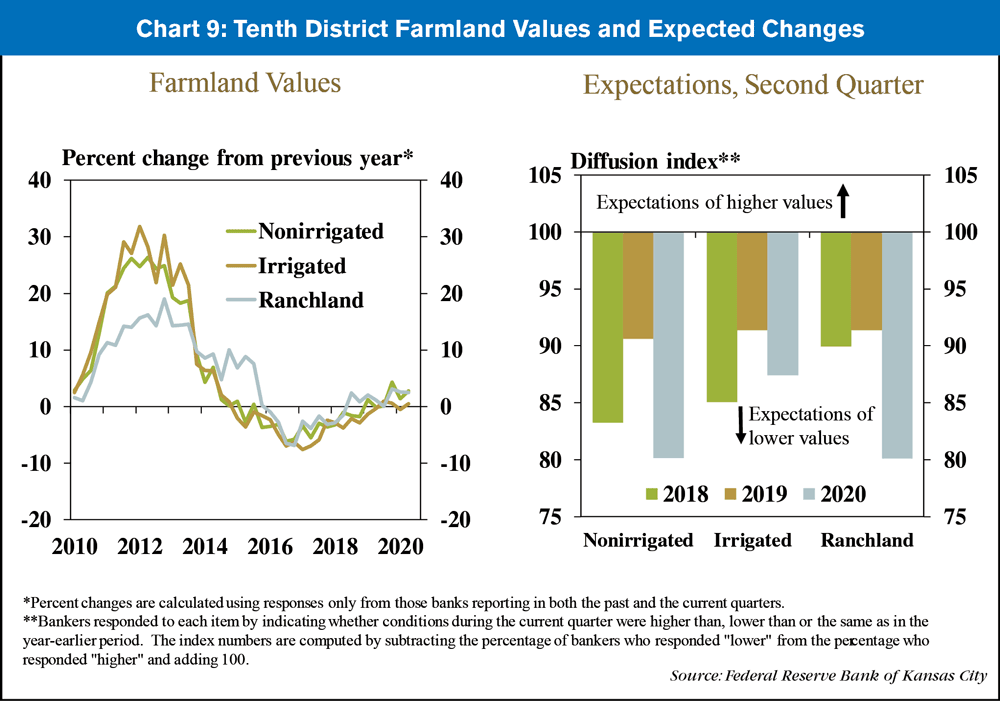 Contrary to recent trends in farmland values, cash rents decreased slightly. Cash rents across the District declined almost 2%, driven by notable decreases in Kansas, Missouri and Nebraska (Chart 10). Cash rents were unchanged in the Mountain States and continued to increase slightly in Oklahoma, though at a slower pace. The slowdown in cash rents coincides with growing challenges associated with revenue generation for District farmers in 2020. 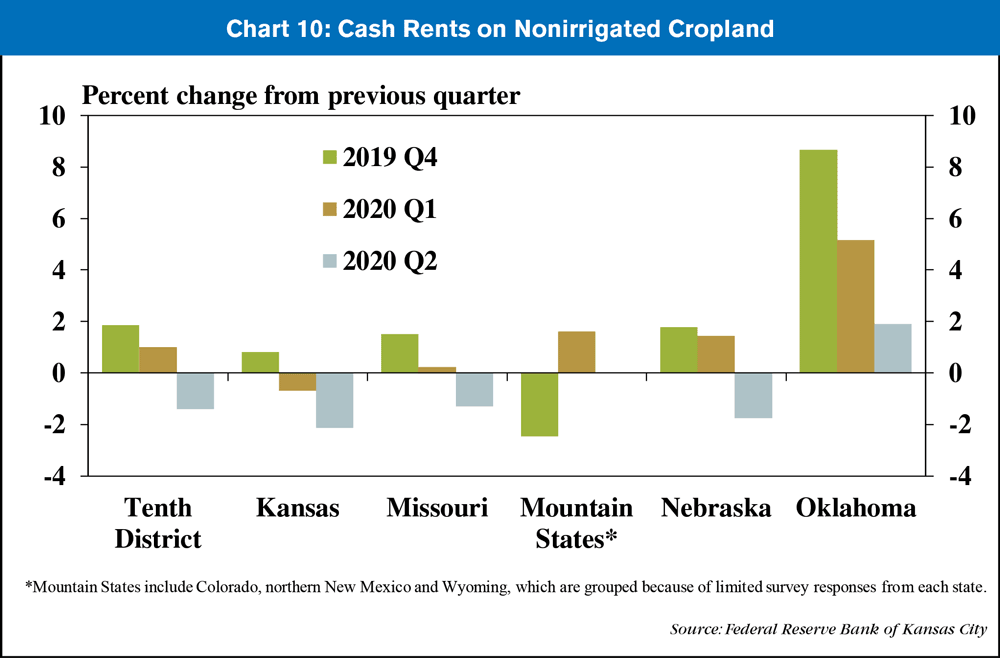 Interest rates on all types of loans reached historically low levels in the second quarter. Following reductions in benchmark rates, interest rates on operating loans fell to 5.5% (Chart 11). Rates on loans to finance farm machinery were slightly lower than short-term rates, and the average rate for real estate loans was just above 5%. Although interest expenses make up a small share of total farm expenses, lower interest rates could offer some relief to farm borrowers in a financial environment constrained by low commodity prices. 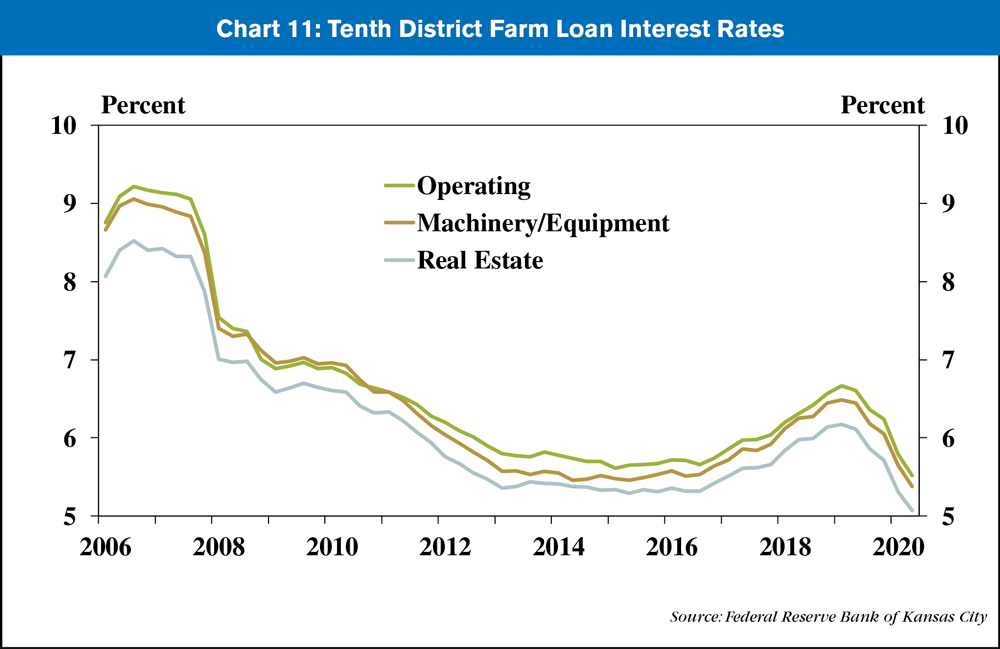 Farm income and credit conditions in the Tenth District deteriorated further in the second quarter. Low commodity prices and concerns about the effects of the pandemic on demand for agricultural products weighed on farm income and expectations about repayment rates on farm loans. Most bankers reported that direct government support programs were expected to provide relief for lower revenues and credit programs could supplement the borrowing needs of some producers. However, continued uncertainty, low commodity prices and emerging drought in the western portion of the District could put additional pressure on agricultural economic conditions moving forward.

Brazil’s Farmers Return to First Farm Show After the Pandemic