Domestic revenue decreased by ¥5.9 billion ($55 million) or 3.8% from the same period in the prior year to ¥150 billion ($1.4 billion) because revenue in Farm & Industrial Machinery decreased mainly due to decreased sales of farm equipment. On the other hand, revenue in Water & Environment, whose businesses are mainly related to public works projects, increased slightly.

Farm & Industrial Machinery is comprised of farm equipment, agricultural‐related products, engines, and construction machinery. Revenue in this segment decreased by 10.3% from the same period in the prior year to ¥346.9 billion ($3.2 billion), and accounted for 78.9% of consolidated revenue.

Operating profit in this segment decreased by 40.8% from the same period in the prior year to ¥30.5 billion ($280 million) due to some negative effects such as decreased revenue in the domestic and overseas markets and a deterioration in profitability of products, which were shipped in this fiscal year, in its manufacturing bases. 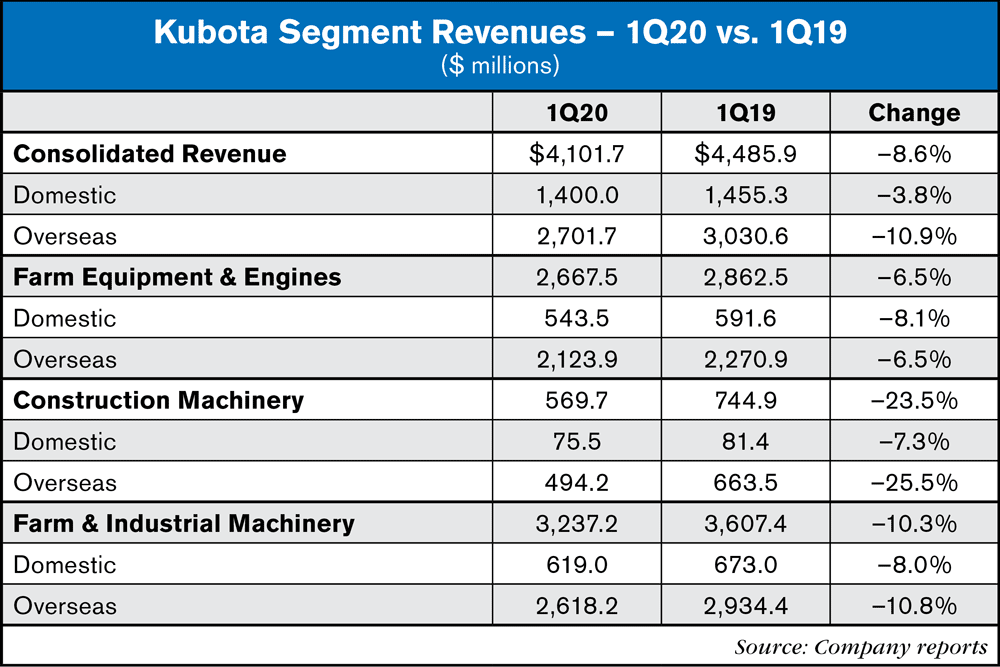 The infection spread of COVID‐19 has impacted on its production and sales activities in each region, and the outlook for demand trends is unclear. At this time, there are many uncertain factors that may affect the results of operations, and it is difficult to calculate the rational forecasts. Accordingly, the Company decided to revise the forecasts of the results of operations for the six months ending June 30, 2020 and the year ending Dec. 31, 2020, which were announced on Feb. 14, 2020, to undetermined temporarily. Going forward, the Company will disclose them again when it becomes possible to calculate the rational forecasts.