Under 40 Horsepower Tractors — An excellent month! Retail sales were 14.6% above our monthly forecast and the total is now only 1.7% below our year-to-date forecast. 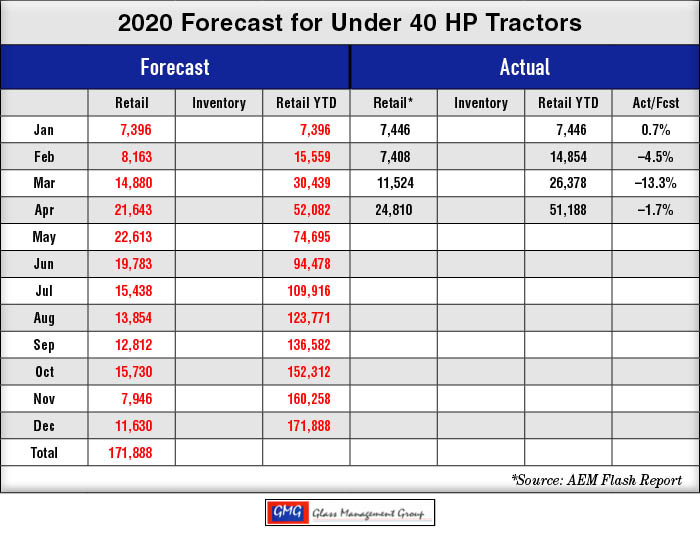 40-99 Horsepower Tractors — The April retail sales were 4.7% above our monthly forecast and the year-to-date total is 5.2% below our forecast. 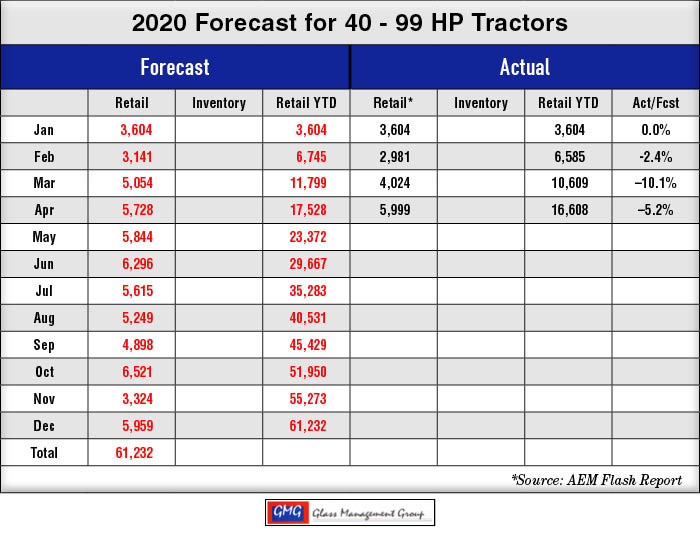 100+ Horsepower Tractors — April retail sales were –9.5% below our monthly forecast and the year-to-date total retail was 4.8% below our forecast. 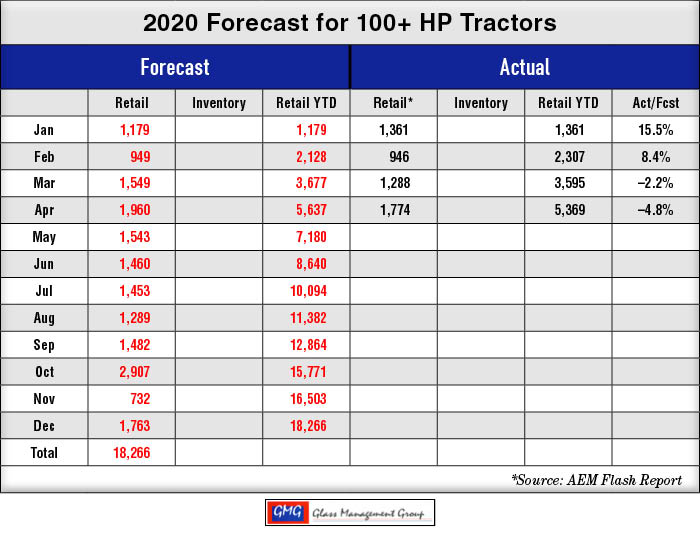 4WD Tractors — Retail sales for this segment was only one unit below our monthly forecast and the year-to-date retail sales 2.1% below our forecast. 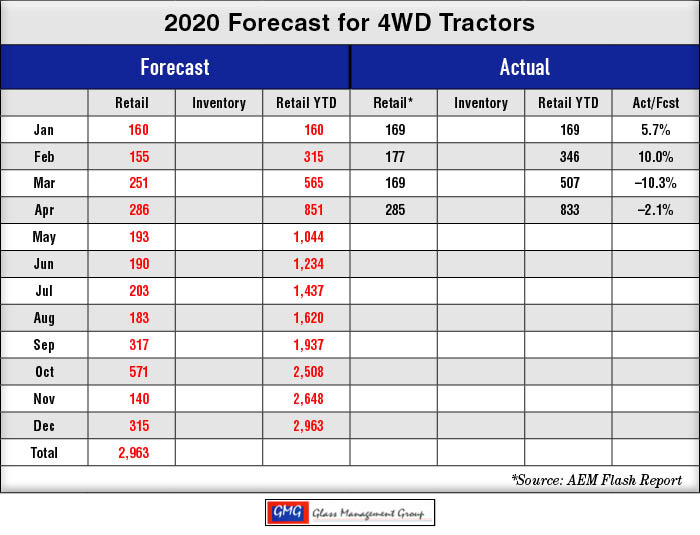 Combines — April combine sales were 8.9% above our monthly forecast and the year-to-date retail sales are 1.1% over our forecast. 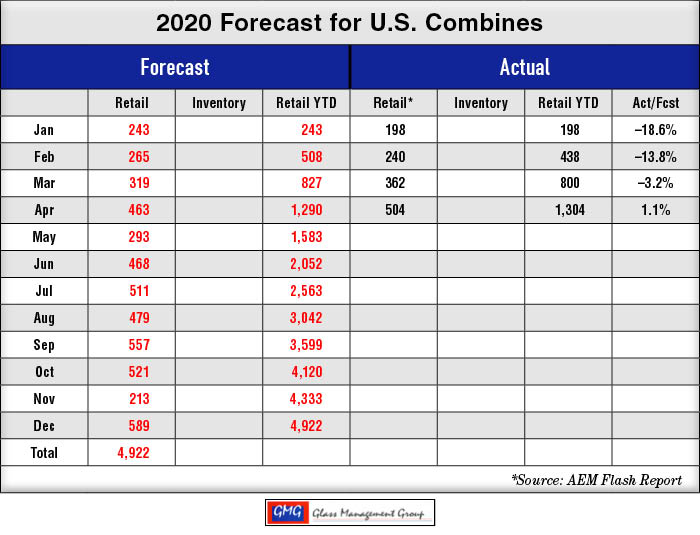 The COVID-19 virus is still rampant in New York, New Jersey and other large population centers but many states have slowly begun to reopen their economies. The impact on U.S. agricultural producers has been somewhat delayed but it has also been dramatic.

States in the middle of the country are the first to bring their economies back to life and even those efforts are in measured steps. There is an undercurrent of demand to return to work in many states where politicians have been keeping a lid on the opening of businesses.

An outbreak of COVID-19 in several meat processing plants has been reported by the national new media as an imminent shortage of meat products and an ensuing rush to the supermarket has made that come true. The problem is not with livestock producers but it is centered upon processing and distribution efforts.

The shelter in place requirements for practically all states has created a historic increase in unemployment numbers and a decline in spendable income for many of those who have become unemployed during this crisis. Consumer spending habits have been radically changed overnight and that certainly has impacted farm equipment dealers, also. U.S. unemployment rate is expected to be in the 15-16% range for April and that will rival the unemployment rates of the great depression.

The current stay at home orders have had the effect of reducing the demand for gasoline and consequently has had a major negative effect upon the ethanol industry within the country. The lack of purchases by these plants has reduced corn prices over the month even though Mexico and Japan have actually increased their buying in April.

Farmer sentiment moved even lower in April as the demand for grain crops continued to fall. The past Market Facilitation Programs have helped to support many grain farmers who had been adversely affected by the COVID-19 outbreak but the idea that their crops are selling at reduced prices has created a lack of interest in purchasing new tractors and equipment.

Our forecasting models had earlier indicated that larger horsepower tractor sales would be near those of 2019 but there is certainly pressure on these high horsepower units at this time. We continue to anticipate only replacement of those units that are absolutely essential to producing this year’s crop will be purchased.

The largest number of tractor sales in recent years has been the small horsepower tractors (up to 60 horsepower) and these smaller tractors will continue to represent the majority of the total number of tractors sold in 2020. April is normally one of the highest volume months for these units and we expect to see the total come in close to our original forecast for the month.

The approval of the USMCA and the Japanese agreement included an increase in corn purchases by these countries. South Korea, normally a large purchaser of U.S. produced corn, has turned to South America in recent weeks since those countries have offered bargain prices for their commodities.

China has continued to purchase U.S. soybeans but their year-to-date purchases are approximately 27% below last year’s purchases. This is primarily due to the impact of the COVID-19 outbreak in China. As they return to a more normal business atmosphere, those purchases will most likely increase.

The principal truth to come from this virus outbreak has been the dependency that U.S. manufacturers and consumers have on foreign produced products and components.  The Obama administration had taken a much more global view of the economy and felt that basic industries were handled more efficiently by the low wage countries and the U.S. was better off with an economy dominated by service industries. We are now coming to realize that was a particularly shortsighted point of view and has placed the U.S. in a position of being dependent upon foreign sources for vital products such as medicine and equipment needed to combat the current pandemic.

Many farm equipment manufacturers benefited from the low prices for parts and components coming from outside the country and often felt that competitive pressures demanded they access those sources. Even though it might mean a slight increase in the cost of the final product, these same manufacturers are now searching for domestic sources that are more reliable than those outside the country.

There is much talk about the “new normal” but we should be back to the “old normal” by the end of 2021.