The COVID-19 pandemic came at a particularly bad time for agriculture. After multiple years of low commodity prices and a trade war that constricted access to overseas markets, the extreme disruption in the broader economy was the last thing farmers wanted to see. “Coronavirus decreasing grain market, oils and commodities markets,” said a Minnesota agricultural lender.

The Minneapolis Fed’s first quarter agricultural credit conditions survey, conducted during April, sheds some light on the early impacts of the pandemic on farmers and ranchers. Farm incomes fell from January through March relative to a year earlier. Spending on capital equipment and farm household purchases also decreased. Falling incomes pushed the rate of loan repayment down, while renewals and extensions increased. Respondents noted that cropland values generally decreased.

The closure of several livestock and poultry slaughter plants due to virus outbreaks among workers had many livestock producers concerned about the impacts on the food supply chain and whether there would be markets for animals. “If the meat packing industry does not change, it could be the final nail for most producers,” one South Dakota banker said. The outlook for the second quarter was for continued contraction, although several respondents noted great uncertainty due to the pandemic. 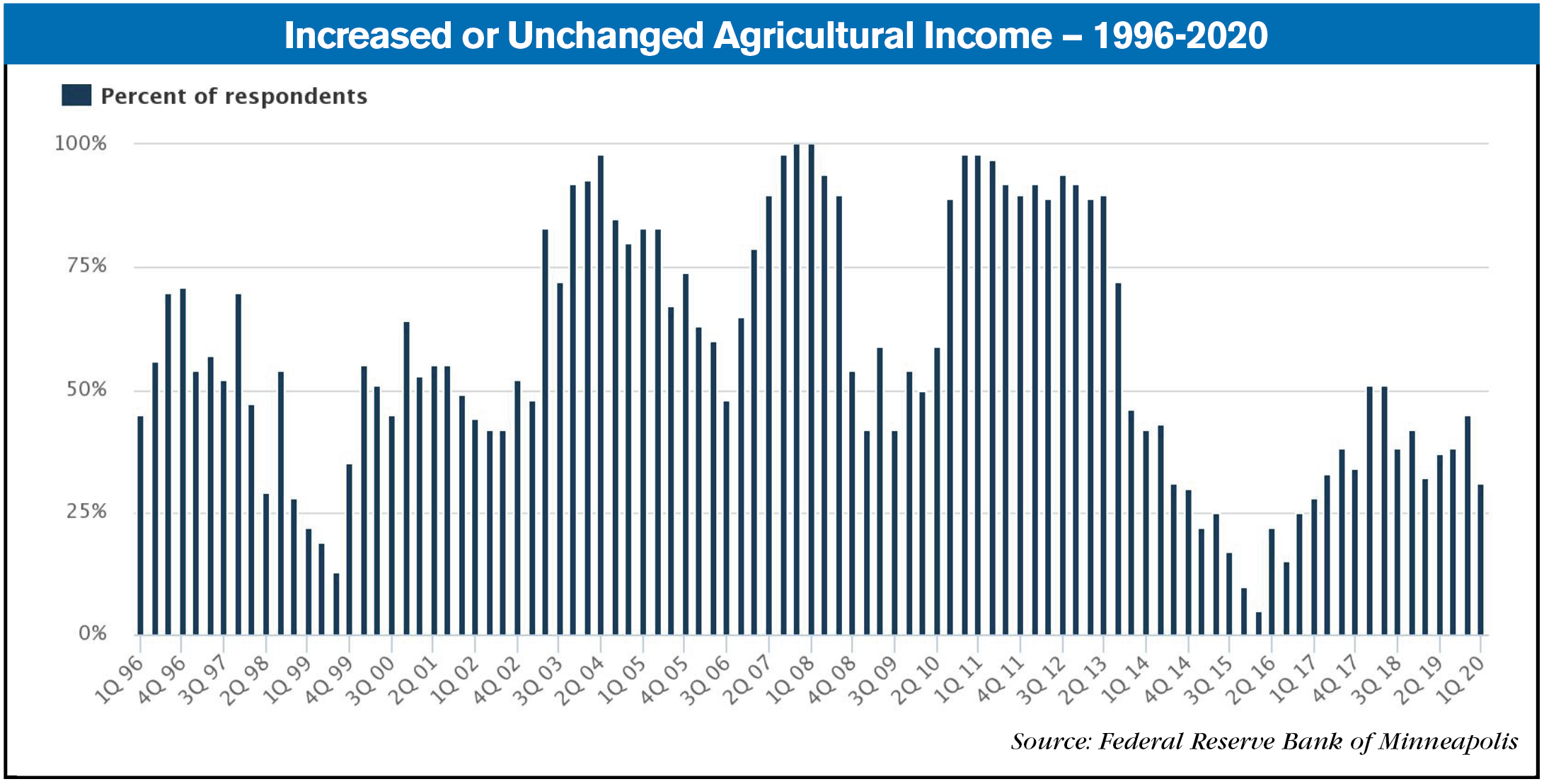 Conditions appeared worse in the western part of the district, as 79% of lenders in the Dakotas and Montana reported decreased income. About two-thirds of Minnesota lenders said incomes fell. In Wisconsin, by contrast, half of those surveyed reported increased or unchanged income (though that%age came from a relatively small number of total respondents). Wisconsin results for household and capital spending were more in line with the district as a whole.

Given tight finances for farmers, the rate of repayment on agricultural loans dropped, while renewals increased. Loan repayments decreased for half of respondents, while the other half reported that repayment rates were unchanged. Just over half of lenders — 52% —  reported a greater number of loan renewals or extensions, while nearly all of the remainder said renewal activity held steady. Again, financial conditions were more negative in the west: 68% of lenders in the Dakotas and Montana noted lower rates of loan repayment, compared with 30% in Minnesota and Wisconsin.

Downward pressure on farm incomes pushed demand for loans up on balance, according to bankers. Equal numbers of respondents indicated that loan demand increased or was unchanged — 43% each — compared with only 14% who noted decreases. The amount of required collateral increased at some agricultural banks, though more than three-quarters reported no change in collateral requirements. In one bit of relief for farmers and ranchers, interest rates fell substantially. Average fixed and variable rates on operating, machinery and real estate loans all decreased in the first quarter by about 50 basis points or more from the end of 2019.

Land values fell the most in Wisconsin, where lenders reported that non-irrigated cropland prices dropped almost 9% from a year ago. In Minnesota, by contrast, values for the same class of land were down by half a%; values in the Dakotas fell by between 2% and 4%. Cash rents on non-irrigated land also fell the most in Wisconsin — 7.5%. Those rents also declined 2.5% in South Dakota but increased slightly in Minnesota and North Dakota.

“In 2019, most producers survived because of MFP payments,” wrote a South Dakota lender, in reference to the Market Facilitation Program that the U.S. Department of Agriculture has used to support farmers negatively impacted by the trade disruptions. “If no payments are made in 2020 and commodity prices remain challenged, 2020 will see significant stress in the ag sector among the bottom 20% of producers.”

Expectations heading into the growing season were generally pessimistic. Across the district, 75% of lenders predicted that farm income will decrease in the second quarter of 2020, compared with 5% forecasting increases. The outlook for capital spending is similar, with 77% expecting decreases, while 48% expect farm household spending to fall. Expectations call for increased loan demand in the upcoming quarter, according to 61% of respondents, compared with a third who see no change. The outlook for loan repayment was generally lower, though slightly more than half expect no change in repayment rates. Lenders expected renewals to increase on average, but most said collateral requirements would remain unchanged.

However, several commenters noted that increased uncertainty due to the COVID-19 outbreak made forecasting more difficult than usual. “I have no idea how these events may affect these markets,” said a Montana banker. “I have no idea what will happen with the economy.” 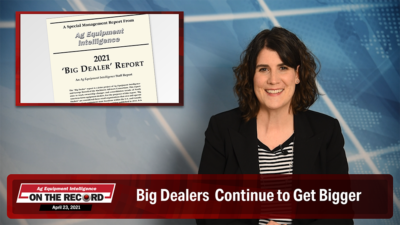 In this week’s program, we take a preliminary look at the 2021 Big Dealer Report. While the number of dealers operating 5 or more ag locations only increased by 1, the total number of stores big dealers operate was up by 5%. In the Technology Corner, Jack Zemlicka talks with Michael Boehlje with Purdue University’s Center for Commercial Agriculture about the shifting skillset for precision specialists. Also in this episode: the semiconductor shortage and whether it will impact ag, a look at the Biden Administration’s infrastructure bill, New Holland’s new methane-powered tractor and an improvement in ag exports to China.
View More