Prior to the emergence of global economic developments related to COVID-19, growth in farm lending continued to show signs of slowing. While the volume of operating loans in the first quarter of 2020 increased slightly from a year ago, overall demand for non-real estate loans declined. At the end of 2019, delinquency rates on farm loans continued to increase slightly, but agricultural credit conditions and farmland values were holding steady.

Capital cushions at agricultural banks, which have increased steadily in recent years, remained at historically high levels through 2019. As the effects of recent economic disruptions materialize in coming months, the current stability of farm real estate values and financial soundness of farm banks may be key sources of support for the sector.

According to data collected in early February, agricultural lending activity showed further signs of slowing in the first quarter, despite an increase in the volume of operating loans. The total volume of non-real estate loans remained above the historical average but were about 10% lower than a year ago. Despite a decline in most types of lending, loans for operating expenses increased nearly 10% (Chart 1). The overall decline was driven by a drop of about 30% in both livestock loans and loans for miscellaneous purposes. 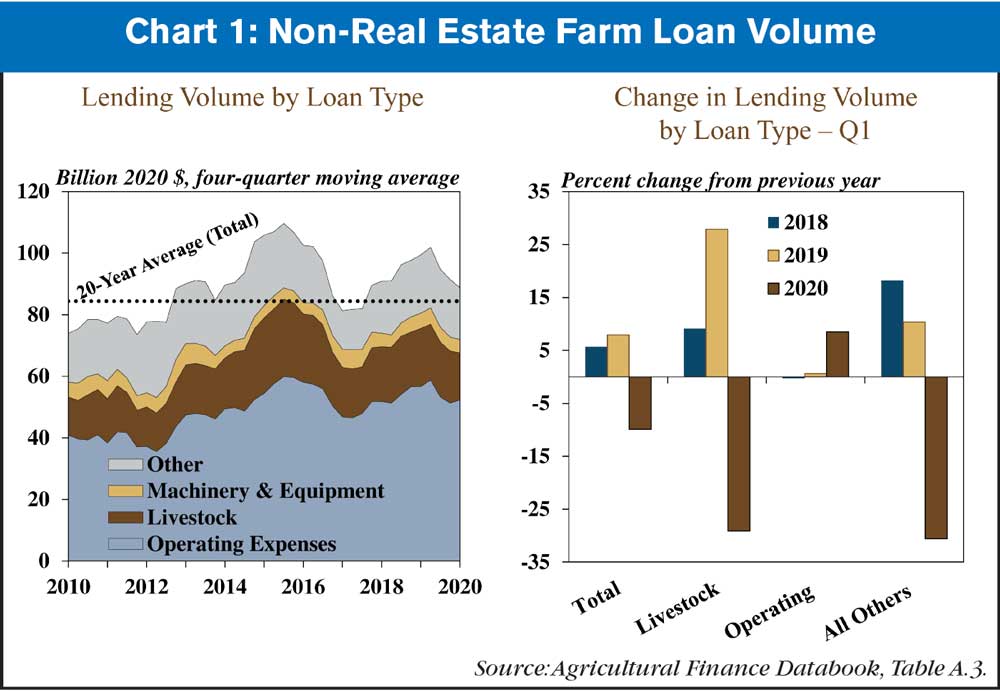 The upward trend in loan size appeared to wane, despite a larger average for operating loans. Since 2010, the average size of farm loans has trended steadily higher, but the pace of the increase has slowed following a sharp rise in late 2018 and early 2019 (Chart 2). Similar to loan volumes, operating loans were about 10% larger than a year ago while loans for all other purposes were smaller. However, the average size of all loan types over the past four quarters was below the trend level of growth through the first quarter. 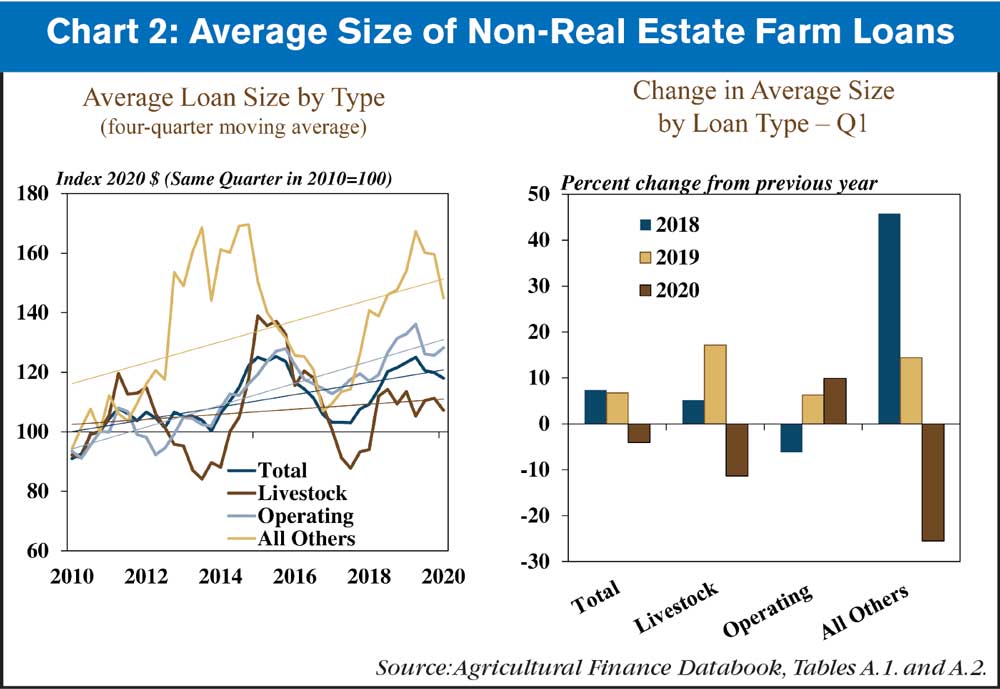 For loans used to finance operating expenses, a relatively high number of large loans contributed to the increase in average size. Despite a decline in the total number of new loans, the share and volume of short term loans greater than $1 million increased from a year ago (Chart 3). In contrast to operating lines, the volume of larger loans for all other purposes declined slightly. Overall, loans greater than $1 million have become more prevalent in the past decade and continued to influence changes in overall lending activity. 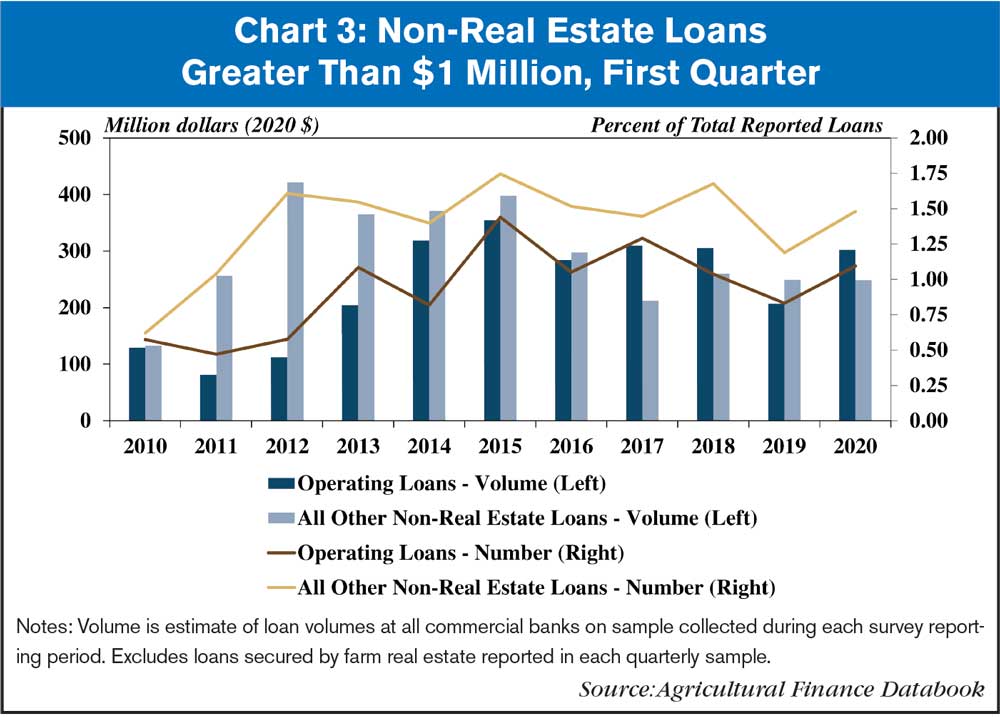 As lending for non-real estate farm uses slowed slightly from a year ago, interest rates on new farm loans declined alongside lower benchmark interest rates. Similar to the change in the bank prime lending rate through the first week of February, the average effective rate on all non-real estate loans was about 70 basis points less than the previous year (Chart 4). The combination of lower lending volumes and interest rates in the first quarter could reduce overall interest expense for producers. 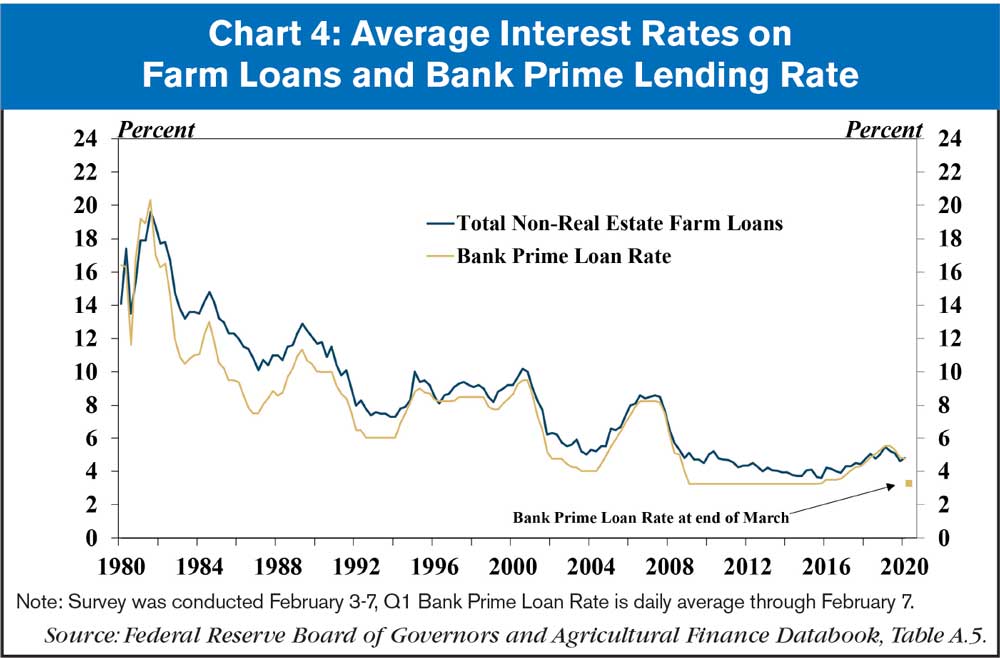 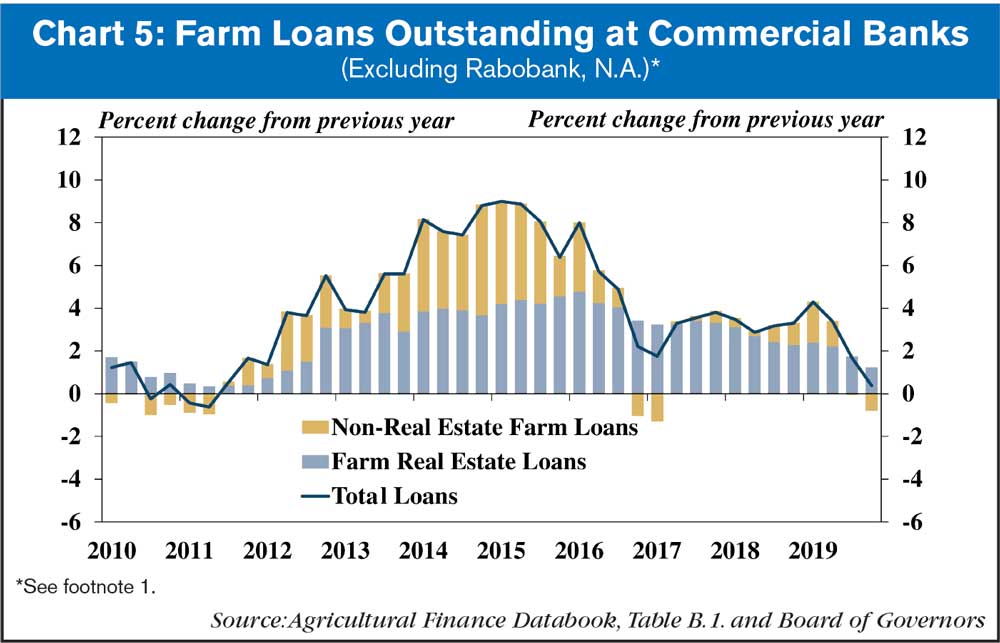 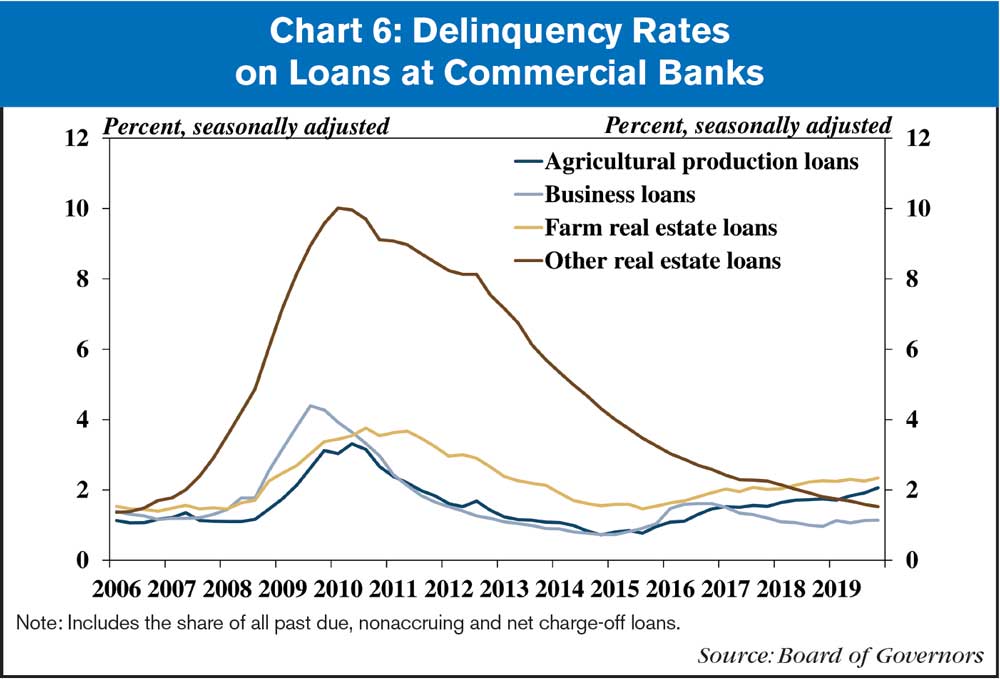 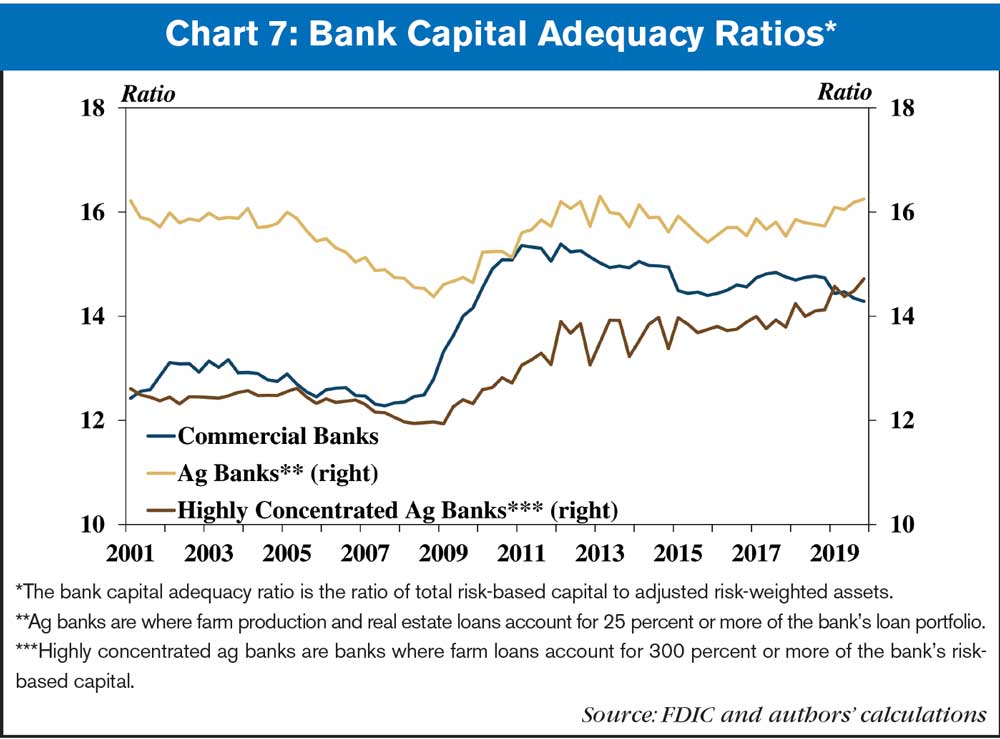 Alongside slightly higher loan delinquencies nationally, agricultural credit conditions in Federal Reserve Districts remained weak in the fourth quarter but appeared to stabilize somewhat at the time. For example, compared with previous years, repayment rates on farm loans declined at a slower pace in all Districts except Dallas (Chart 8). In the Chicago, Kansas City and St. Louis Districts, repayment rates declined at the slowest pace in 5 years. 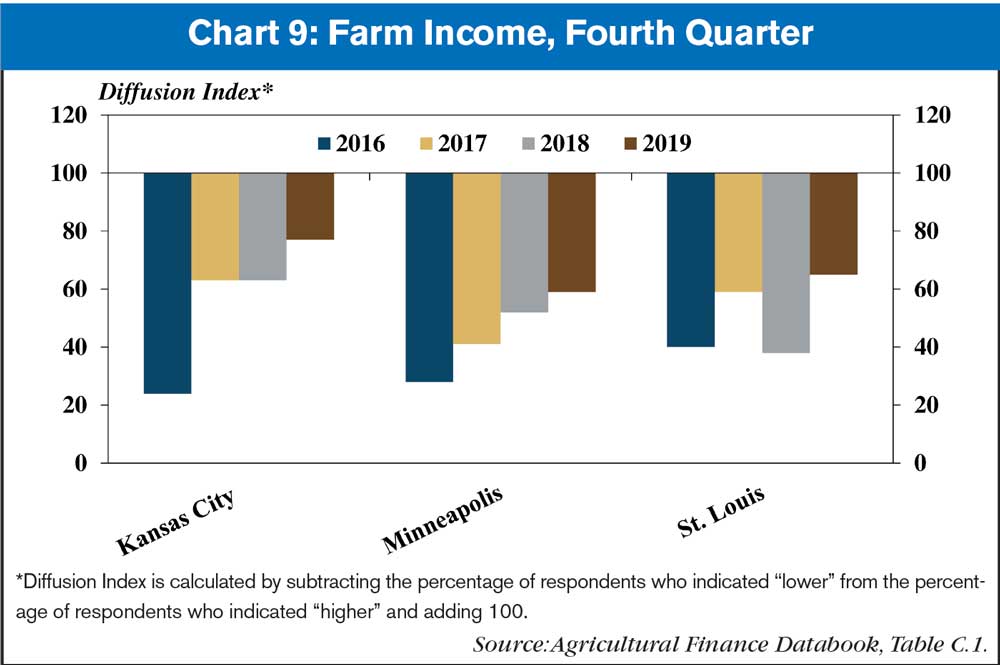 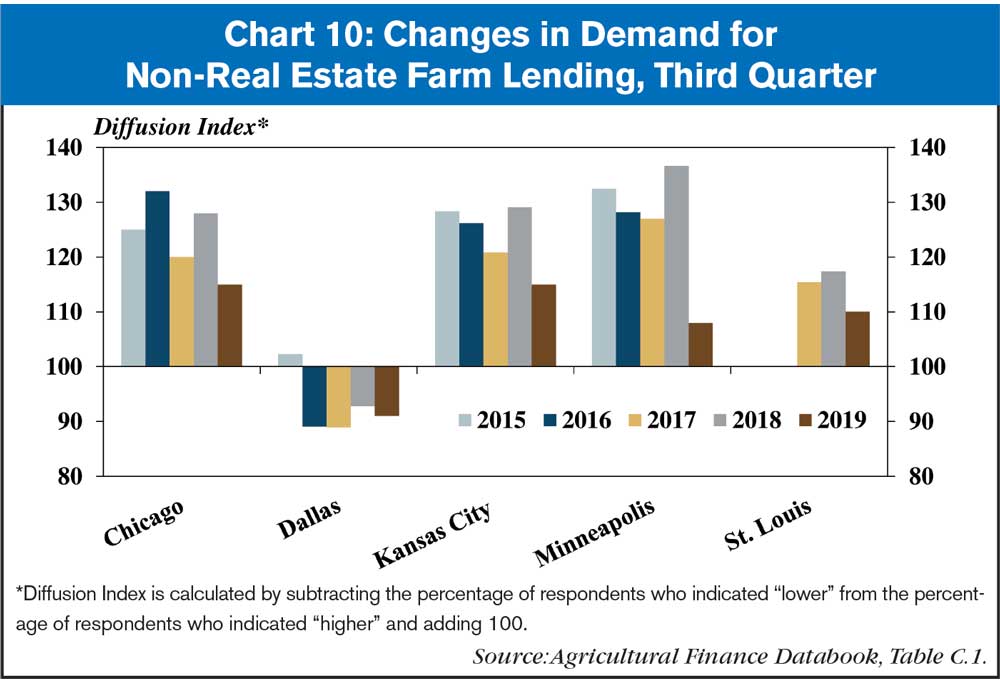 Although lending activity remained elevated, the total volume of new loan originations declined in the first quarter of 2020. Contrary to the overall trend, growth in operating loans increased compared with last year. Although it is unclear exactly how events related to the COVID-19 pandemic will affect farm lending moving forward, demand for farm loans may increase as economic disruptions associated with the pandemic could put additional pressure on farm finances. In the midst of substantial declines in prices for key agricultural commodities in March, the outlook for the farm sector and agricultural credit conditions again may be influenced by support from government programs.

1 All outstanding agricultural loans previously held by Rabobank N.A. no longer are included in commercial bank reporting as of Sept. 31, 2019.