According to a report from Farmdoc Daily, Precision agriculture has become mainstream in commercial agriculture production, and many would agree that it is “the way we farm today.” Utilization of technology varies from farmer to farmer, but the decision to invest in technology is commonly tied to the potential for increased efficiency and profitability.

However, over the last couple of years, we’ve observed an interesting paradox when visiting with farmers who use precision agriculture technologies. Often, we would ask: “What is the economic return from use of those technologies?” That question consistently yields a two-part response:

As part of a recent study[1] entitled “Use of On-Farm Digital Technologies”, we worked with a small group of farmers to develop an approach enabling them to respond to the “what is the economic return” question. The results of this pilot investigation reveal that farmers perceive the net benefits (or contribution to profits) of adopting technologies to be quite substantial, with an almost 10 to 1 benefit-cost ratio. This contrasts with the more conventional wisdom that technology adoption results in positive, but small, returns.

Understanding the value of technology is increasingly important in an environment of narrow crop margins, when deploying technologies to optimize returns is critical. Appropriately, farmers typically adopt digital technologies on an application-by-application basis (i.e., will GPS guidance sufficiently reduce fuel costs to pay for itself). However, the expansion of technology use over time tends to have systemic, cumulative benefits that go unrecognized at the whole farm level. The graphic below illustrates this process. 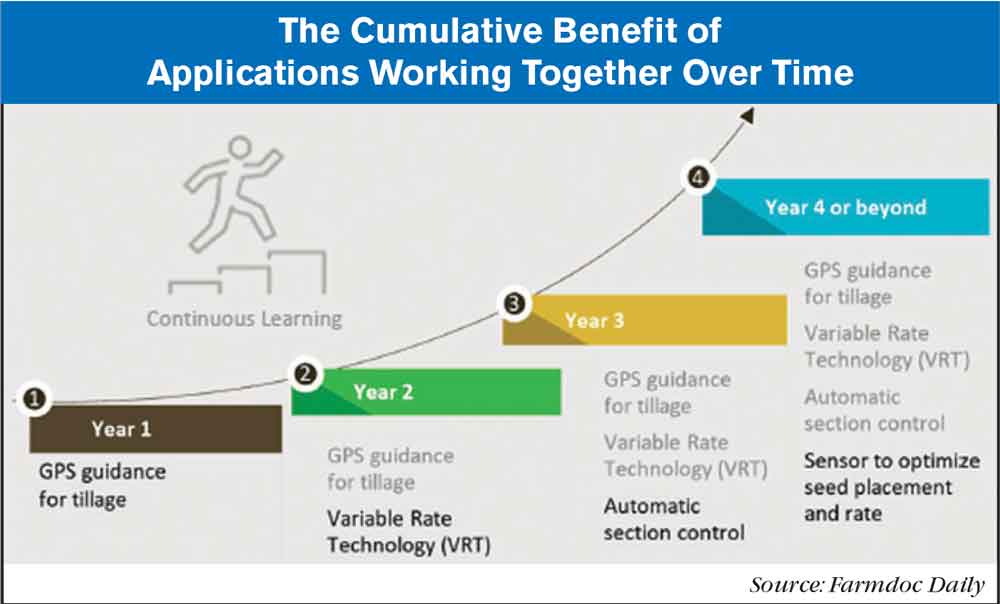 A challenge with quantifying the economic benefits of precision and digital technology adoption is that farmers lack tools and methods that enable comprehensive analysis. Because of the diversity of farm size and practices in production agriculture, comprehensive benchmarking is challenging and typically is not conducted. The systemic benefits and the whole farm effects of employing technologies tend, therefore, to not be quantified. To fill this gap, a benchmarking framework was developed and utilized in the study to help farmers quantify the economic benefits of adopting technologies on their farms.

To test the approach, in-depth interviews were conducted with a small group of farmers throughout the Midwest. The farmers selected for this pilot effort were experienced in digital technology use and could be characterized as early majority adopters. Technology used to support corn and soybean production was the focus of the analysis.

The framework for estimating the economic benefits was novel in that a comprehensive operational review was conducted with each farmer, capturing costs and benefits after careful thought and reflection by the participants. The interview process included the following:

A prototype tool was developed to collect cost and benefit information and to estimate each farmer’s perception of the economic returns from use of precision agriculture. Categories of costs and benefits included:

For this pilot group of producers, the average net benefit (or contribution to profit) was perceived to be almost $90 per acre[2].  The greatest benefits were achieved within the largest size category (greater than 5,000 acres), indicating that there are economies of size to technology application. However, significant returns were also achieved by farmers in the other size categories (less than 1,000 acres and 1,000 to 5,000 acres). The average benefit-cost ratio across the size categories was a robust 9.7 to 1.0. It should be noted that the values incorporated in the analysis reflect the perceptions of the farmer participants. These perceptions were consistent with the decision processes that these farmers employed in considering technology adoption and implementation. Summary results of the analysis are depicted below. 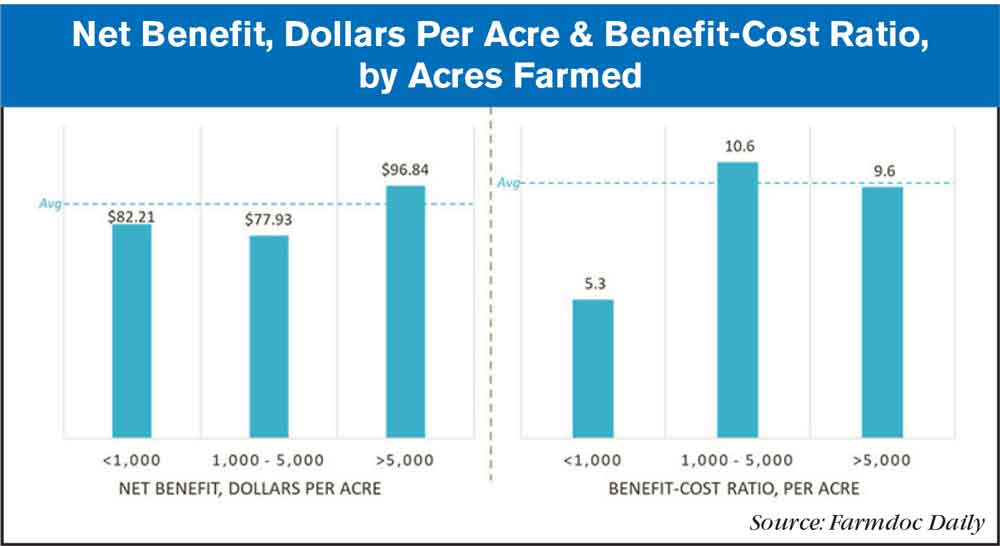 Although from a small group of respondents, these results suggest that the economic benefits of using precision and digital technologies could be much more substantial than conventionally perceived. As new technologies enter the market at an accelerating pace, farmers will need to continually assess technology-based opportunities. Particularly as farmers are coming off a difficult year of low yields and prices, they may be considering means to cut costs. Given the results of this analysis, careful consideration also should be given to the role of technology in optimizing economic returns.

[1] Funded by the United Soybean Board and conducted by Centrec Consulting Group, LLC.

[2] The primary objective of this study was to develop and test a benchmarking tool appropriate for farmer use. Because of the intense nature of the development process, pilot testing was conducted with only ten Midwestern corn and soybean producers.