This week’s dealers on the move include Kingline Equipment and Titan Machinery.

Kingline Equipment, a Florida-based New Holland dealer, has announced plans for a 6th location in Nashville, Ga. It is expected to open in March.

Titan Machinery, Case IH’s largest U.S. dealership group, has acquired the assets of HorizonWest, with the retirement of the dealership’s founding partner. Titan will now be the Case IH dealer in the Nebraska panhandle and eastern Wyoming.

By and large, no-till farmers forecast a conservative approach to adding new equipment to their operation in 2020, especially precision technologies.

Results of the 12th annual No-Till Operational Benchmark Study show that farmers generally plan to scale back use of precision farming tools and services on their cropping operations in the coming year. While many of the changes are subtle, the most significant year-over-year shifts are in planned use of variable-rate fertilizing, down 10% from 2019, variable-rate seeding, down almost 9% and auto-seed shutoff, down about 8%. 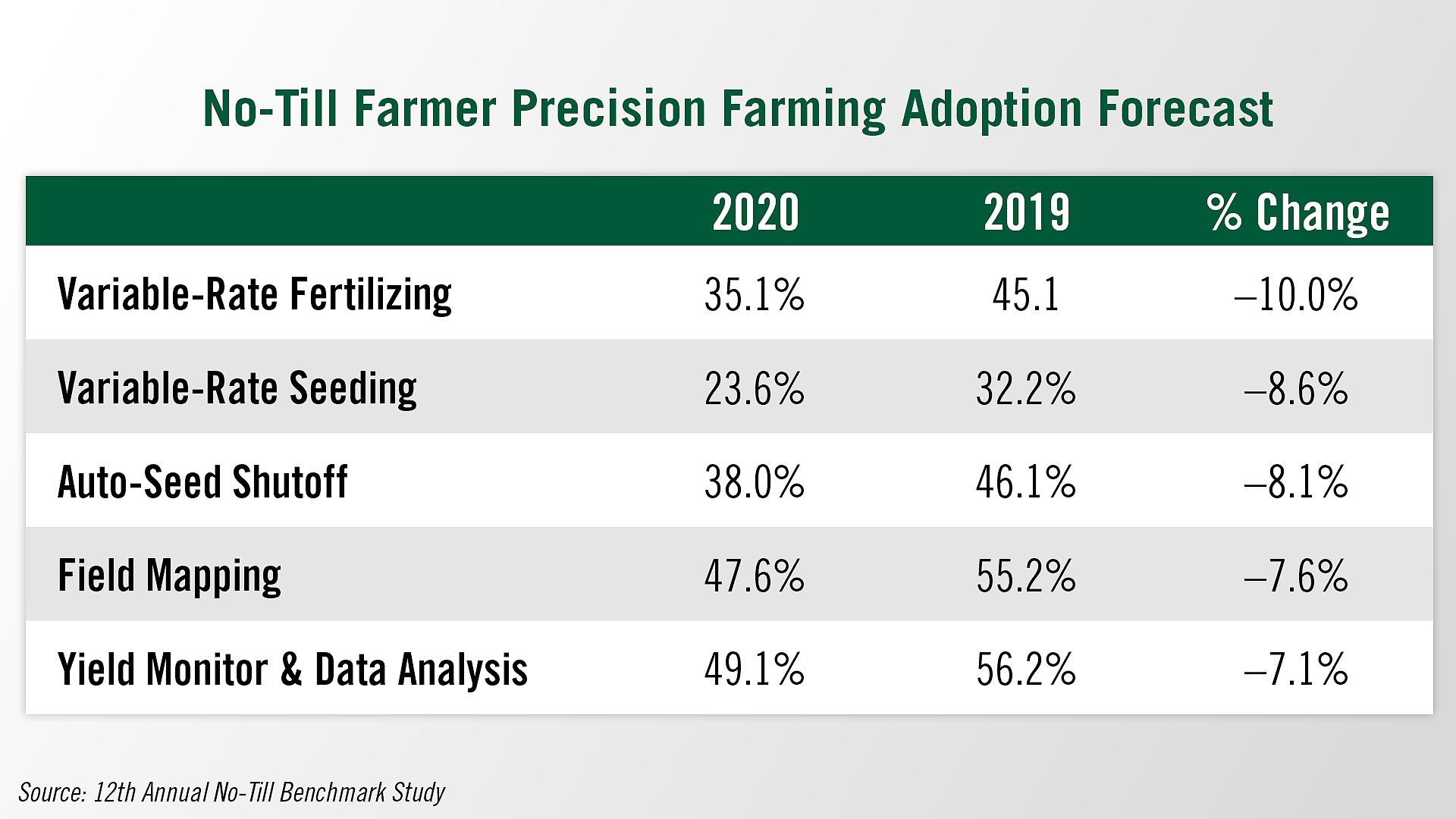 The lone precision area in which no-tillers anticipate increased application is in remote sensing, with adoption forecast to increase less than 1% in 2020.

So how does the broader adoption of precision practices correlate to no-tillers’ expected spending on technology in 2020? Results of the benchmark study revealed that on average, respondents are planning to invest about $1,700 per farm on ag technology. This total is about $900 less than what no-tillers initially forecast in 2019, but about $100 more than the actual per farm average of just over $1,600 reported in this year’s benchmark study.

A category added in 2018 tracks precision service expenditures with respondents spending an average of just over $3,000 per farm that year. The total declined to just under $1,800 in 2019 and forecast to decrease again in 2020 to about $1,400. 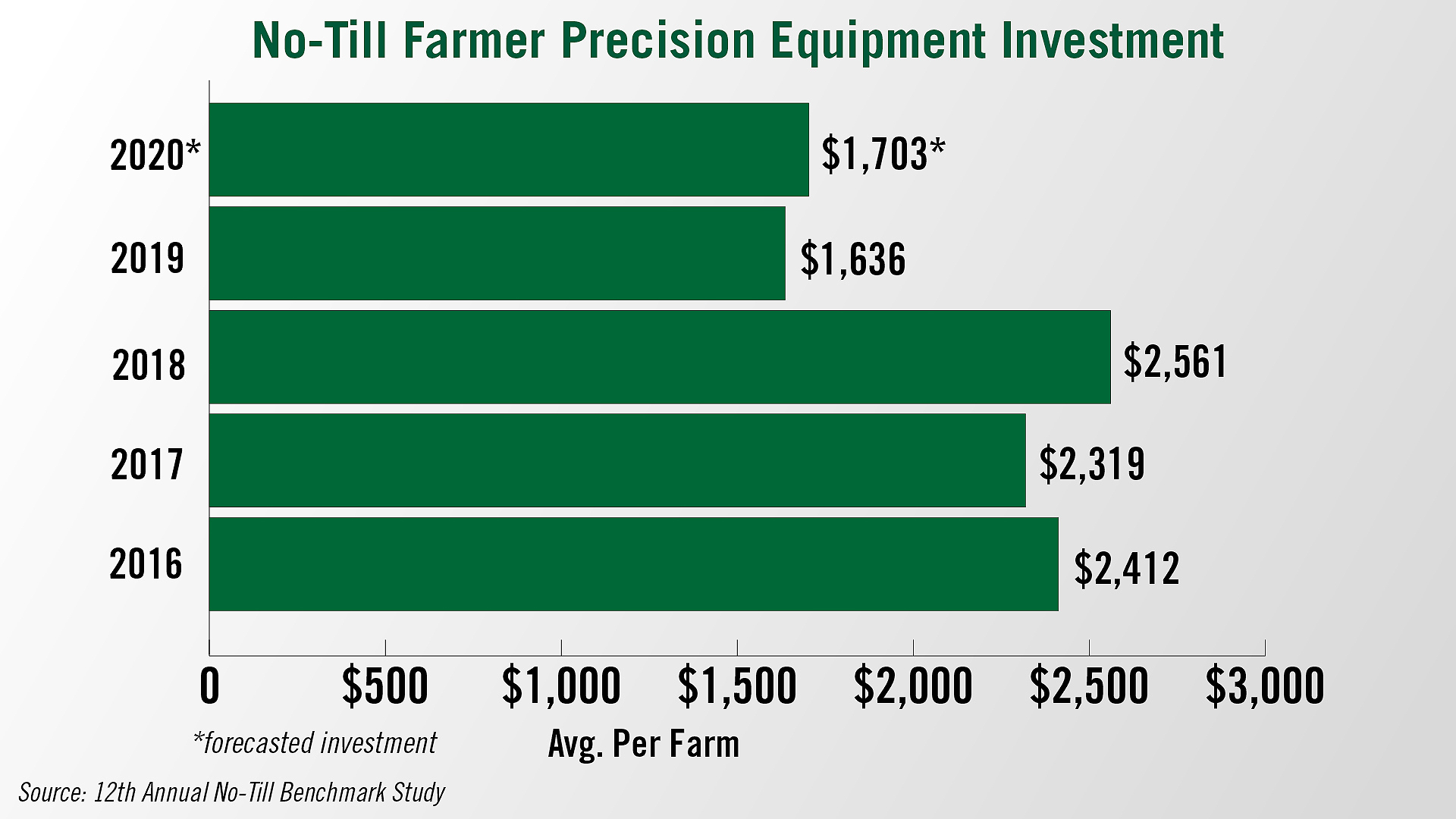 However, it’s worth noting that survey projections made at the start of the year, don’t always coincide with end of the year totals and historically, actual precision expenditures have exceeded initial projections.

According to the most recent update to the European Agricultural Machinery Assn.’s Business Climate Index, Europe’s farm equipment dealer sentiment is on the rise. The index rose 15 points in January to –3, up from –18 in December. This was the largest overall increase the index has seen since early 2017.

The increase was mostly due to a rise in the number of dealers expecting little to no change in future conditions. Only 14% of dealers expected incoming orders to increase, while a record 59% forecasted incoming orders to remain flat. According to CEMA, this reflects dealers’ uncertainty about future conditions and farmers’ equipment purchases in the near term. 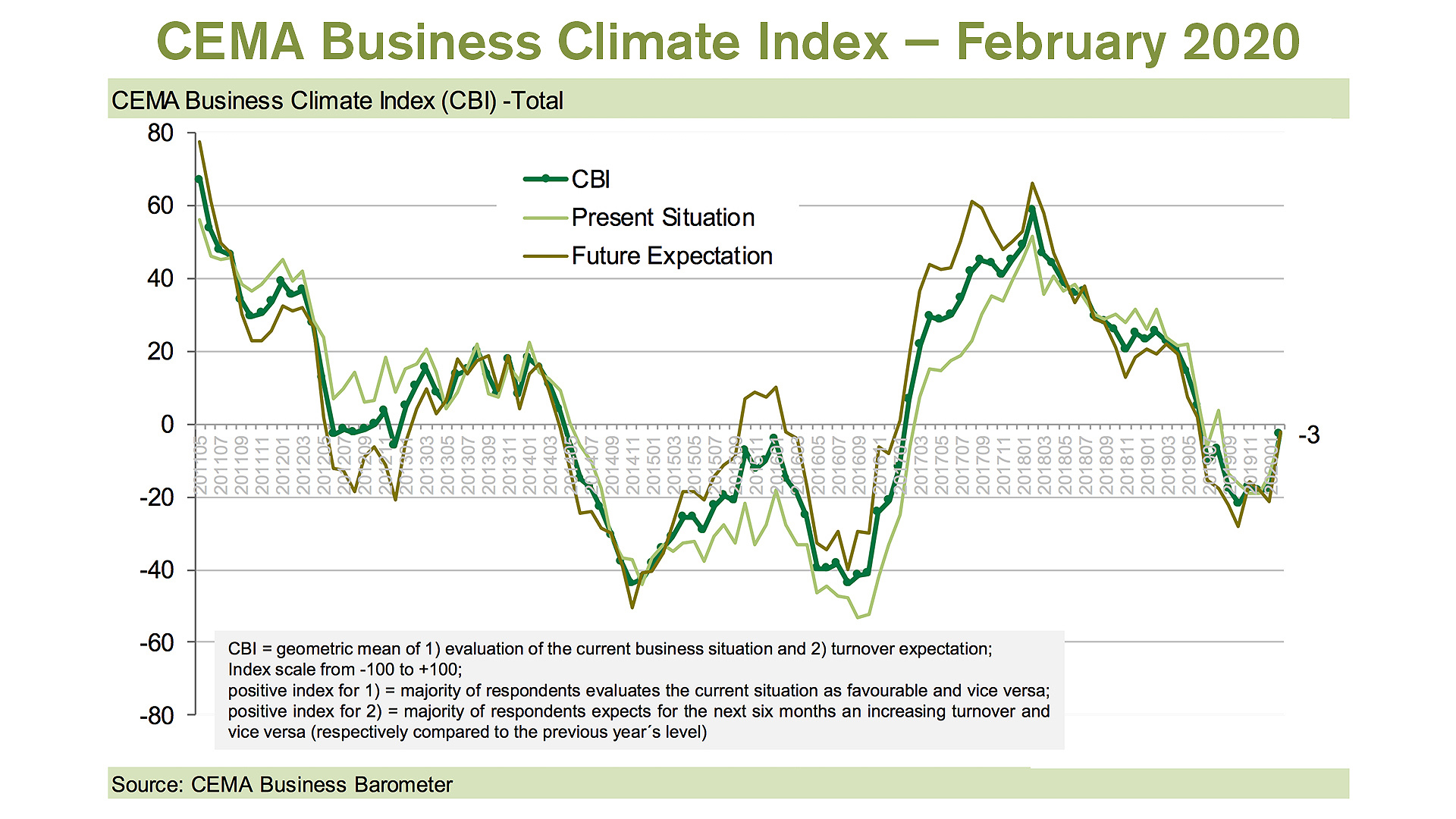 The volume of equipment orders from dealers increased in January, indicating they see good conditions for moving their inventory, the report says. Incoming orders from Europe showed an average increase last month for the first time after several months of decline. European dealers increased their expectations for almost all regions for the second time in a row last month, with Scandinavia at the top of the list and the UK still in negative territory.

Despite ongoing weakness in the U.S. farming sector driven by low agricultural commodity prices, farmland values held steady through the fourth quarter of 2019 in three important farming regions. With more than 80% of farmers’ borrowing power tied to their real estate assets, the resiliency of farmland values is vital to producers’ capital expenditures.

Results of the Federal Reserve Bank of Kansas City’s Ag Credit Survey indicate that strength in the farm real estate markets provided support to the agricultural sector as non-irrigated cropland values and cash rents increased slightly in the fourth quarter. 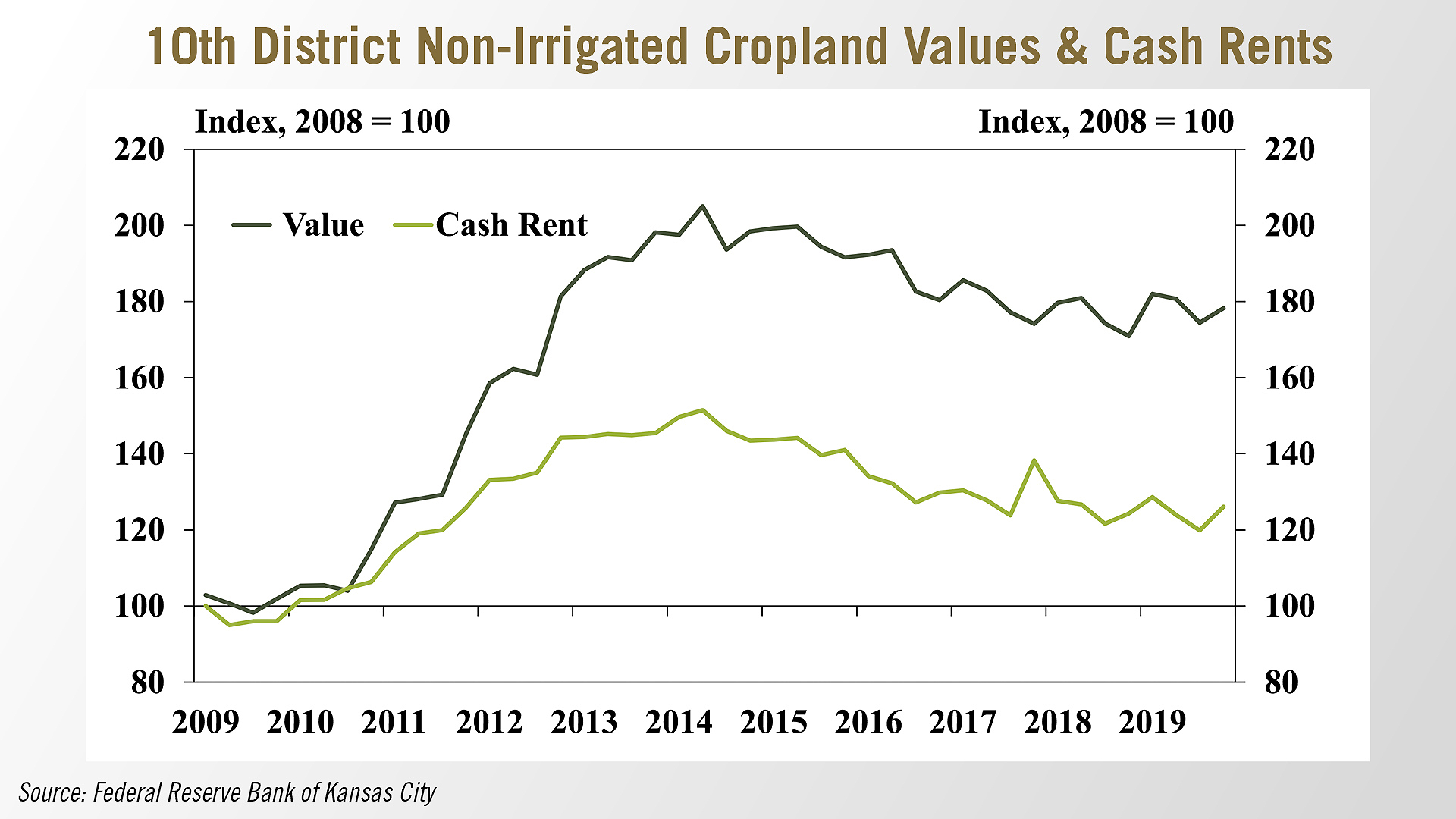 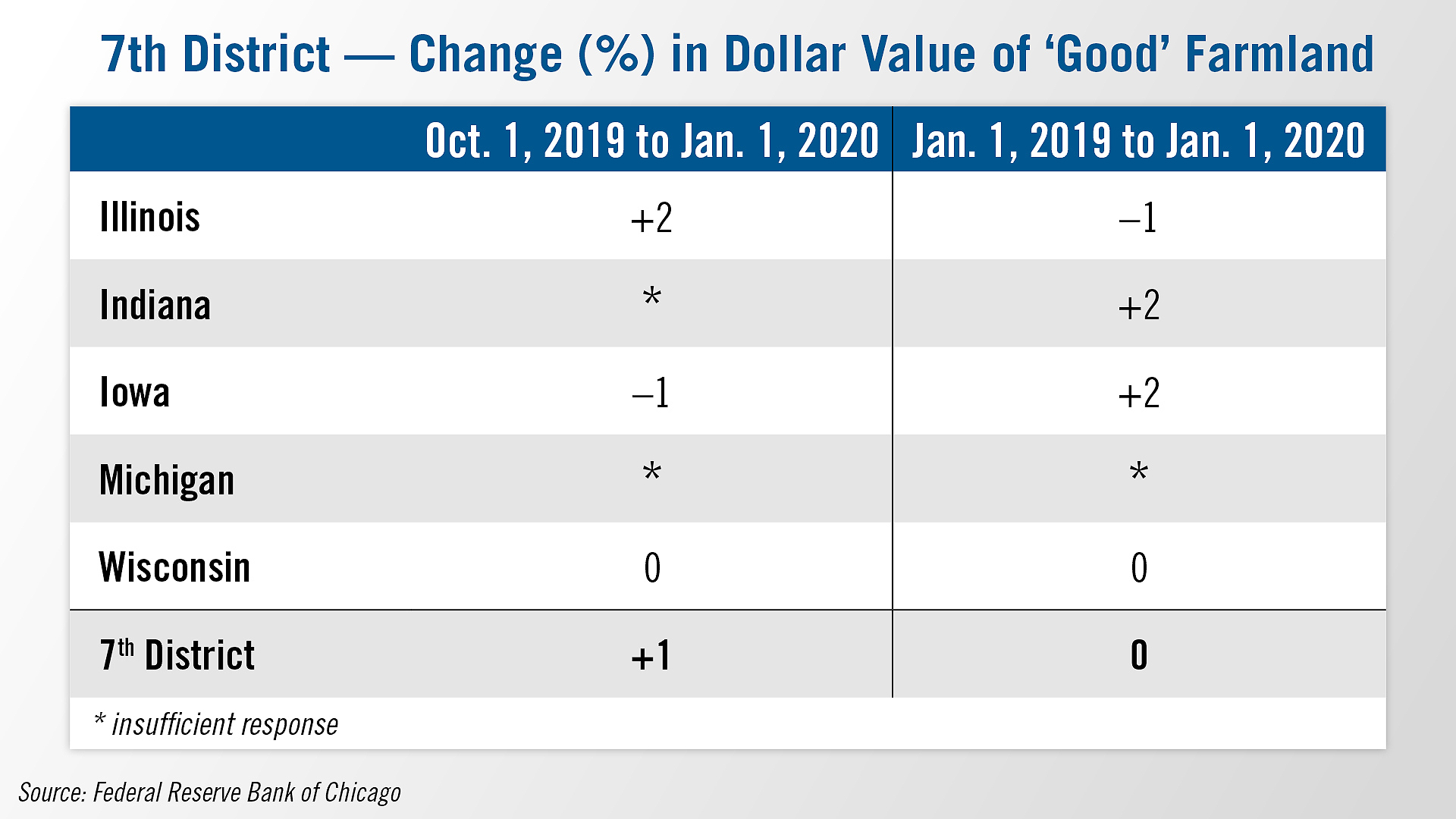 At the same time, values for “good” farmland in the fourth quarter of 2019 were up 1% from the third quarter. Chicago Fed economists report that 82% of the survey respondents expected farmland values to be stable during the January through March period of 2020, while 7% expected them to rise during the first quarter of 2020. A little less than the 11% expected district land values to decline.

Based on the results of its agricultural survey covering the fourth quarter of 2019, the Federal Reserve Bank of Dallas reported overall weak­er conditions across most regions of the Eleventh District. Nonetheless, the value of irrigated cropland in the District stabilized in the last quarter of 2019, while dryland values held steady and ranchland values increased moderately. 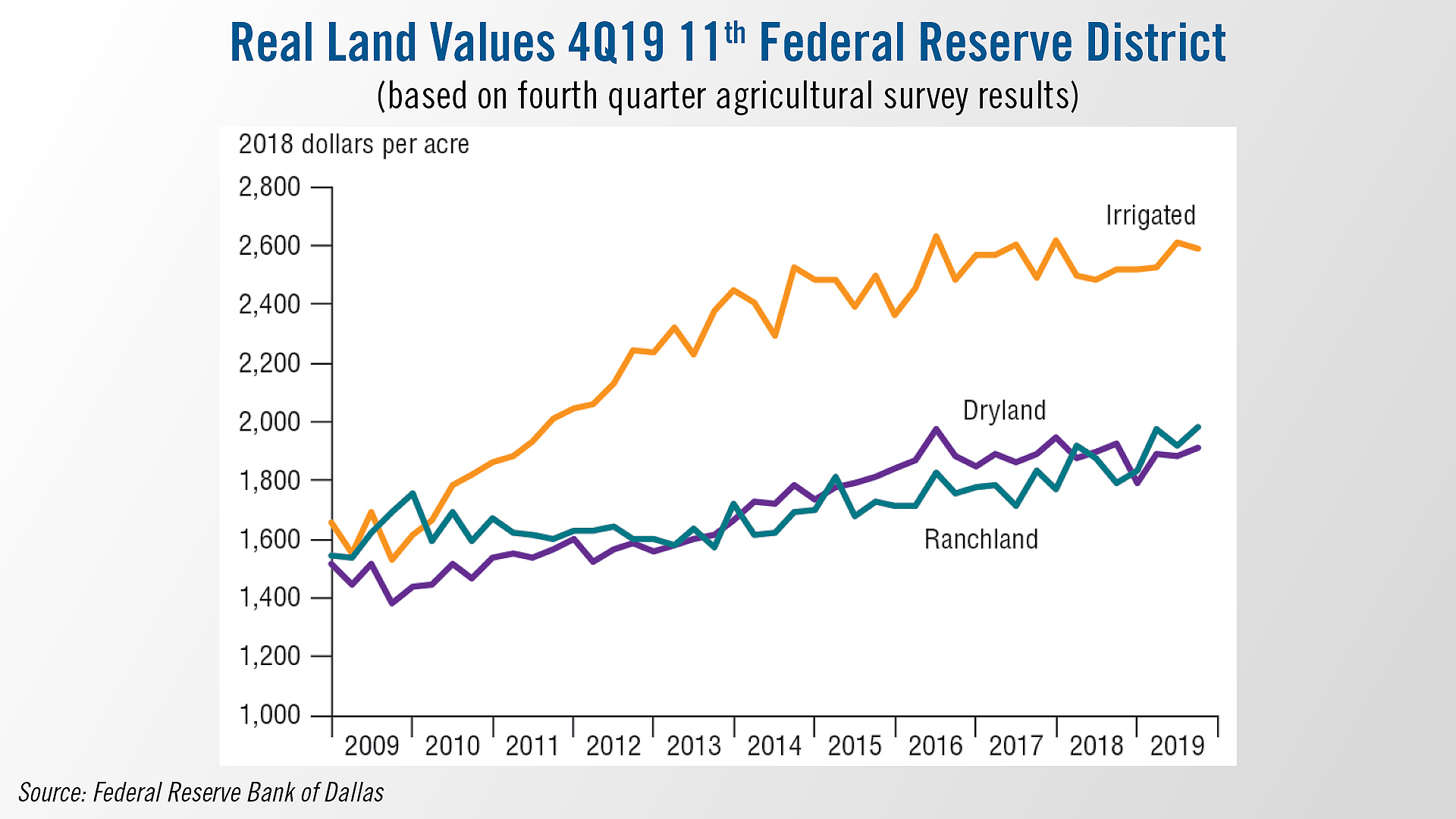 The report goes on to say, bankers who responded to the surveys in both the most recent quarter and fourth quarter 2018, said nominal cropland and ranchland values increased year-over-year in Texas, northern Louisiana and southern New Mexico.

While most commodity prices remain relatively stagnant, dairy appears to be improving. As one Wisconsin banker told the Chicago Fed, “Due to a recent increase in milk prices, I expect to see an uptick in capital investment that was put on hold over the last 5 years.” 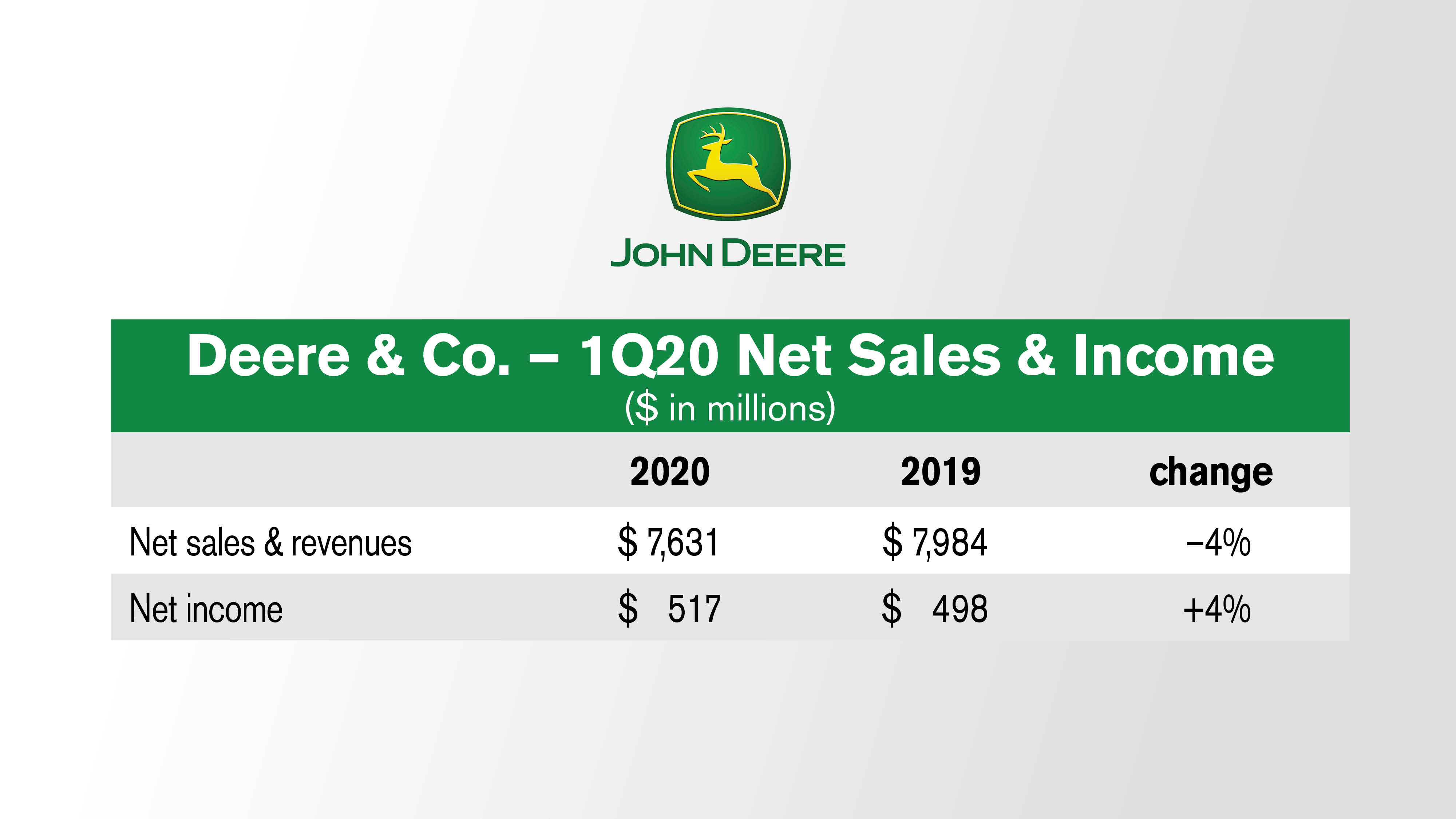 The company reported that its worldwide net sales and revenues decreased 4% in the first quarter ended Feb. 2, 2020 to $7.63 billion. Net sales of the company’s equipment operations were $6.53billion for the quarter, compared with $6.94 billion in 2019; a decline of 6%. 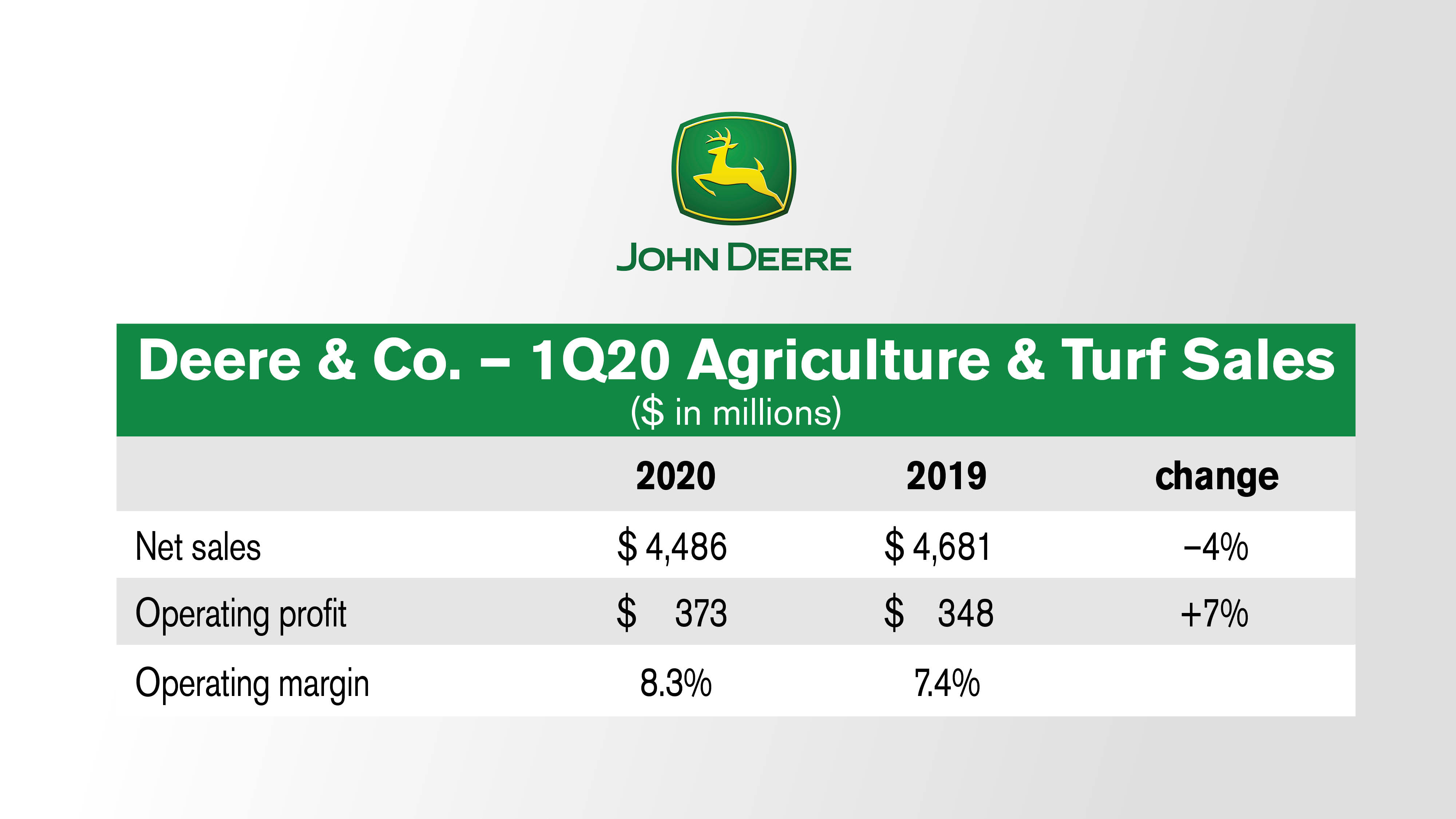 Summarizing the company’s performance during the period, John May, Deere’s CEO, said, “John Deere’s first-quarter performance reflected early signs of stabilization in the U.S. farm sector. Farmer confidence, though still subdued, has improved due in part to hopes for a relaxation of trade tensions and higher agricultural exports.” 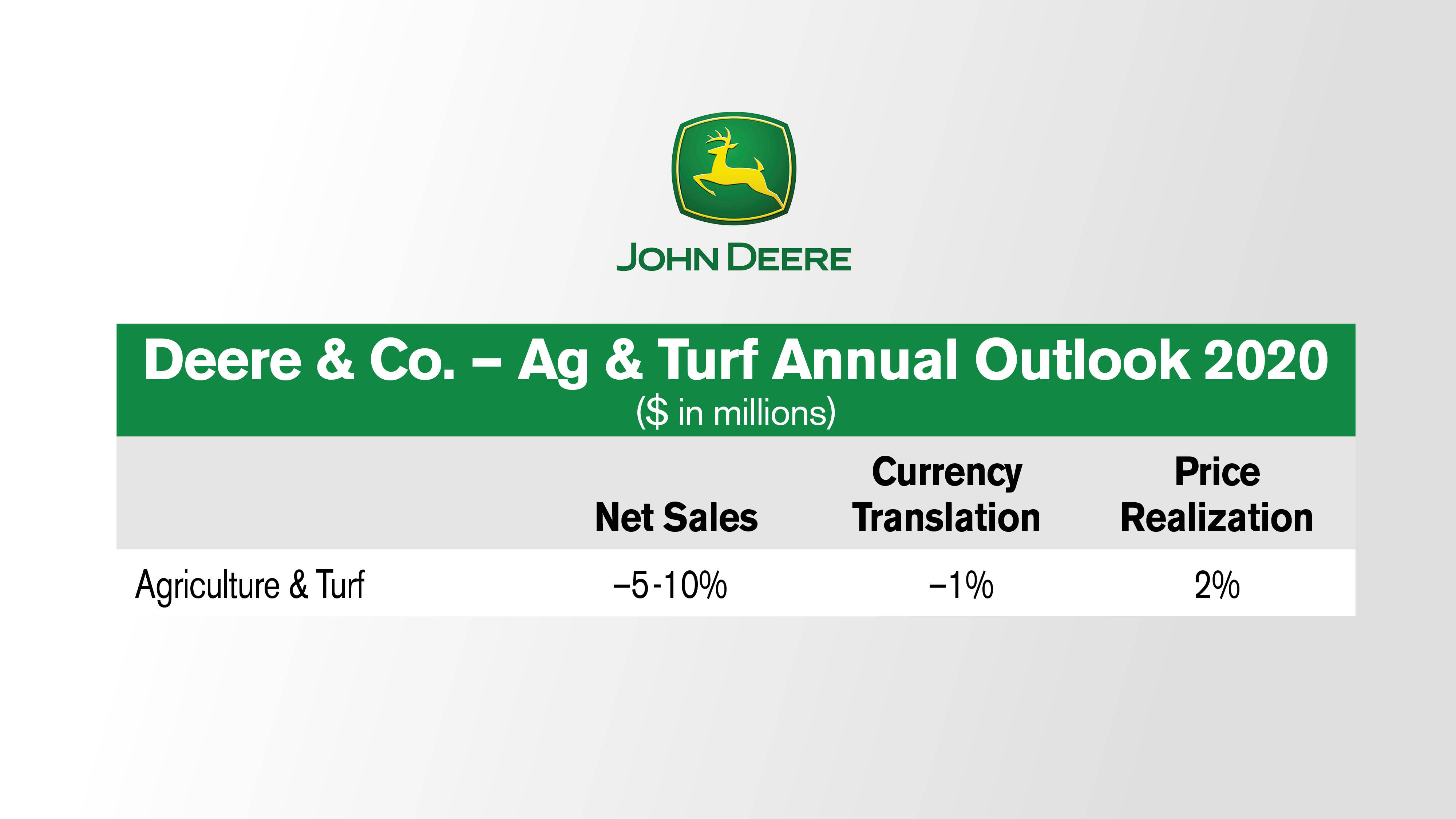 Deere’s worldwide sales of agriculture and turf equipment are forecast to decline 5-10% for fiscal year 2020, including a negative currency-translation effect of about 1 percent.

Westcap is a venture capital and private equity fund manager based in Saskatoon, Sask. The firm has completed more than $1 billion Canadian dollars in transactions in more than 200 growth companies.

Its investment in Degelman is not Westcap’s first foray into the agricultural sector. In addition to its financing of various crop input retailing operations, Westcap also has investments in SuperiorFarm Solutions, which owns Rite Way Mfg. Rite Way’s product lines are similar to those of Degelman, including land rollers, rock pickers and tillage equipment, which are produced in Regina and Imperial, Sask.

Westcap said its investment in the farm implement manufacturer fits its goal of investing in established companies with dedicated employees. Degelman currently employs about 270 people. 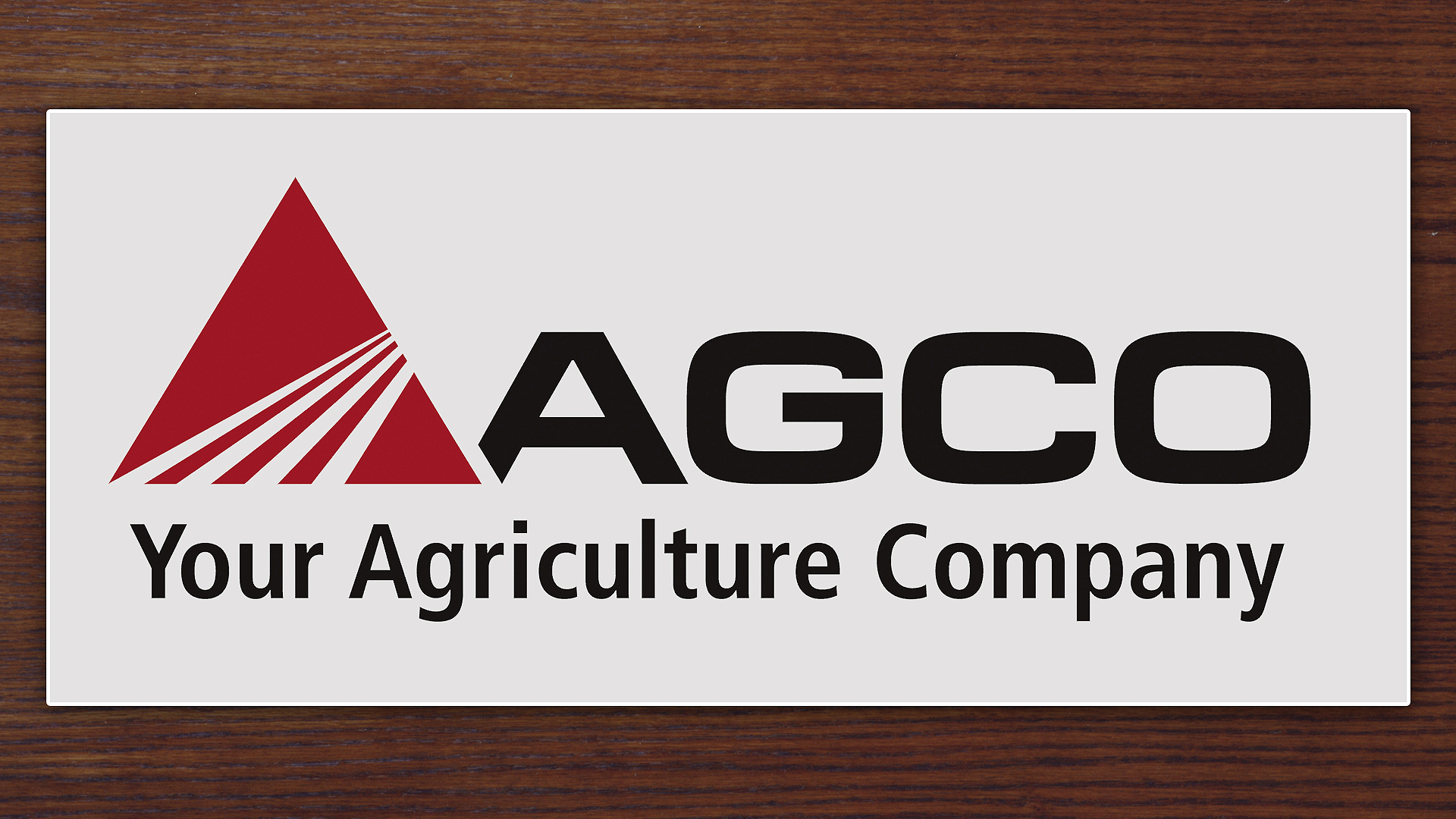 The origin of the AGCO name came about without much forethought. AGCO founder Bob Ratliff told Farm Equipment editors back in 2013 that after acquiring Deutz-Allis from Klöckner Humboldt and Deutz of Germany, they thought they’d call the company the Allis Gleaner Company.

The idea was quickly abandoned when the company handling the bankruptcy of Allis Chalmers  would not let AGCO use the world “Allis” as a prefix without paying a major royalty. Gleaner-Allis and other names were considered, but ultimately they decided on AGCO. Ratliff said they “figured people could translate it any way they wished. Also, it would be first in the phonebook, so the name really was never defined internally in any specific manner.”

As always we welcome your feedback. You can send comments and story suggestions to kschmidt@lessitermedia.com