Omaha, Neb. — Valmont Industries, a global provider of engineered products and services for infrastructure development and irrigation equipment and services for agriculture, has reported financial results for the fourth quarter and full year ended Dec. 28, 2019.

For the fourth quarter 2019, net sales were $683.6 million, a decline of 2%. Lower sales in international markets, particularly in Access Systems and international irrigation, were mostly offset by improvement across North American markets, led by Utility Support Structures. The company reported operating income of $55 million, (8.1% of sales) compared to $36.3 million or 5.2% of sales, largely due to a $7.5 million operating loss in Access Systems given the extremely weak Australia construction market and lower international irrigation sales.

For the full year 2019, the company reported that net sales were flat at $2.8 billion. Value-based pricing strategies, sales from recent acquisitions across all segments and record sales of wireless communication structures and components, were offset by lower Utility Support Structures sales volumes due to changes in product mix and less available production capacity and lower international irrigation project sales. Operating income was $237.7 million or 8.6% of sales, compared to $202.3 million or 7.3% of sales. Profitability was impacted by lower international irrigation project sales and poor performance in Access Systems for the second half of the year.

"Excluding the poor results from Access Systems in Australia, our performance in the fourth quarter was in line with our expectations," said Stephen G. Kaniewski, President and Chief Executive Officer. "In Engineered Support Structures, continued strong demand in North American transportation and wireless communication markets offset approximately $9 million in lower Access Systems sales. Utility Support Structures recognized its most profitable quarter this year and we delivered on our fourth quarter revenue commitment, increasing sales $27 million compared to third quarter 2019. We were satisfied with Coatings segment results despite the slowdown in U.S. industrial production levels. North American Irrigation sales were in line with expectations, while lower project business in international irrigation markets impacted growth. As expected, we generated strong operating cash flow during the quarter."

Kaniewski continued, "As we reflect on 2019, excluding the poor performance in our Access Systems business, our teams performed well. Increased momentum in our infrastructure businesses is supported by a solid backlog in Engineered Support Structures and a record high year-end backlog in Utility Support Structures. Despite lower U.S. industrial production levels in the second half of 2019, our Coatings business delivered good results for the year. Even with the impact of muted net farm income and trade uncertainty, our North American irrigation business performed well, supported by higher sales of advanced technology solutions. Our commitment to balanced capital deployment was demonstrated through strategic capital investments and acquisitions in support of global market growth." 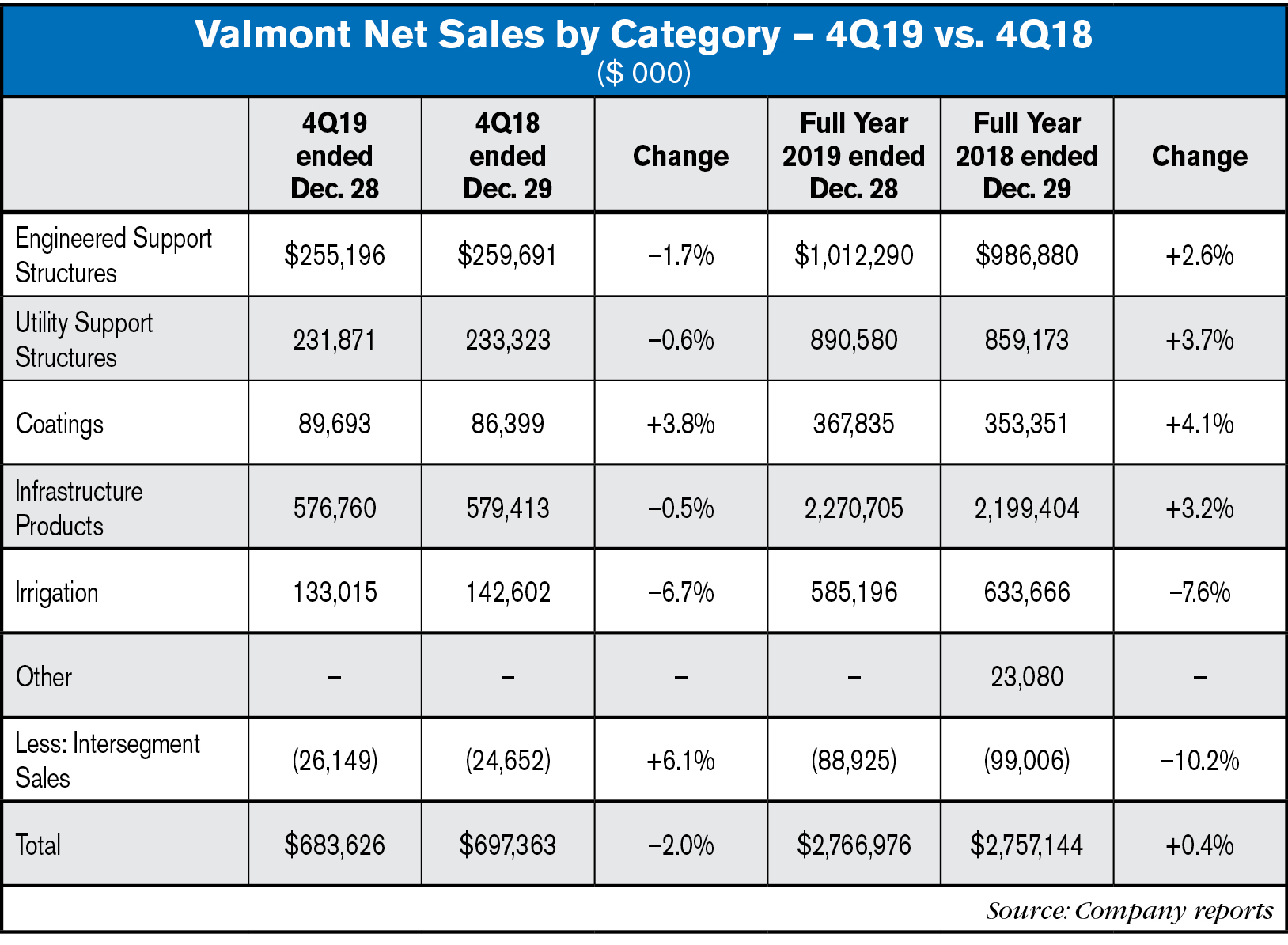 International irrigation sales of $48.5 million decreased 16.1% compared to last year. Higher sales in Brazil were offset by significantly lower project sales in the EMEA region. Sales in Australia and New Zealand markets were similar to 2018.

Irrigation technology sales for the full year, as a subset of total segment sales, increased 25% to $56.7 million compared to fiscal 2018, led by growers' increasing demand for integrated solutions that help reduce input costs and improve profitability.

Segment operating income was $11.8 million, or 8.9% of sales, compared to $14.8 million, or 10.4% of sales in 2018, mainly due to planned higher R&D expense for technology investments and lower international project sales.