Milwaukee, Wis. — New data from the Assn. of Equipment Manufacturers (AEM) and Oxford Economics shows a positive trend in agricultural tractor and self-propelled combine sales for the next several years despite a brief tick down for 2020.

For 2019, the Agricultural Machinery Industry grew a better-than-expected 3.2% to $15.6 billion in 2019 according to AEM Market Intelligence Director Benjamin Duyck, citing data from Oxford Economics.

“Bad weather, trade protectionism and slower growth around the globe were the main impediments to further growth in 2019. Future global slowdowns could reduce food production, putting downward pressure on farmers’ incomes,” said Duyck. “Escalation in the U.S.-China trade dispute could also cause concerns for ag equipment manufacturers. However, despite its limited scope, the recently-passed Phase One deal should provide relief, both for the soybean market as well as overall capital expenditures.” 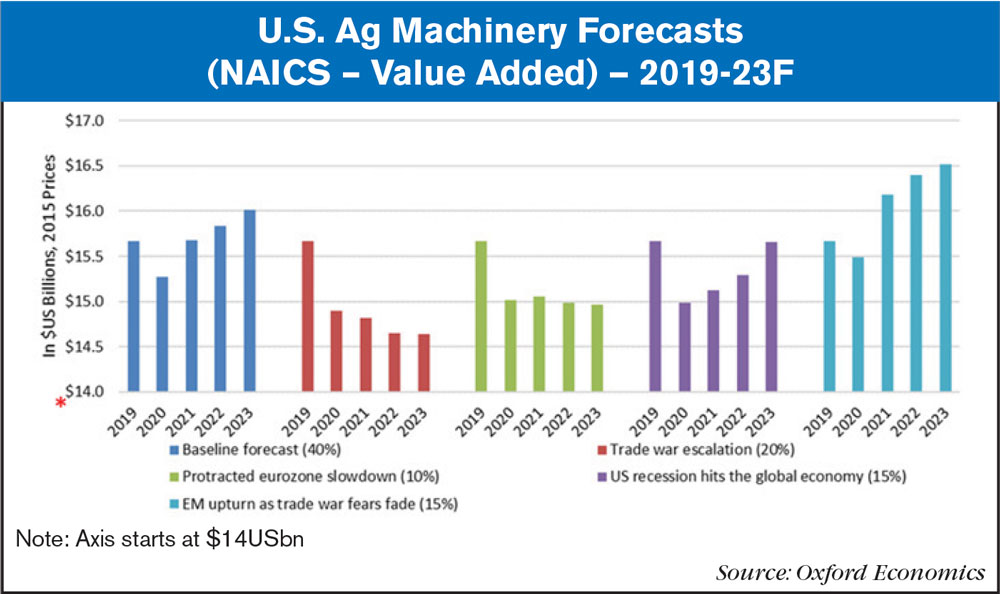 Researchers at Oxford Economics believe ag machinery is looking at a down year for 2020. However, they forecast that slip will turn back around for 2021.  Overall, their most likely scenario of a 2.5% drop looks to be just a 1 year event and not the start of a trend. Projected 1-2% annual growth over the following years would put manufacturers more than 2% above their 2019 performance by 2023.

The worst-case scenario, according to Oxford, is an escalation in global protectionism, which their researchers believe has a 20% probability. In that scenario, ag equipment sales would slide for each of the next four years, with 2023 sales being more than 6% lower than 2019.

However, they also assign a 15% probability of expanded growth occurring if global governments ramp down trade tensions, cutting 2020’s forecast loss in half and putting 2023’s performance more than 5% above 2019.

All forecast models show a drop in 2020 of varying sizes, but both Oxford Economics and Duyck agree chances are better than not that the medium-term trend will be positive.

“With the USMCA having passed in Washington and the Phase One agreement struck by President Trump and Chinese President Xi, we believe one of the more positive scenarios to be increasingly likely,” said Duyck. “While some of the environmental and global economic concerns remain question marks, the trade concerns that were modeled into some versions of the forecast seem to be relaxing.”

In another report from AEM, January 2020 saw mixed results in overall U.S. sales of tractors and self-propelled combines. Total farm tractor sales grew compared to January of last year while combines fell by a quarter, according to the latest data from the Assn. of Equipment Manufacturers (AEM).

“The sales numbers we are seeing for January 2020 are in line with our expectations,” said Curt Blades, senior vice president of Ag Services at the Assn. of Equipment Manufacturers. “With the approval of the USMCA and the announcement of the Phase One trade agreement between the U.S. and China, we believe we are seeing some positive trends on the horizon for ag equipment sales.”